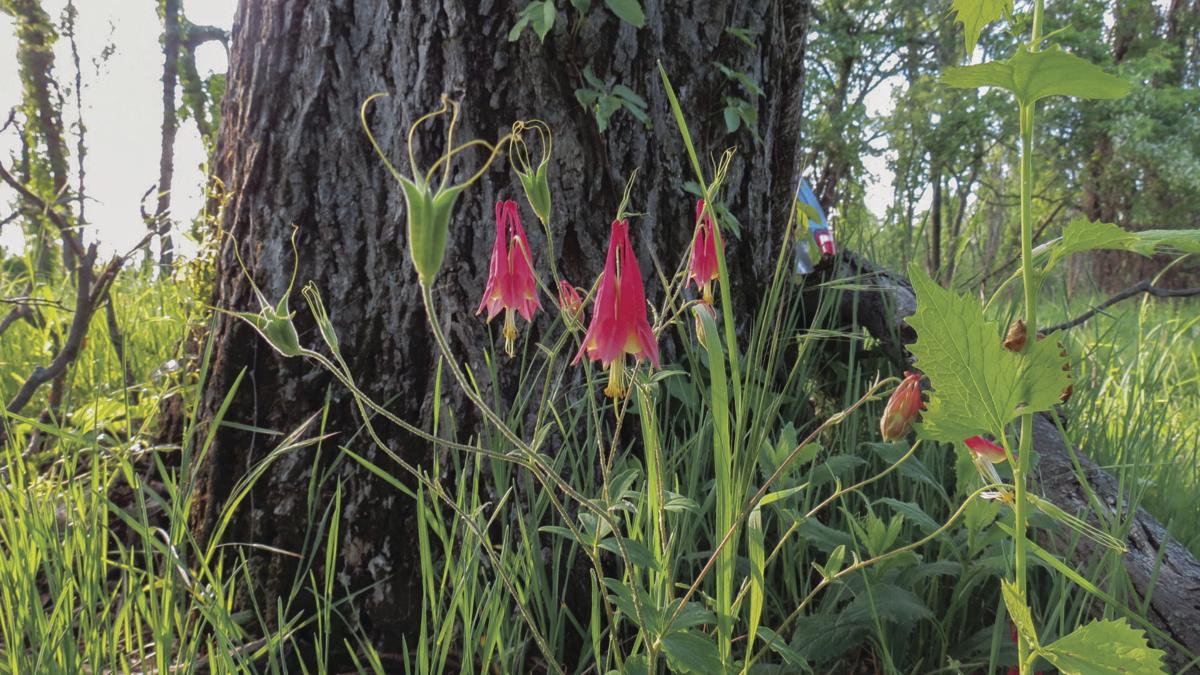 Eastern red columbine hugs the base of a tree on White Horse Mountain. 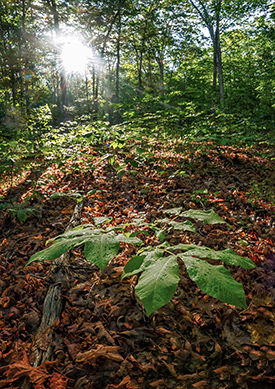 West Virginia’s Division of Natural Resources is maintaining White Horse Mountain as a wildlife area, open to hunters, hikers, birders, mountain bikers and others whose uses align with conservation goals. 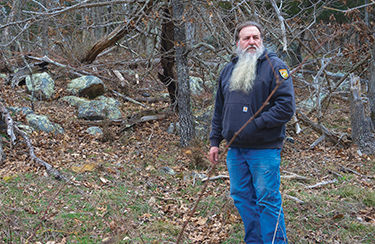 Wildlife biologist Rich Rogers of the West Virginia Division of Natural Resources said the mixture of tree species and ages in the forest is one reason that White Horse Mountain harbors a wide range of plant and animal species.

A view from White Horse Mountain in West Virginia includes the South Branch of the Potomac River. The Potomac Conservancy led a successful effort to save the mountain, now a state-managed wildlife area, from development.

Hugging the slow s-curves of road winding into a mountainous sliver of West Virginia’s Hampshire County, I remembered why they call this portion of the Chesapeake Bay watershed “wild” — and why clean water advocates were desperate to keep it that way.

I was headed to White Horse Mountain, an almost entirely tree-covered heap of rocky hills hugging and draining into the South Branch of the Potomac River. It’s one of the largest undeveloped forestlands remaining in the region, home to rare wildflowers and habitats, hike-worthy vistas and the occasional bobcat or black bear. And it’s only recently been reopened to the public.

Five years ago, the Potomac Conservancy began raising more than $3 million — twice the nonprofit’s annual operating budget — to buy White Horse Mountain and keep its 1,730 acres of hardwood forest, rocky outcroppings and shady streams from being developed into 70 homes. Their fundraising efforts trumpeted the importance of preserving the forest not only because it filters cool, clean water headed for the Potomac but so the public could continue to visit and enjoy the mountain.

“The ability to get onto land that’s [been] conserved — being able to enhance wildlife and having places where the public can get on and experience those animals — is unique,” said Emily Warner, the conservancy’s senior director of land conservation and a West Virginia native.

Last year, after successfully completing the months-long purchasing process and protecting the land from development through a conservation easement, the nonprofit turned the ownership of White Horse Mountain over to the state. West Virginia’s Division of Natural Resources is maintaining it as a wildlife area, open to hunters, hikers, birders, mountain bikers and others whose uses align with conservation goals.

The state played a similar role 15 years ago when a timber company that owned White Horse Mountain leased it to the DNR to be managed as the Springfield Wildlife Management Area. The relic title still appears on the Google Maps label for the green area that includes White Horse Mountain. The area gained a reputation over the years as prime hunting grounds.

“When it got sold to the developer, it was a big loss to the local community,” said Rich Rogers, a wildlife biologist with the DNR who has hunting stories of his own tied to this land.

The land reopened to the public this fall, and the hunters who’d sought deer and turkey in these forests for decades flocked back.

While local hunters might know their way through these woods “like the back of their hand,” Rogers said, the state has only begun its work to make the property more accessible to other outdoors enthusiasts. The division recently hired a wildlife manager to oversee White Horse Mountain and three other wildlife areas, and he’ll be logging plenty of hours at White Horse this spring and summer.

New signs will go up at the entrance, parking areas will be built and roads left rutted by winter hunting vehicles will be restored, Rogers said. In the future, the division will work on removing invasive mile-a-minute vines in the forests and weedy fescue in the fields, replacing them with native species.

But there are already plenty of unique and native habitats to take in during an excursion on White Horse Mountain — as long as you remember it could be a wild one.

“Right now, it’s more like a refuge than a state park,” said the conservancy’s Warner. “It’s similar to other wildlife management areas in West Virginia: no campgrounds or swing sets or ballparks. There are a few trails, but mostly it’s woods and dirt roads.”

“Whatever you can do to amuse yourself with that,” she said, “go for it.”

Just east of the small town of Springfield, Rogers and I turned off Springfield Pike onto Swisher Hollow Road, where a small bridge straddles Abernathy Run. The nondescript road winds past the homes of a couple of private landowners — one of whom has discarded old vehicles and trash along the road, an eyesore that DNR staff say they’ll deal with soon. The road forks twice and we kept to the left, then right, with a gate closing off an old road that made the second choice clear.

Under a late-March sky that was still making up its mind between snow and rain, we decided to drive up a well-trod portion of the road that loops around the mountain. If we weren’t in a sturdy truck, or had better weather and a half-day to kill, I’d say the route would be easier by foot.

The forest around us was a diverse mix of hardwoods with some saplings just getting a foothold along the road. Rogers said that the mix of tree ages is one feature of the property that makes it so appealing to conservationists — and wildlife.

It’s not uncommon to see white-tailed deer and wild turkey in these parts. If the hunting season is open (in the fall for deer and from fall through April/May for turkey), be sure to wear bright-colored clothing and stay on the trails to avoid a hunter mistaking you for an animal. Black bear, bobcats and fishers — a dark-colored weasel that can look like some sort of black panther when it leaps past your headlight beams — are here, too. Rogers and others at the DNR are studying the bobcats and should know more about their activities soon.

Birds like the powder-blue, cerulean warbler, whose population has been diminishing, depend on a variety of habitats, including early successional forests. West Virginia “is a big part of their range,” Rogers said.

“This [younger] age of forest is what we’re really missing in West Virginia, where a lot of our forests have matured,” Rogers said, gesturing to the saplings sprouting nearby. “This is what really seemed to be lacking.”

The diversity of both ages and species of trees on White Horse Mountain is a remnant of its history as a landscape that was, in Rogers’ opinion, well-managed for years by a local timber company. Other pockets of the mountain are home to clusters of black cherry trees, fowl-friendly grasslands and rare rocky habitats that Warner said increase the diversity of plants and wildlife that can be spotted in one small space.

The Nature Conservancy donated eight of the area’s acres to permanently protect one of those habitats, called the Rock Dome Preserve, located on a southeast part of the mountain that’s not easily accessible and not open to the public. A recent study found that the mossy rockface, made of rare sandstone and acidic glades and sandstone cliffs, is likely home to two types of equally rare wildflowers: the imperiled oldfield toadflax and critically imperiled eastern fameflower.

Portions of the rocky area — and a rockface that Rogers said contains a historic shell barren — are visible on a drive-by from Clarence Taylor Road. After taking the long drive up and around White Horse Mountain, pull off the road for a moment here, where it runs alongside the South Branch of the Potomac River, to take in the height of it.

Don’t forget to admire that cool, clear water in the river, for which the mountain was preserved — at least in part — to protect.