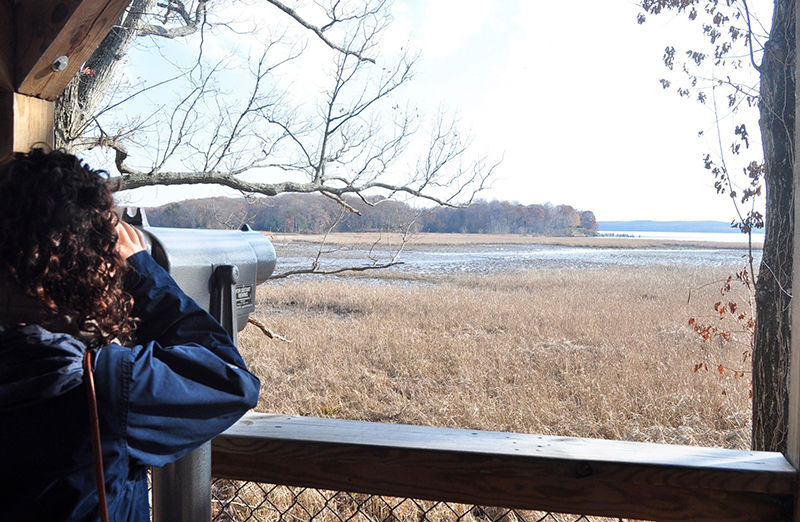 A viewing scope at the Mason Neck National Wildlife Refuge in Northern Virginia helps visitors enjoy closer views of the swans and ducks wintering along the Potomac River. 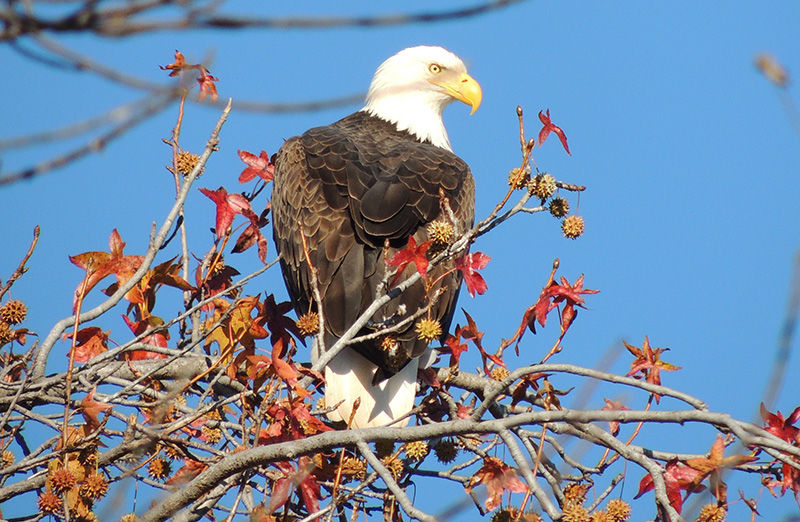 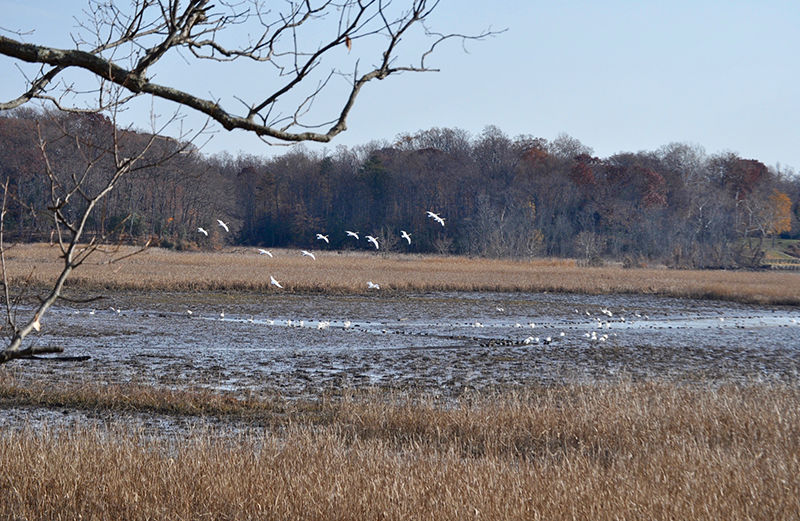 Ducks and swans congregate at the refuge marsh throughout the winter. Eagles are in residence too; their activity picks up in the spring, along with the largest heron rookery in the mid-Atlantic, with more than 500 nests. 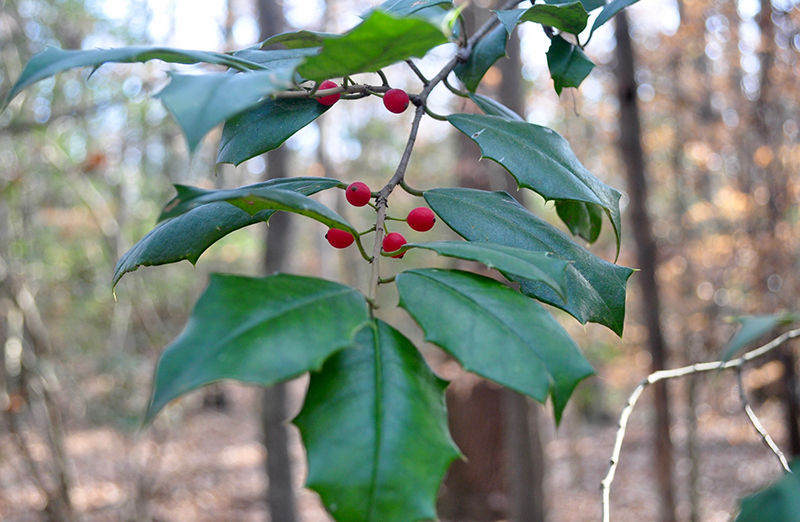 Laid bare of its sound-absorbing foliage, the forest of lanky hardwoods becomes a cacophony of sound. On this cool morning, the leaves crunch underfoot and rustle nearby as a squirrel digs for hidden treasure.

The din of a waterfowl gathering in the Great Marsh, though still a hundred yards away, swells quickly as we walk toward the Potomac River through the woody peninsula. From a sturdy overlook, the geese, swans and ducks come into view. Their quacking, honking and flapping are all we can hear.

Even at these volumes, the Elizabeth Hartwell Mason Neck National Wildlife Refuge is a sanctuary — for wildlife as well as people, who flock to it from the otherwise urban environs of Northern Virginia.

“A lot of our repeat visitors are locals, and most others are from the Greater DC area,” said Amanda Daisey, manager of the Potomac River National Wildlife Refuge Complex, which includes Mason Neck in Fairfax County and the smaller Occoquan Bay and Featherstone refuges in Prince William County. “Most come to the refuge to bird or hike.”

For those in the DC area, Mason Neck is the closest wildlife refuge in Virginia, tucked 20 miles south of the busy beltway in Lorton.

Established in 1969, Mason Neck was the first national wildlife refuge created specifically for the protection of the bald eagle. Earlier that decade, a developer had been eyeing the boot-shaped peninsula that juts into the Potomac River for a planned community and airport. But local resident Elizabeth Hartwell saw that the unadulterated landscape provided important habitat for bald eagles, a recently listed endangered species at the time, and gathered support to preserve it. Congress named the refuge in her honor in 2006.

The refuge’s annual eagle festival celebrates that legacy each May, drawing up to 3,000 people to the site for animal shows, food and live music. Although the bald eagle is no longer an endangered species, the refuge still acts as an oasis for the bird in an otherwise suburban landscape.

“This is still quite a hot spot for wintering eagles along the river,” Daisey said. “Hartwell kind of started the preservation of this whole peninsula.”

The Nature Conservancy initially purchased the tract of land that would become the refuge. Since then, state, federal and local agencies have worked together to preserve almost the entire peninsula that is named for its 18th-century owner, George Mason.

The refuge shares its main access point, High Point Road, with Mason Neck State Park, and people often conflate the two. Parking and hiking at the refuge is free and can be accessed by pulling into a gravel parking lot on the left before reaching the state park. The state park has a $5–$7 entrance fee to access its parking lot, nine trails and playground.

For a wintry walk in the woods, I pulled off High Point Road into a gravel parking lot on the left where a sign indicated I’d landed at the refuge. There are restrooms here and the beginning of the Woodmarsh Trail, a 2.7-mile loop that winds through the spindly woods toward the Great Marsh in the distance. The trail is well-marked, flat and easy to navigate as it juts into the woods and then loops back onto itself.

The leafless trees made the path easy to navigate in the winter, while a few firs and several holly bushes — dotted with the remaining red berries the birds had yet to consume — brightened up the landscape.

“They’re great food in the winter,” Daisey said of the hollies, which gave the walk a holiday vibe.

A wooden footbridge carried us over a vernal pool that, in the spring, will fill with salamanders and frogs — whose calls add another layer of wildlife music.

Even in winter, the forest of Virginia pines, oaks, hickories, beeches and maples, though largely leafless, is still an outdoor laboratory for those interested in the natural environment. The Center for Conservation Biology uses aerial technology to track and count eagles’ nests at the refuge, along with volunteer groups that conduct regular bird counts.

Officials from the Fairfax County Department of Health sample ticks at the property to develop outreach tools about the risk of Lyme disease in the region.

“They do find fewer ticks here than in other parts of the county, because it’s a more natural ecosystem,” Daisey said.

Students from nearby Thomas Jefferson High School for Science and Technology use the refuge as a backdrop for experiments, applying the scientific method as they develop hypotheses about water quality or waterfowl. Carina Velazquez, an intern working with Daisey at the refuge last year, said that seeing students learn in the refuge setting was a highlight of her tenure.

“I’ve learned so much since working here,” said Velazquez, who has a degree in film studies. “I want to create media for wildlife conservation groups.”

The winter woods, with only  a few squirrels in motion, may lack enough cast members for such a film, yet there’s plenty of action in the marsh.

When we reached the expansive estuary, we stepped onto a large wooden overlook to find a waterfowl convention already well attended. Daisey peered through the mounted scope — no coins are required to operate it — to get a closer look and started calling out species: black ducks, mallards and, in the distance, hooded mergansers, northern pintails. The snow-colored swans — their wings reflecting sunlight against an otherwise drab forest background — are hard to miss as they glide, whooping, onto center stage.

“You see this bird party all the way through the winter until they start moving to breeding grounds in March. They’re all talking about it,” Daisey said, grinning. “The swans are the loudest.”

Bring a good pair of binoculars to get a closer view of the action, which is concentrated near the center of the 250-acre marsh, where the water is shallow at low tide. We watched through ours as the ducks’ tail feathers stuck into the air while they dipped below to nibble on seeds and plant roots. Others slept, enjoying the sun-warmed temperature of the mudflat.

In the distance, deep-diving mergansers congregated in a raft to keep warm, taking turns chasing fish against the river’s current.

“I always bring my binoculars down here. You just see water until you put them up — then you see thousands and thousands of waterfowl floating out there,” Daisey said.

The Great Marsh Trail offers even closer views of the waterfowl from another lookout across the marsh. The trail, less than a mile in length, is paved and wheelchair accessible. The High Point Trail, also paved, crosses portions of the refuge and state park as a popular route for cyclists.

Elsewhere on the refuge is a heron rookery that comes to life in the spring and summer as the largest in the mid-Atlantic, with more than 500 active nests. Refuge managers support the large breeding population by controlling water levels in a portion of the adjacent 50-acre wetland to ensure that adult and fledgling herons can forage for food.

Although none of the trails runs up to the rookery, which is protected from the public, great blue herons can be seen spreading their wings throughout the property’s marshlands.

Getting to Mason Neck’s 2,277 acres involves driving past a handful of other historical and natural resource-rich sites worthy of their own day trips.

Gunston Hall is the restored Georgian mansion that was once the center of George Mason’s 5,500-acre plantation on the peninsula. Daily tours provide a historical backdrop for exploring the rest of Mason Neck.

Pohick Bay Regional Park, run by the Northern Virginia Regional Park Authority, is home to a golf course and water park as well as nature trails and overnight facilities.

On the northwest neck of the peninsula, the federal Bureau of Land Management maintains a piece of the preserved landscape: the 13-acre Meadowood Special Recreation Management Area. The property, named for its bucolic meadows, offers horseback riding and mountain biking trails, as well as two fishing ponds.

The long list of resource management organizations working on the peninsula is an example of the collaboration needed to preserve such a landscape so close to the city.

“There’s a lot out there that private partners funded originally when the state or federal government couldn’t,” Daisey said. “As long as one of the partners could come in and grab it, that’s what really matters. This is the end result.”