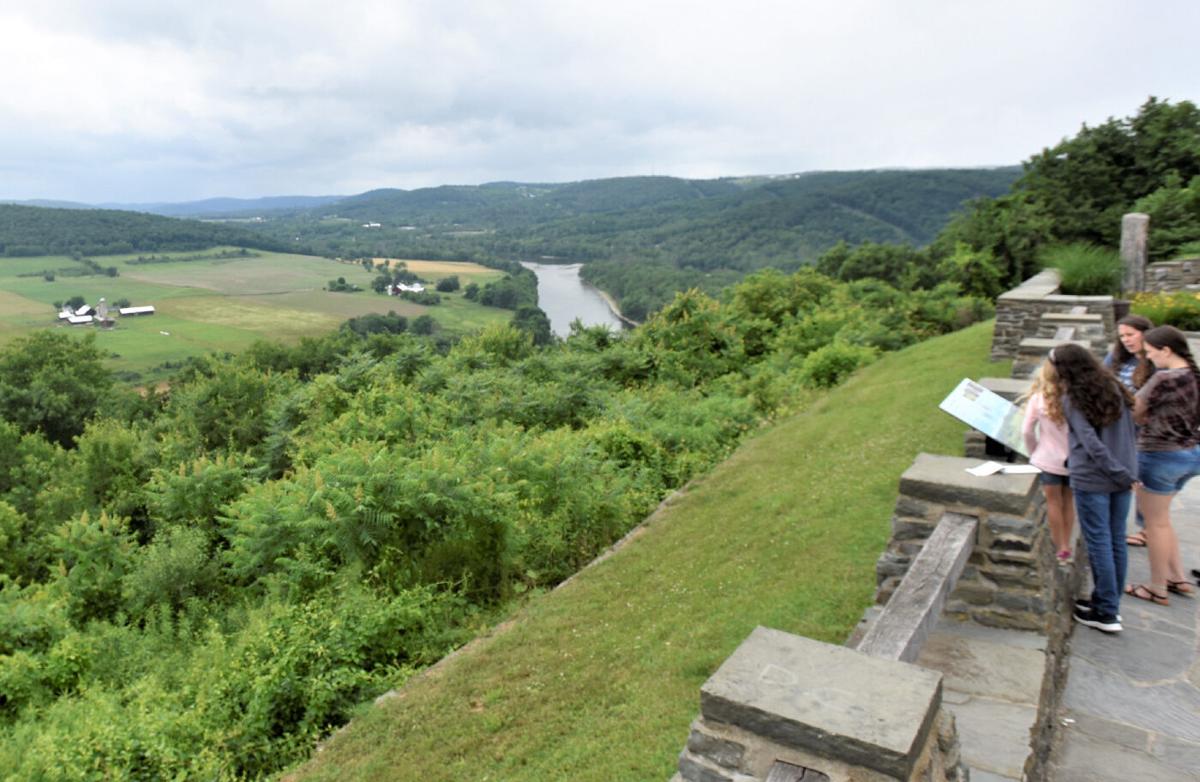 Visitors at the Marie Antoinette Overlook in Pennsylvania look across the Susquehanna River to the site where French nobles once lived in the village of French Azilum. 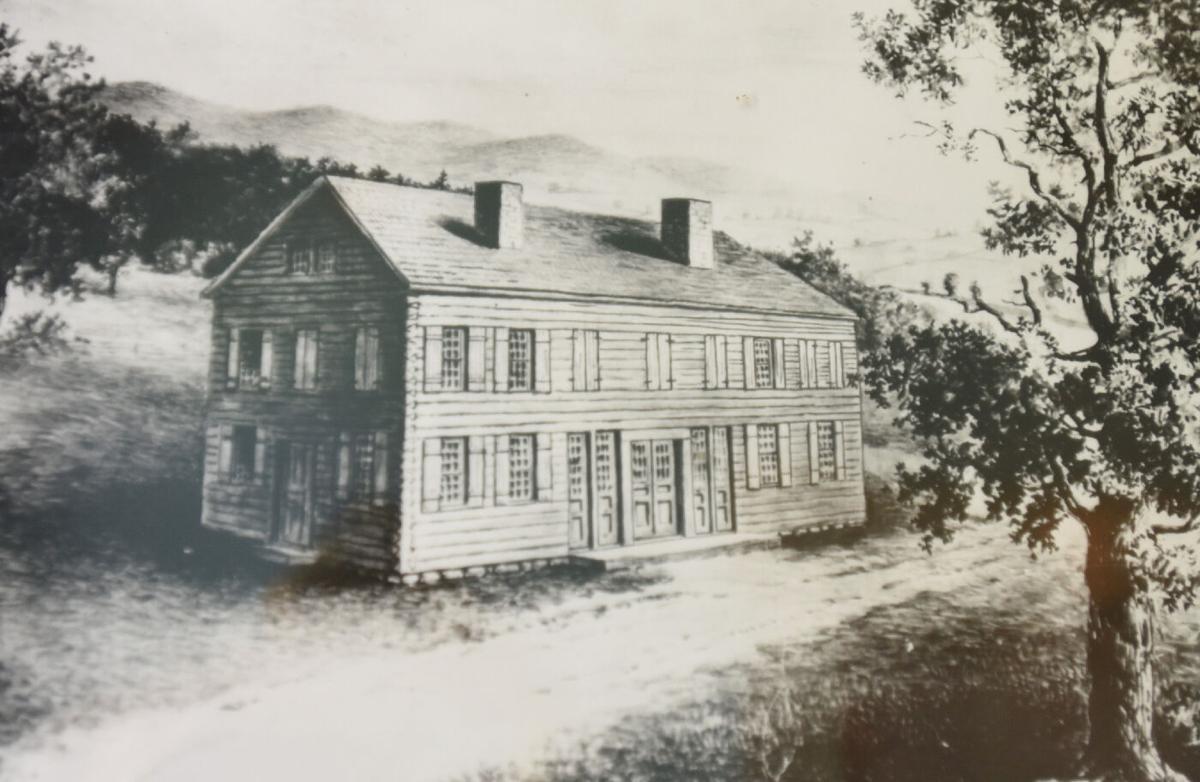 This sketch shows La Grande Maison, which was intended for Queen Marie Antoinette in the Pennsylvania village French Azilum. 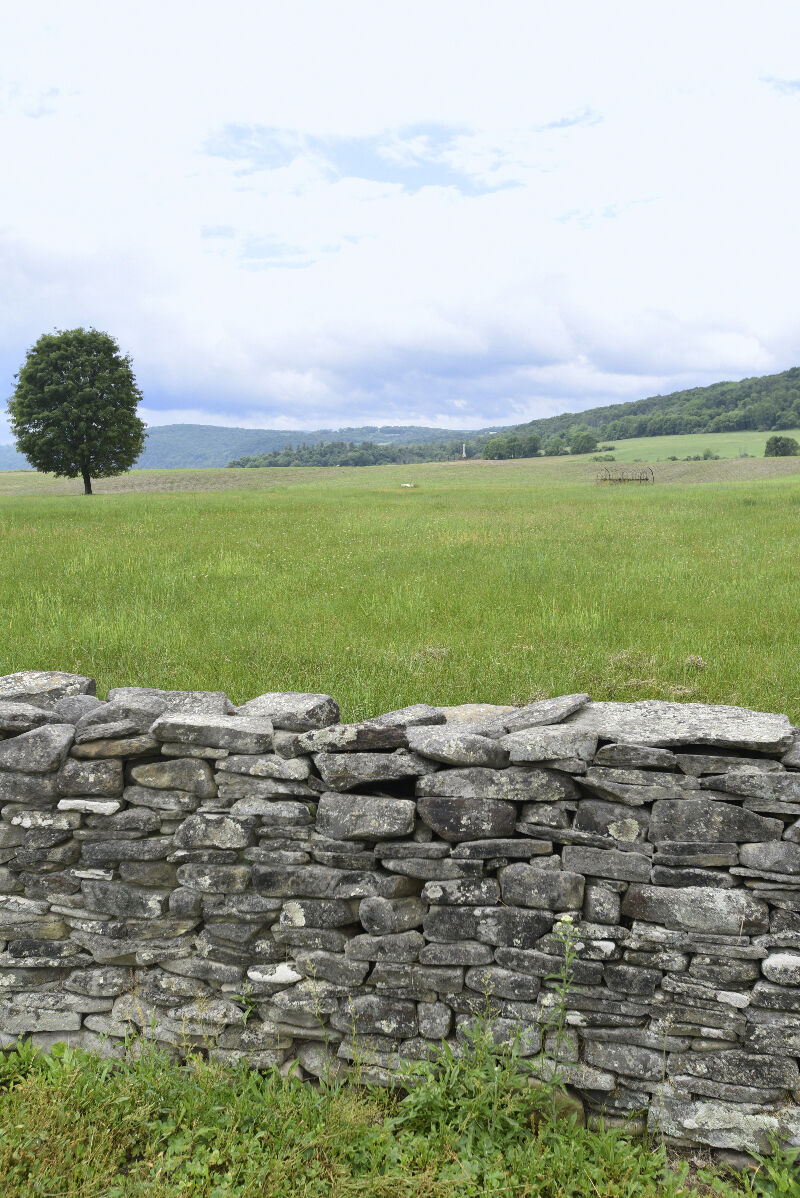 Most of the land surrounding the site of French Azilum, which lays in a bend of the Susquehanna River in Pennsylvania, is now farmed. 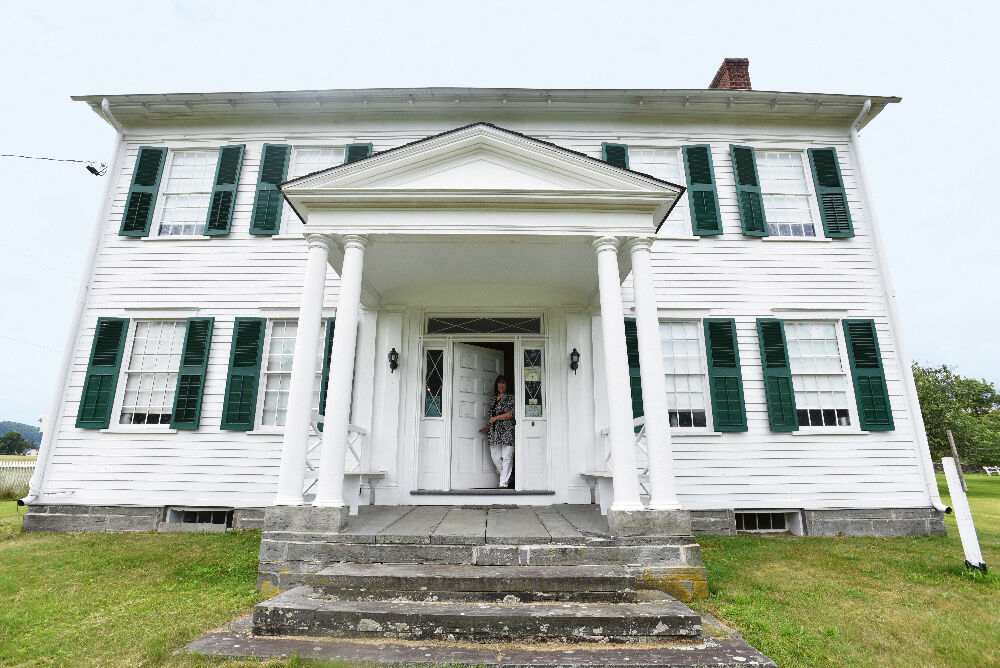 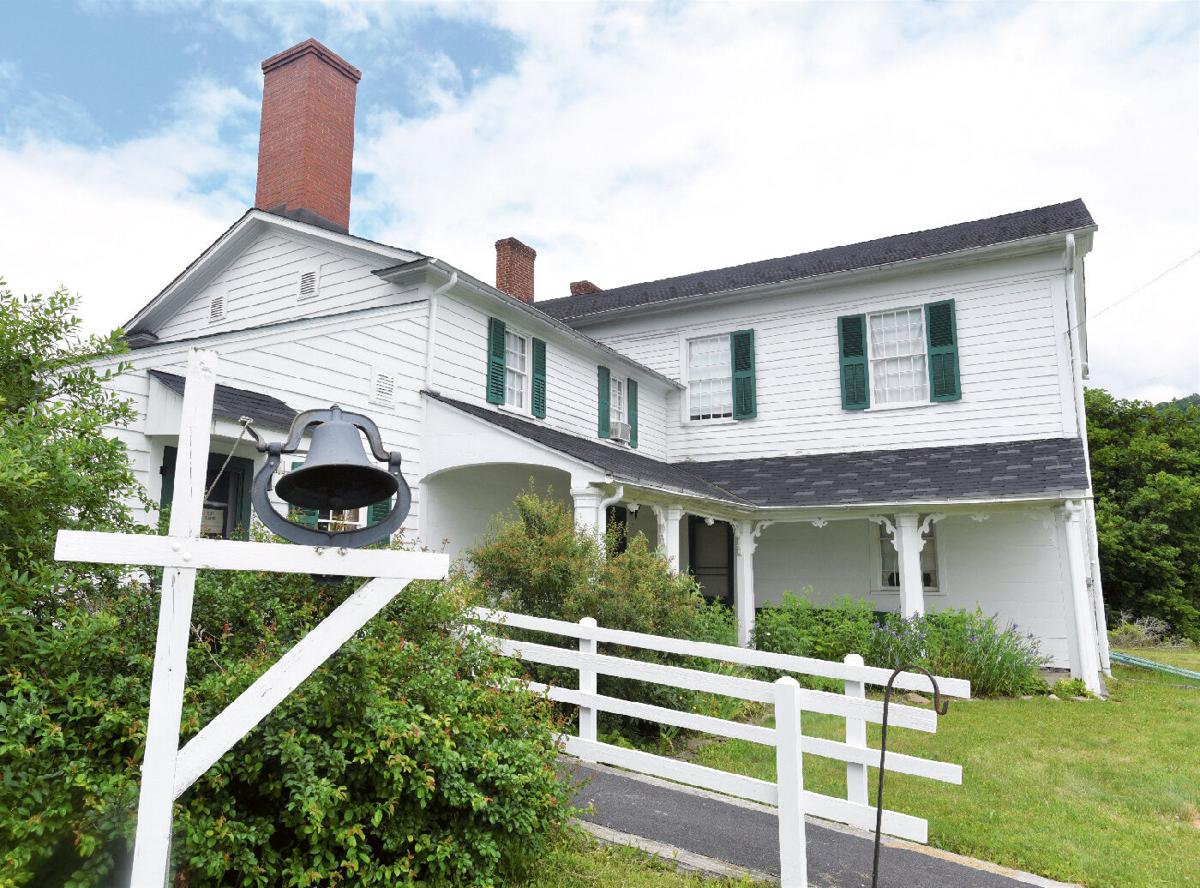 John LaPorte, who was born in French Azilum, PA, built this summer home in 1836 where the village once stood.

One of the quirkiest chapters in Pennsylvania history lies inside a horseshoe bend in the Susquehanna River, plowed under by nicely spaced farm fields.

But 228 years ago, a strange little village rose from the wilderness of what is now called Pennsylvania’s Endless Mountains. About 50 aristocratic families fleeing the French Revolution escaped the guillotine by settling in a pop-up town called French Azilum (pronounced Ahz-EYE-lum). They were joined by wealthy French run out of Saint-Domingue (now Haiti) when the people they had enslaved rebelled against them.

The refugees even designed a grand mansion intended to house Queen Marie Antoinette, wife of King Louie XVI, and their children, but she lost her head before the building began.

La Grande Maison rose forth anyway, a striking three-story building with marble floors, French windows and doors, and black walnut woodwork. In the queen’s absence, it housed town managers and important guests, including Louis-Phillipe, who later became king of France. It was torn down in 1848.

About 50 far-from-rustic two-story homes were built on half-acre lots between 1793 and 1803, each with two reception rooms, two bedrooms, a wine cellar and dining room connected by a covered walkway to a cookhouse.

Though a modest community by aristocratic standards, it was almost the size of the county seat, Towanda.

Local German and English settlers dubbed French Azilum “the Versailles of the Susquehanna.” They kept the reference to themselves because many of them were hired to work at the village and tend fields for the transplanted nobles. Some of the refugees from Saint-Domingue brought enslaved workers with them, who lived in a shantytown by the river.

Approximately 413 lots were planned on 300 acres of the 1,600-acre property, with straight, broad streets. The hope was for a self-sufficient town. But, after only a decade, French sources of money dried up and the Philadelphians who conceived the town went bankrupt.

When Napoleon Bonaparte rose to power and welcomed the expatriates back to France, most of the French families abandoned the town, selling their homes to the locals to use as building materials.

Many sailed back to France. Others headed for Southern cities in the U.S. with large French populations, such as New Orleans and Charleston. Only four families stayed and laid down roots: Homet, LaPorte, LeFevre and Brevost.

All but a single excavated wine cellar are gone, and if you visit French Azilum you will have to use your imagination to envision the scene, not unlike visiting a battlefield. Except for the 22 acres owned by the French Azilum nonprofit organization, almost all of the land is in a handful of large, handsome farms.

After just a decade of existence, this odd nugget of Pennsylvania lore quickly faded from sight and memory so thoroughly that even current historian Deborah DeBilly dit Courville — who traces her ancestry to medieval French King Louie VII — had never heard of French Azilum when she moved to the area 31 years ago from Massachusetts.

“It’s the best-kept secret around,” said Courville, now thoroughly enraptured and well-versed in all things French Azilum. She has written two historical novels set at the short-lived settlement and serves as the nonprofit’s treasurer and events coordinator.

After a brief ownership by the state, the private, all-volunteer French Azilum, Inc., was formed in 1988 to resurrect awareness. They open the site for three tours a day, Fridays through Sunday from Memorial Day through Labor Day.

Creative living-history classes have included open-hearth cooking, themed teas and blacksmithing. There’s even a French flag flying along the river to catch the eye of passing paddlers, with brochures for their edification.

Any tour of French Azilum should begin across the Susquehanna, high on a ridge where the group owns the Marie Antoinette Overlook, along U.S. Route 6. The wide overlook was built in the 1920s and improved in the 1930s by the Depression era Works Progress Administration.

Here, 500 feet above the river, you can see the entire horseshoe bend that the original Iroquois inhabitants called “the meadows.” The Iroquois used the overlook site as a signaling point. Mountains rise gently to the southwest.

Though French Azilum was built in wilderness, it was strategically located with two sides fronting the curving Susquehanna, the main highway for moving and receiving goods at the time. Thus, the monied members of the village could have the furnishings and materials to which they were accustomed shipped by barge.

At the overlook is an expansive panel with a photo of the scene below, overlain with the locations of now-gone landmarks of French Azilum,  including La Grande Maison and the market square, which included a Catholic church, small shops, schoolhouse and theater.

After getting a lay of the land, visitors can make the 20-minute drive across the river to the French Azilum site and its grass parking area. The visitor’s center is a small cabin — built at the same time as the village, but not originally located there and not architecturally representative of the homes of French Azilum.

Here you can watch a video of explaining the history of French Azilum and see some artifacts that were recovered in an archaeological dig.

You’ll learn that the idea for the French refugee retreat was the brainchild of three prominent Philadelphia businessmen, Robert Morris, John Nicholson and Stephen Girard, who saw money to be made. Many Philadelphians thought the city was already overrun by the French, going back to America’s own revolution, said Courville. “I think the feeling in Philadelphia was ‘enough of these people, send them somewhere else.’” So they sent them up the Susquehanna.

At first, the entrepreneurs called the new retreat French “Asylum,” but thought better of it and adopted the French spelling of the word — lest there be any confusion over what kind of a place they were building.

There was a culture gap between the French refugees and their neighbors. “[The local people] thought they were snobs and maybe that they were misplaced, but there was no animosity,” according to Courville.

The visible focal point of the French Azilum grounds is LaPorte House, built in 1836 where La Grande Maison once stood. It was built by John LaPorte, the son of Bartholomew LaPorte, an original French Azilum resident and one of its leaders.

John LaPorte, who was born in La Grande Maison, became a leading citizen in the state, serving as banker, judge, lawyer, state senator and then a U.S. Congressman. A nearby town is named Laporte in his honor.

He had fond childhood memories of growing up in French Azilum. When he decided to build a summer home, he chose to build on the vacant site of the town. Generations of LaPortes lived there for more than 100 years. A small family cemetery fenced in wrought iron, which includes John LaPorte’s resting place, sits just about where the center of the market square once stood. LaPortes’ summer home with a white picket fence facing the river was meant to impress. From the riverfront entrance, guests were greeted by a butler and ushered into one of two reception rooms.

Though built well after French Azilum, here you will find furniture, including a gaming table and a fortepiano with inlaid wood, from the original settlement. There are artist’s renderings of La Grande Maison and other homes, as well as a map showing all the town lots.

Sprinkled generously throughout the home are samples from Courville’s extensive collection of original period garments. In the Marie Antoinette room, for instance, you may find lifelike figures of the queen and an attendant, both dressed in ball gowns from the late 1700s.

The LaPorte House is also stuffed with furnishings from the family’s century of living there. On the grounds, you can visit a blacksmith shop, scale house, stable, smokehouse, wagon house and a display of farm equipment.

In the yard near the summer kitchen is an iron bell. It was used by French settler Joseph Homet, who lived outside French Azilum and ran a ferry and mill. The bell was used to signal the ferry’s departures. A large grist millstone from the original village is also on the grounds.

French Azilum may have disappeared without a trace but there are still some visible reminders. The nearby towns of Laporte, Asylum and Dushore, as well as French Asylum Church and Homets Ferry Road — all have names recalling the town that time forgot.