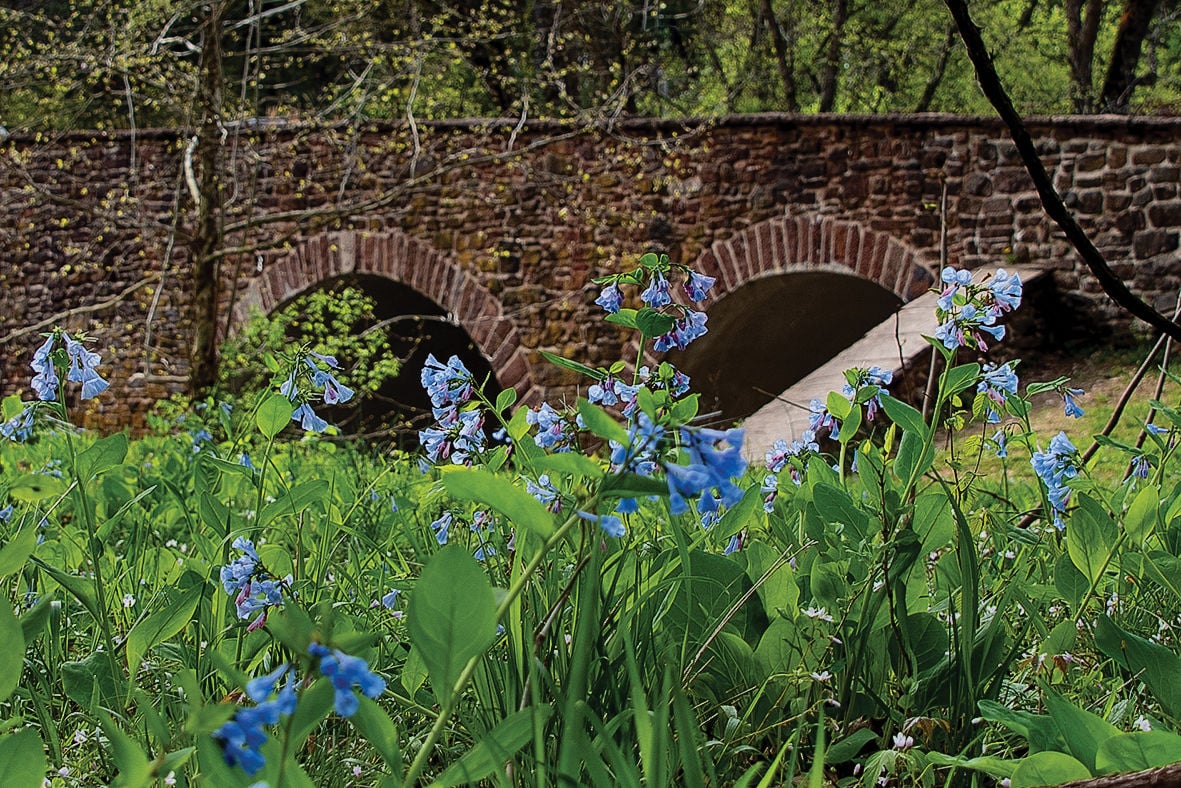 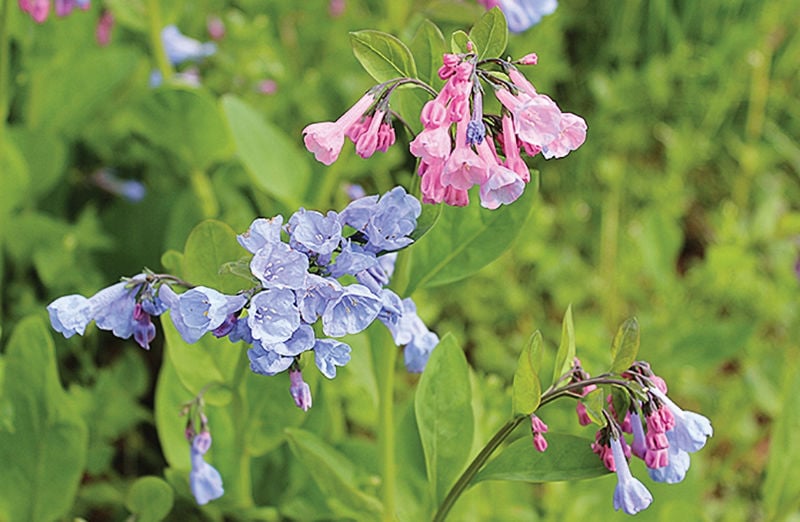 Mature Virginia bluebells are usually blue, but the color of the flowers ranges from pink to purple to indigo, darkening as they mature, and returning to pink once pollinated. 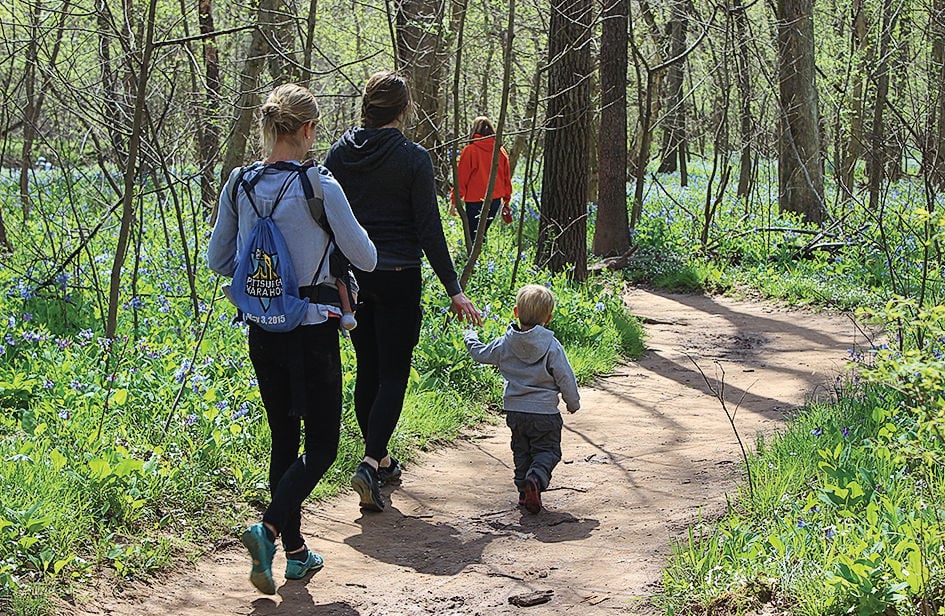 The spring peak of bluebells draws many visitors to Bull Run Regional Park and the nearby Manassas National Battlefield. 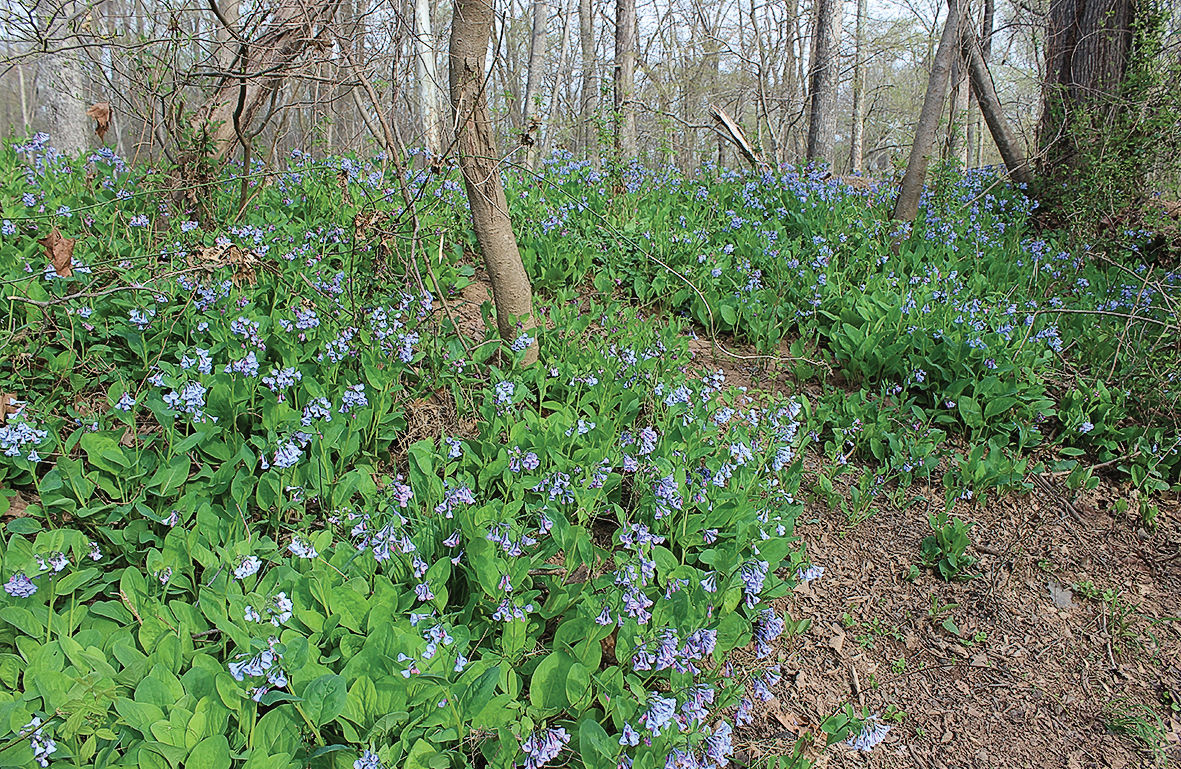 Virginia bluebells thrive in the floodplain of Bull Run, a tributary of the Occoquan River in Northern Virginia that flows into the Potomac River. 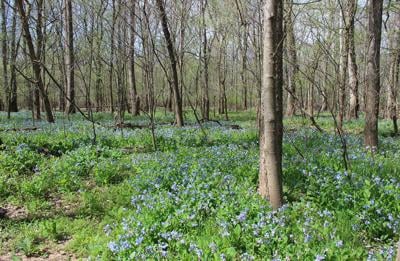 At Bull Run Regional Park in Northern Virginia, the staff starts fielding questions in February. “When will the bluebells peak?” “What if I come next Thursday morning?”

It’s impossible to predict that far out, said park manager Megan Schuster. But it’s safe to say that sometime in the last week of March or the first two weeks of April, millions of bluebells (Mertensia virginica) will be coming into full bloom at the park and paint the floodplains of its streams a luminescent blue.

While the bluebells’ deep purple leaves are pushing up through the warming soil, Schuster and her staff prepare, posting updates on the park’s FaceBook page and on signs directing visitors through the Bluebell Trail loop along Bull Run.

When the bluebells peak, the people will come. And on a lovely April morning, so did I.

I headed toward the creek on a wooden boardwalk that weaves through the moist and messy wetlands, searching for the blanket of blue.

The bright spring light illuminated the furrows of ash and willow. The understory was a palette of pale pink dogwood flowers and tiny green maple leaves.

While the foliage had just begun to emerge, the delicate white blush of spring beauties (Clayton virginica) brightened the dark winter duff and tangle of brown leaves on the forest floor. Their blooms are among the earliest — and longest lasting — of the spring ephemerals. These native flowering plants race to grow, flower and reproduce before the sunlight is dappled, then shaded, by forest canopy.

The boardwalk gives way to a wide, hard-packed trail of river silt, where I traveled the path through the tangle of tree limbs left akimbo by floodwaters, long past and more recent. Here and there, I saw patches of blue flowers, but as the trail approached Bull Run, the clumps thickened into the blue fairyland I’d been expecting.

The water level in the river was low, weaving its way between coarse sandbars with small chutes rippling over coarse gravel.

Signs along the path urge visitors to stay on the trail but, like the river, the paths are braided, as though visitors might have wandered absently, intoxicated by the blue. But in truth, the repeated river flooding makes the task of designating and maintaining just one path nearly impossible.

Those winter and spring floods leave behind the layers of moist, rich silt that help the bluebells thrive.

I knelt for a close look at the inch-long, trumpet-shaped flowers, hanging in clusters from 1– to 2-foot stems that rise from small, oblong leaves. The blue flowers first emerge as pink buds, whose petals unfold and fuse into trumpet-shaped blooms that resemble little bells.

From a distance, the flowers appear sky-blue, but they actually range from pink to purple to indigo, darkening as they mature, and returning to pink once pollinated. The most common color of the mature flower, though, is blue.

Park manager Schuster said, “Part of the fun, for me, is to see how many different colors I can find.”

Bumblebees, honeybees and butterflies feast on bluebells’ fragrant blossoms, and the plant — whose stamen and pistil are spaced too far apart for self-fertilization— relies on these pollinating insects. Most common are the butterflies and butterfly moths that perch on the edges of the flowers while dipping deep into the funnel-shaped centers.

Bluebells, members of the borage plant family, propagate by small seeds that fall to the ground before the plant goes dormant in late May. Seed-spreading ants help with the final cultivation — but bluebells also spread via thick rhizomes that trap stream sediments.

The trail here forms a 2-mile loop. Here and there, the acres of blue flowers are interrupted by patches of other spring ephemerals — the cheerful yellow-blossoming trout lily and the white pendulous flowers of Dutchman’s breeches.

I also spotted a mother and her son sitting on the stream bank in a dense stand of bluebells. I passed another hiker, who nodded and murmured, “Pretty amazing.” The beauty of the cloudless morning had merged with the acres of blue flowers and the timeless sense of spring.

The Bull Run–Occoquan Trail follows Bull Run and the Occoquan Reservoir downstream to Fountainhead Regional Park, and bluebells can be found all along this trail as it weaves through neighborhoods and smaller stream corridor parks that enjoy wide local use, local protection and habitat restoration efforts. Many of these trail sections are part of the Virginia Birding and Wildlife Trail system.

Keith Freeborn, an amateur photographer, lives between the Bull Run tributaries of Cub Run and Big Rocky Run in Centerville, VA. As a member of the Cub Run Stream Valley Volunteer Team, he’s on the trail system multiple times a week, documenting the domestic lives of resident barred and great horned owls and capturing on film river otters, snakes and multiple bird species.

The volunteer team’s FaceBook page is flush with Freeborn photos, which burst with activity in the early spring. Palm warblers, chipping sparrows and other early spring migrants show up just as the bluebells are starting to flower.

“But when the bluebells start to peak, that becomes my priority for about a week, and that’s what I focus on,” Freeborn said. After one outing, he went home to inspect his shots and saw in one of his images a water snake, just inches from his hand, that he didn’t see while taking the photo.

Just upstream from Bull Run Regional Park, the Manassas National Battlefield Park offers easy access to more floodplain trails — and bluebells. Some come to the park, just off Virginia Route 29, to recollect the first major battle of the Civil War in July 1861, when Confederate soldiers sent Union forces in chaotic retreat toward nearby Washington, DC, dashing Northern hopes for a quick victory over the South. Here, too, northern and southern forces met a second time in 1862. A temporary bridge over Bull Runwas destroyed by Union forces once again in retreat. Today, the replica stone arch over Bull Run leads to a boardwalk through the floodplain full of flowering bluebells in season.

Bill and Jeanette Linkons have a clump of bluebells in their garden in Springfield, VA. “They usually bloom a bit before the ones here at Bull Run,” Jeanette said, which is their clue that it’s time for their yearly ritual of visiting the battlefield.

“We come mainly for the bluebells,” Jeanette said. “And it’s just so peaceful here.”

Indeed, the former battlegrounds are peaceful and, at this time of year, reliably blue. The path winds upriver, bluebell clumps snugged next to tree carcasses stranded from another year’s flood. Budding spicebush and redbud trees race the flowering dogwood to bloom. Across Bull Run, the floodplain is a phosphorescent sea of bluebells. Canadian geese honk their way upstream before settling in the shallows, as hikers slowly make their way upriver, heads pivoting up and down for close-ups of the flowers and wide views of the masses.

Forty-five minutes by car to the northeast, David Garcia, naturalist for the Northern Virginia Park System, climbs the ridge at Ball’s Bluff Battlefield Regional Park. Stalking bluebells, he says, is “not always about hiking and covering a lot of ground,” though plenty of folks along this section of the Potomac Heritage Trail may do just that, unaware of the magic unfolding at river’s edge.

On the ridge overlooking Hutchinson Island, a sliver of land that slices the Potomac in two, Garcia comes for a whole different perspective. From his perch above the floodplains, he sees the bluebells below, but he’s also at eye level with the treetops and the raptors soaring the updrafts from the river. This lends itself, he says, to some wonderful, quiet moments along a trail that is never very crowded. “I’m in no rush to go anywhere, I’m just captivated by the quiet and the sound of the wind and the river.”

The leaves of Virginia bluebells turn yellow soon after the flowers have finished blooming and are gone by late June, so you’ll need some advance planning and flexibility to witness the showy peak of these springtime blossoms.

Though the loss of wildlife species and their habitat can overtake one’s sense of optimism for our natural world, visiting an extravagant expanse of bluebells offers a perfect antidote.

Resources for your visit: