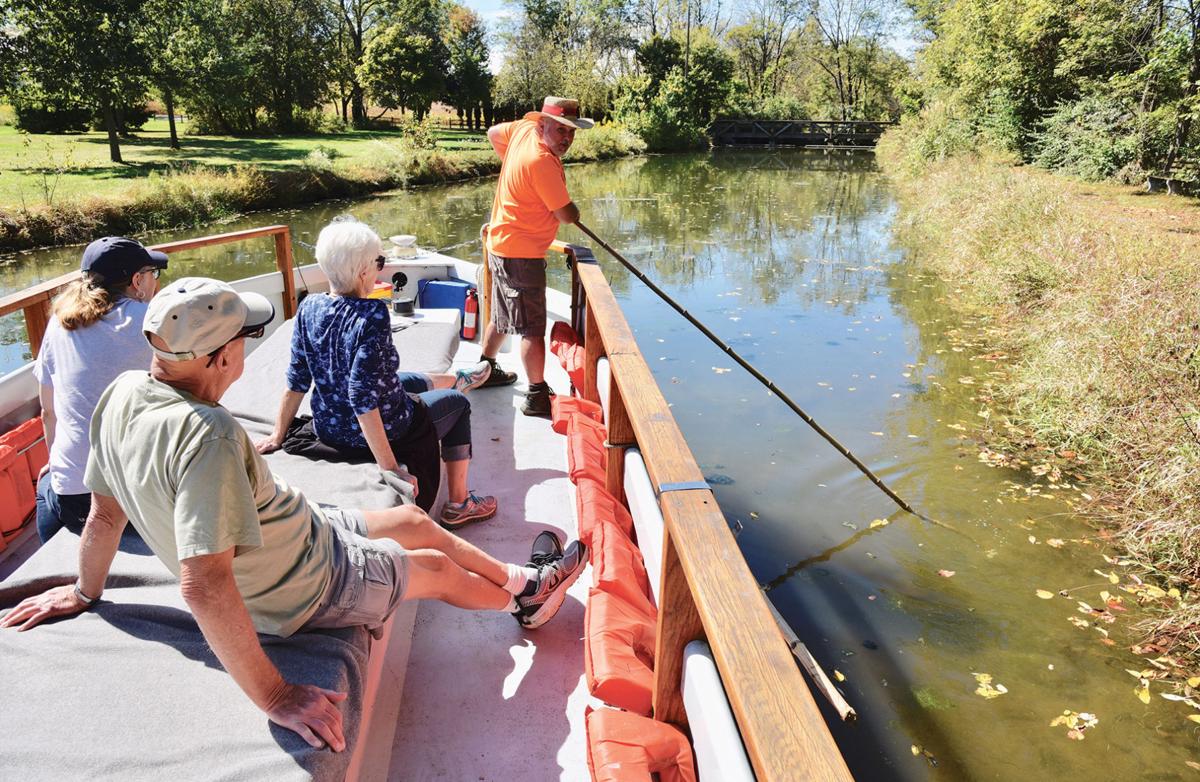 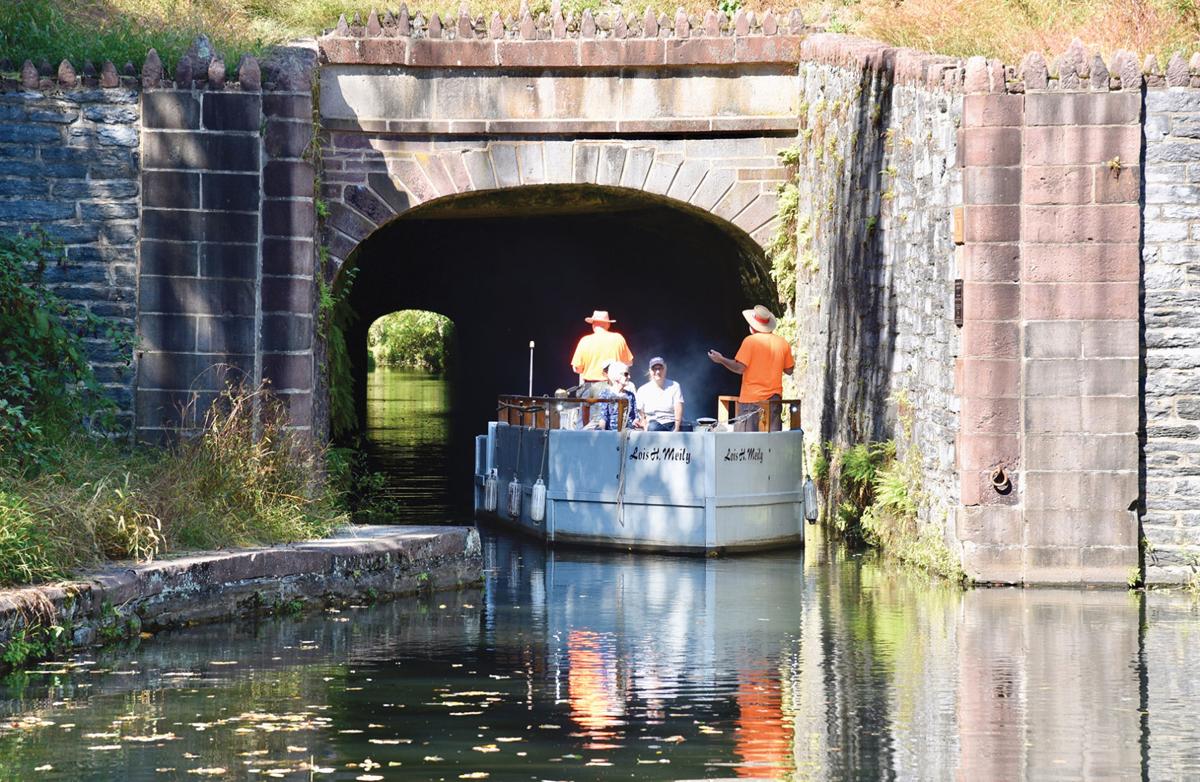 Visitors to Union Canal Tunnel Park in Lebanon, PA, venture into the tunnel, a National Historic Landmark, on a guided boat tour. 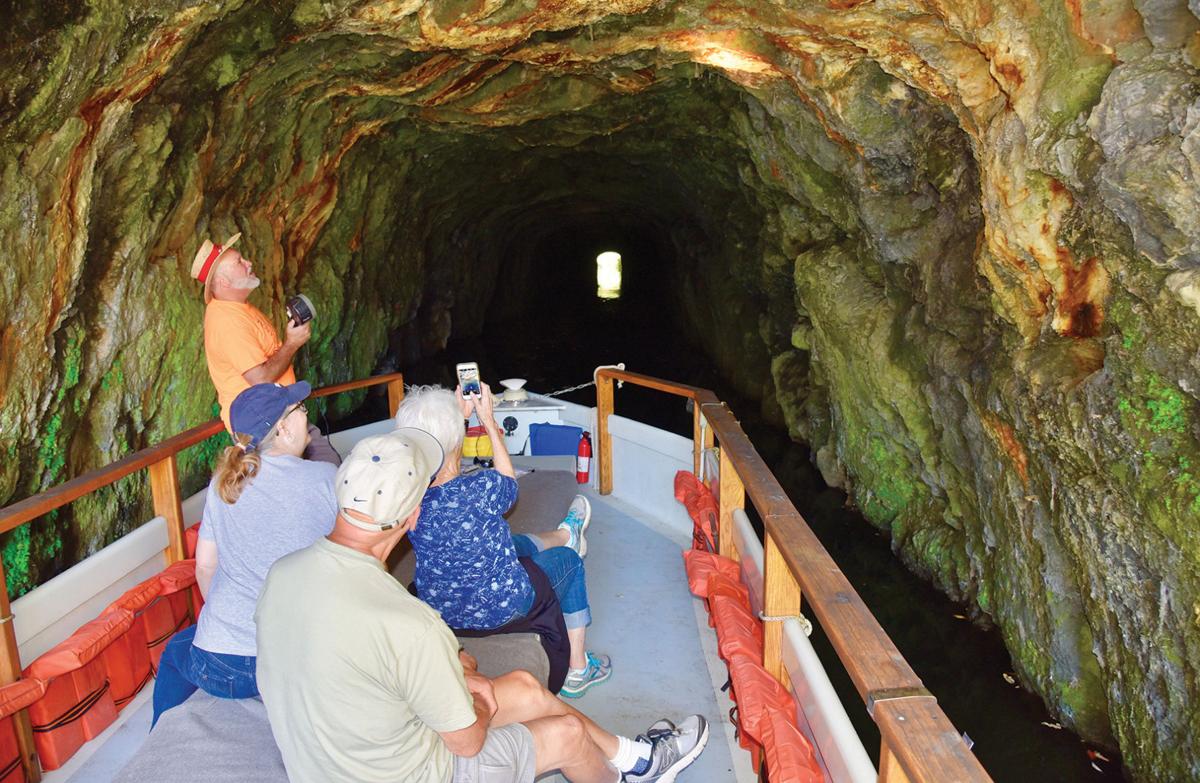 Workers hand-cut stone in the 1820s to forge this tunnel on the Union Canal, built to connect commerce between Philadelphia on the Schuylkill River and Harrisburg along the Susquehanna. 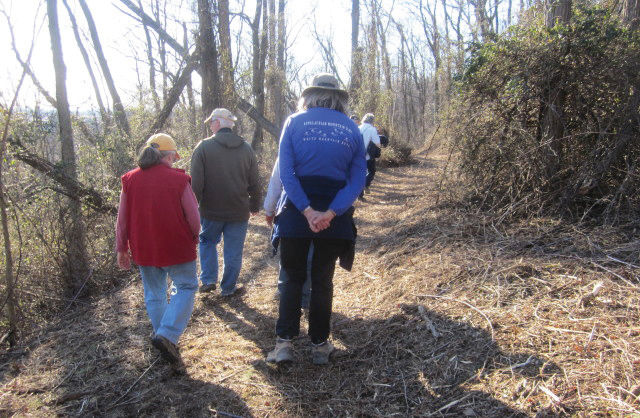 In addition to highlighting remnants of the historic canal, Union Canal Tunnel Park offers several hiking trails that are open dawn to dusk. 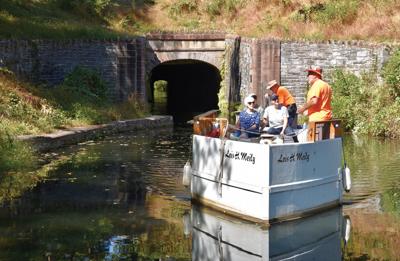 Only a little more than a half-mile remains of the 80-mile Union Canal, the nation’s first public works project, but a guided float on its placid waters in a replica canal boat drips with early American history when its founders dreamed big.

Aboard the open-air Lois H. Meily at Union Canal Tunnel Park on the outskirts of Lebanon, PA, narrator Ed Martel had just launched into the canal’s eventful history when he pointed out two painted turtles sunning on a log. Deer, turtles and fish are common sights on the trip as the canal winds through open fields and woods in the 100-acre park.

We were floating along at about 4 miles per hour, the same speed the original canal boats would have been going when mules, tethered to the boats and walking the shoreline “towpath,” lugged them toward their destinations. Some carried passengers, while others were weighed down with up to 25 tons of coal, lumber and other goods. Early canal boats were pulled by a single mule; later, with larger boats, it would take three.

Our replica was just as wide as the original boats — 8 feet — but shorter than their 50– to 90-foot length.

In 1690, Pennsylvania founder William Penn dreamed of a canal linking Philadelphia to the interior of the colony. Benjamin Franklin and others took action to pursue that vision many decades later, aiming to connect with Harrisburg along the Susquehanna River.

George Washington would visit the canal twice as president — once to hype the nation’s first canal and again to quell fights that broke out during its construction between disgruntled Pennsylvania Dutch farmers, whose land was being cut in half by the canal, and rowdy Irish immigrant workers, hired to build it. The well-publicized conflict became known as the Myerstown Riots.

As Capt. Dave Smith plied the rudder in the stern of our boat, Martel explained how surveyors mapped the canal to connect Philadelphia through the Schuylkill River at Reading with the Susquehanna River to the west near Harrisburg. The route followed the lines of least resistance, along two streams with names of Native American origin, the Tulpehocken and Quittapahilla. The streams would also supply water for the canal.

Work began shortly after the Revolutionary War, in 1792. The canal company began recruiting newly arrived Irish laborers from the ports of Baltimore and New York for the back-breaking work. In addition to 12-hour daily shifts and six-day work weeks, they were guaranteed shots of whiskey each hour from teen “jigger boys” hired for the purpose.

Many farmers did not embrace the project, and the canal brought the country’s first use of eminent domain.

Work crews labored on both ends toward the spot that now lies within Union Canal Park — the high point that sloped downhill toward each river. Here, they built the Union Canal Tunnel, the crowning achievement of the project and an engineering marvel for the time. The tour boat travels through it, and you will see markers noting it as both a National Historic Landmark and a National Historic Civil Engineering Landmark.

Workers tunneled through the ridge of solid rock by using gunpowder and relentlessly chipping away with sledgehammers and star point drills, one of which Martel passed around to his passengers.

The tunnel was completed in 1827, two years after it was started. The canal opened to traffic the next year. As our boat entered the dark tunnel, Martel used a floodlight to illuminate the straight lines where the gunpowder was packed. Once, an explosion sent the roof crashing down on four workers, killing all of them. The only other recorded death in the narrow tunnel was that of a tipsy boat captain who fell overboard and was crushed against the stone wall. Certainly, there were many crushed bones and concussions to workers that were not documented.

The ceiling and walls of the tunnel are ragged. The aim was to etch out just a minimal clearance for the boats to pass through, with no regard for aesthetics. Passage was so tight that some boat captains laid on top of their cargo and pushed the boat through with their feet against the ceiling. Most, though, poled their way through as their mules were led up and over the ridge. Martel demonstrated with a bamboo pole.

To alert oncoming boats they were about to enter the tunnel, captains would blow large conch shells with one end sawed off. Martel had a conch shell on hand and demonstrated its surprisingly robust imitation of a foghorn.

Passengers may get dripped on but don’t worry, the water is pretty clean, having been filtered through 80 feet of rock overhead.

The original tunnel was 729 feet long but was shortened to 600 feet in 1858 when enlarged to accommodate higher freight loads.

There are no bats in the tunnel — they do not roost over water — but we did see a screech owl in a nest peering out wide-eyed from the ceiling.

Not long after exiting the tunnel, the restored canal ends at one of the 90 locks on the main canal. Like most of the locks, this one was cannibalized long ago. Its hand-cut sandstone blocks were whisked away for other uses.

We turned around and began our return trip. In response to our many questions, Martel explained how canal boats going in different directions passed each other, when mules going in opposite directions were sharing a single towpath. The mule pulling one of the boats would stop and the tether rope would sink, allowing the other boat to pass by.

Unlike our leisurely float, life aboard a working canal boat was hard, demanding work. The boats were privately owned, many by families who lived in an 8-by-8-foot cabin. Typically, the father would be up front, on the lookout for debris or perhaps for a snapping turtle to use in a soup. The wife steered the boat.

Children often were mule walkers, following the towpath all day. Younger children were fitted with a rope so they could be dragged back in if they fell overboard while playing.

A feeder branch canal was added in 1829 to tap cargo from coal country which, along with lumber, was vitally important for the emerging Industrial Revolution. Boats coming back from Philadelphia brought whiskey, molasses, cast iron skillets and other goods to the interior settlements. Most of the large bells still ringing in Lebanon County churches arrived on canal boats.

When the canal opened, it revolutionized transportation, quickly outpacing the prevailing means of hauling goods: the Conestoga wagon with its teams of horses and mules and smaller loads.

For a while, the canal thrived with up to 100 freight and passenger boats a day. But the canal’s days as a lifeblood of commerce were short-lived. Its overseers had made a blunder when, despite enlarging the tunnel to handle longer boats with triple the loads, they kept the locks at only 8.5 feet wide. That prohibited the larger canal boats, which were becoming the norm.

The canal was doomed, too, by the emergence of railroads that could operate year-round and carry more freight. The final nail in the coffin was the flood of 1862, which destroyed the all-important feeder canal in coal land. The canal’s owners filed for bankruptcy and the canal closed in 1885 after a run of 57 years. Much of the land was sold to railroads that built their lines on top of the tow path or filled in the canal and laid track on top of it.

To preserve the vanishing canal, the Lebanon County Historical Society purchased a portion and began acquiring adjacent properties. It dredged the canal, filled it back up with water, fixed a wall of the tunnel that had collapsed and created the Union Canal Tunnel Park in 1998. The popular boat tours were launched in 2001.

The 100-acre Union Canal Tunnel Park, located at 25th Street and Union Canal Drive, Lebanon, PA, is open dawn to dusk year-round, with free admission. Its featured attraction is the Union Canal Tunnel, built by hand from 1825–27. There are picnic tables, pavilions and benches, and hiking trails on both sides of the canal.

You can walk to the tunnel and over it, just like the mules did. Or — if the coronavirus restrictions are lifted — you can take a one-hour narrated boat tour on a restored section of the canal and through the tunnel on Sunday afternoons from June through September. In general, tours will run the first three Sundays of the month from 12:30–3:30 p.m.

The cost is $10 for adults and $5 for ages 6–17. Children 5 & younger are free. There are no advanced reservations. Private tours with a minimum of 10 people can be reserved at least 2 weeks in advance by calling 717-272-1473 or emailing office@LCHSociety.org.