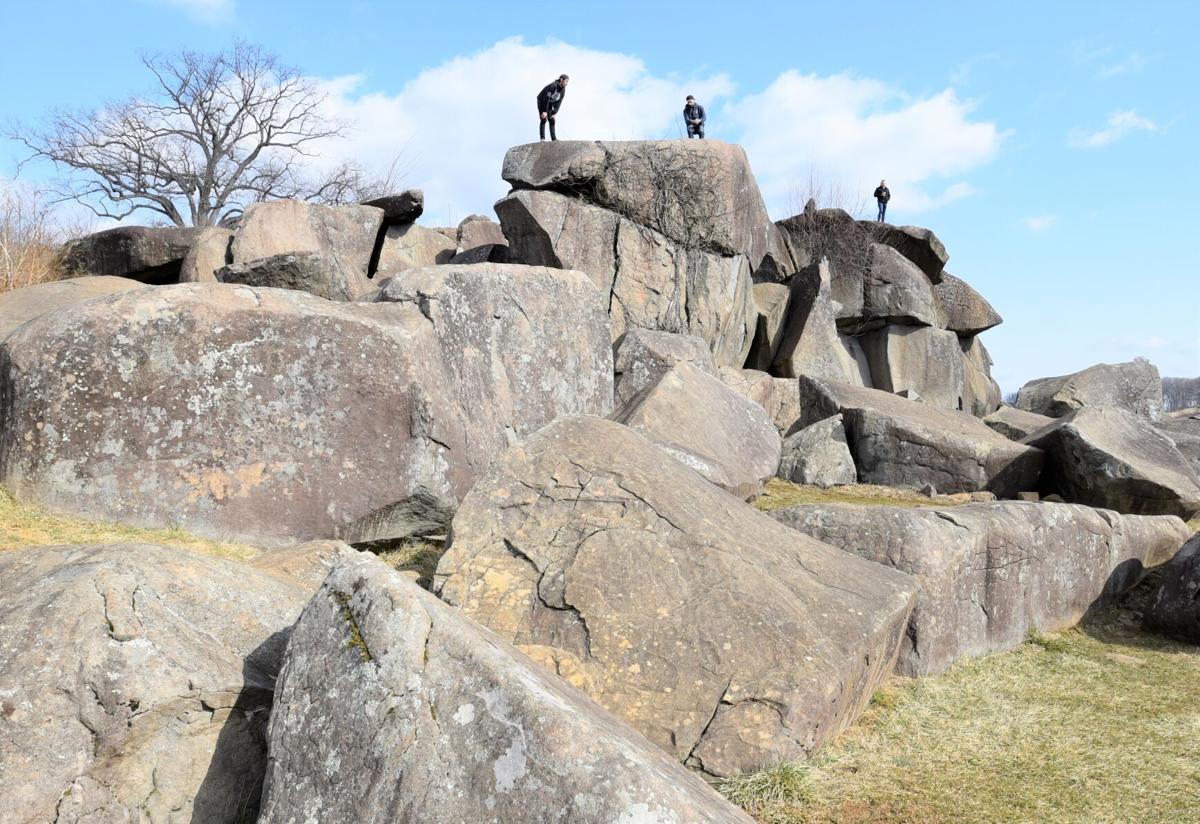 This rock formation, called Devil's Den, was the scene of fierce fighting during the Civil War's Battle of Gettysburg. 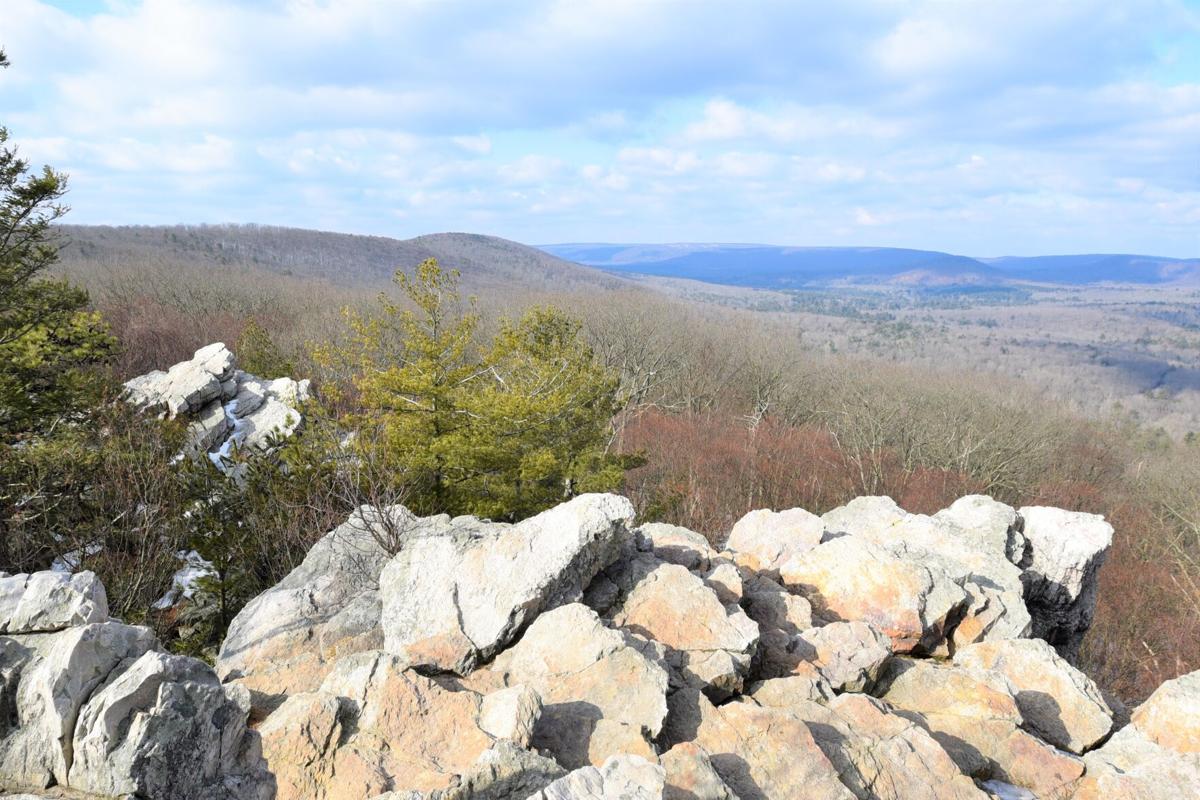 Pole Steeple, one of the most scenic overlooks in Pennsylvania, is a quartzite upthrust caused by immense forces about 300 million years ago. 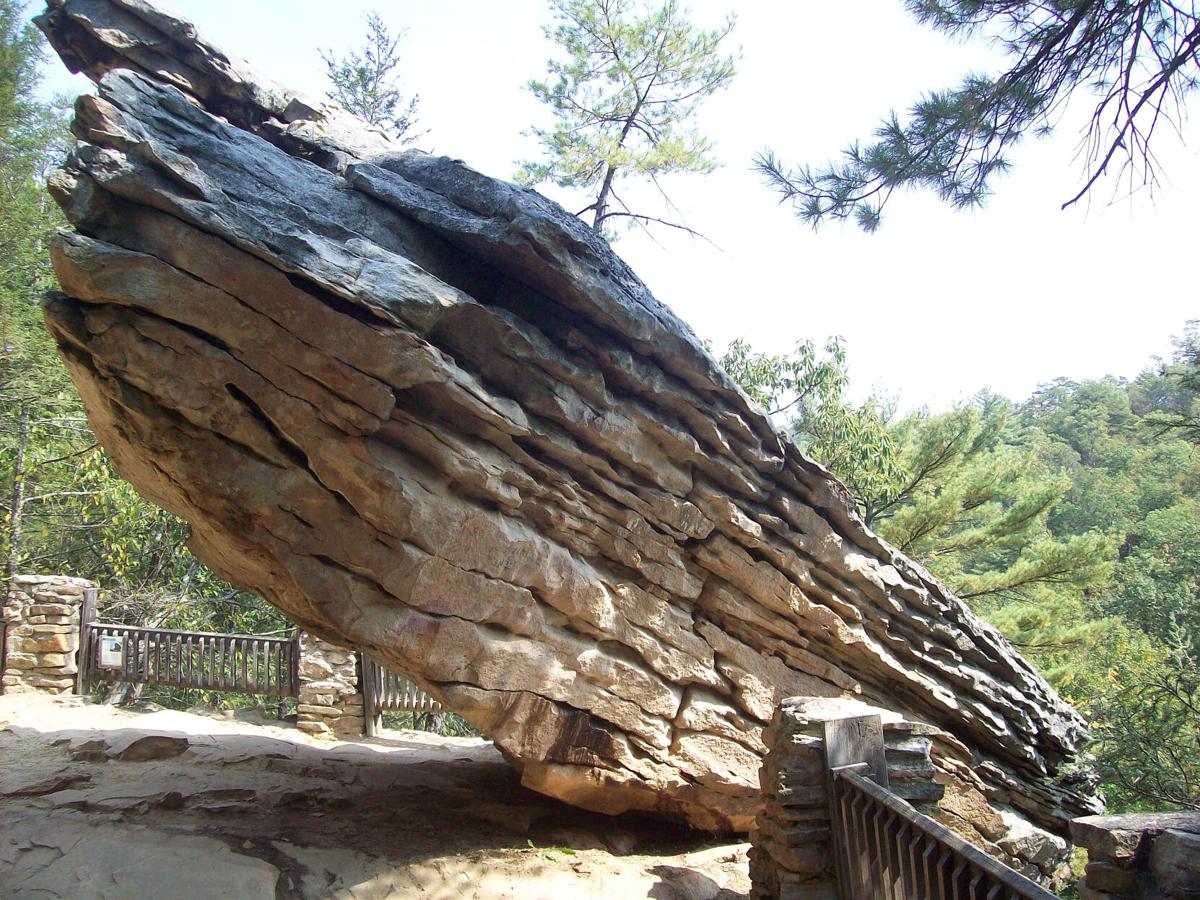 This sandstone boulder the size of a car is about 350 million years old and will eventually tumble over the ridge it is perched on. 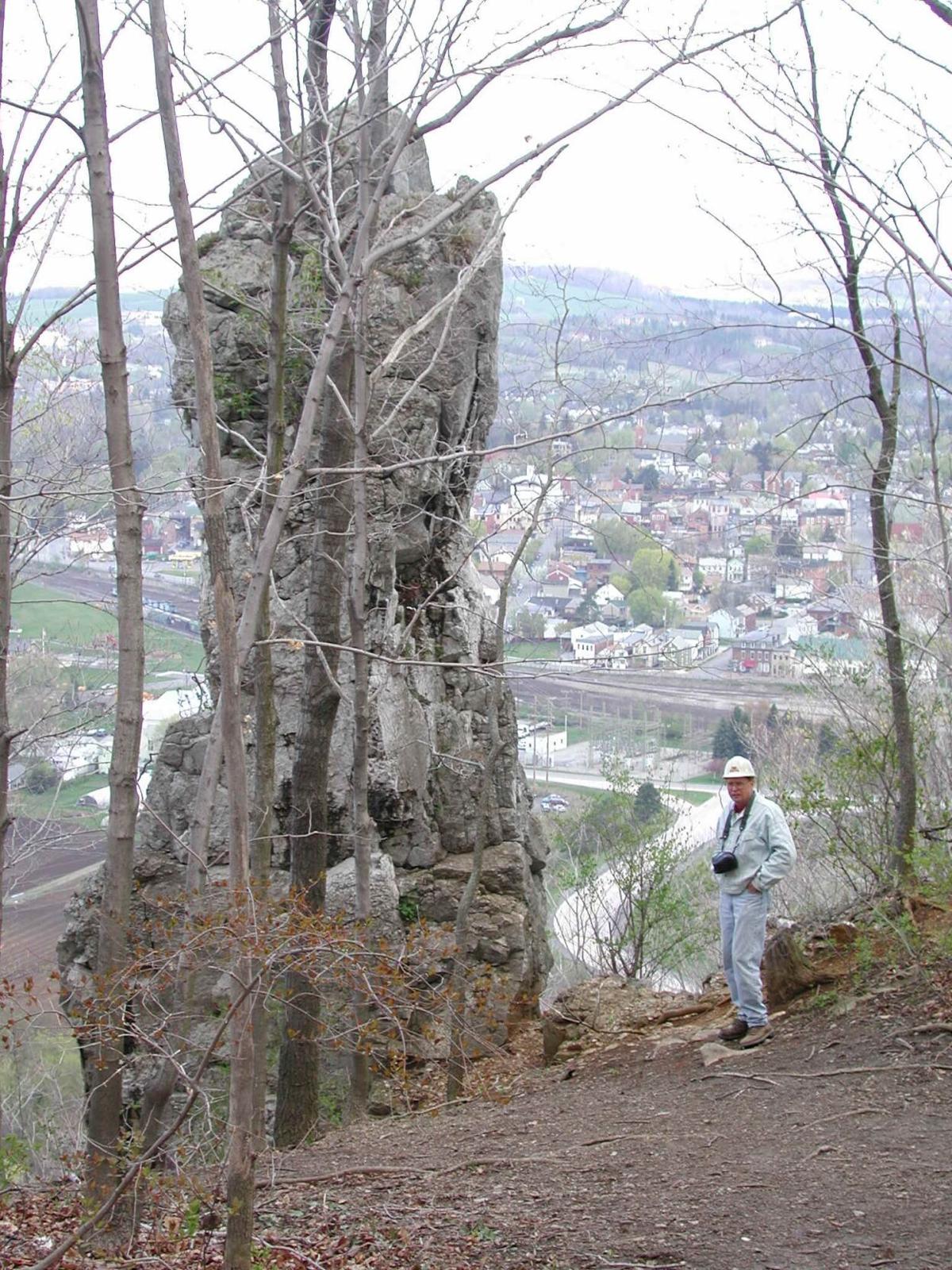 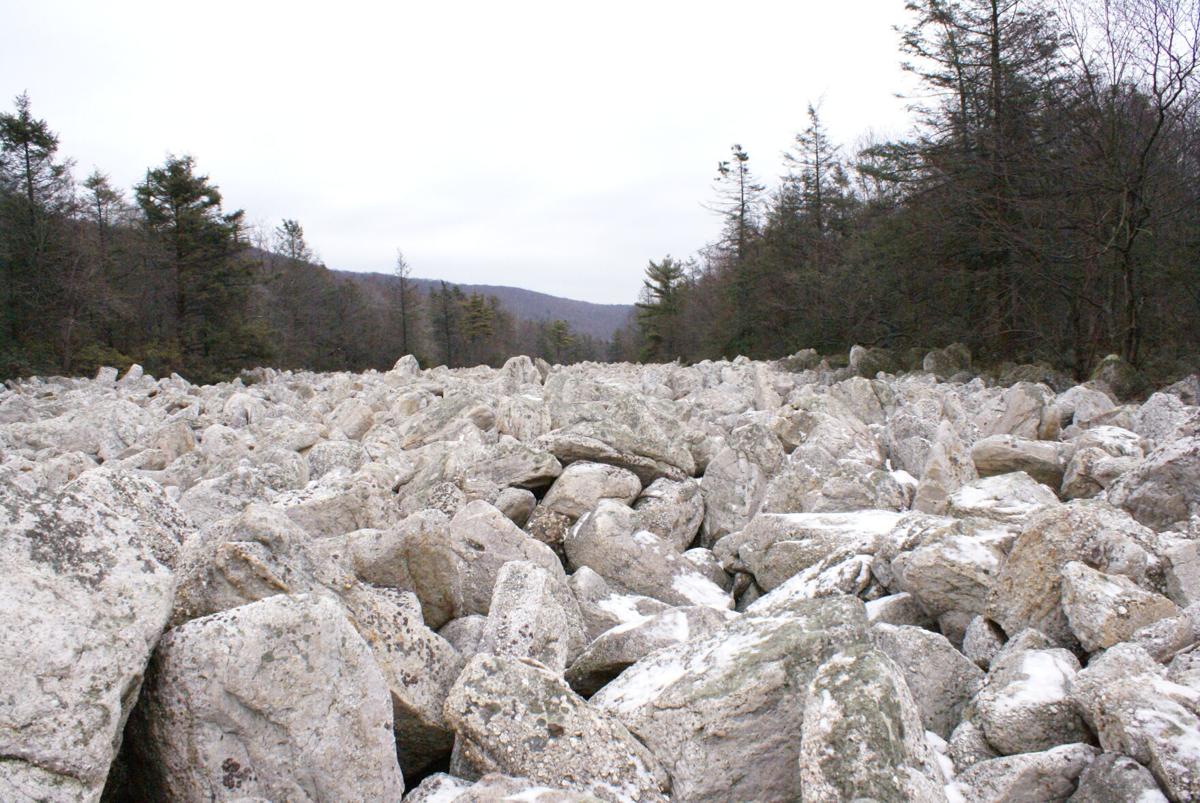 This boulder field is called Devils Race Course because you can hear a stream gurgling below. 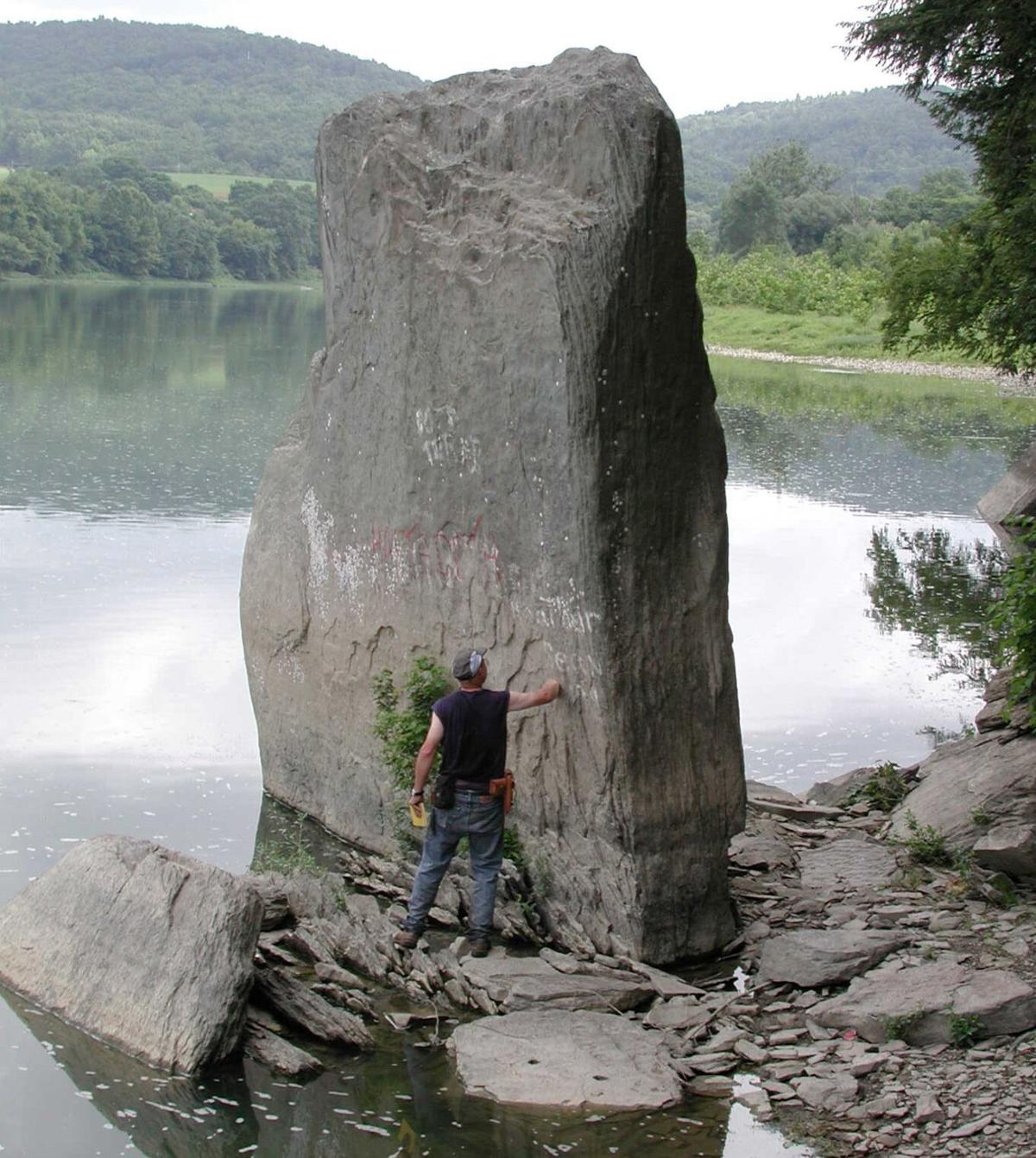 The 25-foot-high block of sandstone, which toppled during a landslide 8,000 to 10,000 years ago, is embedded along the Susquehanna River.

In a treeless plain on the edge of Gettysburg in southcentral Pennsylvania lies a jumble of dark and rounded boulders.

This “boulder city” is made up of diabase rock, a very hard igneous rock that ended up here 200 million years ago — originating as hot magma oozing to the surface from underground volcanoes. Within the last few centuries, it became known as Devil’s Den.

On a hot summer day in 1863, Confederate soldiers desperate for cover drove Union forces from the rocks, then squeezed into the cracks and fired on their rivals hiding behind another diabase outcropping at Little Round Top.

Other long-ago geologic forces had helped steer Union and Confederate armies toward that battlefield.

Confederate troops had used the looming barrier of the Blue Ridge Mountains to move secretly north. A windy gap enabled them to move a large force with wagons through South Mountain and on to Gettysburg, where a surprise encounter awaited them.

Neither side wanted to fight there because the Gettysburg plain had diabase rocks just below the surface and soldiers couldn’t dig in for protection. That meant the elevated outcrops became turning points in the battle.

The formation of Pennsylvania’s land features and bedrock has been going on for millions of years. Along the way, there have been dinosaurs, volcanic eruptions, glaciers, erosion and sedimentation, and the crash of tectonic plates that formed mountains and oceans.

Those forces have shaped many facets of the state’s landscape, history and communities, from battle sites and industrial activity based on natural resources to the renowned fertility of the state’s farmland.

If you seek out the state’s geologic landmarks, you may come to appreciate what are known as drumlins, rock cities and moraines, and you may learn that Pennsylvania was once an ancient seabed — and was south of the equator.

“I just hope people get a little appreciation of what’s under their feet,” said Pennsylvania Geological Survey geologist Stuart Reese. “Rocks tell a story. It’s really incredible how much has happened, and the beauty of it, and the story you can piece together from studying rocks. It’s amazing.”

The Geological Survey has compiled guides for 122 sites that can be accessed through an online map at gis.dcnr.state.pa.us/pageode. Caution: It may take some persistence to navigate the site. Under the Layers menu, choose to make the Trail of Geology visible. Click on the map icons for individual sites, and you’ll see a brief summary in the side panel. Click on the Trail of Geology site number found there for access to more detailed information.

Here’s a brief sampling of Pennsylvania geologic landmarks to explore.

I wish I would have been a Geologist! Love this story, A lot of digging for facts, very interesting.