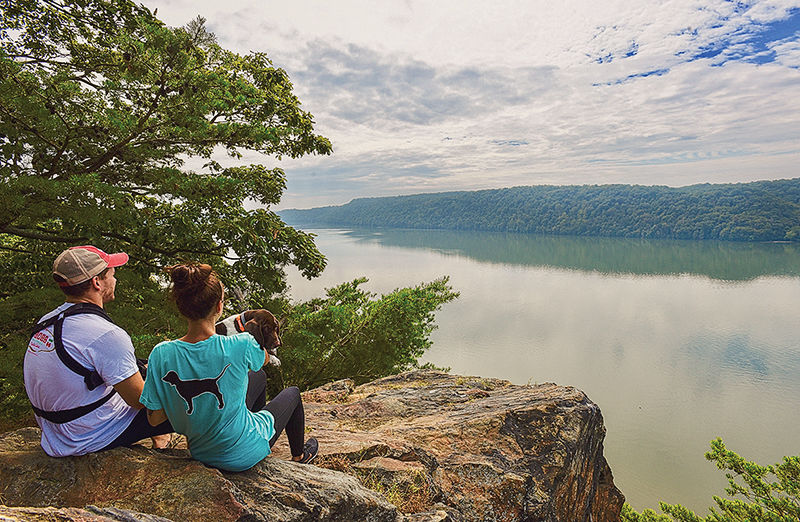 A couple and their dog enjoy a late-summer view of the Susquehanna River at the Star Rock overlook in the Chestnut Grove Natural Area section of the Turkey Hill Trail in Lancaster County, PA. 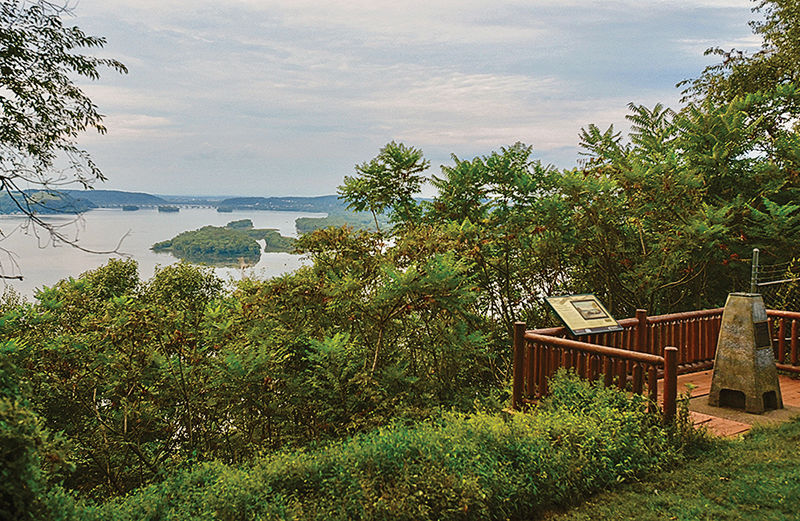 The overlook atop Turkey Point on the Turkey Hill Trail in Lancaster County, PA, has a view of the Conejohela Flats mudflats and islands in the Susquehanna River. The flats are a celebrated rest stop for shorebirds. The overlook is also the exact spot where the architect of the U.S. capitol painted the view in 1802. 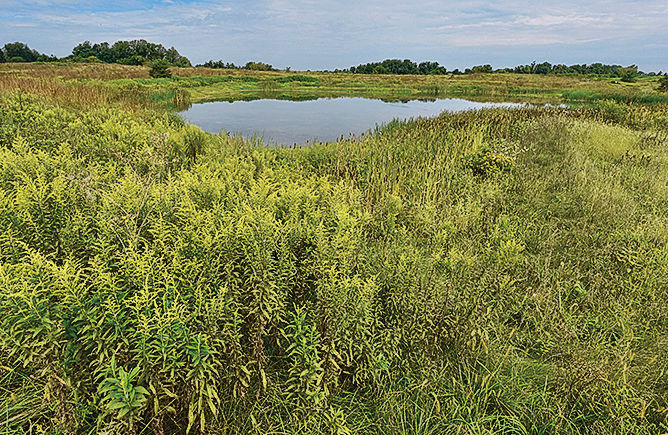 The 170-acre Chestnut Grove Natural Area has a sea of native grasses and flowers and 4.5 miles of trails. 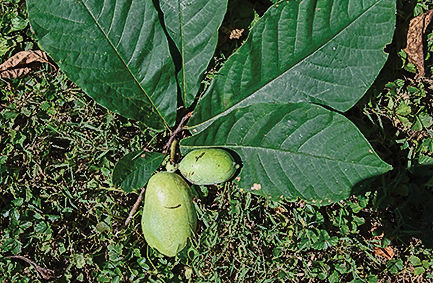 The Turkey Hill Trail in Pennsylvania has the largest pawpaw patch north of Maryland.

Where can you find the largest pawpaw patch north of Maryland, trace an old railroad bed along the Susquehanna River, hear the swoosh of wind turbines and meander through vast flowering meadows?

And where, on the same hike, can you get a bird’s-eye view of one of the most important migratory stops for shorebirds and take in two killer views of the Susquehanna at its widest point, one in the exact spot where the architect of the U.S. Capitol stood and took brush to canvas in 1802?

Well, surprisingly, on either end of Lancaster County’s landfill in Pennsylvania.

The 6.3-mile Turkey Hill Trail loop manages to compress all of those experiences in the unlikeliest of settings. The trail, which is rated easy to strenuous with a couple of steep climbs, revolves around Turkey Point (known locally as Turkey Hill), a Lower Susquehanna landmark that juts into the river, causing it to curve gracefully around it.

It’s one of the highest points on the river and is becoming even more so as the Frey Farm Landfill expands vertically. To minimize its impact on the river viewshed, the landfill, when closed, will be cloaked in trees and grasses.

It would have been easy enough to let Turkey Point become known as just a dump, but the Lancaster County Solid Waste Management Authority has spent considerable money and effort to preserve and even create new natural areas on either side of the landfill.

Using easements from the waste authority and Norfolk Southern Corp., the Lancaster Conservancy created the Turkey Hill Nature Preserve. A steep, initial 1-mile section of the Turkey Hill Trail through the preserve leads to the top of Turkey Point. A short side trail along the landfill fence leads to a wooden observation deck.

Here, in 1802, architect and artist Benjamin Henry Latrobe sat with his easel and painted a watercolor of the view at the Susquehanna’s widest point. You can view an image of the painting on a plaque on the deck.

The view hasn’t changed much. Still visible are the string of small islands and mudflats known as the Conejohela Flats. Each spring and fall, tens of thousands of shorebirds rest and dine on buried insects on the islands as the birds wing to and from breeding grounds in Arctic Canada and Alaska and wintering grounds in South and Central America. It’s a birdwatchers’ mecca, and the islands have been designated an Important Bird Area by the National Audubon Society.

On the platform, you also are dwarfed by two wind turbines just beyond a fence. You are so close you can hear the distinctive swishing sound of the 135-foot-long blades cutting the air. Most visitors, when standing almost underneath the 397-foot-tall turbines, are surprised to learn just how big the windmills are.

Beyond the turbines, barely visible, are a few rooftops of the Turkey Hill Dairy, famous for its ice cream and iced teas.

From the summit of Turkey Point, the trail follows the wooded ridgetop of the River Hills for about a mile, paralleling and looming above the Susquehanna. Parts of it follow a grassy swath outside the landfill perimeter. It’s an opportunity to observe a landfill up close and personal, if you care to. It’s still active, and hikers occasionally complain of odors when the wind is out of the east, which it rarely is. There is one crossing of Mann’s Run, but hikers generally don’t find it difficult to hop rocks across the small stream.

Suddenly, you emerge from woods at a high point to find a vast sea of grasses, flowers, wetlands, copses of trees and a shallow pond carved from the expanse. This unexpected open area is the Chestnut Grove Natural Area, a 170-acre preserve with another unusual story.

This is the site of a former farm that the waste authority bought before scraping off 7 feet of topsoil to cover trash at the adjacent landfill. With the top layer of earth gone, the site underwent a three-year ecological restoration. The focus was to establish 85 acres of undulating prairie grasslands seeded with thousands of native grasses and wildflowers. Other features include wet meadows and oak savannas. About 30 acres of farm fields are being reforested.

In the fall, showy summer flowers give way to more muted autumn displays and colorful grasses. The River Hills that border the meadows will don foliage colors and take over the limelight.

The variety of habitats and nearness to the Susquehanna — a major migratory flyway — have made the natural area a favorite stop for birders. Case in point: the Lancaster County Bird Club has identified 218 species of birds so far in 2019 at Chestnut Grove.

The morning I was there, I studied a migrating yellow-legged shorebird marching stiffly across the pond’s shallow waters. Drunk on the cornucopia, various songbirds feeding on flower heads and grasses flitted constantly ahead of me at eye level. The droning of cicadas, grasshoppers and other insects blended with birdsong for pleasant background music. Melded with the moving vegetation, the natural area became an animated place indeed.

Even the area’s namesake has been brought back, with an experimental grove of young American chestnut trees tended to by the American Chestnut Foundation.

One stop not to be missed is Star Rock Overlook, a collection of rocks that jut from a wooded knoll on the property and afford a 180-degree view up and down the Susquehanna. Both sides of the Susquehanna are mostly undeveloped here, thanks to a private-public initiative that has seen thousands of acres of former utility lands protected for the public.

The third encounter was nearby resident Cabell Kladky, getting in a brisk walk with her chocolate Lab in training.

“I mean, is there a prettier place in Lancaster County?” she asked. “You’ve got easy trails, you’ve got hard trails. You have a mix of terrain. You have geocaching, runners, dog people. It’s so freaking wholesome!”

The natural area is roughly the halfway point of the loop. The trail leaves the natural area abruptly and takes a short but steep jaunt to yet another strikingly different setting. You emerge from the woods onto the Enola Low Grade Rail Trail.

This wide, pressed-stone rail trail takes you back 2.5 miles to the trail terminus between the Susquehanna and sheer cliffs. Unlike the rest of the Turkey Hill Trail, there are no dramatic ups and downs, or even turns. That’s because when this Atglen and Susquehanna spur of the old Pennsylvania Railroad was built between 1903 and 1906, it was an engineering marvel. Blasted from riverside cliffs, the 29-mile Low Grade has no slope steeper than 1% and no curve greater than 2%. At the time, it was celebrated for being second only to the Panama Canal for the amount of earth moved.

Around 200 immigrant laborers were killed during construction, many by premature dynamite blasts or flying debris.

The trail section has many open views of the river and bald eagles are common. Look for where Mann’s Run crosses. There are several little waterfalls skittering over bedrock before the stream is abruptly shot into the river by a concrete viaduct.

You know you’re nearly back at your car when you pass a restored 1947 Pennsylvania Railroad caboose.

What a diverse trip it’s been.

The most popular starting point for the 6.3-mile Turkey Hill Trail circuit hike in Lancaster County, PA, is from the large parking area of the Enola Low Grade Rail Trail, located at 2501 River Road, Conestoga, PA. There are restrooms at the trailhead.

The trail can also be accessed at its midpoint in the Chestnut Grove Natural Area. A parking lot is located at 43 Chestnut Grove Road, Conestoga, PA. The purple-blazed Meadow Trail leads to the Turkey Hill Trail in less than 1,000 feet. The natural area has 4.5 miles of trails to explore. Some trails are suitable for handicapped visitors.

The Turkey Hill Trail and Chestnut Grove Natural Area are open from dawn to dusk seven days a week. Both permit dogs on a leash.