Skip to main content
You are the owner of this article.
Edit Article Add New Article
You have permission to edit this article.
Edit
Welcome, Guest
News
Travel
Columns
Opinion
Multimedia
Podcasts
About
Contact Us
e-Edition
Subscribe
Donate
1 of 5 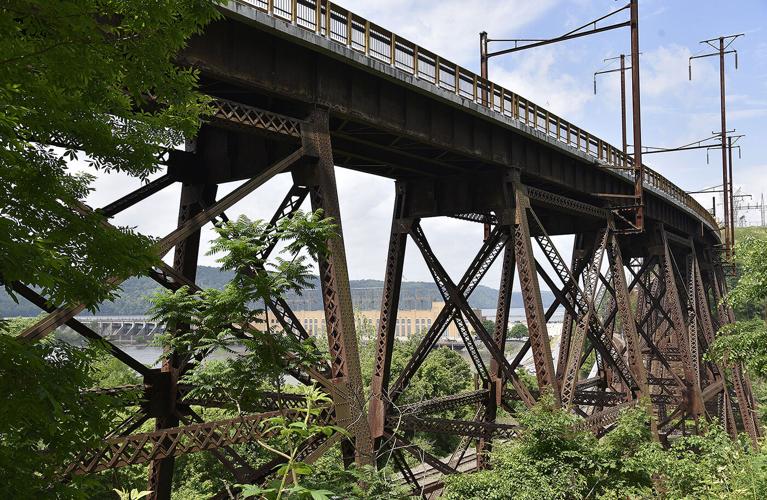 The Safe Harbor railroad trestle in Lancaster County, PA, which opened in 1906, has been repurposed as part of a hiking and cycling trail. The Safe Harbor hydroelectric plant across the Susquehanna River is in the background. 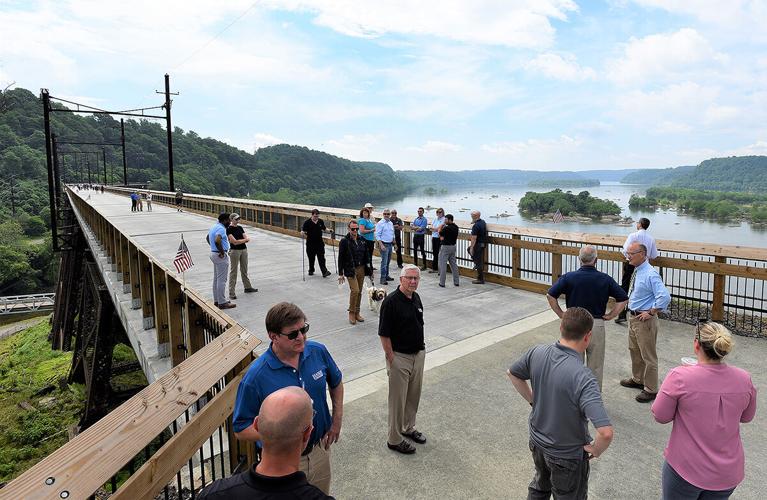 Officials and supporters gather on June 2, 2022, to celebrate the opening of the Safe Harbor railroad trestle as a new feature on the Enola Low Grade Rail Trail in Lancaster County, PA. 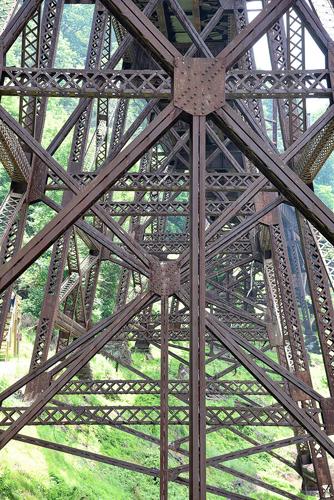 A labyrinth of steel girders supports the Safe Harbor railroad trestle, now open for public use as part of the Enola Low Grade Rail Trail in Lancaster County, PA. 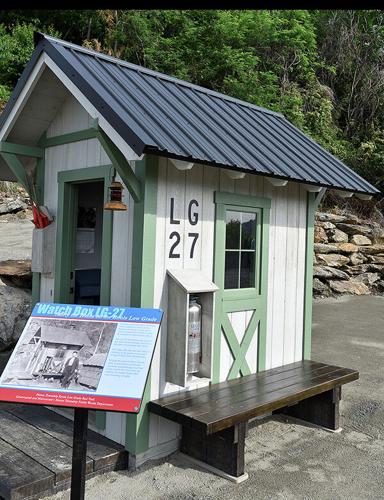 A replica guard house near the trail that crosses the Safe Harbor railroad trestle shows where rail line workers would stop to warm up or hang a red lantern to warn of debris or other trouble on the tracks.

The view from the Safe Harbor railroad trestle in Lancaster County, PA, shows dramatic views of the Lower Susquehanna Gorge.

You can now walk or bike across one of the longest and highest railroad trestles in the nation, travelling high above the Susquehanna River for one of the river’s most breathtaking views.

Visitors began streaming across the 125-feet-high steel span in the hot sun at midday June 2, following a short dedication for the 8-year, $9 million repurposing of the Safe Harbor railroad trestle in Lancaster County, PA.

The trestle crosses the mouth of the Conestoga River as it empties into the Susquehanna.

They hope the spot will become a major tourist attraction, drawing visitors to enjoy the sweeping, bird’s-eye view of the Lower Susquehanna Gorge. And because it finally links two parts of the popular 28-mile Enola Low Grade Rail Trail that follows the Susquehanna and crisscrosses pastoral Lancaster County. The state Department of Conservation and Natural Resources considered the missing link one of the top three trail gaps in the entire state.

Even without the feature attraction of a walkable, quarter-mile trestle, a 5-mile section of the rail trail had attracted visitors from 25 states in recent years. Now, visitors have an even more striking reason to experience the trail.

The trestle, which is on the National Register of Historic Places, was finished in 1906 as part of the Enola Low Grade rail line, a worldwide engineering achievement at the time.

The freight line for the Pennsylvania Railroad had to be carved by repeated blasting of sheer cliffs along the Susquehanna. Some 3,000 workers toiled there, including 200 workers who were killed — mostly immigrants recruited as soon as they stepped off incoming ships. The massive amount of earth-moving involved was considered second only to the Panama Canal.

The line eventually lost its luster, and the last train crossed one set of the double tracks atop the bridge in 1988.

But local and state officials envisioned what the trestle could mean in terms of recreation tourism and started bringing together funding to repurpose the span for a new generation of users. The Pennsylvania Department of Transportation contributed more than $6 million.

Ballast and rotting wooden decking were removed and replaced with a 22-foot-wide concrete pathway. Visitors can scope the plentiful waterfowl and raptors with binoculars mounted at two places on the span. At one end of the bridge is a picnic pavilion with tables, rest rooms and historical interpretive panels.

There’s even a replica of one of the guard houses where workers walking the rail line would warm up or hang a red lantern alerting train conductors to debris or other trouble on the tracks.

The melding of the river’s industrial and scenic complexity is on full display from the path across the trestle. Below one end is the Safe Harbor hydroelectric dam, always humming and churning out tailwater that attracts bald eagles, gulls and all kinds of waterfowl.

But the view of the river at its widest and most dramatic drop is undeniably the crown jewel of the trestle experience. For most of its 444-mile meandering from New York to Maryland, the river flows peacefully through valleys. But its most dramatic geologic carving is here, cutting through the steep River Hills in southeastern Pennsylvania.

From atop the trestle, visitors can see the gorge that resulted. The river bed here is littered with forested or exposed rock islands, including some with Native American petroglyphs.

“The Lower Susquehanna Gorge is our Chesapeake Bay here in Pennsylvania, and it’s magnificent,” Cindy Adams Dunn, secretary of the Pennsylvania Department of Conservation and Natural Resources, said at the dedication.

At two places on the trestle, visitors without vertigo can stare down through glass panels into the Conestoga River and the labyrinth of steel beams that support their elevated view.

“Take a look across this bridge and across the river,” Platts said. “It’s a nationally important place with important stories to tell.”

The trailhead for the Enola Low Grade Rail Trail is at 2459 River Road, Washington Boro, PA, with portable toilets and 80 parking spaces. The distance to the Safe Harbor trestle is 5.25 miles.

You can also reach the trestle from the Safe Harbor hydroelectric dam at 1 Powerhouse Road, Conestoga, PA. Park at the signed trailhead, right before the road crosses the Conestoga River, or continue across the bridge and park in the lot for the dam. It’s a short but steep 10-minute walk on a gravel path and 36-step staircase to the bridge.