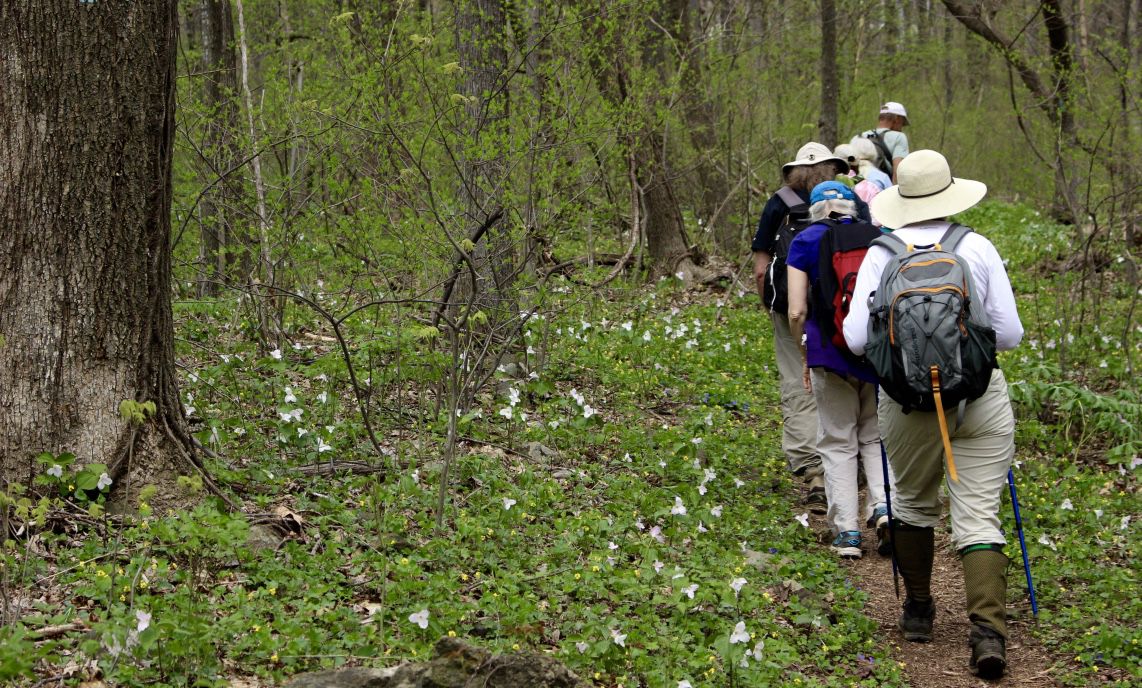 Members of the Piedmont Chapter of the Virginia Native Plant Society trek through blooming trilliums at the Thompson Wildlife Management Area. 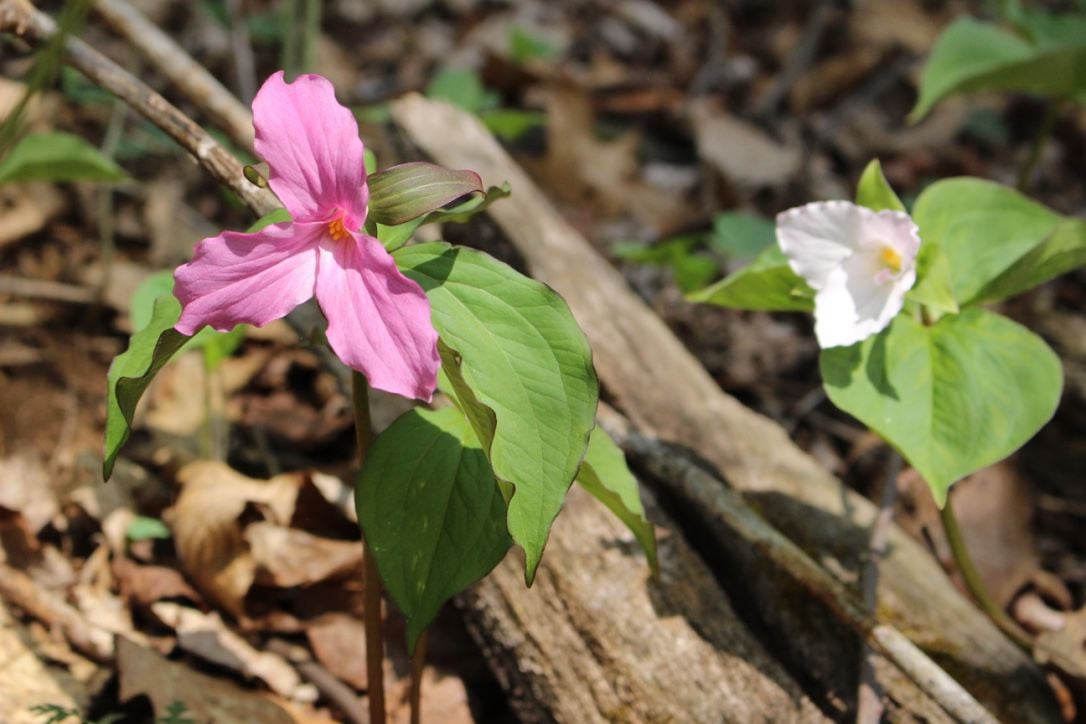 When blooming, the trillium flowers at the Thompson Wildlife Management Area range from pale rose to deep crimson. 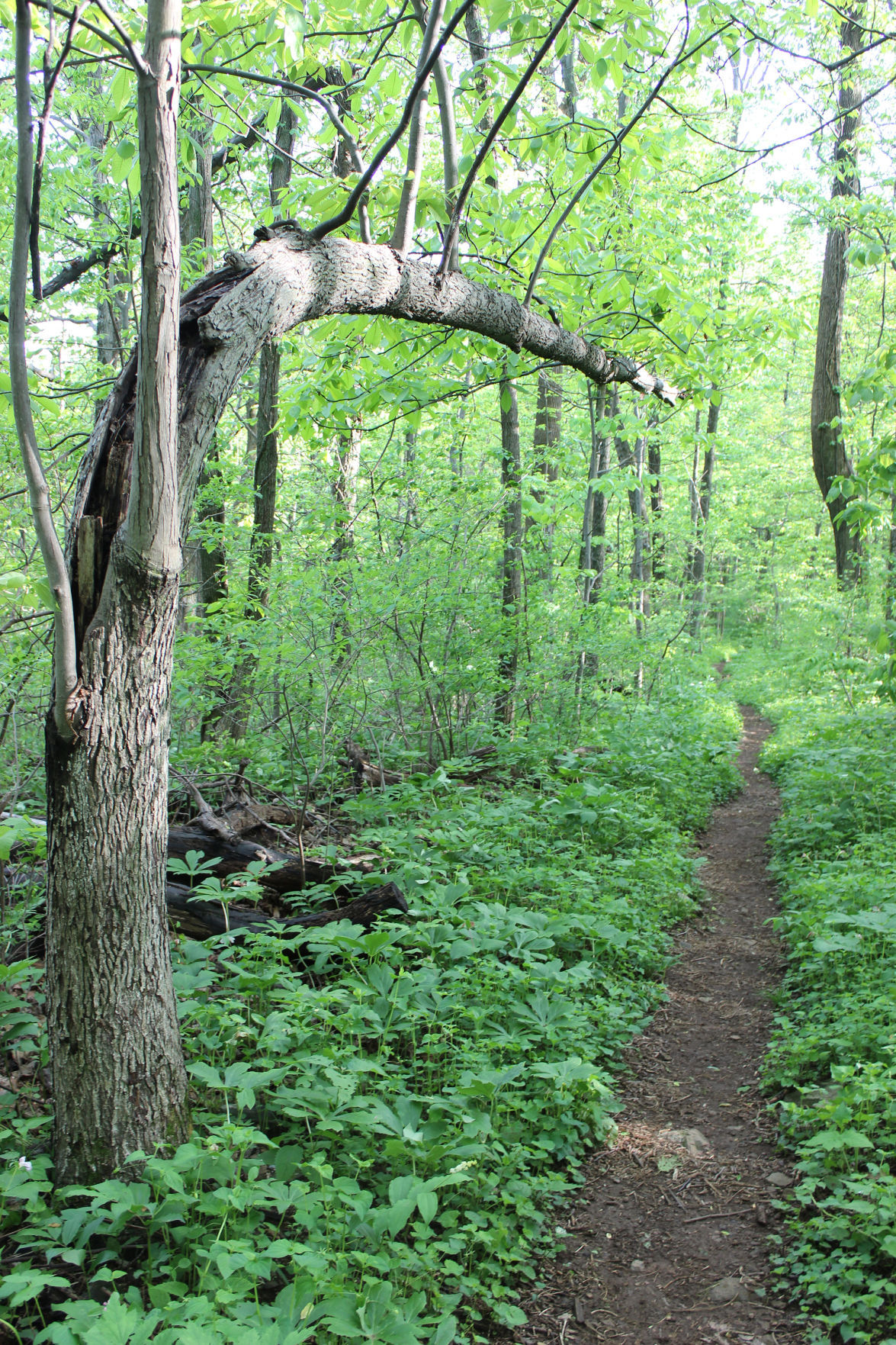 Even after most of the trilliums have the faded, green foliage blankets the understory of the Trillium Trail at the Thompson Wildlife Management Area in Virginia. 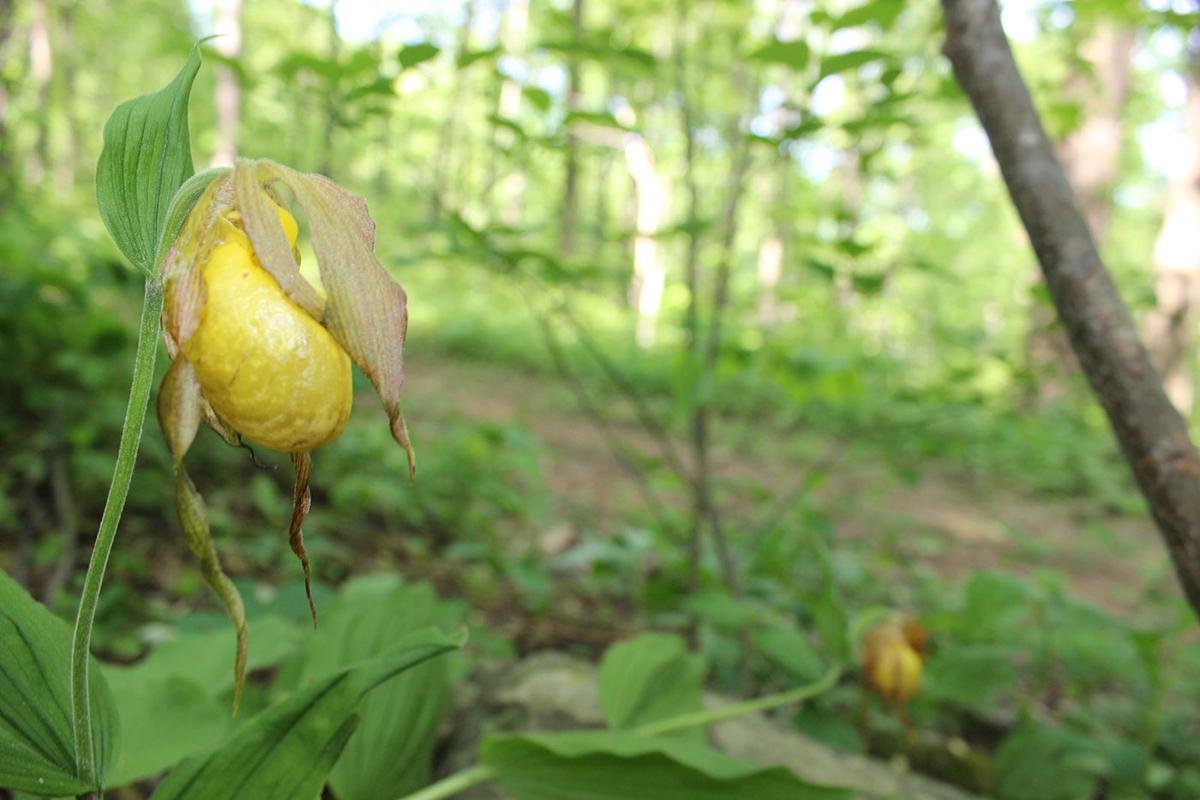 A patch of yellow lady’s slippers overlooks one of the main trails at the Thompson Wildlife Management Area.

It was late spring last year when I got the tip: For a spectacular showcase of wildflowers, head to the G. Richard Thompson Wildlife Management Area in Fauquier County, VA.

And so I did, hoping to glimpse the blooms that make this tract of land a prime springtime destination for native plant lovers.

I strolled down the Marjorie Arundel Wildlife and Birding Trail, the first of three legs that create a 1.2-mile loop through a forest alive with the calls of migratory birds. The emerging leaves of the towering tulip trees braided the light and cooled the air as the gently sloping trail wound its way along the crest of the Appalachian Mountains.

Here, the mix of slope and type of soil, combined with minimal disturbance throughout the land’s history, gives rise to one of the largest stands of large-flowered trilliums (Trillium grandifolium) on the East Coast. This spring bloomer grows 12– to 18-inches high and sports showy white flowers.

Trillium comes from the Latin word tres, for three, and it’s no wonder the plant has garnered this name. Everything about the trillium comes in sets of three: three large, green bracts whorl around the stem, and three smaller and paler leaf-like structures, called sepals, frame the three petals that curve outward into a funnel. Within the flower, six stamens are organized in two whorls of three. Three stigmas receive the pollen during fertilization.

From late April to early May, the white, pink and lavender trillium blossoms blanket almost 2 square miles of forest floor at the Thompson Wildlife Management Area. Unfortunately, my trillium timing was slightly off — there were only a few fading white and lavender flowers above the plants’ green leaves — but other blooms were taking center stage, reaching for afternoon sun amidst unfolding ferns.

The purple-pink flowers of the wild geranium leaned in toward the trail among the broad, green leaves of mayapples, another spring ephemeral. The mayapples hovered a foot above tree roots on the moist forest floor, with umbrella-like leaves protecting the pendulous white flowers hanging below.

In 1971, Virginia purchased the majority of the management area’s 4,000 acres using funds for restoring wildlife and sport fish habitat. Once called Apple Manor for the acres of orchards grown on the side of the mountain, the area was renamed G. Richard Thompson, after a local hunting enthusiast.

Soon, though, biologists and plant enthusiasts noted the land’s abundance of flora — especially the large-flowered white trillium, the state-endangered nodding trillium (Trillium cerium) and a host of other flowering plants, grasses and sedges deemed worthy of additional protection.

Marjorie Arundel, the namesake of what is more commonly called the Trillium Trail, was instrumental in the 1990s in negotiating special protection for about a third of the management area where these spring ephemerals are abundant.

At the time, it was the state’s first “registry site,” a designation acknowledging that the Virginia Department of Game and Inland Fisheries manages the land in consideration of the life cycle and habitat needs of these special plants. Today, the Virginia Native Plant Society supports the department’s work by helping with invasive plant removal and other tasks.

The agency uses selective forestry and field management to increase the “mast” of the forest — acorns, berries and other edibles attractive to deer, grouse and squirrels — which supports the wildlife that some visitors come to hunt.

“Sometimes, people are surprised that we allow hunting,” said Ron Hughes, lands and facilities manager for the DGIF. “But it’s actually because of the hunting that the trillium and other wildflowers are possible.” If deer became overly abundant, he said, they would devastate the trilliums.

“About one-third of the management area is what is called a ‘rich cove forest,’ and one that is unique because it’s on a mountaintop,” he said. Usually, these deep, moisture-retaining layers of topsoil are found in flatter areas but, at Thompson, this forest is found on the slopes along the ridge.

The forest also owes much of its diversity to the underlying Catoctin Formation. The bedrock is rich with magnesium, iron and calcium, and the area is nourished by springs.

A 100-acre section contains a rare seepage swamp that harbors species more commonly found in northern climates. Among them are northern black ash and several species of fern.

Joe Ferdinandsen, the site’s manager, said that Thompson is worth a visit in any season.

Spring showcases the wildflowers, but there are fewer crowds in the summer, even with the area’s proximity to Washington, DC. Fall brings outstanding foliage colors and the opportunity to spy raptors in migration. He especially enjoys winter. “I can see the lay of the land better,” he said, including the remnants of foundations that signal the past presence of human inhabitants.

On the leg of the trail that descends toward Thompson Lake, I paused to admire how seepage from underground springs was coalescing into tiny rivulets, winding through ferns, skunk cabbage and the spiked and flowered stems of false hellebore.

My eyes caught sight of a path worn up the shallow bank and into the woods. Investigating more closely, I came across a stand of yellow lady’s slipper orchids. Each pendulous yellow “slipper” emerged from fading red and yellow petals and sepals, dried and twisted like tissue paper.

Though these orchids are widely distributed throughout the eastern United States and Canada, their numbers are declining due to removal by poachers who sell to nurseries and by unknowing gardeners who try to augment their own gardens.

Alonso Abugattas, an Arlington County, VA, naturalist and native plant enthusiast who regularly leads hikes at the area, said he’s occasionally come across divots in the soil, indicating where orchids have been removed.

Sadly, transplanted orchids rarely take to their new locations. They have a symbiotic relationship with micro rhizome fungi species particular to their specific location, and the odds are very good that the transplant will kill them. “It’s such a short-sighted thing,” Abugattas said.

Abugattas encourages first-time visitors at Thompson to hike with a guide who knows when and where to find them. Like many other naturalists, Abugattas uses checklists, which make the hikes more like scavenger hunts for plants such as rue anemone, lousewort, golden ragwort, fleabane and others. If participants are birders, they’ll be on the watch for neo-tropical migrants: warblers, American redstarts, scarlet tanagers and the rose-breasted grosbeak.

Abugattas likes to include cultural and natural history facts as he walks and talks. “About 30 percent of the spring ephemerals in these woods depend on ants for propagation,” Abugattas said. Trillium is no exception; the crest of the seed attracts ants that disperse them while feasting.

Abugattas loves going to Thompson in the springtime, checking on individual plants that are, to him, like old friends. “I know where they are, and I go back to make sure they are still there,” he said.

The last leg of my circuit was on the Appalachian Trail, which traverses the length of the wildlife management area for 3 miles. The blazed path is narrow, strewn with roots and, during my visit, soggy from the previous week’s rain.

A hiker — the first person I’d seen all afternoon — stopped to let me pass. He asked about the trilliums, which he’d read about. As I pointed to a fading flower on the three-part stem, a pileated woodpecker flew overhead and drew our eyes upward. Even when your timing’s not quite right, there’s plenty more to see.

Leslie Middleton writes about water quality, public access, and the special places of the Chesapeake Bay region from her home in Charlottesville, Virginia.