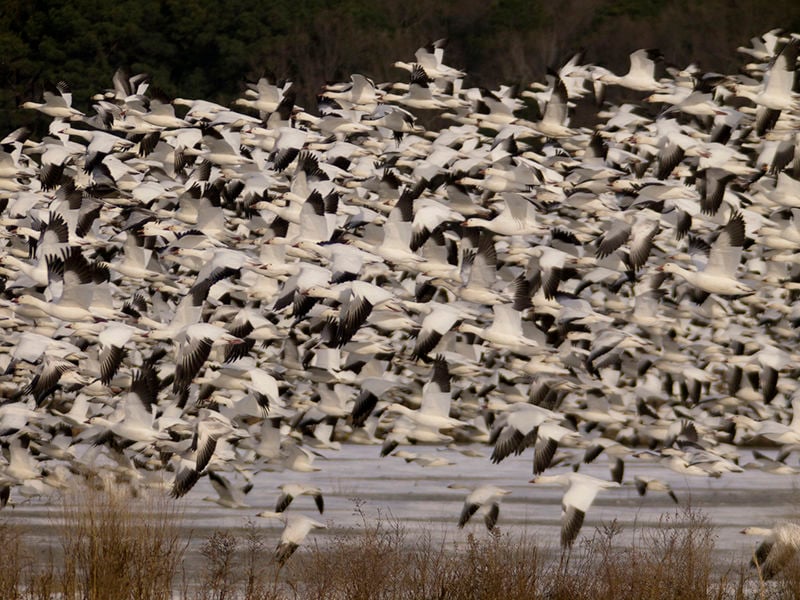 Snow geese take flight over the water at the Blackwater National Wildlife Refuge on Maryland’s Eastern Shore. The geese migrate south from the Canadian Arctic to spend the winter along the coast between Massachusetts and South Carolina. 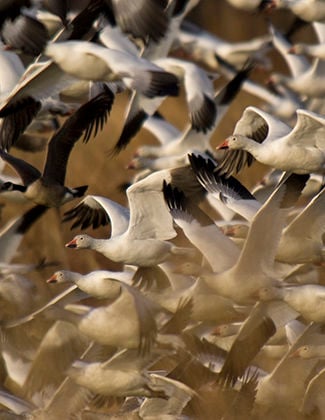 The snow goose population in Canada and the Eastern United States has rebounded from a low point in the early 1900s to approximately 1 million today. 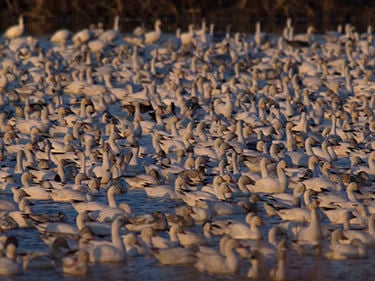 When birdwatchers flock to Blackwater National Wildlife Refuge on Maryland’s Eastern Shore this winter, they are likely to witness one of the most dramatic sights nature has to offer in the Chesapeake Bay region.

Snow geese will gather by the thousands in marshes and farm fields and on the water. Then, it will happen: an explosion of noise and color as the birds honk in unison and dart into the air at once.

“If you’ve seen them in a large flock in an agricultural field, they fly in unison like blackbirds do. When they’re swirling and shimmering on a field, it’s an amazing sight to see, a pretty large group of birds working together like that,” said Josh Homyack, waterfowl program manager for Maryland’s Department of Natural Resources.

“You tend to hear them before you see them,” said Matt Whitbeck, a U.S. Fish and Wildlife Service biologist based at Blackwater.

There’s a story behind the abundance of snow geese at Blackwater and other sites across the mid-Atlantic, one that casts the species’ showy displays in a different light. To understand how there came to be so many, it helps to start at Blackwater itself.

The refuge lies about 12 miles south of Cambridge along a swath of low-lying, soggy land dominated by tidal marsh and loblolly pine forests. Coupled with its proximity to corn and winter wheat farms, Blackwater is a prime resting and feeding area for winter waterfowl, such as Canada geese, tundra swans and, of course, snow geese.

One of the biggest attractions at Blackwater is its 4-mile Wildlife Drive, a two-lane road that bisects the most avian-populated portions of the refuge.

On any given day from October to April, visitors might see up to 11,000 snow geese (Anser caerulescens atlanticus) inside the southern Dorchester County refuge. The federal government established Blackwater in 1933 as a sanctuary for waterfowl like the snow goose, and that mission continues more than eight decades later.

Many of the management decisions made by the Fish and Wildlife Service, which operates the refuge system, revolve around rolling out the welcome mat for those birds. About 800 of the refuge’s acres are designed and maintained specifically to make those birds feel at home, Whitbeck said.

That acreage includes land where crops such as corn, clover and winter wheat are grown but not harvested — so they can become food for the birds. And it includes water impoundments, which are drawn down in the summer to encourage the growth of marsh plants for the birds to eat in the winter. The refuge’s workers also keep the area clear of phragmites, a stalky nonnative plant that chokes out nutritious natives.

“We think of it as setting the table for these waterfowl,” Whitbeck said.

White-bodied with black wing tips, snow geese cut a distinctive figure whether flying or foraging along the ground for tubers or roots. They spend their winters in a strip near the coast between Massachusetts and South Carolina. Come spring, they migrate to the Canadian Arctic, where they breed.

The dominant species in this Atlantic flyway is the greater snow goose. But sometimes birdwatchers may spot its cousin, the lesser snow goose, which is more common in the middle of the continent and in the West. Indeed, they are smaller, but the difference in size is nominal, Whitbeck said. The tell-tale sign of a lesser snow goose flock is the presence of a blue or dark version of the species sprinkled in with its otherwise white mates.

The snow goose population at Blackwater varies substantially from year to year, he added.

“They can be very hit-or-miss,” Whitbeck said. “Some years, we have 5,000 or 6,000 snow geese that will be present all season on the refuge, and other years we have zero.”

As of mid-December, Blackwater was still awaiting the full-scale seasonal return of its snow geese. Whitbeck recalled glimpsing a couple of flocks roosting on the water around sunrise for a few mornings in late November or early December. After dawn, they’d be gone, off to gobble up spilled corn in agricultural fields north of the refuge. But the birds soon disappeared as suddenly as they had appeared.

Weather seems to dictate where these nonhuman “snowbirds” settle for the winter, experts say. During warmer years, they may “short-stop” in southern Quebec. Colder temperatures may send them winging deep into the Carolinas.

“A lot of these birds, they’ll only come as far south as they have to,” Whitbeck said.

The time they spend in the southern portion of their range is no winter vacation, he said. Because the nesting season is so short, snow geese begin bonding into pairs before heading north. They also use the time to pack on as much fat as

possible. The energy they store up over the winter enables them to complete the long trip back north and to concentrate on nesting preparations once they get there.

“The birds are exploiting the productivity of the Arctic, but it’s only available for a short period of time,” said Kevin McGowan, a bird expert with the Cornell University Lab of Ornithology in New York.

By the 1930s, many waterfowl species were spiraling toward extinction. Without action, conservationists feared that the Canada goose, the snow goose and other water birds would soon go the way of the passenger pigeon, which was hunted out of existence in 1914.

Commercial hunting was taking a heavy toll on snow geese numbers in Canada and the Eastern United States. In the early 1900s, researchers estimated their population to be little more than 3,000 birds.

A snow goose hunting ban went into effect in 1931. Within a few years, the federal government began setting aside more than a dozen refuges, including Blackwater, to preserve marsh and farmland feeding grounds for the snow goose and other wintering waterfowl species.

The creation of the refuges triggered a chain of events that, slowly at first and then accelerating toward the end of the 1900s, brought snow geese back from the brink of extinction, researchers say. The result was the kind of turnaround that conservationists dream about, Homyack said.

But there was a problem: The actions worked too well.

“Eventually, it hit a certain point where [the snow goose population] just exploded,” he said.

The refuges and hunting prohibition stabilized the snow goose population, setting the stage for it to surpass 100,000 birds by the 1970s. During that decade, snow geese began changing their behavior in a way that ignited a gosling boom, Homyack said. They increasingly began feeding on the harvested cropland adjacent to the refuges instead of the marshes inside. That coincided with a sharp increase in corn production, giving the geese more opportunities to forage.

Wildlife managers responded to the snow goose’s growing numbers by reinstating hunting for the species. But the effect on the U.S. population was muted, according to background information in a Canadian Wildlife Service report. By then, warmer winters had driven flocks farther north in the winter, where hunting is less prevalent.

During the 1980s and ‘90s, the population was doubling every eight years. In 1998, Canadian and U.S. wildlife officials jointly declared that the species had become “overabundant.” Today, there are up to 1 million snow geese criss-crossing the flyway, according to the Canadian Wildlife Service.

The snow goose’s comeback has been so pronounced that scientists are now concerned that the birds may be setting themselves up for ecological disaster. For the last two decades, their habitat in the Canadian tundra has been showing signs of exhaustion under the stress of so many geese.

For now, though, these are heady times for snow goose fans at Blackwater and beyond. Their arrival draws birdwatchers and wildlife photographers from near and far. Unlike bald eagles and resident Canada geese, which live in the Chesapeake region year-round, the snow goose’s presence is fleeting.

“If you want to go out and see the snow geese in all their glory, there’s

no better time than now to do it,” Homyack said.

Where the snow geese are

Here are some prime places to spot snow geese in the Chesapeake Bay region: