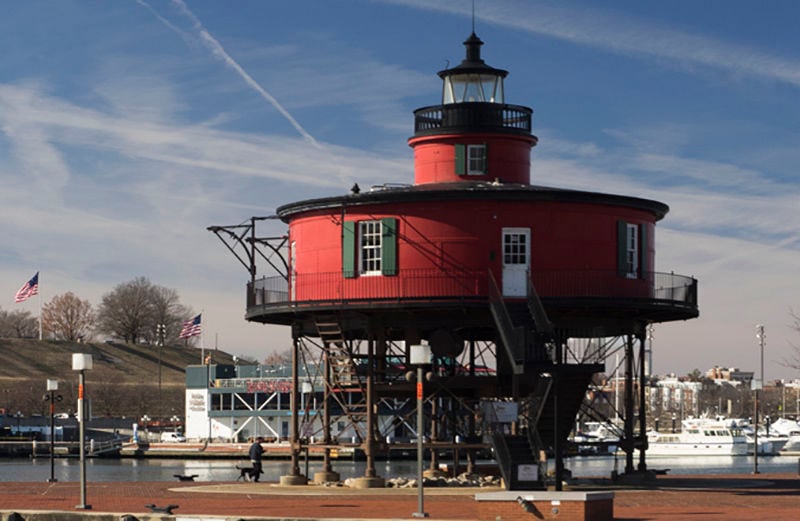 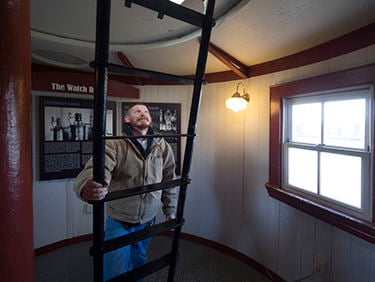 Brad Chandler, site manager of the Seven Foot Knoll Lighthouse for Historic Ships in Baltimore, prepares to check on the lantern room at the peak of the lighthouse, which once signaled to vessels from a shallow site at the mouth of the Patapsco River. 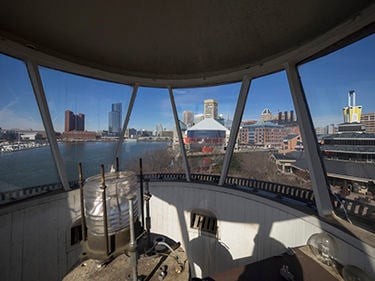 For safety reasons, visitors do not have access to the lantern room, but the view of Baltimore from behind its glass panes is shown in the photo above. 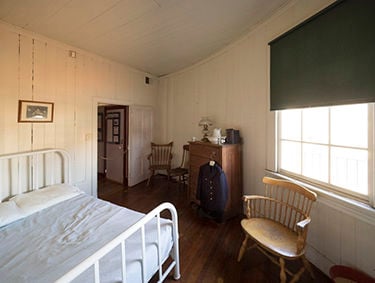 A bedroom in the lighthouse is furnished to show how it may have looked in the late 1800s. 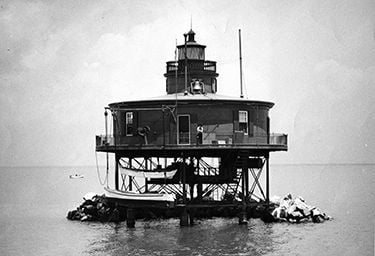 The Seven Foot Knoll Lighthouse is shown here in 1945 at the mouth of the Patapsco River. (US Coast Guard/Courtesy of Historic Ships in Baltimore)

For a number of reasons, all of which are profoundly uninteresting, in 30-some years of exploring and writing about the Chesapeake, I had until recently visited only three of Maryland’s four surviving “screwpile” lighthouses:

But the oldest of them all, the Seven Foot Knoll Lighthouse now residing at Baltimore’s Inner Harbor? Nope. Never mind that I’ve lived in Baltimore for much of that time, and that for a couple of years in the 1990s I could actually see it from the window of my office, no more than 1,000 feet away at the end of Pier 5.

In February, I corrected that shortcoming. The lighthouse opens to the public for the 2019 season on April 1, but I was lucky to score a preseason tour. I called Historic Ships in Baltimore, which manages the lighthouse and the Inner Harbor’s four other maritime history attractions: the USS Constellation, Coast Guard cutter Roger Taney, lightship Chesapeake and World War II submarine USS Torsk. A few days later I was climbing the lighthouse steps with site manager Brad Chandler.

The screwpile style of lighthouse first appeared in England in the early 1830s, developed by a blind Irish engineer named Alexander Mitchell. It was designed to stand offshore in relatively shallow water and got its name from its auger-tipped iron poles, or pilings, which were literally screwed into a bay or river bottom instead of driven in like nails. The design found its way to the United States in 1850, with the construction of the Brandywine Shoal Light in the Delaware Bay.

By 1855, Maryland had its first screwpile, built on and named after a shallow spot at the mouth of the Patapsco River, the Seven Foot Knoll. And the Chesapeake as whole fairly blossomed with them. According to The Mariners Museum in Newport News, VA, 42 screwpile lighthouses were built on the Chesapeake Bay between 1850 and 1900 — more than anywhere else in the world. Sadly, none of those built in Virginia have survived. The screwpile was especially vulnerable to fast-moving ice floes, which is the chief reason so few remain on the occasionally frozen Bay.

Aside from being perched about 20 feet in the air on its pilings, the Seven Foot Knoll Lighthouse is an architectural older cousin, not a sibling, of Maryland’s other remaining screwpiles. Unlike the hexagonal, one-and-a-half-story clapboard cottage design of the others, the Seven Foot Knoll is a squat, red, turret-like affair with iron-plate walls and a wrap-around iron balcony, or gallery deck.

Perched in the center of its nearly flat roof is another much smaller turret, the so-called watch room, with a ceiling hatch leading to the all-important “lantern.” That’s the technical term for the small glassed-in room at the building’s vertex that houses the light itself. The lamp was first fueled by whale oil, then kerosene, then the more efficient incandescent oil vapor before finally being converted to electricity when the light was automated in 1949.

The lighthouse also differs from its Chesapeake cousins on the inside: It’s more spacious. It has two large, end-on-end rooms through the middle (one of them large enough to accommodate a piano, recalled one lighthouse keeper’s daughter who lived there in the 1870s), with a sizable kitchen on one side and pair of wedge-shaped bedrooms on the other.

But for all of its elbow room, and in fact because of it, the lighthouse was challenging and comparatively expensive to heat. It was designed to have two coal-burning stoves — one for cooking and one for heating — but at some point in the late 1800s, the heating stove was removed to cut down on fuel costs, making it a very unpleasant place to be in the dead of winter, Chandler told me as we explored the main level.

“[Seven Foot Shoal] was a bit unique,” he said, “It’s such a large floor area [that] their fuel consumption for the stove was much higher than pretty much every other lighthouse.”

A 1916 report from the 5th Lighthouse District’s chief inspector bears this out and pinpoints a time when the problem appears to have been at least temporarily solved.

“[T]his difficulty,” the inspector wrote, addressing the fact that six assistant keepers had come and gone in the previous three years, “is in great measure due to the extremely uncomfortable condition of the station during the winter months on account of cold…. It appears that the station was originally provided with a heating stove in addition to the cook stove, but [the heating stove was removed because] the fuel allowance was insufficient to run two stoves during the winter.”

On the inspector’s recommendation, the heating stove was reinstalled, and the lighthouse’s coal allowance was increased from four tons a year to six.

Aside from one of the bedrooms — which is furnished as it might have looked in the late 1800s, complete with a lighthouse keeper’s uniform hung neatly on the front of a chest of drawers — the lighthouse space is devoted almost entirely to displays. They cover the lighthouse’s history, design and systems, of course, but also Bay steamboats, ferries and workboats, Baltimore’s history as a seaport, and the time it was a southern version of Ellis Island, a port of entry for countless European immigrants in the latter half of the 1800s and very early 1900s.

And there’s the story of lightkeeper Thomas Steinhise — who, on a dangerously stormy night in late August 1933, heard distress signals from a foundering tugboat nearby. Steinhise and his son, Earl, climbed into a 21-foot launch and half-rowed and half-motored out to the tug (the violent seas repeatedly swamped the engine) and pulled six men out of the water, one of them already dead. As Steinhise rowed and motored the five survivors back to the lighthouse, another tug came along and rescued the remaining crew, limiting the loss of life to just one.

The lightkeeper’s bravery earned him a silver lifesaving medal from the U.S. Commerce Department, then the parent agency of the Lighthouse Service. It also earned him some fame; in the display at the lighthouse there’s a photo of him, presumably playing himself in a 1936 radio recreation of the incident.

Steinhise’s heroism also apparently postponed the automation of the light for a dozen years. In 1936, even though the district’s chief engineer had deemed the Seven Foot Knoll Lighthouse a prime candidate for automation because of its “minor importance as a general aid to navigation,” the district’s deputy commissioner decided to keep it manned, citing “local interests [that] would apparently be strongly opposed to such action because of life saving services rendered in the past by this station.”

The light remained manned until 1948, with Steinhise serving as keeper until his retirement in 1941. It was automated in 1949 and, as was the case with so many lighthouses of that time, it gradually fell into disrepair — and defacement by teenagers, who used it as a weekend party spot. “I’ve had so many people come through here saying they remember seeing it out there,” Chandler said, “and how kids would go out there and party. The Coast Guard would come along every so often to maintain the light and they’d change the locks ... and then it would happen all over again.”

The Coast Guard finally washed its hands of the lighthouse in 1969, offering to donate it to Virginia’s Mariners Museum. But that fell through when the company hired to transport it went bankrupt. The museum released its claim in 1975, and the light lay fallow for another 13 years — until the city of Baltimore, with its freshly redeveloped waterfront, bought the lighthouse and had it moved to

Pier 5 in October 1988. Blowtorchwielding divers cut the pilings at the water line, and the lighthouse was sailed 14 miles upriver, dangling from a giant barge-mounted crane, to its new shoreside home.

And there it has sat for 30 years, delighting lighthouse aficionados daily and patiently waiting for me to visit. And now I can finally say “Seven Foot Knoll Lighthouse, check.”

For information on the Seven Foot Knoll Lighthouse, now located at Baltimore’s Inner Harbor, visit historicships.org. The adult admission fee is $15 for a “squadron pass” to visit any two any of the Historic Ships attractions and $18 for a “fleet pass” to visit up to four sites.

The lighthouse is open to the public seven days a week from April to Dec. 31, excluding Christmas Eve, Christmas Day and New Year’s Day. It opens at 10 a.m. and closes at 4:30, 5 or 6 p.m., depending on the season.