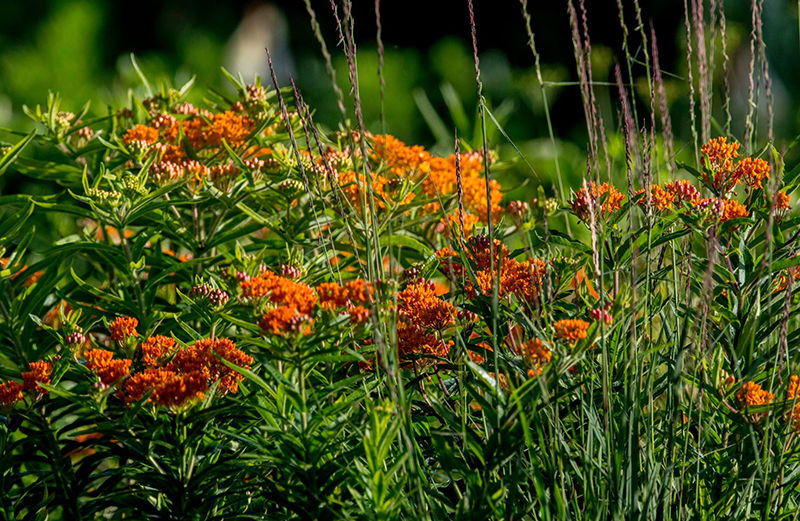 Approximately 100 acres at Pleasant Grove Park, located along Virginia’s Rivanna River, have been transformed into habitat for birds, butterflies, and other pollinators and wildlife. (Stan Kaslusky) 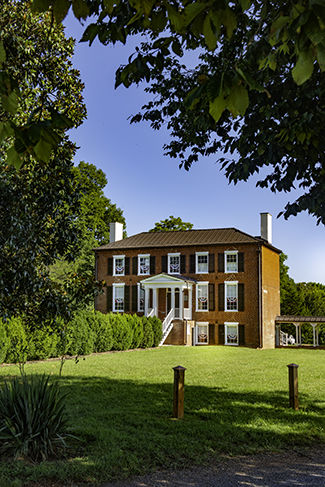 The stately 1854 Haden House has been restored to highlight the architectural features of its time. (Stan Kaslusky) 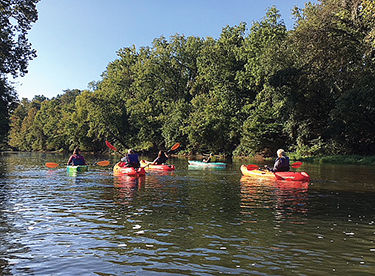 Pleasant Grove Park is bounded for 3 miles by the Rivanna River. The park offers canoe and kayak rentals. (Fluvanna County Parks and Recreation) 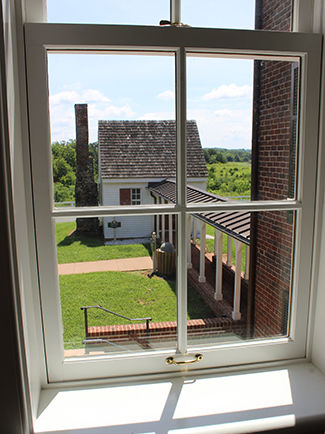 In the small central Virginia county of Fluvanna, a triangle of historic farm and forest is wedged between the Rivanna River and Virginia Highway 53, just 20 miles southeast of Charlottesville.

At the western end stands a three-story story brick house, built in 1854 by Col. William Haden where he raised 12 children and managed a plantation of approximately 3,000 acres. In those days, the river connected the Haden family to the world — and markets — beyond their home.

Today, 830 acres of the original Haden land have become Pleasant Grove Park, named after the original plantation, connecting visitors from near and far to the river, local history and the natural world.

For thousands of years, the Rivanna River (which bisects Fluvanna County) and James River (which marks its southern boundary) were thoroughfares. The Monacan Indians, a Siouan tribe, had settlements on both rivers, including Rassawek, once located 14 miles downstream from the current park at the confluence of the two rivers.

When the English began to colonize the land upstream from Jamestown, they called the James River above that confluence the Fluvanna or “River of Anne,” for the English Queen. They also named the smaller river, the Rivanna, in her honor.

Haden’s plantation, established about 200 years later, hugged the Rivanna shoreline and took advantage of a series of dams constructed by the time Hayden built his home. The dams created flatwater impoundments, allowing the passage of people and farm products and powering  of gristmills along the river.

Pleasant Grove Park stretches along 3 miles of the Rivanna, just downstream of an S-curve where the river cuts through rocky outcroppings. The park has more than 20 miles of trails that are part of the Virginia Birding and Wildlife Trail. They wind through meadows managed for birds and other wildlife, as well as fields on their way to becoming forests. Some trails are for equestrians. The park provides handouts: nature activities for all ages, trail guides and checklists for birds, plants and butterflies.

Walter Hussey, a former federal program manager from the District of Columbia area, is an enthusiastic master naturalist and master gardener who helps tend the land at Pleasant Grove Park and coordinate its many volunteers.

Together, they have transformed more than 100 acres of parkland into bobwhite quail habitat, hedgerows and pollinator demonstration gardens.

“We’re basically trying to enhance the natural experience at the park,” Hussey said, “and increase the wildlife diversity.” Some projects showcase how homeowners can create small butterfly gardens in their front yards and how farmers can border their fields with vegetated strips to increase game and decrease runoff.

The Heritage Trail, one of Hussey’s favorites, was one of the first to be built. It’s named for the Heritage Trail Foundation, which is responsible for establishing this and other trails in the park. The trail follows the Rivanna River for almost 3 miles from a parking lot at the Eastern Trailhead to the Western Trailhead close to the Haden House parking.

Much of the trail traverses a forested bluff above the river, occasionally dipping down to cross one of the smaller creeks entering the river. Bridges help hikers over soggy ground through tall stands of Joe Pye weed, which in some years have drawn thousands of migrating monarchs.

“The river here is kind of slow and easy,” Hussey said. “And you don’t see another farm, house, condo or office building, only the river.”

But you might see canoeists and kayakers traveling downriver or stopping to play in the shallows. Many paddlers put in at the Crofton Landing 6 miles upstream from the park and take out just below the park at the Palmyra landing. Parks and Recreation staff can provide boats and even a shuttle for a small fee.

On the opposite side of the river, hikers on the Heritage Rail Trail can often be heard through the leafy branches overhanging the river. This half-mile ADA-accessible trail follows the former route of the Virginia Air Line Railway, a popular local spur that connected Fluvanna residents to Charlottesville and Richmond through the 1930s.

Parking for the rail trail is across the river from Pleasant Grove in the small village square of Palmyra, the county seat, which is also well worth a visit, especially for history enthusiasts and genealogists. It includes the Old Stone Jail, a museum run by the Fluvanna County Historical Society, and “Maggie’s House,” the society’s offices and archives.

“We’re fortunate,” said Tricia Johnson, executive director of the society. “Our records are intact back to 1777, unlike [those of] many Southern towns whose public buildings were ravaged during the Civil War.”

People who come to the museum and archives, Johnson said, “are astonished at the richness and depth of history here — and how available it is.”

Connections are deep and sometimes surprising. “Many times people come looking for their ancestors, only to find that a descendent of that ancestor is here volunteering,” Johnson said.

Historic society members serve as docents at the Old Stone Jail and Maggie’s House, as well as the Haden House at Pleasant Grove Park.

While the Haden family is not as storied as Thomas Jefferson, who presided at Monticello near Charlottesville, nor as prosperous as other plantation owners in the county, the Haden House shows that the family benefited from the wealth of the land and those who labored on it – many of whom were enslaved.

“The house was by any stretch of the imagination a rather imposing residence,” said Marvin Moss, president of both the Fluvanna County Historical Society and Fluvanna Heritage Trail Foundation. The two groups have been instrumental in raising private funds and securing grants for the park and its historic amenities over the last two decades, including restoration of Haden House.

The house has both Greek revival features and traditional Federalist style details, and it now boasts a two-story modern addition, rendered historically accurate  and environmentally sensitive by W. Douglas Gilpin, Jr., a restoration architect from Charlottesville.

The addition, Moss said, “is a little more sophisticated than the Pleasant Grove House, but it fits in beautifully.” It also includes modern features, such as geothermal heating and cooling and an elevator, as well as a kitchen for the events that groups host year-round at the park.

Like the park itself, the small but elegant house serves multiple uses — the third floor provides staff offices, and the first floor is the county’s welcome center.

The second floor houses two rooms of the small but delightful transportation exhibit, “On the Move: Rivers, Roads, and Rails.”

The permanent exhibit includes models of the evolving watercraft used to transport crops and people: first, the double dugout canoe; then the batteau, developed after a 17

71 flood destroyed many of the canoes; and finally canal boats. Each required more sophisticated ways to tame the flow of the Rivanna.

Museum attendant Brian Coffield likes to highlight the replica hogshead barrel that anchors one corner of the exhibit room.

Such round, planked containers were used to transport tobacco from fields to boats, moving along crude farm roads and then onto increasingly larger boats on the way downriver and across the ocean. “We built this to give people a sense of scale,” he said. A typical hogshead was packed so tight it could weigh as much as 1,000 pounds.

Coffield is well-suited to talk about local watercraft of the 1700 and 1800s. Every year he captains his own modern replica of a batteau, the Queen Anne, in the annual summer James River Batteau Festival, a 10-day re-enactment journey down the James.

One artifact, carefully displayed in the center of the room, is part of an 1850-era batteau recovered by Virginia Canals and Navigation Society volunteers from a mud bank along the Rivanna River in 1996.

Even on a humid, gray, summer morning, the museum’s tall windows ensure that models, maps and photos are drenched with natural light that seems to invite the visitor outside.

On the grounds of the house, centuries-old boxwoods — remnants of the original English garden — flank the brick path from the home’s front portico. The Haden family cemetery lies under towering oak trees between the lawn and restored meadow.

A covered walkway leads from the side entrance of the house to a separate building called the “summer kitchen,” where enslaved servants prepared food for the family.

The summer kitchen is now the headquarters for the park’s many nature programs and projects, with shelves of animal skulls, feathers, and leaf and plant identification keys.

Moss is unabashedly proud of the offerings that he and other devoted locals helped to make possible at the park. “I think it’s probably one of the best county parks in all of central Virginia,” he said.

Historic society director Johnson thinks this is because the county has struck the appropriate balance for honoring and respecting the past while looking ahead to the future.

At Pleasant Grove Park, historic preservation, recreation and wildlife enhancement are woven together to provide something for everyone — plants, pollinators and people who come to soak up fresh air, green spaces and history.

Pleasant Grove Park is located near the town of Palmyra in Fluvanna County, VA. Park grounds are open dawn to dusk daily. The Haden House museum is generally open 8 a.m. to 5 p.m. Monday to Friday and 12–4 p.m. Saturday to Sunday. Hours may vary by season so check before visiting by calling 434-589-2016. Admission to both the park and museum is free. The park offers canoe and kayak rentals, as well as a shuttle service. Call for information.

Annual events include the Old Farm Day, next set for May 4, 2019. For information, visit oldfarmday.org.

For information about the Fluvanna Historical Society, visit fluvannahistory.org.

Leslie Middleton is a freelance writer based in Virginia.