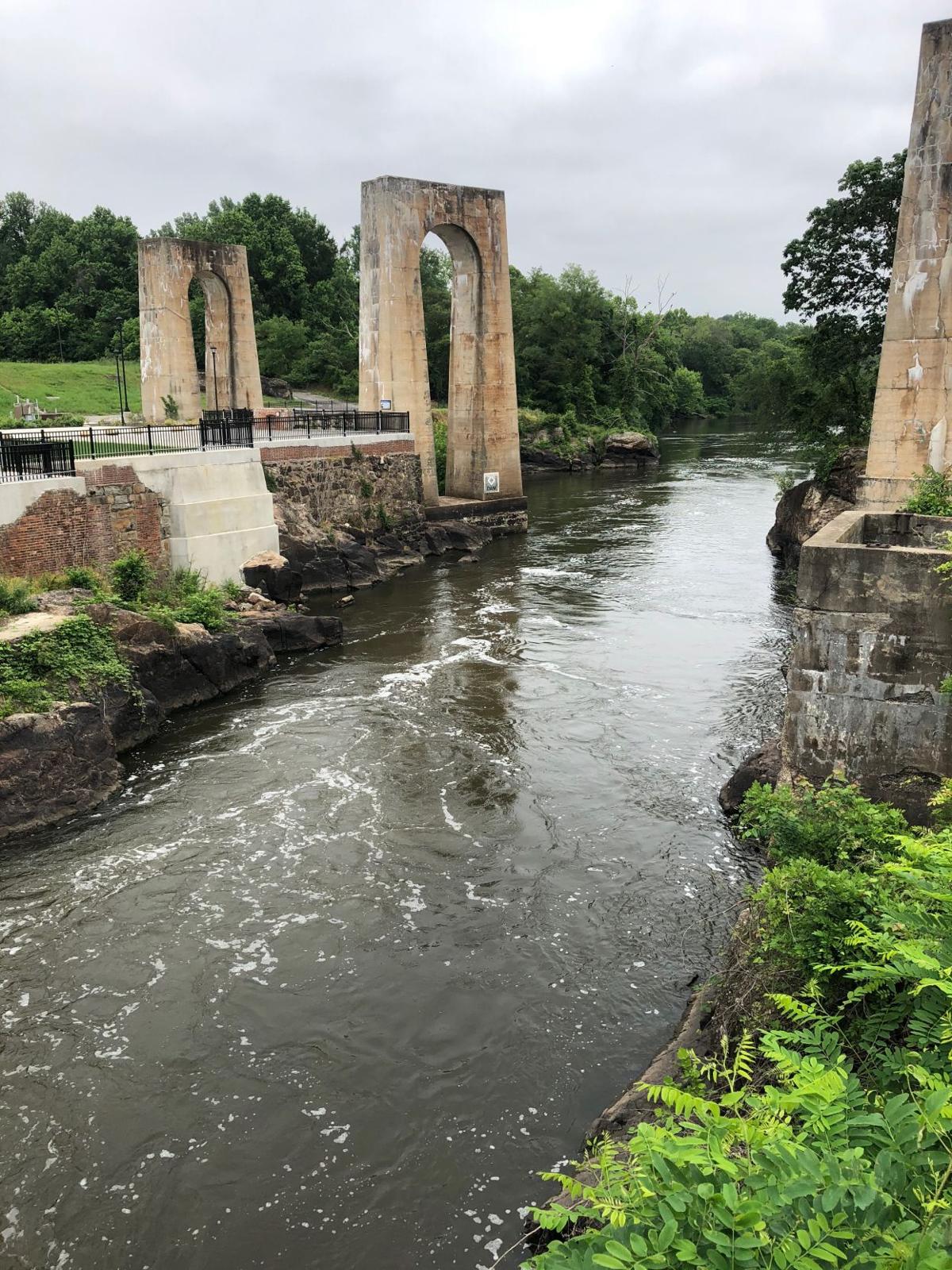 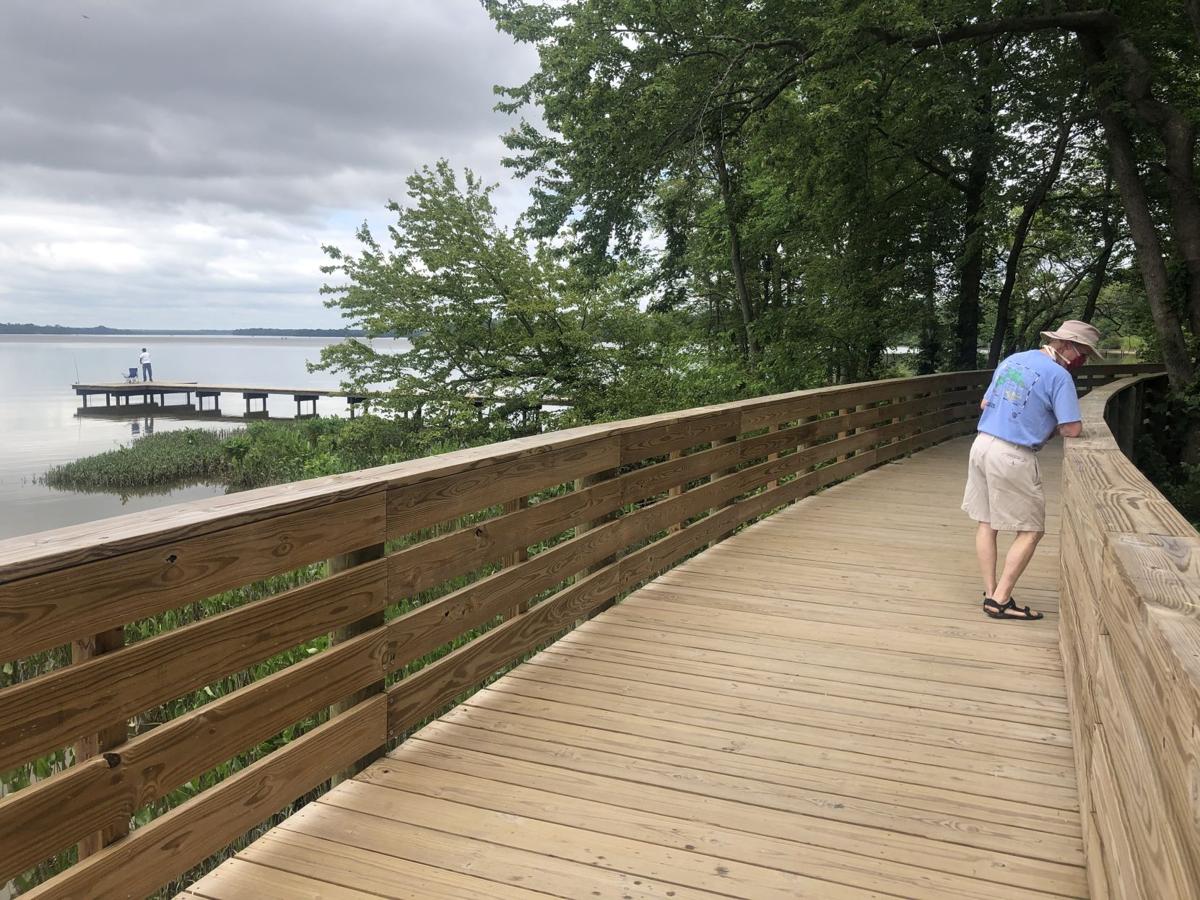 The Hopewell Riverwalk offers an intimate view of the tidal shoreline and broad bay where the Appomattox meets the James River. 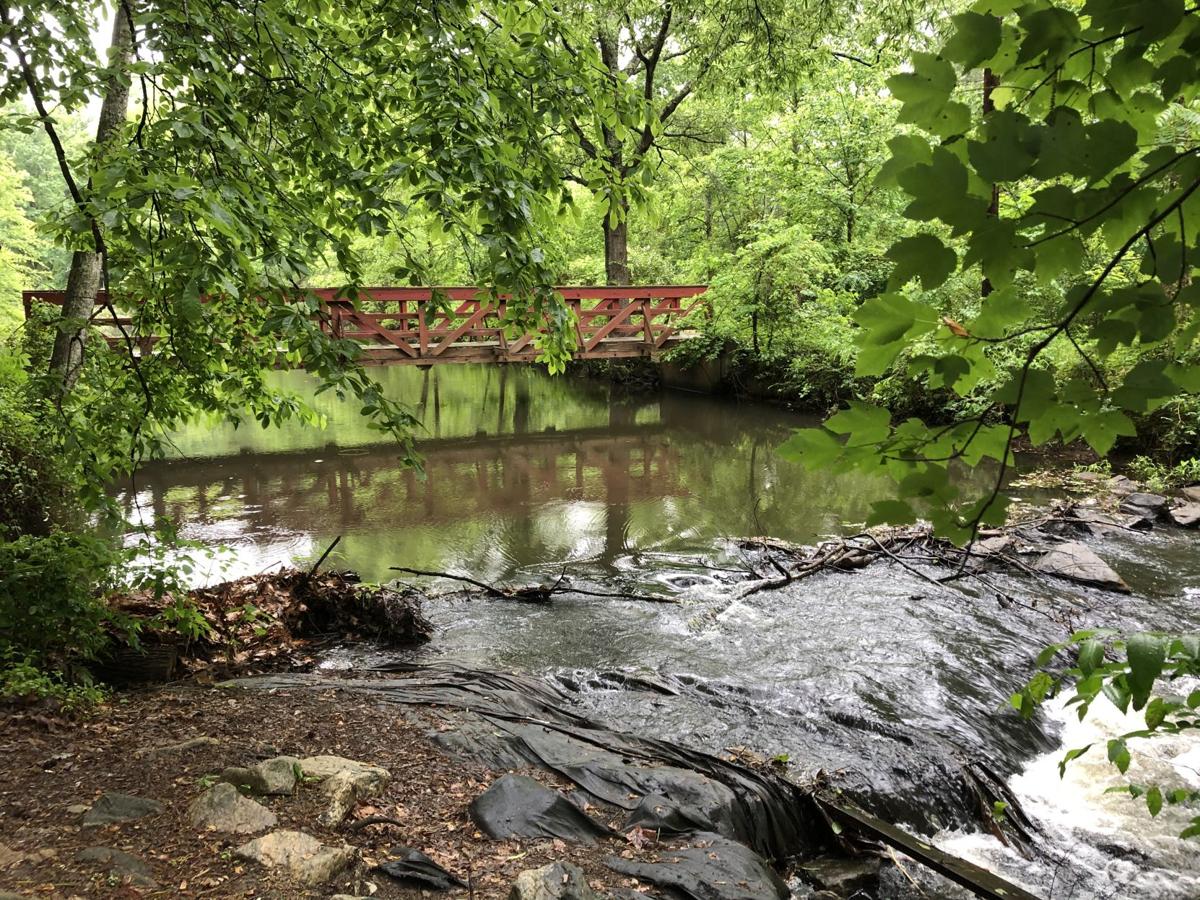 A foot bridge carries hikers across the water at Appomattox Riverside Park in Petersburg, VA. 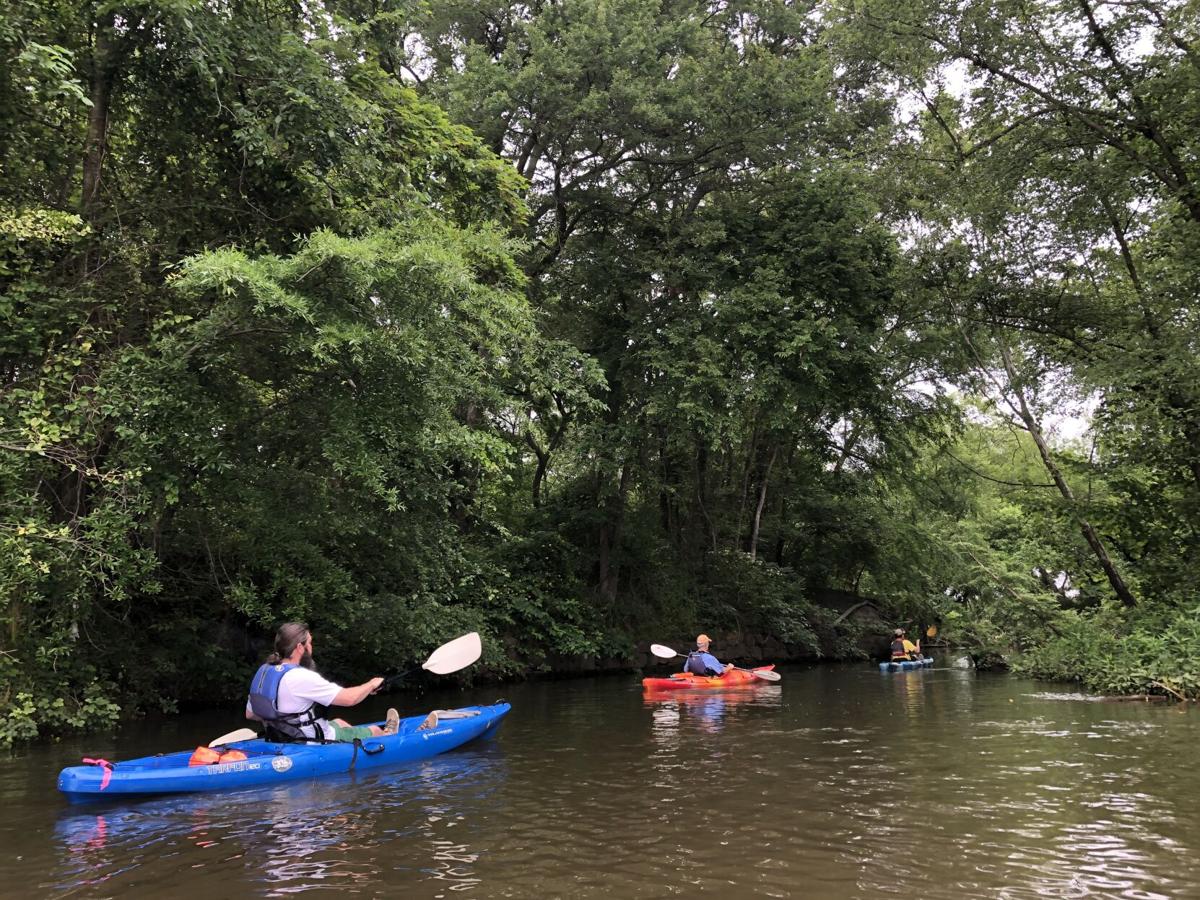 Paddlers explore Virginia’s Appomattox River, which flows into the James River near Hopewell.

The Appomattox River in Virginia has long been a river I’ve wanted to explore. Its name conjured up associations with the Civil War, but otherwise I knew little about it. Lucky for me, a water trail helped me to tackle the adventure.

The Appomattox is the largest tributary on the tidal portion of the James River, originating near Appomattox Courthouse where Confederate Gen. Robert Lee surrendered to U.S. Gen. Ulysses S. Grant in 1865. It flows roughly east 146 miles to join the James at the city of Hopewell, 20 river miles downstream from Richmond.

With close to a dozen possible small boat launch sites on the tidal section alone, I was grateful for some local knowledge. On a cloudy May morning, Brad Flynn and Aaron Reidmiller from Hopewell’s parks and recreation department introduced me and my husband to two sections of this river, starting in Petersburg.

We put in at Pocahontas Island — a slender peninsula adjacent to the cobbled streets of Old Town Petersburg — and paddled upstream past remnants of the river’s rich history. Signs of modern urban progress were visible through the dense green foliage of trees and shrubs anchoring the banks and muffling Route 301.

We paddled underneath the roadway on our half-mile trip up the river, with hopes of glimpsing one of the oldest known Native American fishing weirs, a stone structure built to catch Atlantic sturgeon and other species. Local lore says that

this is where the Appomattoc Indians shared knowledge about the river’s bounty with the English colonists.

fall line where the river turns tidal. Above us, an osprey reported a successful catch as it winged away, fish in talons. A long-nosed gar left a broad splash in the rapids. A fisherman on the bank pulled a striped bass to shore.

Flynn pointed to a pillow of swirling water that was likely marking the fish weir below the surface. “You can really see it well at lower water,” he said.

Here, too, we saw the rubble remains of the Harvell Dam, one of many obstructions that channeled the river for navigation and harnessed its power for mills and electricity from colonial times to the present. The dam was removed in 2014 to enable fish passage.

We turned and floated back downstream. From time to time, a break in the trees revealed walkers on the Appomattox River Trail, a 22-mile bike-and-walking trail system flanking the river. The trail is a project of the Friends of the Lower Appomattox River, a 20-year partnership between the cities and counties bordering the river. This includes Hopewell, which offers multiple programs that promote healthy choices, including on-the-water activities for youths and adults.

The friends group also maintains an online mapping tool showing river access points for hiking, paddling and fishing. We floated past one of them: Appamatuck Park at Colonial Heights, on the north side of the river near a parking lot and trailheads.

The spelling of the park’s name honors the river valley’s original inhabitants, the Algonquin-speaking Appomattoc, encountered by Christopher Newport in 1607 and Capt. John Smith in 1608. Smith’s spelling of the tribe’s name, “Appamatuck,” is reflected on a historic map that shows the limits of the Smith’s travels in the Chesapeake region, as well the location of bronze crosses he used to mark them. A replica of this cross was installed at the park in 2016.

After loading our boats back onto our vehicles, we caravanned COVID 19-style in separate vehicles through the streets of Pocahontas Island, the historic commercial hub on what was once Petersburg Harbor. Here, free and enslaved African Americans toiled on the water and in tobacco warehouses.

By the Civil War, the island was home to the largest settlement of free African Americans in the region who lived side-by-side with Quakers and other abolitionists. Several structures still standing in adjacent old town Petersburg served as shelters on the Underground Railroad, a network of routes and safe houses that helped people escape slavery.

Campbell Bridge at the north end of Pocahontas Island is a perfect spot to view the river frothing through Narrow Falls, a rocky chasm ending in a churning whirlpool. For 7 miles above these narrows, the river tumbles through intermittent drops sufficient to power the many factories and mills that once crowded its banks. Today, rapids with names like Jughandle, Spiked Dam and Target Rock lure whitewater paddlers.

But even this section of the river offers multiple access points for hiking and fishing, along with a 1.5-mile section of the 1810-era Appomattox Canal system that offers paddlers a flatwater route to bypass some of the rapids.

Today’s maps of the lower Appomattox show multiple channels, remnants of canals dug for upstream navigation or diversion to power cotton and grain mills. Other channels were built to bypass river sections prone to shoaling.

Benjamin Uzel, president of the Colonial Heights Historic Society, has researched these historic changes. Uzel said that the river below Petersburg has undergone at least three re-routings. Evidence of this and the multiple railroad lines serving the area are found along the river in remnants of stonework, brick and concrete.

From Campbell Bridge, we drove 20 minutes to White Bank Park and a small boat launch onto Swift Creek, a 45-mile tributary that joins the Appomattox River just west of Interstate 295 and barely 5 miles above the James.

We slid our kayaks onto the dark waters of the tidal freshwater marsh, its channel lined with dense rafts of arrow arum and pickerelweed. Within minutes, we ducked under low-hanging branches to enter the Swift Creek Conservation Area, a 495-acre undeveloped and mostly swampy natural area owned by Chesterfield County.

The waterway soon opened up into a series of longitudinal ponds interspersed with islands, some barely large enough for a scrubby bush of viburnum, others large enough to grow a few trees. Much of the area was actively mined for sand and gravel until recently, but now nature is certainly having its way.

With the help of GPS, we navigated a route through an intriguing maze of channels, past cul-de-sacs that dead-ended onto scant deposits of earth sporting bright spots of yellow and purple irises. Woodpeckers rattled hollow tree trunks in the drowned landscapes as we circled a small island draped in the pink blossoms of wild azalea.

Multiple birdhouses perched on metal poles rose out of the swamp. Tidal wetlands on the Appomattox and nearby James River are one of the spring destinations of scores of brightly colored yellow prothonotary warblers migrating from South American. The bird boxes have facilitated years of research by local biologists and birders.

The lower Appomattox also hosts an isolated population of water moccasins (or cottonmouths). As we traversed the wetlands that felt increasingly primeval, we shared stories of encounters with the only venomous water snake in Virginia.

But Susan Watson, a biologist with the Virginia Department of Wildlife Resources (formerly the Department of Game and Inland Fisheries), said their presence shouldn’t keep paddlers away. “These snakes have no interest in biting or attacking humans. They simply are not aggressive,” she said, though they may be provoked if they feel threatened.

Stories of water moccasins coming after paddlers can be attributed to the snakes’ curiosity or mistaking a boat as a potential place to haul out and sun themselves. In fact, Watson said, we should be grateful for their habit of showing their fangs — it’s a warning and one we should heed.

The possible presence of snakes reminded me how easily we can forget that the wildness we seek — and that conservation areas like Swift Creek offer — comes with the responsibility to be informed paddlers, armed with the knowledge of river obstructions, tides, and the plants and animals that make their homes here.

After thanking our guides, my husband and I drove to Hopewell’s Old City Point Waterfront Park where the Appomattox widens into a broad bay as it meets the James River. The high bluffs on the southern shore there have provided a strategic vantage point through the centuries. Sir Thomas Dale, governor of the Jamestown colony at various times between 1611 and 1616, explored the possibility of moving the Jamestown settlement to Hopewell. Though that idea never took hold, Hopewell is the oldest continuously inhabited English settlement in the United States.

Just upriver from Old City Point, Appomattox House commands a wide view of both rivers. From here, Grant plotted the final months of the Civil War as Union troops laid siege to Confederate troops in Petersburg, transforming Hopewell into a busy Union supply base. President Lincoln visited the site twice.

From historic cities and canals to woodlands and wildlife, it turns out that my curiosity about this river was well-founded. After sampling just a few of the river’s offerings, I wasn’t disappointed. The lower Appomattox flows through a rich and varied landscape, washed by the changing tides of water and time, with shoreline communities committed to providing residents and visitors abundant options for river time.