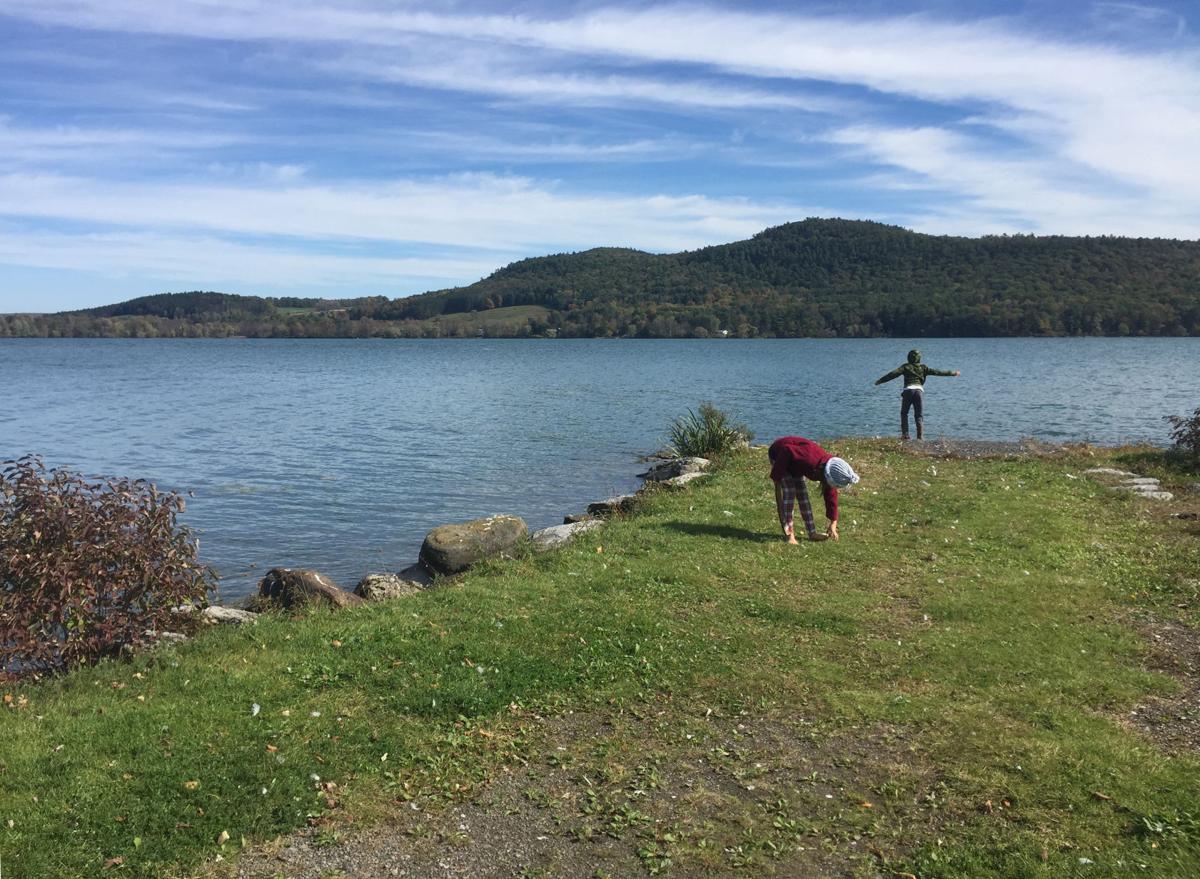 Otsego Lake in New York state is the source of the Susquehanna River, one of the largest tributaries to the Chesapeake Bay. Much of the landscape along its shoreline remains undeveloped, providing plenty of outdoor opportunities. 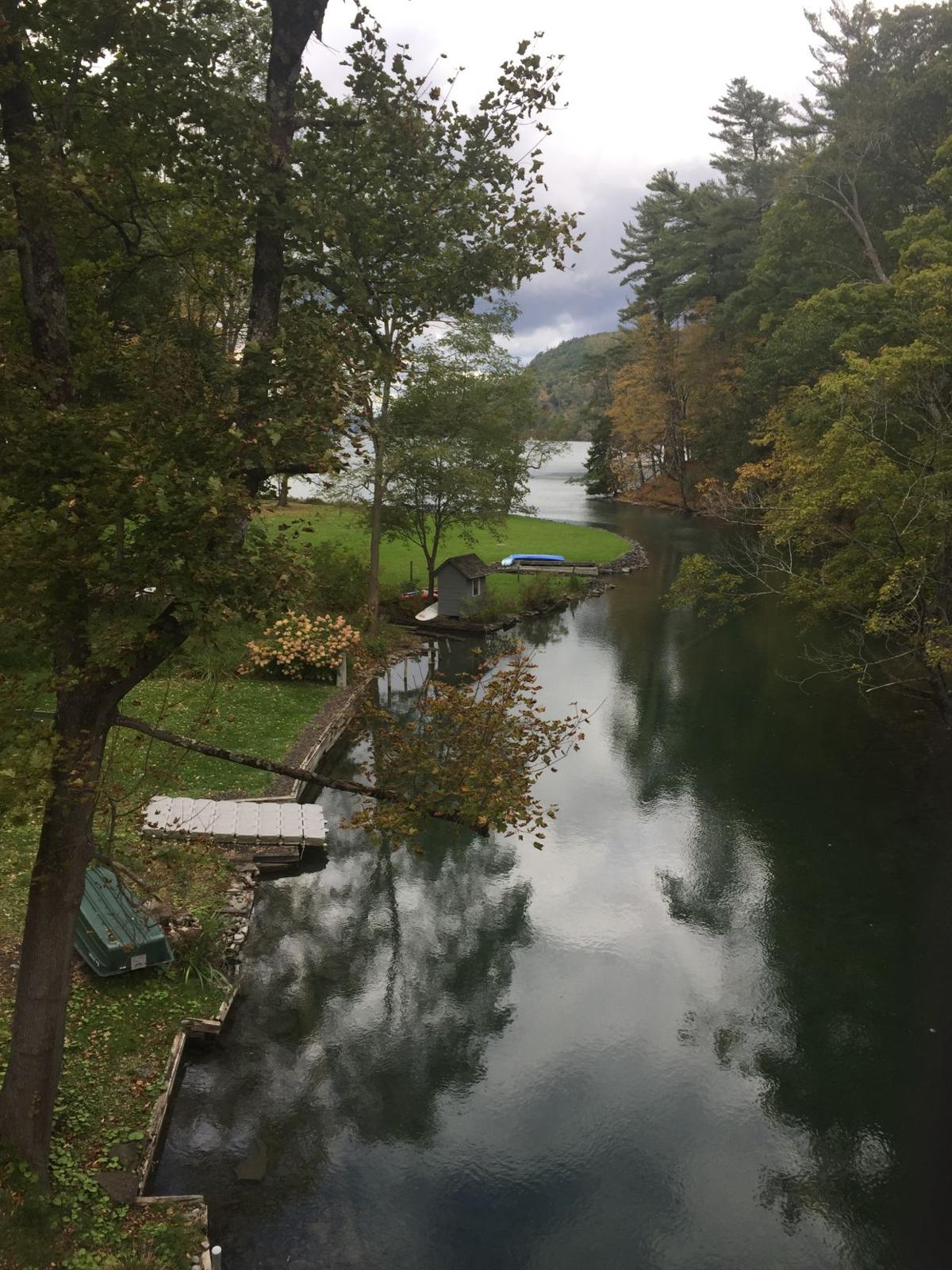 This narrow band of water flowing from Otsego Lake in upstate New York is the beginning of the Susquehanna River, which travels more than 400 miles to empty into the Chesapeake Bay at Havre de Grace, MD. 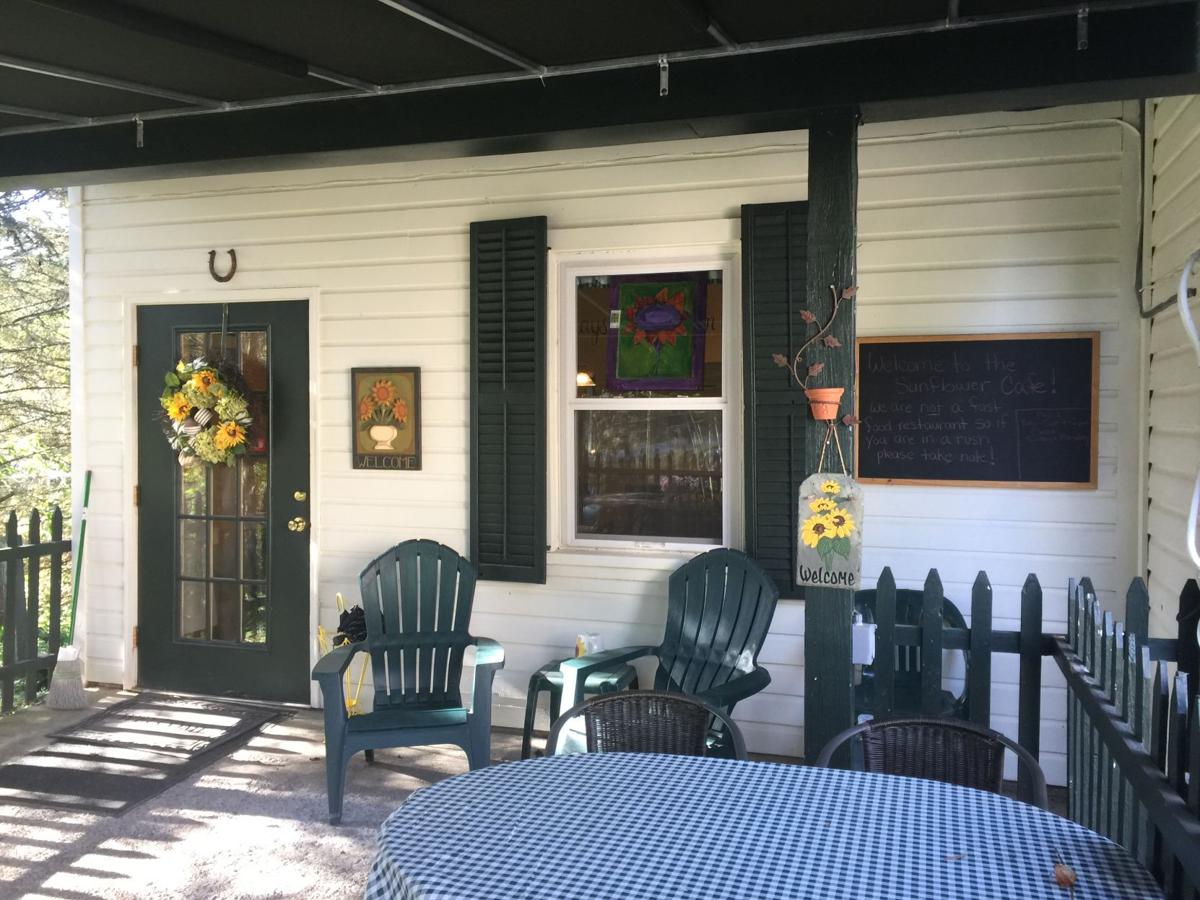 The Sunflower Cafe, which can be found enroute from Cooperstown, NY, to Glimmerglass State Park on Ostego Lake, is a quaint stop for locally sourced food. 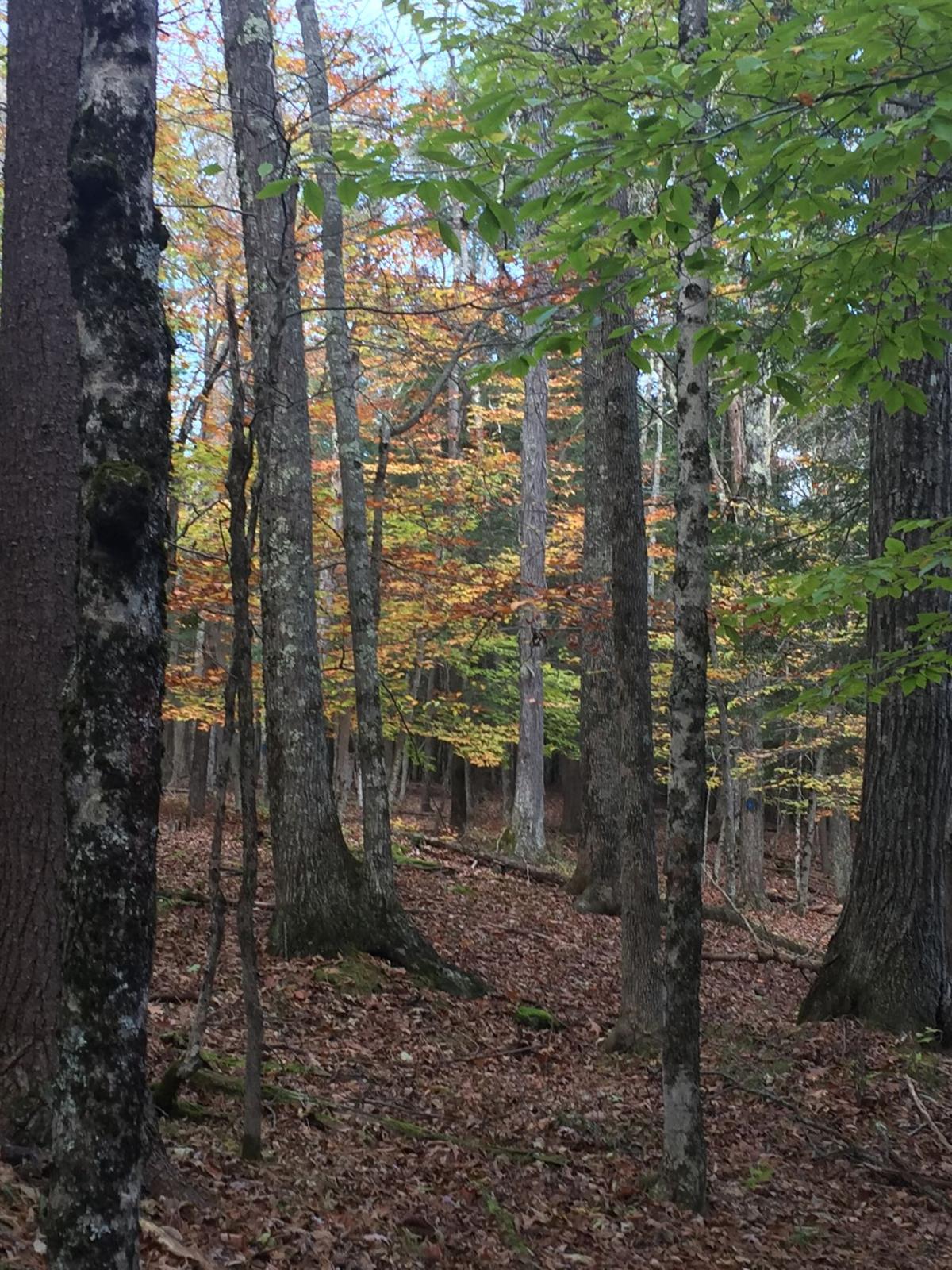 Forested trails in Glimmerglass State Park are a good way to explore the landscape around New York state’s Otsego Lake. The lake and surrounding area are known for inspiring some of the settings in The Leatherstocking Tales, a series of novels published in the 1800s that feature the fictional frontiersman Natty Bumppo.

The Susquehanna River starts its 444-mile journey as a lazy creek in Cooperstown, NY. It begins as an outflow from Otsego Lake, where its southern tip abuts the town.

It then flows slowly under the Main Street Bridge before rounding a bend toward downstream destinations — farms, towns and cities in central New York and Pennsylvania — and ultimately reaching the Chesapeake Bay in Maryland.

Looking eastward from the bridge — minutes away from the world-famous National Baseball Hall of Fame — you can see the first few 100 feet of that narrow slip of water with the lake and distant mountains as backdrop. It’s a lovely postcard scene. When I took in the view this fall, I found it hard to believe that this small, clear stream, reflecting the faded color of the trees back at me, becomes a mile-wide river by the time it reaches Harrisburg.

Late autumn is a quiet time in this part of New York — a few weeks of crisp days, bright blue skies and maybe a few snow flurries that don’t stick — before the deep freeze of an upstate winter. In the small, quaint village of Cooperstown, the intense bustle of summer tourism is over and the last leaf peeper has gone home. Of course, the National Baseball Hall of Fame was still humming. About 300,000 visitors from around the world make it their destination each year. Neighborly greetings filled the air as the local population took back its town and enjoyed a meal or a beer. The restaurants and bars had their televisions tuned to the playoffs.

The hills and valleys that give rise to both the lake and the Susquehanna River are rich with forests, waterfalls and caverns and chock-full of history. They were home to Native Americans for thousands of years. Much later, they became part of the “Leatherstocking Region,” named for a series of novels published in the 1800s called The Leatherstocking Tales.

Otsego Lake is massive: an elongated body of water, almost 8 miles long and covering 4,046 acres. Formed 10,000 years ago when the tongue of a continental glacier a mile thick — crossing at least a third of the continent — scoured out the Susquehanna Valley from exposed limestone that would become the lake floor. (That limestone still helps to protect water quality in the lake because it neutralizes acid rain.) As the glacier retreated, ice melt filled the depression, creating the lake, the Susquehanna River and many of its tributaries.

The wooded shores of Otsego Lake are still sparsely developed. Some large waterfront mansions there, with expansive lawns and formal gardens, speak to the wealth of local families, some of whom can trace their lineage back to the 1700s.

Several local businesses rent kayaks and canoes and even power boats. Don’t be surprised if someone at a public launch site asks where the boat, whether rented or owned, has been last. It’s part of an attempt to stop the spread — or introduction — of invasive species to the lake. Water stewards sometimes staff the launch areas to inspect your boat and provide a mobile boat-wash station to rinse it off if necessary.

Perhaps the best way to explore the landscape around Lake Otsego is to visit Glimmerglass State Park, located on the northern shore. You can camp there year-round. Or, you can also rent a cabin in nearby Betty and Wilber Davis State Park or a book a room at a bed and breakfast or a Cooperstown hotel. The park is only 8 miles from Cooperstown, so if you prefer your fire indoors while you relax on a cushy couch, options for comfort are many.

The park has well-marked trails and a good amount of lake access for swimming, boating and fishing. The views of the lake from picnic areas and the roadside are alone worth the trip; Glimmerglass has been called New York’s most scenic state park by reviewers on various websites.

One of the most beautiful views of the lake is from the expansive front lawn of Hyde Hall, a 50-room mansion built in the 1800s. The entire 593-acre park was once part of the Hyde Hall estate, owned by Englishman George Clarke, who kept adding onto his country house for 17 years. The house and grounds are now a museum, and tours are offered from May 26 until Oct. 31.

On my way to Glimmerglass State Park, I found a stop at the Sunflower Café well worth my while. The restaurant is in a little house, painted with sunflowers outside and inside on tables, walls and in artwork on the walls. A blackboard outside proclaimed, “We’re not a fast food restaurant. Good food takes time.” Most of the food is super local, procured within a 15-mile radius of the restaurant.

The menu includes an elk burger, which had unfortunately sold out on the day I stopped by. But I enjoyed tomato soup and an extraordinary grilled cheese — made from myriad choices such as local cheddar, Gouda, fig jam, spinach, sun-dried tomatoes, and asparagus. The soup and my custom-made grilled cheese hit the spot, and I was ready for the trail.

Of the four short trails in the park, I chose the Sleeping Lion Trail. It was the only one with some elevation. The park brochure also said it was the best choice for seclusion, and I wanted to get into the woods that have remained the same since the Clarkes lived in Hyde Hall.

The loop trail climbs up and down the slope of Mount Wellington, which rises behind the mansion. The peak is on private land, so this trail only takes you half way. It’s called the Sleeping Lion Trail because some say the mountain, when viewed from a distance, resembles a lion lying down.

The hike is about 2.4 miles through a hemlock forest and rated as a moderately strenuous, which I found fairly accurate. The first quarter mile of the hike included a series of short climbs. The canopy of hemlock and white pines is thick enough in areas to partially block daylight. There was no undergrowth beneath these giant trees, just straight trunks reaching for the sky. And it was quiet. So quiet that a tiny chipmunk scurrying about in the dry leaves on the forest floor made me jump. Even the birds made little noise in the heavy, mature forest. Two white-tailed bucks bounded away when I approached.

The forest had both the look and feel of Natty Bumppo country. Because that’s what it is.

Natty (Nathaniel) Bumppo (portrayed by Daniel Day-Lewis in the 1992 movie, The Last of the Mohicans) is the fictional frontiersman in The Leatherstocking Tales, a woodsman and trapper raised by Indians, complete with leather stockings and fringed jacket. The author, James Fenimore Cooper, was the son of William Cooper, who owned the land where Cooperstown was founded in 1786. William was able to acquire great swathes of land around the lake and sell lakefront lots to farmers and aristocrats.

Many local spots are named after characters or events in his son’s books, as well as the family name. In the novels, Cooper renames Otsego Lake “Glimmerglass” because of its smooth surface. The name was given to the state park as well as the local Glimmerglass Opera company. You can also hike to “Natty Bumppo’s Cave” on the eastern shore of the lake, said to be one of Cooper’s favorite childhood hangouts and the inspiration for a cave Natty uses in one of the novels. To find it, drive along Route 31 and look for a historical marker and a very small pull-off. The trail isn’t long, but it is a rocky and challenging climb.

The Fenimore Art Museum is located on the former estate of one of Cooperstown’s influential philanthropists, Stephen Carlton Clark. Clark was an avid art collector and in 1944 donated one of the family’s lakeside homes and much of his art collection for the museum. The estate was called Fenimore House because the mansion was built on land where Cooper’s farmhouse once stood. The museum houses several permanent collections of U.S. art, including American Indian art and several paintings depicting scenes in The Leatherstocking Tales.

It was Clark’s grandfather, Edward, who established the family’s conservation ethic that continues today. In 1870, Edward had the foresight to start buying land around Otsego Lake to protect it from development. Today, Jane Forbes Clark — Edward’s great-great granddaughter — is president of the Clark Foundation, which supports the Otsego Land Trust, Otsego County Conservation Association and other organizations that preserve the landscape around the lake. The foundation, itself, owns approximately 3,000 acres of farmland, forests and lakeside property, which Jane Clark is committed to maintaining in its largely natural state.

The result, for the visitor, is an opportunity to explore a small, out-of-the-way town that offers a variety of attractions amid a landscape where you can marvel at the origins of a mighty river and imagine a glimpse of Natty Bumppo on its shores.