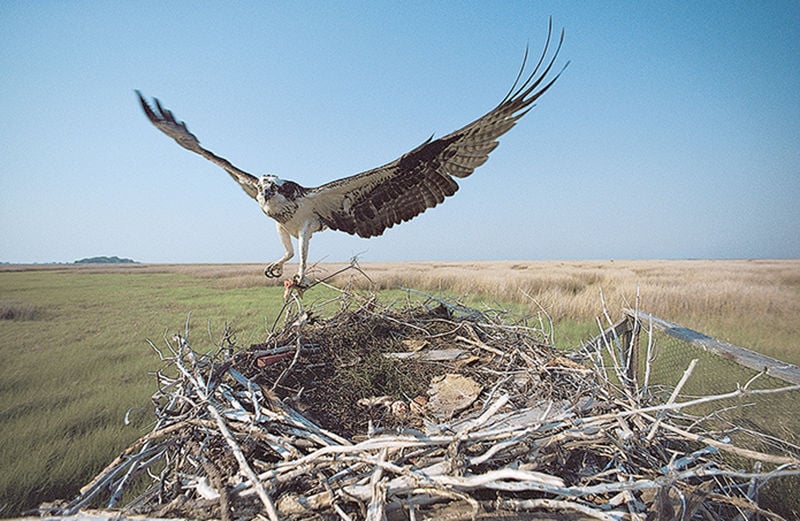 An osprey wings back to its nest on Smith Island with fish for its young. Osprey were once an endangered species in the Chesapeake region and elsewhere. (Dave Harp) 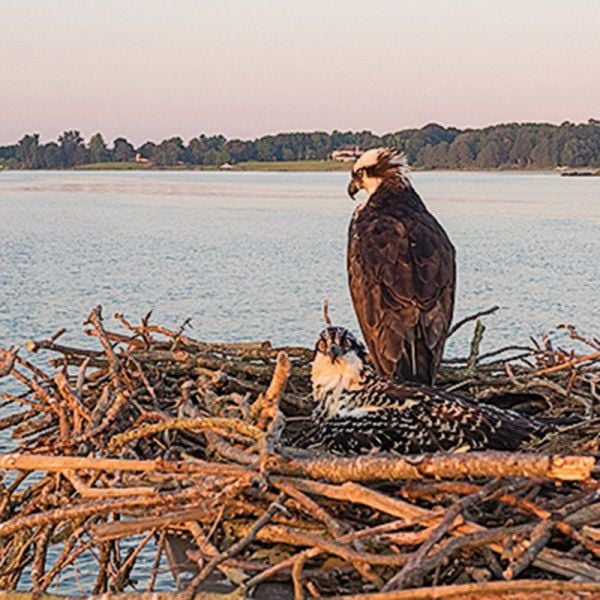 An osprey watches over a chick along the Choptank River in Maryland. (Dave Harp)

An osprey wings back to its nest on Smith Island with fish for its young. Osprey were once an endangered species in the Chesapeake region and elsewhere. (Dave Harp)

An osprey watches over a chick along the Choptank River in Maryland. (Dave Harp)

When Audrey returned to the shores of Kent Island last year with her new mate, Calico Tom, they once again enjoyed a devoted following as the subjects of an online reality show.

Their followers helped them become foster parents after efforts to raise their own young proved fruitless. As the new family melded, hundreds of people voted on names for their newest chicks, landing on Montana and Maine.

Tom and Audrey are among thousands of ospreys — brown-and-white “fish hawks” — that make their homes along the Chesapeake Bay and its tributaries from spring to late summer. A live webcam run by the Chesapeake Conservancy has followed the osprey nesting site since 2009 and had more than one million unique visitors in 2015.

The Chesapeake Bay boasts the world’s largest population of these fish-fetching raptors, which can be found on every continent except Antarctica. Their return is a sign of spring and their presence an ecological indicator that local waters can still support enough fish to feed them.

“For most people, they sort of represent the Bay,” said Bryan Watts, director of the Center for Conservation Biology of the College of William and Mary and the Virginia Commonwealth University. “They embody the Bay more than just about any other bird species I can think of.”

Traditionally found nesting along tidal portions of the Bay, the birds have been pushing farther upstream as their populations have grown. Those that nest along less saline stretches of water eat more shad and catfish than menhaden, deploying talons that are designed to snatch even the slipperiest specimen from the water.

The raptor can turn the fish in its talons to face forward to optimize the aerodynamics of a return flight.

“Everything about them is designed around fishing,” Watts said.

Ospreys grow up to 2 feet in length and their wingspan can reach 6 feet. They are occasionally confused with juvenile eagles, which, though brown in color, are much larger.

Ospreys and eagles share a similar recovery story. By the 1970s, the populations of both species were devastated by the pesticide DDT and both were endangered species.

After DDT was banned in 1972, their populations began to bounce back. In the Bay region, osprey numbers doubled from a low point of 1,450 pairs in the early ’70s to approximately 3,000 in the mid-’90s. Now, Watts estimates there are about 10,000 pairs of ospreys that wing their way around the Chesapeake each year.

That could be more than the species’ pre-Colonial numbers, he said, as they’ve adapted to increasingly urban areas and the easy nesting spots that come with them.

Ospreys build large nests with piles of branches and debris atop channel markers, utility poles or other lofty structures. People who live along the shore sometimes build nesting platforms with the hope of welcoming a new raptor pair to the neighborhood. Watching ospreys court, battle against competing mates or hatch from their eggs makes for good entertainment from a kitchen window — or from the other end of a live webcam.

Ospreys can be spotted in the Bay region from early March to late August, though a few have been known to forgo migration and stay in southern parts of the watershed year-round. Watts said visitors can spot as many as 60 birds in the air at once near some of the tidal areas around Baltimore, especially in July and August.

During those summer months, the one to four eggs that each pair laid in spring become fledglings ready to head south for their first migration, sometimes tripling the number of ospreys in the area.

Migration then leads the birds to locations across South America each year — Brazil, the Amazon, Venezuela — and they sometimes take circuitous routes to the same spot. Depending on which way the wind blows, the osprey is one of the few birds that will venture out over open East Coast waters during their southward commute.

Juvenile ospreys that survive their first migratory trip don’t return with their parents the following year.

“The next spring, they stay there an extra year,” said Rob Bierregaard, a research associate at the Academy of Natural Sciences at Drexel University in Philadelphia, who has been studying osprey migration patterns since 1971. “They’re the only bird of prey in North America that has this gap year.”

While ospreys generally mate for life, they take separate winter vacations — and will find a new mate quickly if theirs doesn’t return for spring mating fast enough, Bierregaard said.

Bierregaard, who’s tracked 95 birds during his tenure and kept tabs on seven Bay ospreys last winter, has more than 1,000 subscribers to his tracking e-mails who often tell stories about the birds they’ve followed.

An osprey named Nick that returns to Tangier Island each spring has been wearing one of Bierregaard’s backpack-like, one-ounce transmitters since 2013. In 2015, Nick got a late start returning home from Colombia and didn’t make it back until mid-April, traveling 2,700 miles in a dozen days, according to his transmitter. If only he could tell us what made him linger.

“It’s just fascinating to see where these birds go and to follow their adventures,” he said.

The Center for Conservation Biology runs a website where people can report and monitor osprey nests, recording when the migratory birds return, build new nests or need help: osprey-watch.org.

Rob Bierregaard tracked seven ospreys’ migrations from the Chesapeake Bay to South America this past season. People can log on to see the progress of their favorite birds as they begin to head back home in March and migrate south beginning in August: ospreytrax.com. Select Osprey>Individual Maps>Adults-Mid-Atlantic and then the osprey’s name.

The Earth Conservation Corps in Washington, DC, named its resident osprey Ron Harper after the father of a local baseball player and tracks his migrations: earthconservationcorps.org under “Raptor Conservation.”