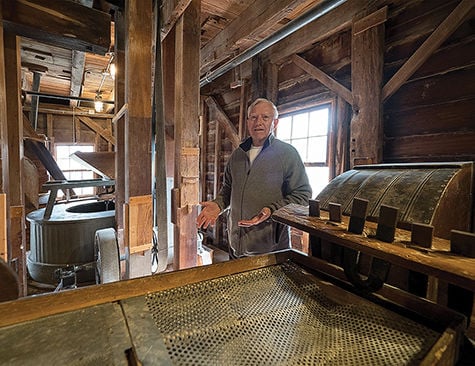 John Nizer, president of the Friends of Wye Mill, explains the automated system — given the third patent issued by the United States — that was installed in the mill during the late 1700s or early 1800s. 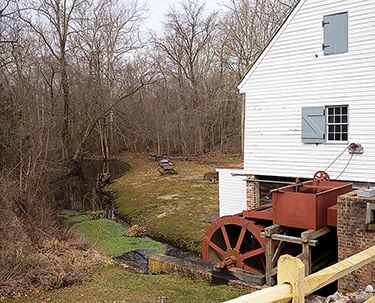 The Wye Grist Mill was built in 1682 near what is now the Wye East River in Maryland. Along with providing a place for local farmers to process their corn and other grains, the mill helped supply the Continental Army with flour during the Revolutionary War, when troops in northern states were struggling for food. 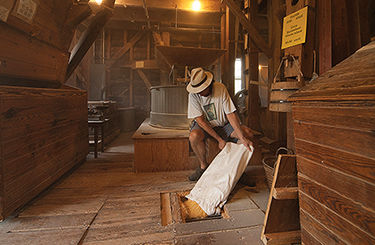 A volunteer at the Wye Grist Mill pours corn kernels into a hopper beneath the mill’s floor. The corn is transported to the griding stones by a waterwheel-driven system of driveshafts, gears and belts. 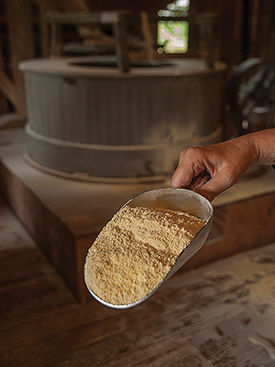 Today, volunteers operate the mill from May through mid-November and produce flour, cornmeal and grits for sale to the public. 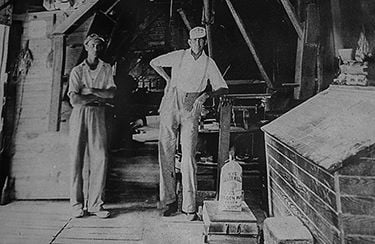 Winthrop H. Blakeslee (center) was the last private owner and miller of the Wye Grist Mill, which at one point was owned by an American colonel in the Revolutionary War.

It was 1682, the year that Delaware and Philadelphia were founded, and the year that French explorer Robert Cavelier de La Salle canoed into the lower Mississippi River basin, claimed the land for his king (Louis XIV), named it accordingly (Louisiana).

It was also the year that a new grist mill was built at the end of a 50-acre pond on what is now the upper Wye East River on Maryland’s Eastern Shore. And that is where I found myself on a mild, late winter day for a preseason tour of that very mill — a mere 337 years later.

Here’s the thing: The mill still works. On the first and third Saturday of the month, from May to mid-November, it grinds out whole wheat flour, buckwheat flour, rye flour, barley flour, cornmeal and grits — all of which are sold at the mill, $8 per 2-pound bag. The equally old and historic Robert Morris Inn in Oxford, MD, still buys grits from the mill, when available, and proudly advertises it on its menu. Granted, the mill only runs two days a month, but it works. It’s more than three centuries old and it still works.

And here’s the other thing: For the last two thirds of its life, the mill has been fully automated. Originally, the churning of the waterwheel only operated the millstones, which grind the grain. But in the late 1700s or early 1800s, the building essentially became a fully water-powered machine. The upgrade was courtesy of Oliver Evans, the Delaware inventor who developed and patented the water-powered “Automated Flour Mill” and likely supervised its installation at the Wye Grist Mill.

“Oliver Evans at the time was living up in the Tuckahoe area,” said John Nizer, president of the Friends of Wye Mill, as he led photographer Dave Harp and I around the three-story building. The mostly volunteer organization has owned and operated the mill since 1996.

“We don’t really know if he used this mill as one of his [test sites], but people speculate that he did,” Nizer said “He was selling the system himself, so it’s assumed that he came down to oversee the installation here. He invented it in the late 1780s, so we think [it was installed] somewhere between 1790, when he got the U.S. patent, and 1810 or 1820. That was patent number three, by the way.”

Yes, patent number three, as in only the third U.S. patent issued. Indeed, only three were issued in 1790, when the first U.S. patent law was enacted — the first for a system of manufacturing potash and the second for a candle-making process. Thomas Jefferson was in charge of patents that year, as a sort of side gig to his main job as Secretary of State. Jefferson reviewed and signed off on Evans’s patent, as did President George Washington and Attorney General Edmund Randolph.

The miller pours in the grain, he told us, pointing to wooden hatch on the main floor, and the machinery takes it from there, driven by the big red iron waterwheel on the south side of the building.

“Downstairs it gets picked up by an elevator, goes [to the top floor], where it goes through a fanning process, on rollers, to dry it out a little bit,” Nizer said. Then it drops down a chute into the hopper above the grinding stones, which feeds the grain into a sort of squared-off funnel, called a horse, which in turn feeds it into the axle hole in the center of the running stone.

From there, Nizer explained, the grain fans out between the stones, following geometrical grooves carved into the grinding surfaces of the massive wheel-shaped stones, each about 4 feet in diameter. The stationary bottom stone, or bed stone, weighs about 1,800 pounds, while the running stone on top is closer to 2,600 pounds. The miller controls how finely the grain is ground by a turning a wheel on the floor next to the grindstone housing, which minutely raises and lowers the running stone.

But wait, there’s still more to the process. The pulverized grain falls to the floor of the grindstone housing, where it is fed into another chute and returns to the lower floor. There, it’s picked up by another elevator (these are vertical conveyor belts, about 4 inches wide, fitted with copper scoops every foot or so) and taken once more to the top floor, where it’s sifted to remove the chaff.

In the case of wheat, the sifted flour finally goes down one last chute into a large bin, where it’s ready for bagging. The wheat chaff is kept by the miller to either grind again for a bit more flour or sell as animal feed.

For corn, there’s one more product to extract. The fine cornmeal goes into the meal bin just like the wheat flour, but the corn chaff is sifted again, coarsely, to produce grits.

Little is known about the very early history of the mill, except that it was built in 1682 by Edward Barrowcliff, on or near the site of a mill that had stood there since the late 1660s. Barrowcliff operated the mill for a decade or so before selling it to Richard Sweatham, who died in 1697, passing it on to his son, William. After a procession of owners and mostly hired millers through the 1770s, the mill was purchased late in that decade by Col. William Hemsley, head of the Queen Anne’s County Militia during the American Revolution and grandson of Philemon Hemsley, a prominent citizen and planter who had established a nearby estate that became known as Cloverfields.

Hemsley’s portrait hangs on the east wall on the lower floor, over an 8-foot-wide, glass-enclosed diorama of the mill and its surroundings. Perhaps even more important to the Revolution than his role as commander of the county’s militia, Hemsley is credited with supplying flour to feed the Continental Army in the critical later years of the war — as were many other mills on the Eastern Shore. Partly because of wheat crop diseases plaguing northern states in that period, the Eastern Shore became the “breadbasket of the Revolution” and continued as a major wheat producer well into the 1800s.

In the not-to-distant future, the Hemsley name will figure even more prominently in the story of the mill. In 2017, the Annapolis-based Cloverfields Foundation — founded by Stephen J. Hemsley, a descendent of the colonel and executive chairman of the UnitedHealth Group in Minnesota — began restoring Cloverfields, the family’s ancestral home across the Wye East River a mile or so from the mill. And late last year, the foundation purchased the even more closely related “miller’s house,” a 1740s fixer-upper perched on a small hill a few hundred feet south of the mill.

“We used to come up here and board this place up because kids used to come in here and have drinking parties,” Nizer said as we circled the now tightly sealed two-story brick house. “A lot of the [architectural detail] inside goes back to the original, so we got permission from the owner at the time to board it up and help cut down on the vandalism… Now the Cloverfields Foundation owns it, and they came in and cleaned things up and temporarily replaced some roof structures. They have it all closed up and sealed, with dehumidifiers and fans and everything. So somewhere along the line, when [Cloverfields] is done, this is their next project.”

The more immediate project, Nizer noted as we said our good-byes, is the annual April prep and cleanup necessary for this year’s opening on May 1. The mill may be fully automated thanks to Oliver Evans, he said, but getting ready for its annual coming out party takes good old-fashioned, hands-on work.

The Wye Grist Mill (900 Wye Mills Road in Wye Mills, MD) is open daily from May 1 to mid-November. Hours are 10 a.m. to 4 p.m. Monday through Saturday and 1–4 p.m. on Sundays. Grinding days are the first and third Saturday of every month. Flour, cornmeal and grits are available for purchase as long as supplies last. For information, call 410-827-3850 or visit oldwyemill.org.