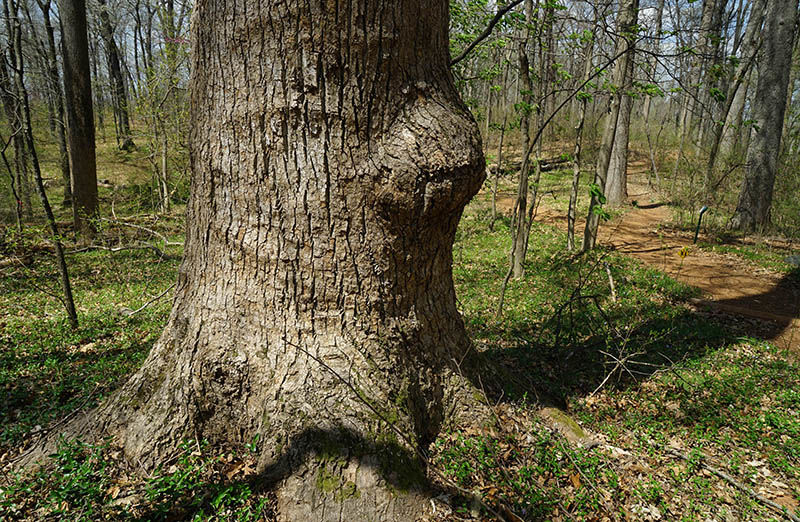 The Landmark Forest at President James Madison’s Montpelier estate is known for its sizable trees. Here, a knob near the base of a thick yellow poplar shows that the tree once grew on open land, where access to abundant sunlight allowed branches to sprout during early growth. (Margot Balboni?/?margotbalboni.com) 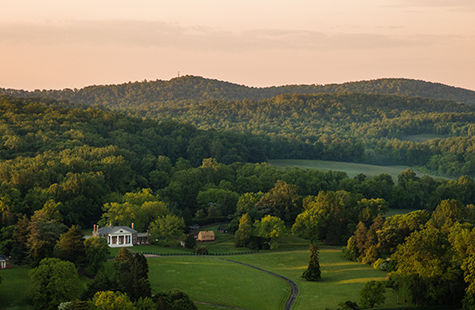 Two hundred acres of forest behind James Madison’s Montpelier has been designated a National Natural Landmark for the size and height of its trees. (Aaron Watson Photography) 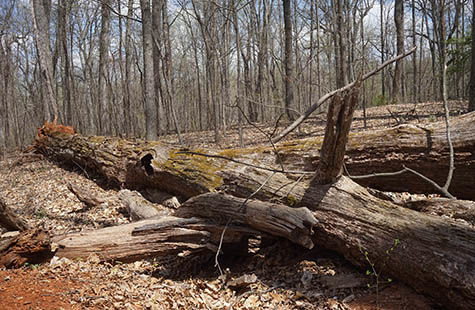 Scientists use the age of downed trees at Montpelier to understand the history of its forest. (Margot Balboni?/?margotbalboni.com) 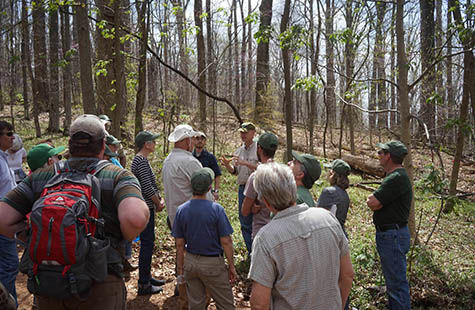 Horticulturist Sandy Mudrinich paused at the edge of the forest that rises behind Montpelier, the historic home of President James Madison, nestled in Orange, VA.

Before leading a group of visitors farther up the hill, Mudrinich invited them to look across the valley of pastures and forests spreading west for 30 miles to the Blue Ridge Mountains.

“This is pretty much what Madison would have seen back in the early 1800s when he brought his wife, Dolly, and young family to live here,” she said.

The group had come to view “the Big Woods,” the 200-acre forest at Montpelier that has been relatively undisturbed since Madison’s time. In 1987, the U.S. Department of the Interior dubbed it a National Natural Landmark based on the exceptional age and height of the trees.

Mudrinich has worked at Montpelier since 1985, almost the entire time that the property has been under the protection of the National Trust for Historic Preservation. When the Montpelier Foundation took over the estate in 2000, she stayed on — and is keen to share stories about the land and the forest.

As the group entered the forest and large trees became commonplace, heads swiveled up from the trail to the treetops. The scale is both unnerving and awesome.

The bright April sunlight streamed down through the bare branches of yellow poplars — also known as tulip poplars or tulip trees ­— some towering more than 100 feet above. The delicate flowers of spicebush brightened the understory.

The group followed the Mountain Mill Road trail, one of the main trails into the Landmark Forest, which follows the trace of an old road that in Madison’s time led to a mill on the other side of the mountain.

Halfway up, Mudrinich stopped and leaned against the trunk of a towering yellow poplar. For productivity in horticulture as well as farming, Mudrinich said, “It’s all about the soil.”

Montpelier is underlain by “Davidson Soil,” which extends north from Virginia into Maryland, West Virginia and Pennsylvania. Early settlers didn’t have a name for it, but they could tell the soil supported forests rich in diversity, a good sign that they could successfully convert those forests to farmland.

Some called Davidson Soil “God’s gift to the plants.” Other large presidential plantations nearby — Jefferson’s Monticello and James Munroe’s Ashlawn Highlands — thrived on the same soil.

In 1723, Ambrose Madison, a prosperous gentleman living in Tidewater Virginia, received a patent for 4,675 forested acres in what is now Orange County. An overseer and enslaved labor force were sent ahead to clear the land for tobacco. By the time his grandson, the future President James Madison, was growing up, Montpelier had become one of the largest plantations in the Virginia Piedmont.

All 2,650 acres of today’s Montpelier were part of the original Madison landholdings, including the Landmark Forest. Portions of today’s forestland were once used as pasture and even cultivated. Clues to these former uses remain, if you know where and how to look.

“This one here, it grew up in a pasture,” Mudrinich said, pointing to huge calluses in the lower trunk of a gnarly yellow poplar several yards off the trail. The calluses show where the tree was able to immediately grow its lower branches because it didn’t have to compete for sunlight.

Then she pointed to the tall, straight trunks of other yellow poplars, which foresters call “forest-grown.” The trunks of these trees are smooth and knot free, the branches not starting until 50 or 60 feet off the forest floor.

Some of the forest served as woodland pastures — forage for free-ranging cows and pigs. The practice was common in Madison’s day. Oak trees and hickories, a common understory tree then and now, were valued for the nuts that fattened pigs and other livestock. The pignut hickory derives its name from this practice.

Researchers who study Montpelier’s Landmark Forest hypothesize that some of the exposed roots on older trees may have resulted from free-ranging livestock, too, as they dug at the base of the trees. Pigs were especially damaging to trees because of their rooting habits.

The forest also displays many signs of logging in the last three centuries. Hikers will see numerous “stump-rooted trees,” where the current yellow poplar or oak grew from the remains of a tree timbered in the past.

Mudrinich pointed out stumps from American chestnuts, the disease-resistant sapwood encircling hollow cores where the heartwood had succumbed quickly to blight. All of the chestnut trees in the Landmark Forest were cut down when Montpelier’s last timber harvest took place in the 1930s.

Eight years after Madison died in 1836, Montpelier was sold and the land went through a succession of owners until 1901, when the duPont family purchased it. They added onto the house, formalizing acres of gardens in the style of the time by importing hundreds of plants that we now recognize as invasive species that compete with the native ecosystem.

Mudrinich pointed to a towering white oak with a broad dark shadow winding around its trunk, the mark left by a massive wisteria vine that the Montpelier Foundation had to remove. “The duPonts probably got tired of it on the front porch, cut it down and tossed it into the forest,” she said.

The foundation, supported by master naturalists, has been working for the last decade to rid the forest of these invasives. Until recently, five-leaf akebia once covered 10 acres of the forest floor. Each April and May, a call goes out to master naturalists to help pull garlic mustard.

Deeper in the woods, Mudrinich pointed out the “tip ups,” places where a tree fell, pulling roots and soil up into a mound with an accompanying pit. The roots of other trees are spread open and bare on the soil, a sign of soil erosion from past centuries. Elsewhere, the topography reveals telltale undulations that mark deep soil erosion from the small tributaries branching up the hillside.

Mudrinich led her group back downhill, the trail winding through patches of rhododendrons along a small stream. Flowering bloodroot was making its way up through the leaf litter. Here and there, the white and lilac flowers of the cut-leaf toothwort hung daintily on green stems. The broad leaves of mayapple were just starting to unfurl.

The trail forked with a rugged log bridge leading up another hill towards the Demonstration Forest. The foundation uses this section of the woods to show landowners the best practices for managing forests for wildlife, recreation and timber.

Within the Demonstration Forest is a small warm-season grass meadow that has been managed by fire and pruning to encourage wildlife. At another spot in the middle of a patch of tall trees is a 20-by-20 foot deer exclosure, fencing used to keep deer away from the trees and plants within. Adam Downing, a forester for the Virginia Cooperative Extension who often helps lead landowner educational tours, said the exclosure demonstrates the impact of too many deer in a forest. “It’s full of native plants,” he said, “which the deer would love to get to.”

Other parts of the Demonstration Forest showcase techniques such as selective thinning, crop tree release and oak regeneration.

The definition of old growth forest is fluid these days because, Mudrinich said, “There’s so little of it left.” Some scientists consider the Landmark Forest the best example of a mature forest of yellow poplar and spicebush in all of the Eastern Piedmont.

Tom Dierauf, a retired research forester who led a team of specialists in a comprehensive inventory and assessment of the forest in 2009, wrote that it is “remarkable for its very large yellow poplars and oaks, and not quite so large but still impressive hickories and ash.” The report said that trees of such size are “unusual” in the Virginia Piedmont.

The forests and trails are reason enough for visiting Montpelier, but a visit to the house itself to get acquainted with Mr. Madison helps visitors to understand what the foundation calls a “constitutional landscape.”

Madison, a major author of the U.S. Constitution and the Bill of Rights, also thought deeply and wrote prolifically about the business of agriculture, sustenance and growing populations. As he watched his country grow in the early 1800s, he recognized the need to balance competing needs of human prosperity and the health of the land.

Some point to Madison as one of the earliest U.S. conservationists. In his 1818 address to the Agricultural Society of Albemarle, VA, he warned that humans “can scarcely be warranted in supposing that all the productive powers of [the Earth’s] surface can be made subservient to the use of man.”

At the same time, Madison worked to make his land as productive as it could be. And, like other landed gentry of the colonial era, he would have never been able to farm and forest his vast estate without a sizable labor force — which, over the course of his lifetime, consisted of 300 enslaved people who lived at Montpelier.

From the edge of the forest, looking at the distant Blue Ridge Mountains as Madison would have done, visitors can imagine his dreams for his land and the nation — and consider the limitations of his vision.

Today, the Landmark Forest is a special place for its remarkably mature and tall trees, but it’s also a place to ponder the ways in which we have historically used forests, as well as the possibility for making other choices now and in the future.

Montpelier, its Landmark Forest and more than 8 miles of trails through the forests and fields are free and open to the public every day of the year. Fees apply for guided tours of the house, gardens, archeological works and woods. The newest exhibit in the house, The Mere Distinction of Colour, explores the history of slavery at Montpelier in the context of the region and the United States. For information, visit Montpelier.org.

Leslie Middleton is a freelance writer based in Virginia.