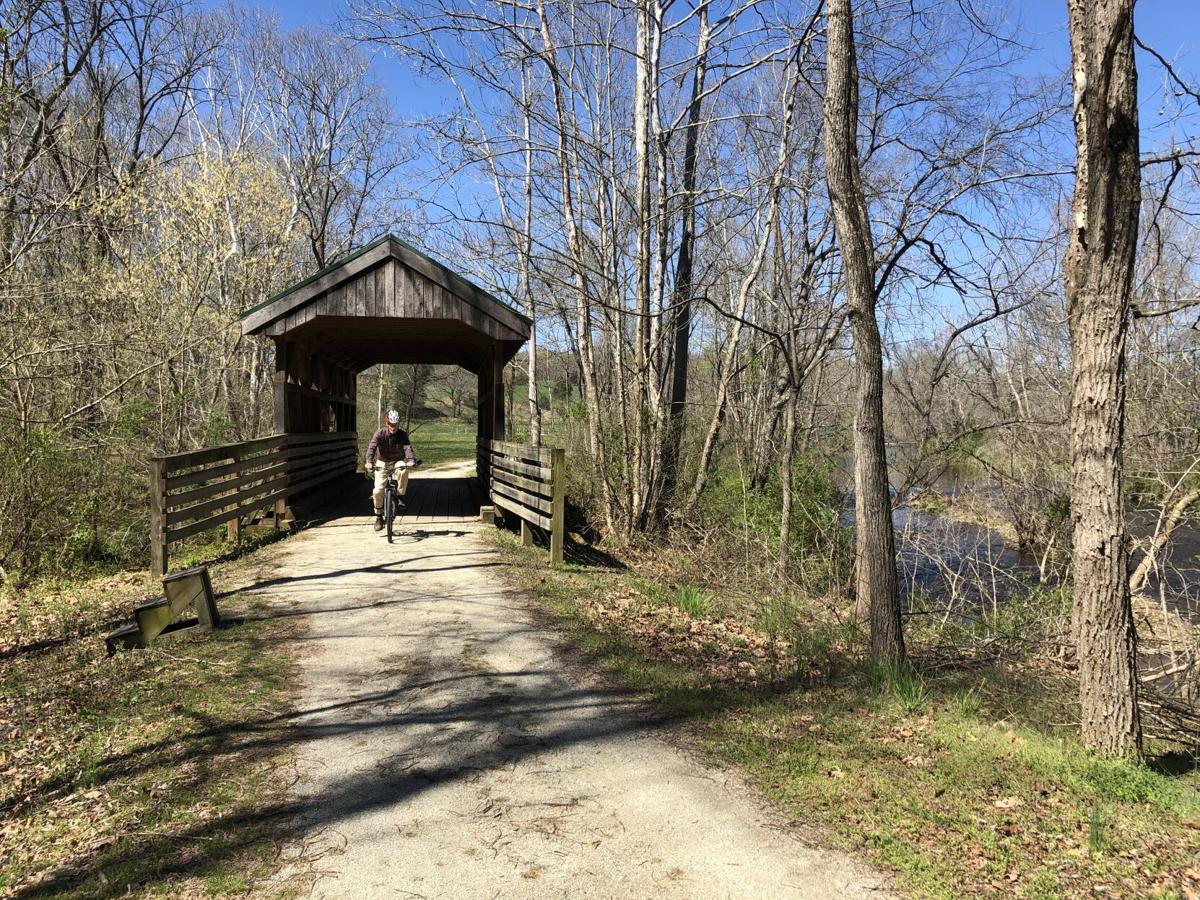 A cyclist passes over one of several bridges on the Virginia Blue Ridge Railway Trail. 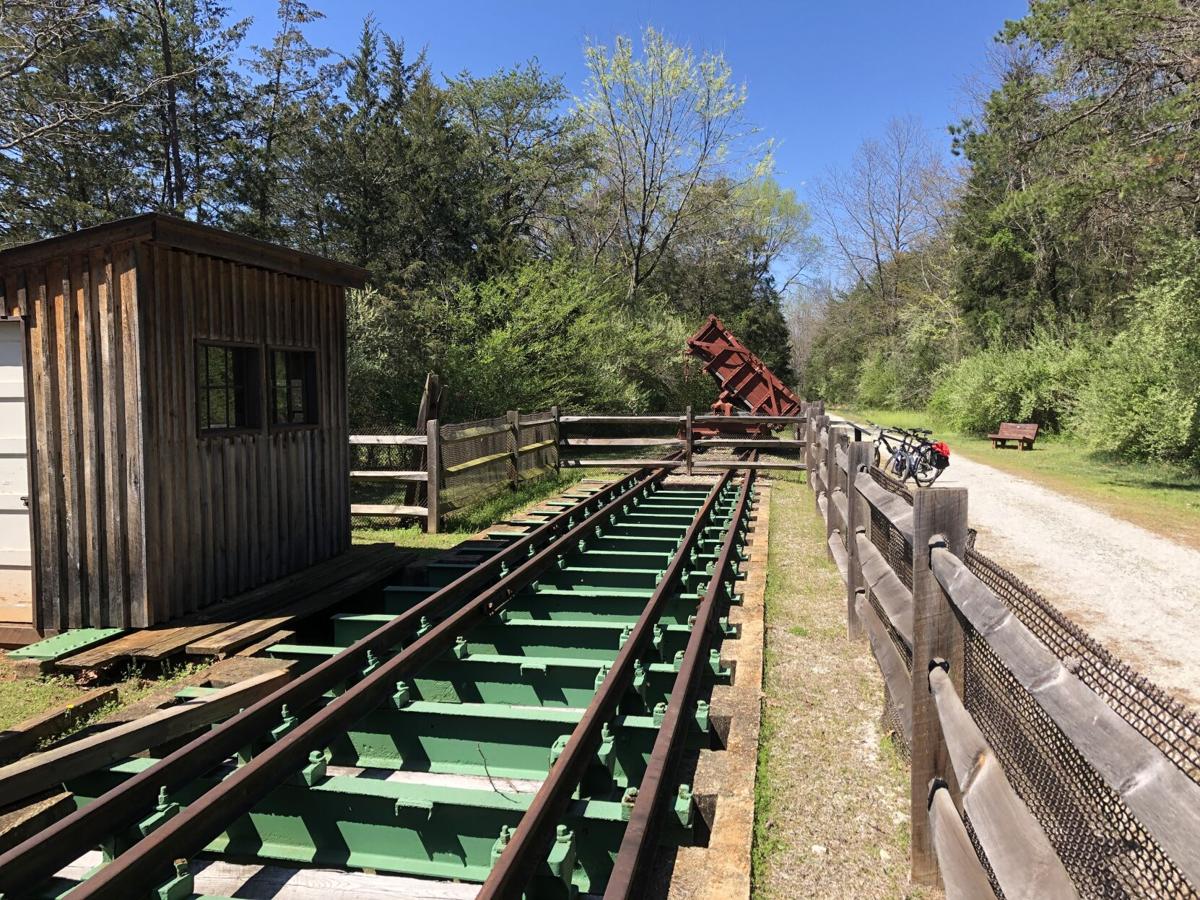 At the end of the Virginia Blue Ridge Railway Trail, volunteers have reconstructed a scale, designed in the 1850s, that could weigh rail cars individually without decoupling them from the train line. 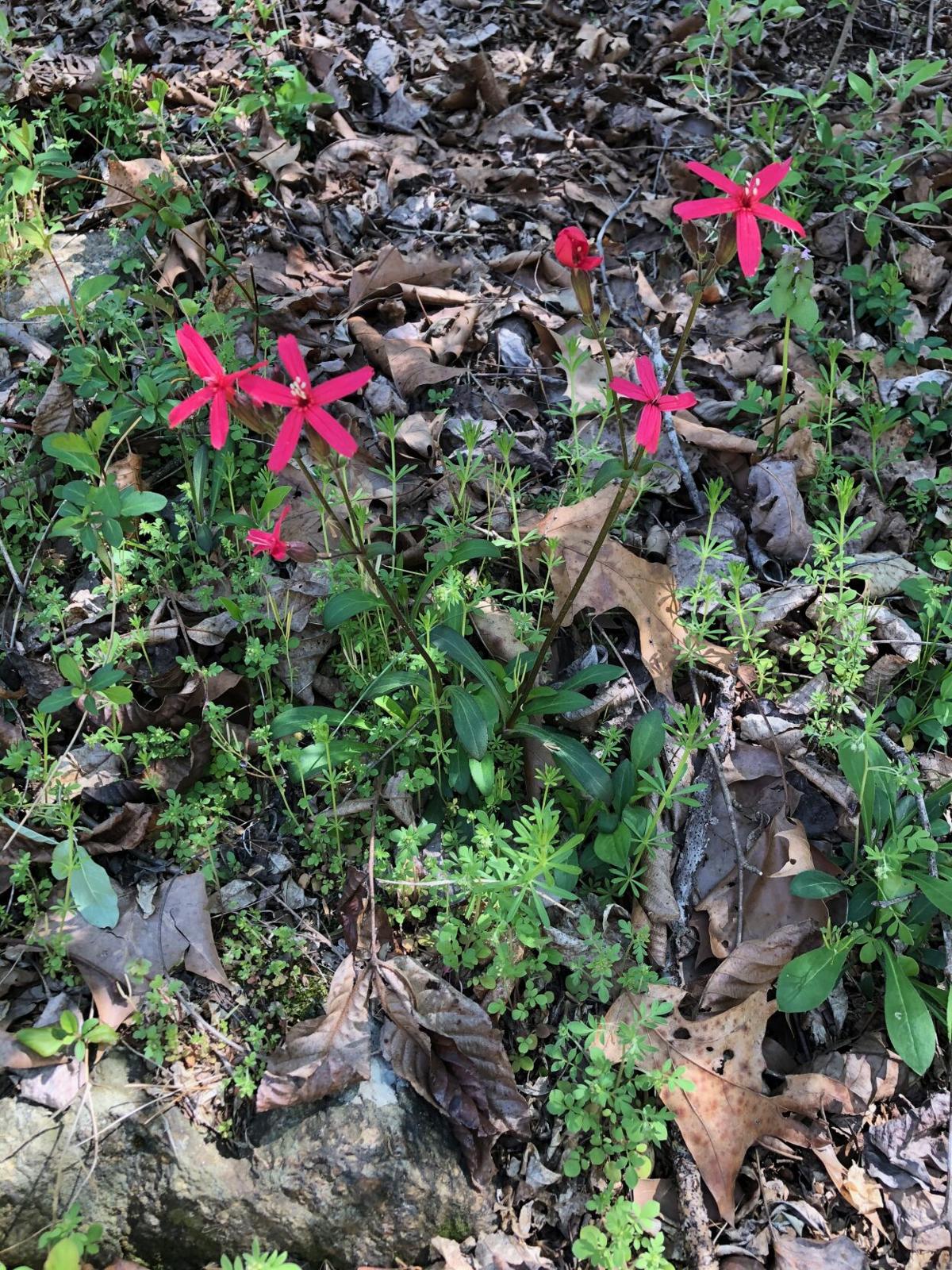 Fire pinks push through the bank along the Virginia Blue Ridge Railway Trail.

As American chestnut trees were dying, the Virginia Blue Ridge Railway sprang to life. It was 1914, and blight was decimating chestnut trees in hardwood forests from Maine to Florida. Nevertheless, a pair of undeterred entrepreneurs established a shortline railway to transport chestnut timber from a series of mills that lay in the shadow of Virginia’s Blue Ridge Mountains.

It was a race against time, requiring more than a little luck to stay afloat, as the blight turned healthy hillside trees into rotting carcasses.

Three years later, war hampered their efforts, too. In 1917, at the onset of World War I, the federal government deemed these local timber operations nonessential to the wartime effort. Still, the railway hung on through a decades-long struggle to capitalize on changing markets.

For a time, farm orchards provided apples that the railway carried to market. Later, rocks and minerals were extracted along the Piney River for use in manufacturing, and the railway served related industries as well. But by 1980, all local commercial ventures had shut down, and the railroad no longer had customers.

A few years later, local residents concocted a vision for what would become the Blue Ridge Railway Trail — for walking, bicycling and horse riding. It began when Steve Martin, who owned a farm along the railway bed, purchased 7 miles of former railroad land between the historic sites of the Piney and Tye rivers settlements, which are home to just a few shops and houses today.

Conversations with forward-thinking neighbors led to the creation of a foundation that secured grants to build the trail, section by section, bridge by bridge, over approximately 15 years.

“There were a lot of folks in the community — including adjacent landowners — who felt nostalgia for the old railroad,” Martin said. Building the railway trail was a way, they thought, to continue the railroad’s legacy.

As each section was completed, the Martin family deeded the land over to Nelson and Amherst counties, through which the trail runs. The counties now own the land and work cooperatively to maintain the trail.

“It was a nice thing to do for the community,” Martin said.

The railbed is fully transformed into a 7-mile recreational trail. It follows the Piney and Tye rivers, tributaries of the James, while weaving eastward through forest, open pastures and brushy woodlands.

I set out on a bright morning this spring to bicycle the entire route, starting from the Piney River Trailhead at Virginia Route 151. There you’ll find good signage, a trail map and portable toilets.

Rows of tall Virginia pines at the beginning of the trail drew my gaze upward. With a slight wind at my back, I quickly pedaled through a short section of trail flanked by a robust chain-link fence and was soon greeted by the Piney River emerging from a crooked turn. I’d be cycling along the river for the next 4.5 miles until it merges with the Tye River, then follow the Tye to the trail’s end.

At the first of many picnic tables and benches along the way, I stopped to admire the clear water tumbling over and around small boulders in the river. The Piney is narrow and shallow, like a mountain stream, and I could easily imagine coming back in the summer to enjoy its refreshingly cool flow.

The trail is rich with birdlife and included on the Virginia Birding and Wildlife Trail. On the opposite bank, I spotted snatches of color from two year-round avian residents, cardinals and

blue jays. Behind me, the raucous call of the red-bellied woodpecker echoed from the edge a greening pasture rising just beyond the trail.

In a few weeks, the woods would be alive with yellow-rumped warblers, ruby-crowned kinglets and yellow-bellied sapsuckers. Later still, neotropical migrants would be drawing wildlife enthusiasts with binoculars.

Soon after crossing the Piney River on the first of five sturdy wooden bridges along the trail, I arrived at the Rose Mill trailhead, only 1.8 miles east from where I started. Here, too, are good signage and portable toilets. Having two trailheads with parking offers multiple trip alternatives. The terminus, 5 miles down the trail from Rose Mill, is a dead end and turnaround point, with no parking area.

Rose Mill was a once a thriving settlement, anchored by a grist mill, and named for the Rev. Robert Rose, a minister in the early 1700s. Rose was a protege of Virginia’s lieutenant governor, Alexander Spotswood. He frequently traveled between the Northern Neck of Virginia and the Blue Ridge foothills, serving communities along the way.

The mill at this river crossing has long since disappeared. But if you want a close-hand look at the milling process and fresh-ground grain products, you can visit the original 1794 Woodson’s Mill in Lowesville, a few miles off the trail by car or bike.

Close to trail Mile 5, the path crosses Naked Creek. I bicycled through the sturdy wooden, covered bridge in the midst of lowlands alight with Virginia bluebells and spring beauties.

Further along, just downstream from the confluence of the Piney and Tye rivers, I stopped to admire the view from another bridge where the trail crosses the Tye. The trail follows the Tye for the last 2 miles, at times hugging a steep bank. On my visit, the bank was draped in spring ephemerals like fire pink and trout lilies, emerging from winter’s duff at eye level.

At the terminus of the trail, volunteers have reconstructed a shanty and a scale, designed in the 1850s, to facilitate weighing rail cars individually without decoupling them from the train line.

Resting there in the shade on a bench built by a local Eagle Scout, I watched a train across the Tye River rounding the bend toward the James River and beyond. For a moment, I wasn’t sure what century I was in.

Through the woods are a few houses, the last echo of the Tye River settlement and the terminus of the Virginia Blue Ridge Railway and, until 50 years ago, a busy farm community hub. When Hurricane Camille came inland in 1969, it infamously stalled on the foothills east of the Blue Ridge, dumping a record 27 inches of rain in a three-hour period on Nelson County. Flash floods and mudslides killed 153 people and washed out 133 bridges (including several on the Blue Ridge Railway) and entire communities before causing massive flooding downstream all of the way to Richmond. Hillsides, homesteads and families still bear the scars from the devastating storm.

Returning back the way I came, I could feel the small but steady uphill grade in my thighs and lungs. From time to time, I stopped at one of the strategically placed benches for a drink of water and a view of the river. I could feel the stress of COVID-time falling away with every uphill mile. Trail founder Martin recalled encountering a man walking the trail one day. “He told me that the trail had saved his life. His doctor had given him maybe two years to live, so he started walking regularly on the trail — and now he was going on three years and feeling just fine.”

The health of the Piney River has also been in trouble. Waste discharges from riverside industries caused a series of fish kills from 1977 to 1981. One troublesome source became a Superfund site. The site’s current owner has removed sediment and treated groundwater through constructed wetlands and other processes to ensure that toxic chemicals do not pose a hazard to the Piney River or nearby household wells.

At the Piney River trailhead where I’d started, the information sign notes that the discolored water in the drainage ditches along the first half-mile of trail are from historic mining activities and that the slightly acidic water should be avoided by people and pets.

Myles Bartos, federal onsite coordinator for the U.S. Environmental Protection Agency, explained that recent monitoring and inspections revealed a small amount of potentially hazardous material in one of the mounded remediation areas. For a few months, starting in August, portions of that half-mile stretch and the parking lot may be temporarily closed for materials removal and site restoration.

I marveled at how this trail co-exists with an active Superfund site. Even now, as monitoring and cleanup continues, the Piney River downstream is clean enough to be considered for future trout stocking.

On the morning of my visit, the Piney River trailhead parking lot was full of cars with bike racks. A truck with a horse trailer was tucked into a corner.

Maureen Kelley, Nelson County’s director of economic development and tourism, summed up her appreciation for the trail nicely: “We love the trail because it’s flat, it meanders along the river and it has something to offer everyone, from outdoor and fitness enthusiasts to railway buffs.”

I’m probably a little bit of each of these and know that I’m not alone in my fondness for the Blue Ridge Railway Trail.