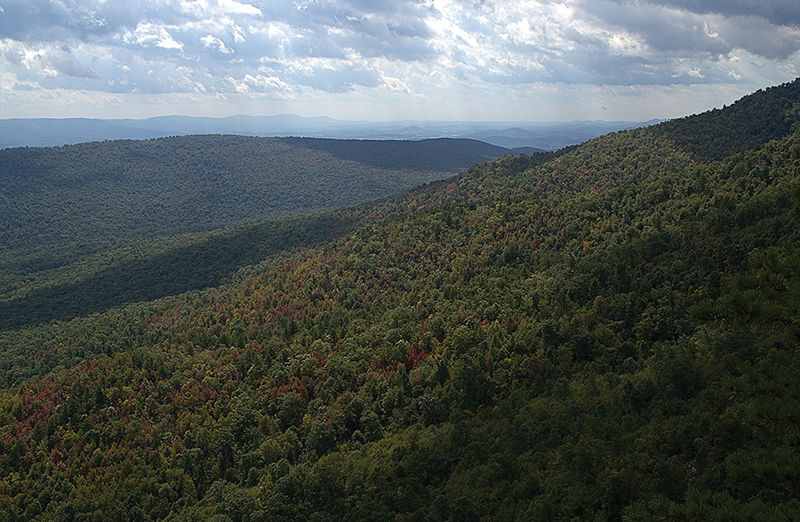 A hike along the Shenandoah Mountain Trail in the George Washington National Forest reveals the forested Deerfield Valley and the Blue Ridge Mountain Range rising up in the distance. (Aneta Kaluzna) 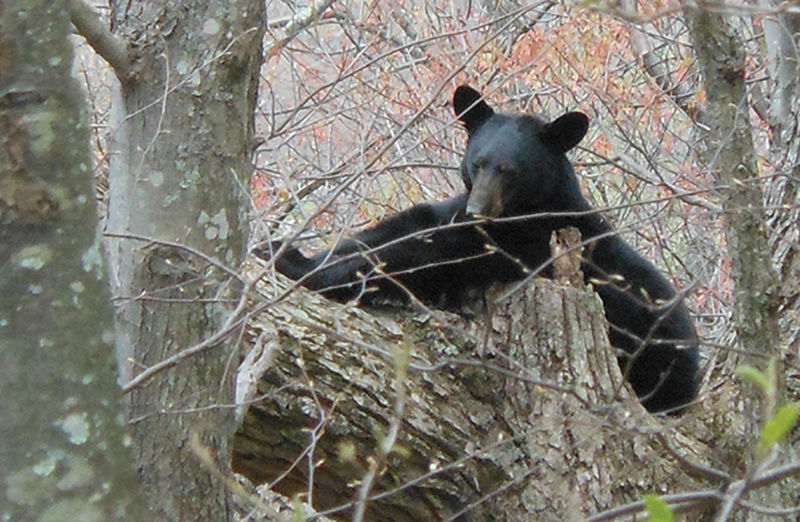 Sightings of black bears, like this tree climber, are on the rise in the George Washington and Jefferson National Forests. (USDA Forest Service) 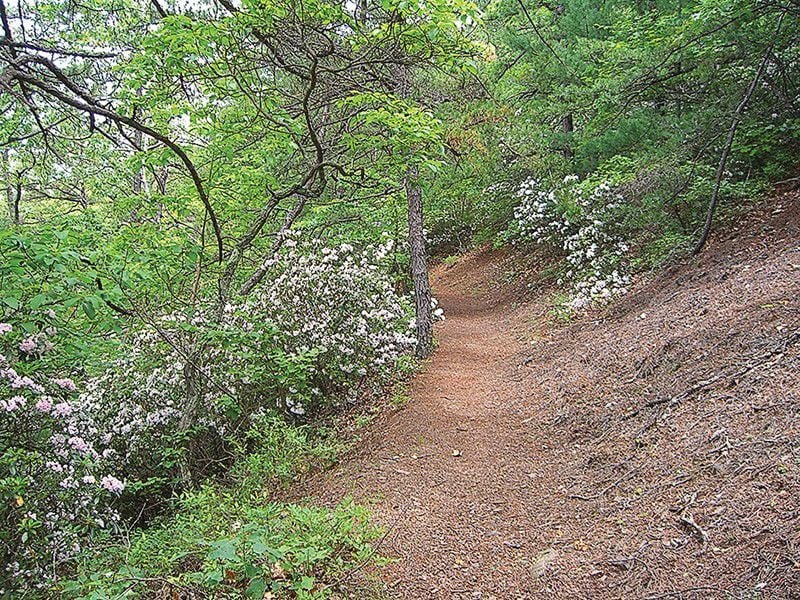 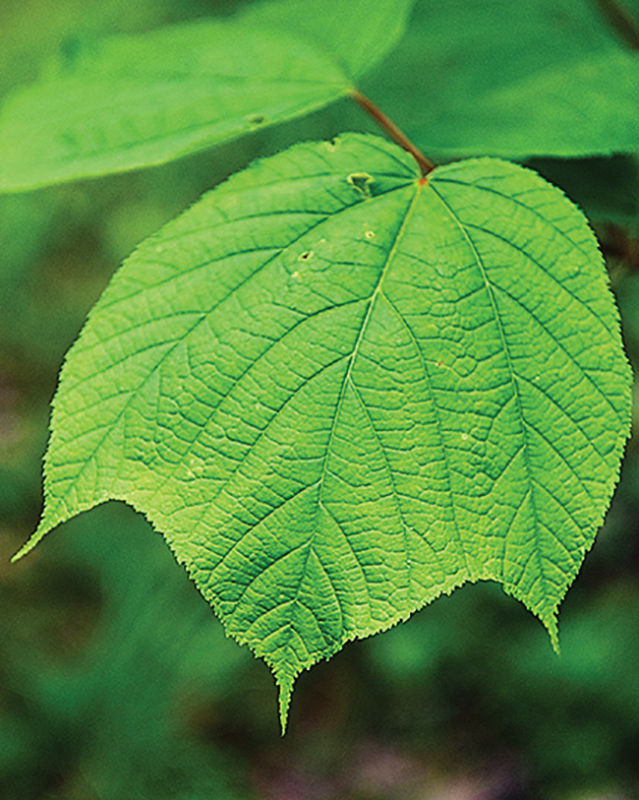 The striped maple, typically a Northern species, can be found on the higher elevations of Virginia’s Shenandoah Mountain Trail. (Plant Image Library)

High on the ridge of Virginia’s Shenandoah Mountain, I hunkered down to examine some toadstools when my eyes caught a series of regular hatch marks etched into the tree trunk just above me — the kind of marks made by large, chiseled claws, leaving rags of torn bark hanging down at about chest level.

I called back my hiking buddies, who were tramping on down the trail ahead, and we shared a hushed diagnosis: A large, male black bear had sharpened his claws and marked his territory here. It happened recently, judging from the tattered abrasions that were still bleeding sap. We had reason to believe that the bear was still nearby; on the way up the mountain we’d seen the expansive avenues plowed through roadside blackberry thickets by one or more of those heavy, hungry omnivores.

We were hiking a portion of the Shenandoah Mountain Trail, which stretches for more than 34 miles across the spine of the mountain in the George Washington National Forest — a narrow, tree-shadowed footpath considered to be one of the premier long-distance ridgetop trails in Virginia.

We had a limited time to spend on the trail, so we planned to travel only a few miles along a mostly level stretch known as Tizzle Flats. Don Cole, a friend with an exceptional knowledge of Shenandoah Valley hiking destinations, offered to lead the way. Joined by my old college buddy, Brian Vandegrift, who was visiting that weekend, we gobbled a greasy and excellent breakfast in downtown Staunton, climbed in Don’s truck and hit the road.

We drove west for about an hour and a half into Deerfield Valley, a rural area of privately owned farmland nestled between the wooded mountains of the national forest. The Calfpasture River, full and flowing, was on our left as we drove farther down the valley. The air

was so clear that we could see every tree and boulder on the shoulders of Shenandoah Mountain, looming up on the right.

On State Route 269 in Deerfield Valley, a U.S. Forest Service sign marks the turn to Tizzle Flats onto Forest Road 173. The sign also explains that the dirt road travels through private land. The owner has agreed to a “public easement,” a free right of way for anyone to access the national forest. Easements like this are outstanding examples of generosity and must be honored at all times by staying on the designated road and off private land. We drove slowly down the rutted lane through the landowner’s pasture, admiring his sleek Angus cattle.

We lurched through a few deep potholes and abruptly stopped at a gate: closed, chained and seemingly locked. Don assured me that access was permitted. Sure enough, the chain was only wrapped around the fencepost. We opened the gate, closed it behind us and continued our drive into the sun-dappled forest.

Bluebirds flickered over a small pond to our left, snagging insects. As the truck splashed through the thin trickle of Holloway Draft and entered the forest, eight rust-colored deer — two does, four spotted fawns and two yearlings — bounced away into the hardwoods. Trees soon obscured the dazzling cerulean sky, but we were rewarded with a diversity of trees and the rich, clean smell of living loam.

We slowly ascended the mountain’s flank, zigzagging our way through switchbacks and narrow turns, over culverts and dripping seeps in the limestone cliffs, to the distant ridge.

At last, we reached the trailhead at an elevation of 2,985 feet and parked the truck in a narrow open space among the trees. We stretched, laced up our boots and loaded up on the essentials — binoculars, water, guidebooks, beef jerky and roasted sunflower seeds. We were going to walk along the narrow ridgetop as far as we pleased, then reverse course and enjoy the route from another perspective.

According to a weather-beaten wooden Forest Service sign by the road, we were straddling the Augusta/Highland County line. The views were exceptional as we eased down the trail on a shady path of grass and moss.

Along the trail were fairly young stands of red and white oak, white pine and locust, and the striped maple, a tree I’d not seen since moving to this mountainous valley from New England some time ago. The striped maple has subtle streaks of green bark running vertically down its trunk, with broad, three-lobed leaves that end in tapering tassels. Typically a Northern species, it survives in Virginia only at higher elevations.

Indeed, all of the Appalachian mountain chain serves as a microclimate, a kind of elevated “island” for species of plants and animals that were effectively stranded here at the end of the last ice age, when the glaciers withdrew northward.

We strolled the comfortable, mostly flat trail for a few hours, enjoying the cool temperatures as a respite from summer’s hottest days. My friend Brian, who had driven up from the stifling heat of southern Louisiana, spent most of the hike in a gladsome daze, grinning, inhaling deeply and sweating very little.

At about the midpoint of our hike, we found the “bear tree.” Bears, like other large animals, use the same trails we do — all creatures follow the path of least resistance — and the scratched oak was conveniently placed for a male bear to display his territorial imperative.

Black bears, somewhat unlike their grizzly cousins, are highly reticent around people. Even 500-pound adult males prefer to flee into deeper woods when stumbling across humans. Nonetheless, we were struck by the strength needed to rip gouges down to the heartwood of this thick white oak, and we continued the hike with sharper eyes and ears.

The toadstools that had attracted my attention near the bear’s marks were widespread. In fact, the heavy rains of spring and summer had triggered an eruption of fungi all along the trail. We noted squat, gnomish mushrooms with red caps, strange clumps of pale finger-like projections, and tough shelf fungi jutting from dead snags. Puffballs were abundant. I gave one a squeeze and watch the brown cloud of spores jet into the air.

We decided to rest for a few minutes on the spongy beds of trailside moss, enjoying a constant southwest breeze. We broke out the jerky and passed around a canteen, listening to the distant croak of a northern raven.

Oak, hickory, maple and pine swayed rhythmically in the wind that crossed the ridge and kept the gnats at bay. Witch hazel was erupting crazily from the leaf litter, and a great red oak towered over us. In a few minutes, Brian had dozed off.

Later, as we hiked back to the truck, we passed a stand of mountain ash with a series of concentric holes notched evenly across the bark. The holes marked past visits of a yellow-bellied sapsucker, a woodpecker that feeds on insects trapped in the tree’s sap.

Tramping by these tattooed trees, Don pointed to the Blue Ridge Mountain Range rising up to the east, beyond Deerfield Valley and the Great North Mountain. He said he couldn’t recall any other visit when the air had been clear enough to see such a distance. In late summer especially, humidity and high barometric pressure trap particulate matter from nearby roads and power plants and often produce a murky haze.

The expansive views of valleys and ridges, the cool breeze and quiet passage of our boots on soft pine needles for mile after mile lingered on long after the hike was over. I can still feel the cool wind off the west slope of Shenandoah Mountain and see the startling slashes in that bear-torn oak trunk.

While no experience in nature is exactly the same twice, change happens more slowly here, so I expect to find it much the same when I visit again. Tizzle Flats, I’ll be back.

At 1.8 million acres, the George Washington National Forest and the southerly adjacent Jefferson National Forest form one of the largest intact wooded areas in the East, home to eight designated wilderness areas, 2,000 miles of hiking trails and approximately 230,000 acres of old-growth forest. Hiking, hunting and fishing are permitted in most places.

The Shenandoah Mountain Trail is in the George Washington National Forest. With strenuous changes in elevation, peaking at 5,396 feet, the trail passes highlights such as Ramsey’s Draft Wilderness Area and the Confederate Breastworks, a series of trenches left from the 1862 Battle of McDowell. The views are magnificent, and Benson Run, a small stream running through the area, is known for native brook trout.

The easiest way to reach the Shenandoah Mountain Trail is from the Confederate Breastworks Interpretive Site off US Route 250 on the Augusta/Highland County line, 25 miles west of Staunton. To access Tizzle Flats, turn left from 250 onto State Route 629 (Deerfield Valley Road) at West Augusta, then go southwest about six miles and turn right onto Forest Road 173.

For information about the George Washington and Jefferson National Forests, visit www.fs.usda.gov/gwj. Click on “Recreation” for tips about safe camping in bear country.