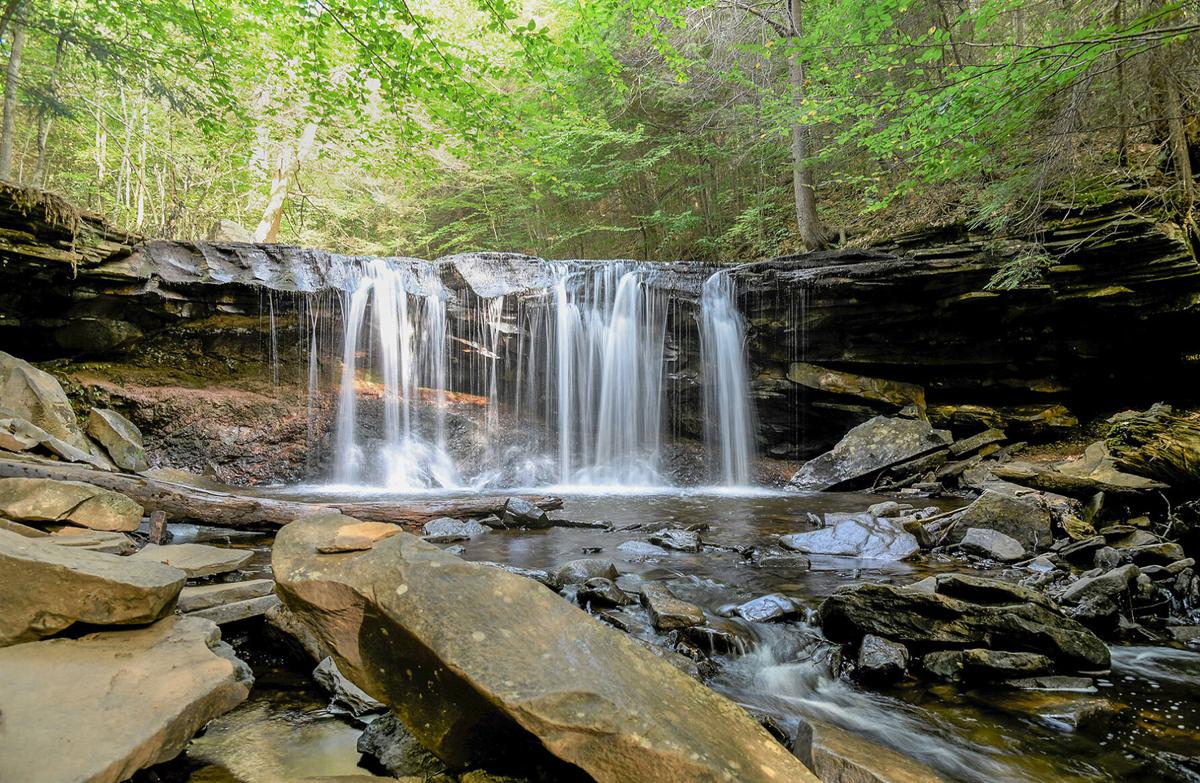 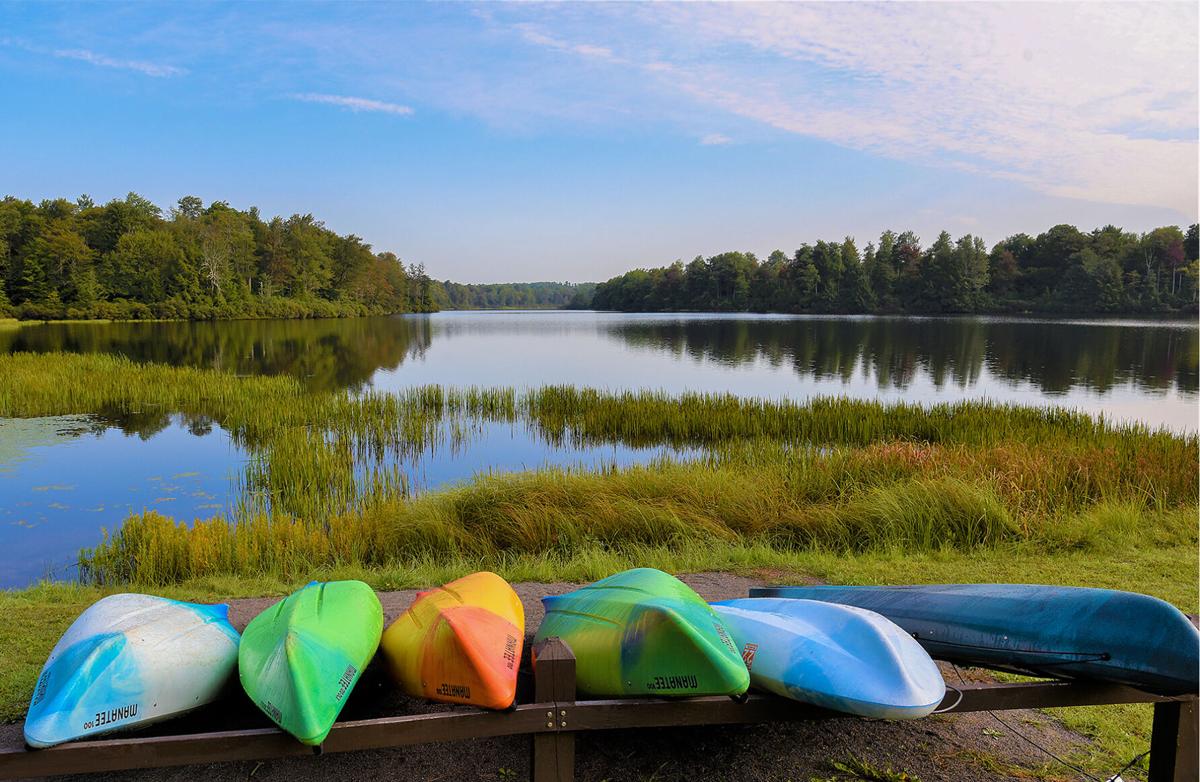 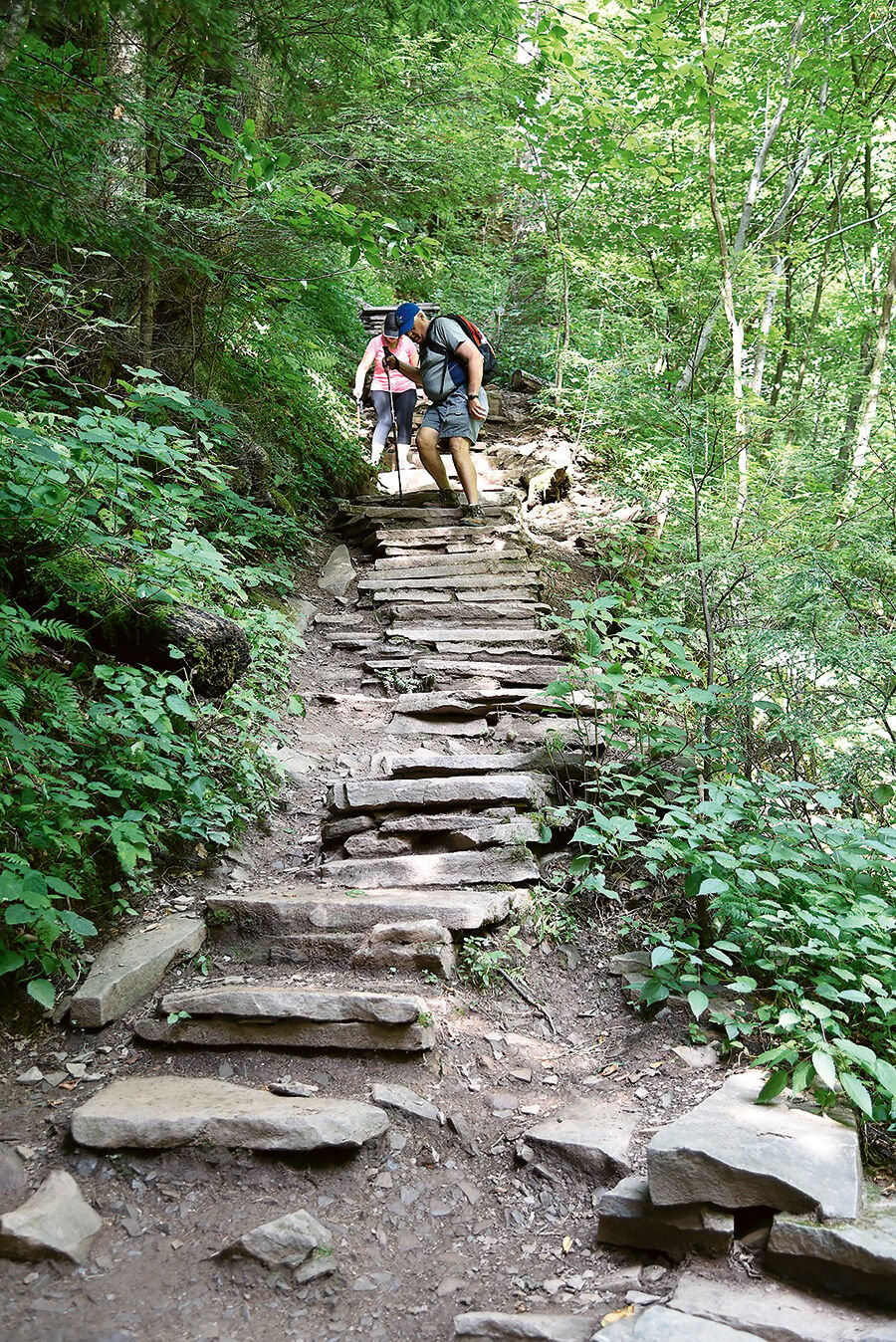 Much of the trail along the waterfalls in Ricketts Glen State Park is on uneven and often slippery rock staircases. Appropriate footwear is a must. 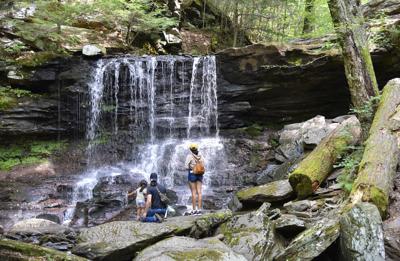 From the top of the mountain, starting out on Falls Trail in Ricketts Glen State Park in northeastern Pennsylvania, an unnamed stream sidles up to the path, just a wisp of water bathed in filtered sunlight. The sounds of late-summer insects and bird calls drown out even the faint tinkling of the water.

The first murmur of running water soon comes faint through the dense forest, about a half-mile down the trail. Then, rounding a bend, the mild-mannered stream throws itself off a ledge, plunging 37 feet into Mohawk Falls.

Far from being tamed by this abrupt fall, the stream goes wild, dashing into nine other falls in less than a mile though Ganoga Glen. That’s 350 feet of waterfalls. A parallel ravine, Glen Leigh, has another eight named waterfalls, and there are three more after the two streams hook up and flow through Ricketts Glen.

The 21 waterfalls, ranging in height from 11 to 94 feet, are the largest concentration of significant cataracts in the eastern United States and many consider the Falls Trail network, which can range from 3.2 to 7.2 miles in loops, the most scenic hike in Pennsylvania.

The waterfalls are located in the 13,000-acre park’s Glens Natural Area, which was designated a National Natural Landmark in 1969. Some think the scenery is worthy of being a national park; in fact, in the 1930s, the area was approved for just that, but World War II scuttled the idea. Instead, it opened as a state park in 1944.

If the necklace of scenic falls wasn’t enough of an attraction, the sprawling park in Pennsylvania’s Endless Mountains also has a beautiful mountaintop lake, 245-acre Lake Jean, where only paddling and nonmotorized boats are allowed. Though closed in 2020 because of the coronavirus, you can normally rent paddle boats, kayaks, canoes and paddle boards to tour the lake. Fishing is allowed. Swimming along the 600-foot beach also is a popular draw.

There are approximately 28 miles of hiking trails in the park. Though overshadowed by the famous waterfall hikes, I was bowled over by the 1.2-mile Highland Trail, which connects two of the major waterfall glens. A ridgetop gem in its own right, the trail passes though jumbles of house-size boulders and tabletop cliffs distributed by glaciers. At Midway Crevasse, you actually shimmy through a fracture in the Pocono sandstone.

If views are your thing, hike the 1.9-mile Grand View Trail to an old fire tower. You can’t climb the tower but you will find wide views of the entire park, the Allegheny Front that you are atop and the distant Susquehanna Valley. On a clear day, you can see three states.

These features attract hundreds of thousands of visitors a year from all over the country. But, no question, the falls are the marquis display.

They were formed by glaciers. Though Native Americans undoubtedly knew of them, the story goes that they were “discovered” by a father and son on a fishing expedition in 1865. The land was owned by Col. Robert Bruce Ricketts, who fought for the Union at the Battle of Gettysburg.

A lumber baron who owned a stately mansion on a nearby lake, Ricketts declared the two glens containing the waterfalls off-limits. He hired a crew of six men to build a trail along the falls from 1889 to 1893. The land that makes up a majority of the park was sold by Ricketts’ son to the state. Another 48,000 acres became state game lands.

The first thing you need to know about the Falls Trail is that, despite its popularity, it is no walk in the park. The ravines are steep and much of the trail consists of uneven slabs of stone steps that have no hand rails. The staircases, as well as soil and tree roots on other parts of the trail, are almost always wet and slippery. There are injuries and rescues every year in the park, some for people who have fallen and some for those unprepared for a rigorous hike who become exhausted or dehydrated.

It’s not a place for those with bad knees. And don’t tackle the hike wearing sandals or sneakers. Sturdy hiking boots with ankle support are advised. I hiked with two trekking poles that saved a couple missteps. And beware the crowds, especially on weekends, that can make the trail a crowded pathway. I went in the morning on a September weekday and encountered relatively few people. But when I returned to the trailhead parking lot at noon, it was almost full.

I ran into one couple from Texas who were exploring the falls after camping in Shenandoah National Park and were told by a Pennsylvania camper that they just had to see the waterfalls at Ricketts Glen. The couple said they were not disappointed. Tina Guenther said she hardly found so many waterfalls monotonous. Each waterfall, she said, had its own sound.

Amanda Brown, 26, on the other hand, was trekking up the gorges for the third time in three months. Asked why, she said she is humbled by the wonders around her. “I like feeling small so this is where I come,” she explained.

I found myself fantasizing about seeing the waterfalls in autumn, with orange, red and yellow leaves falling like confetti and forming rafts of color in the splash pools. Park officials say peak color is usually around mid-October.

No matter what direction you enter the glens from, the series of falls come fast and furious once you reach the first one. In between, the creek forms slides, tubs, flumes and subtle patches of whitewater. Moistened boulders in the creek are clothed in ferns. Rock formations tower overhead.

At almost all of the waterfalls, there are opportunities to pick your way to the base to stare up at the freefalling water and sometimes enjoy the mist on your skin. In a few places, you can almost stick your hand in a waterfall from the trail itself. No wading is allowed, though.

Most waterfalls were named by Col. Ricketts after family members, friends and Native American communities that lived in the area. The names of falls are displayed unobtrusively on signs off to the side.

Like snowflakes, no two waterfalls are alike. Some tumble in steps, some split, some form freefalls. One falls gracefully over a long, curved overhang. Some navigate around boulders and islands of trees as they tumble. Who knew moving water could be so creative?

Stay the night: The park has 10 cabins, 5 cottages, 120 tent and trailer campsites and group camping for up to 240 people. Some sites allow pets.

Activities: Picnic facilities are scattered throughout the park. A 600-foot beach is located on Lake Jean. Boat rentals are normally available but have been discontinued for now due to COVID-19. Only electric motors are allowed on fishing boats. Swim at your own risk. Winter activities include ice fishing, cross-country skiing, snowmobiling, winter camping and ice climbing.

Find your way among the falls: There are several ways to hike the three glens containing the 22 waterfalls.

One popular route is also the shortest, passing 19 of the falls in a 3.2-mile loop that begins at the Lake Rose Trailhead parking area. After a short hike, go straight onto the Falls Trail and head downstream into Ganoga Glen. At Waters Meet, cross a bridge and head upstream into Glen Leigh. At the top of the glen, turn left onto Highland Trail back to the parking area.

If you don’t think you can handle the steep Falls Trail, take the 1-mile Evergreen Trail loop beginning on route 118. Adams Falls, which some consider the most scenic, is located only about 100 yards down the trail.