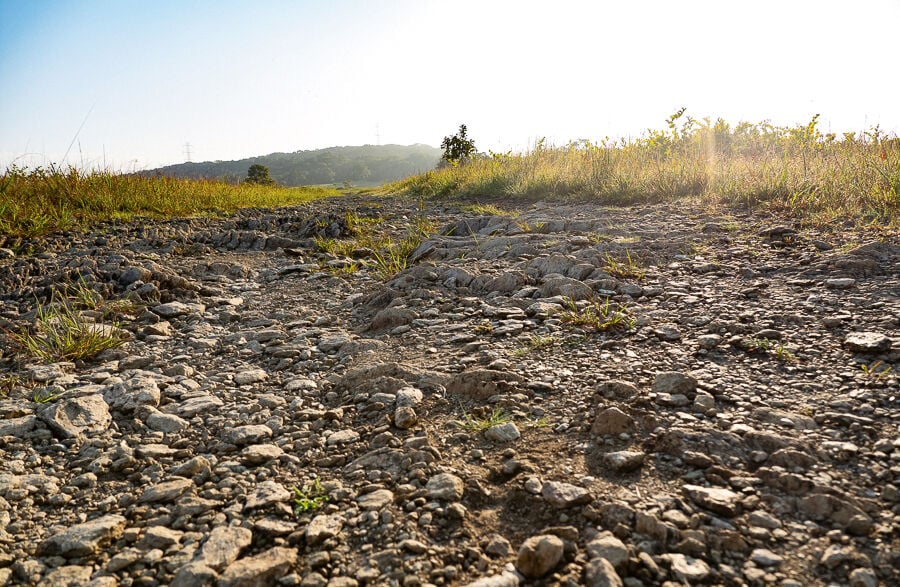 The terrain of serpentine barrens, like that shown here at the Soldiers Delight Natural Environment Area in Maryland, was once the bottom of an ocean floor. The  rock is so hostile to plant life that only specially adapted species can survive on it. 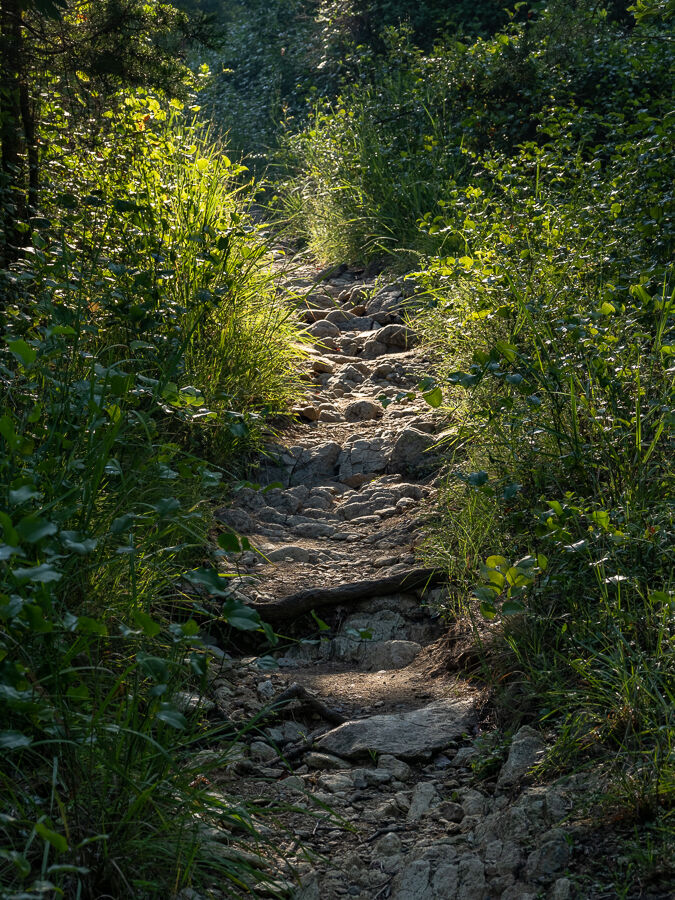 A rocky trail is etched through the Soldiers Delight serpentine barrens, just north of Baltimore. 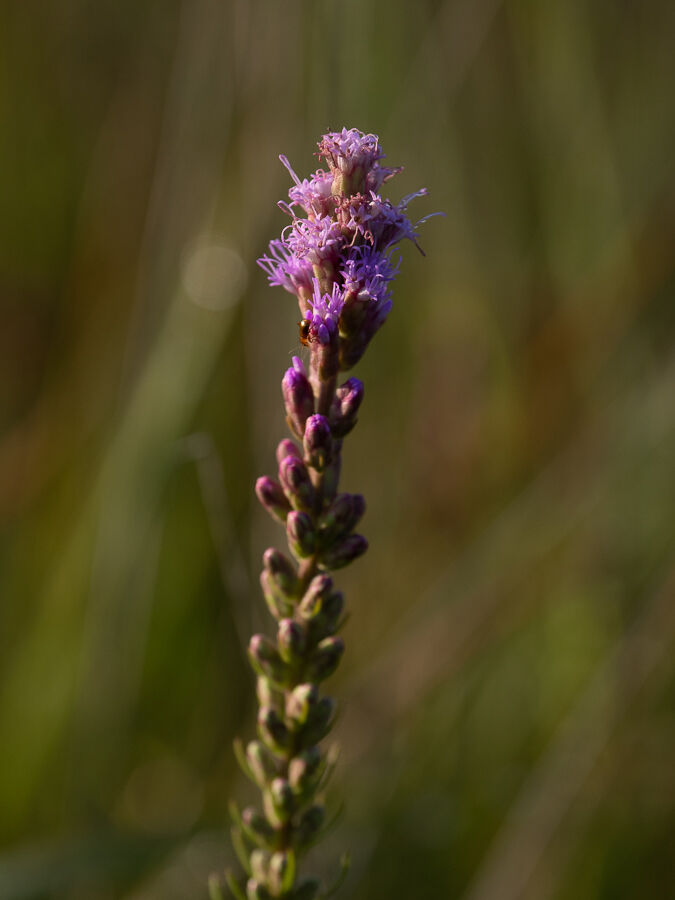 A prairie blazing star, more common in the dry grasslands of the central United States, grows in the unique serpentine barrens of the Soldiers Delight Natural Environment Area in Maryland. 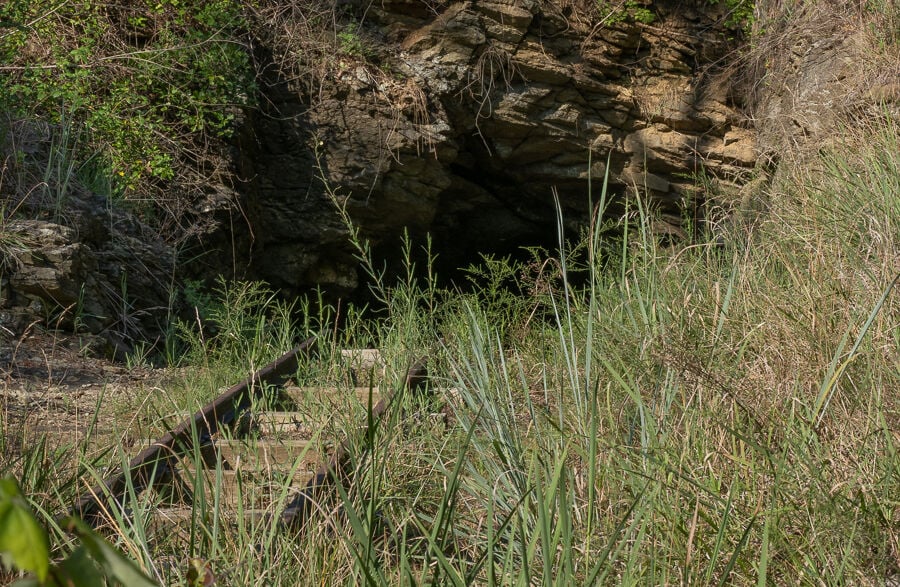 A rail line leads into an old chromium pit in the Soldiers Delight serpentine barrens north of Baltimore. In the 1800s, barrens in Pennsylvania and Maryland were the world’s largest source of chromium. 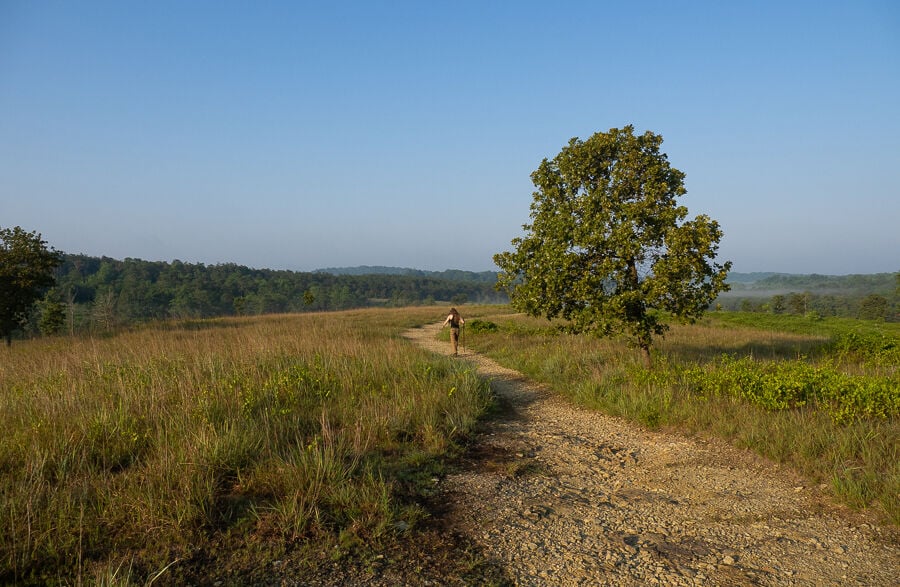 A lone hiker enjoys the expansive solitude of the serpentine barrens at Soldiers Delight Natural Environment Area in Maryland. 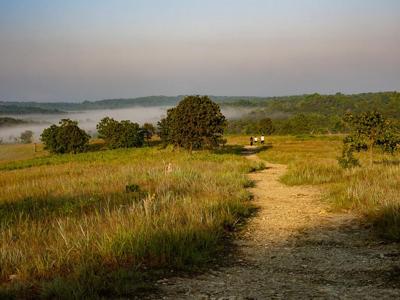 One of the largest remnants of the world’s rarest ecosystem lies in relative obscurity, just 12 miles north of Baltimore.

Here, in the curiously named Soldiers Delight serpentine barrens, you can walk 7 miles through a seemingly misplaced prairie grassland on hardscrabble trails.

This terrain — once the bottom of the ocean floor — is covered with brownish-green rock so infertile and hostile that only specially adapted plants can survive on it. Serpentine refers to the color and pattern of the rock, named for its similarity to the skin of a snake.

No one knows for sure why the area is called Soldiers Delight, but one popular theory is that soldiers in Colonial times used to hunt, ride horses and otherwise carry on in the barrens.

In the Soldiers Delight Natural Environment Area, with 1,900 acres of the rarified landscape near Owings Mills, I struck out on a hot August morning hoping to see some of the 30 perilously rare grasses, sedges and wildflowers that are found here and few other places on Earth.

The serpentine chickweed, for example, is found only in serpentine soil. Other imaginatively named wildflowers and grasses include serpentine panic grass, serpentine aster, Bicknell’s hoary rockrose and sandplain wild flax. Many of the wildflowers bloom in late summer or early fall.

Also in the landscape blend are savannas where gnarled and stunted blackjack and post oak trees, along with pea-stick sassafras, have forged an evolved existence to withstand the poor soil, heat, drought and fire.

On the dirt and rock path, I moved through waves of swaying bluestem and Indian grasses with blades that tinted red, green and yellow. One of the most common grasses, little bluestem, has gained purchase here by curling its long leaves inward during the hot midday hours. Serpentine chickweed has a dense layer of hair that reflects excessive sunlight.

The main barrens, a long bowl-shaped plain that stretched as far as I could see, is startling in its silence and unbrokenness, punctuated only by sentinels of stunted oaks.

What makes the barrens so, well, barren is that they are underlain by serpentine rock that is toxic to plants, with high concentrations of chromium, nickel and magnesium, while lacking the calcium that most plants need to grow. The soil is both poisonous for most plants and very shallow, consisting of eroded serpentine rock.

The rock was formed by magma pushed up from deep in the Earth to become the ocean bottom 500 million years ago. Later, when the serpentine rock was buried beneath the surface and continental plates crashed against each other, the rock was thrust to the surface in some places, forming islands of unique ecosystems.

Of the 40 barrens recorded in eastern North America from Alabama to Newfoundland, only about half remain. And most of those are clustered around the Maryland-Pennsylvania line.

When settlers arrived, there were perhaps 100,000 acres of barrens of open fields and oak savannas in Pennsylvania and Maryland that still allowed light to reach the ground and support barrens plants.

At that time, American Indians played a major role in maintaining the barrens by burning them periodically to keep the landscape attractive to big game for hunting. The mastodons and woolly mammoths, whose grazing helped to keep the barrens open naturally, were long gone, and any bison that remained were declining. Then settlers pushed the Native Americans out.

Though the barrens were useless for growing crops and timber, farmers often used them to graze livestock, which kept the fields open. And fires set by humans or lightning occasionally blazed through, killing plants and trees that had not adapted to fire.

Then, about 50 years ago, landscape managers began to aggressively suppress wildfire. Without it, Virginia pines began to encroach, forming dense clusters that eliminated the open ground needed for serpentine plants. Fallen pine needles formed a thin topsoil that allowed greenbrier and invasive plants to gain a foothold.

With no seeming good use for humans, the barrens were abused, used as trash dumps and developed into shopping malls, housing developments and golf courses.

A comparison of aerial photos of four Pennsylvania barrens from 1937 to 2011 shows the barrens shrinking from 2,037 acres to 52 acres. Today, all that remains are several thousand acres in a handful of spots in Pennsylvania and Maryland, protected by government agencies, conservation groups and easements from willing private landowners. The Nature Conservancy, in particular, acquired or protected many of the surviving barrens. Since the 1980s, there has been some momentum to restore and maintain them.

The barrens might have gone away completely without the tenaciousness of a few who saw the barrens as anything but. Soldiers Delight is by far the largest remnant and its rescue is a remarkable story of a few people who saw the beauty in harshness and crusaded for more than three decades against great odds to save it from oblivion.

When chromite was discovered in various barrens in the early 1800s, it became a prime source for the material used in the manufacture of chemicals, paints and dyes. An old mine pit with a section of railroad track can be seen at Soldiers Delight on the Choate Mine Trail.

Some of the finest buildings and homes in Baltimore and Philadelphia used the green-tinted serpentine rock from various barrens in Maryland and Pennsylvania in their construction.

Later, Soldiers Delight attracted squatters and was known as a forbidding place. Cockfights were common and federal agents plumbed the barrens for bootleggers.

Several local residents who fell in love with the barrens’ unconventional beauty rose up and began pressuring the state in the 1950s to buy the land for a public park. The state finally agreed, and the park opened in 1975. An educational visitor center was added in 1991.

The Maryland Wildlife and Heritage Service and volunteers have conducted three projects to restore about 1,000 acres of the barrens back to the open conditions needed for rare plants to survive. They removed smothering pine trees and killed invasive plants with controlled burns and old-fashioned yanking. BGE helped with the project on land that runs under a pair of power lines.

The controlled burns have been quite effective. Withered gray stumps of Virginia pines rise from the grassy plains like bleached tombstones.

Paula Becker, who heads restoration work at the barrens, paused for a moment when asked to describe the allure of the barrens. “It takes a little bit of work to love them sometimes,” she said. “But they have a subtle beauty. Each season is different. I like them first thing in the morning when dew is on the grass and the droplets are sparkling. These open areas of grass are waving back and forth and it’s lovely.