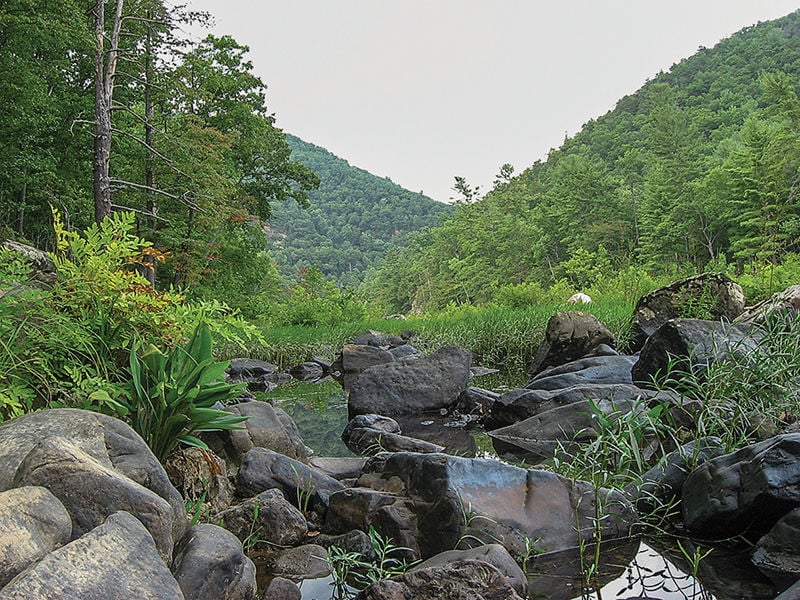 During the summer, when water in Virginia’s Maury River is low, portions of the rocky riverbed come alive with ferns, flowers and grasses. (VA DCR) 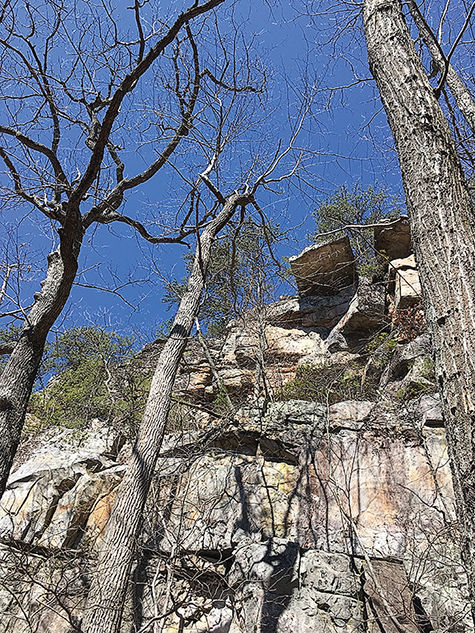 The Maury River Wall, a classic Goshen climb, looms 75 feet over the preserve trail along the river, which offers 14 routes up to the top. (Leslie Middleton) 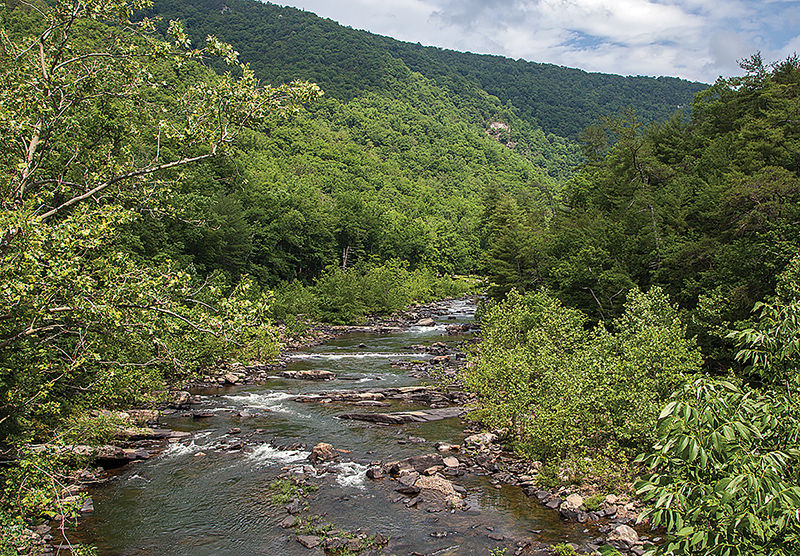 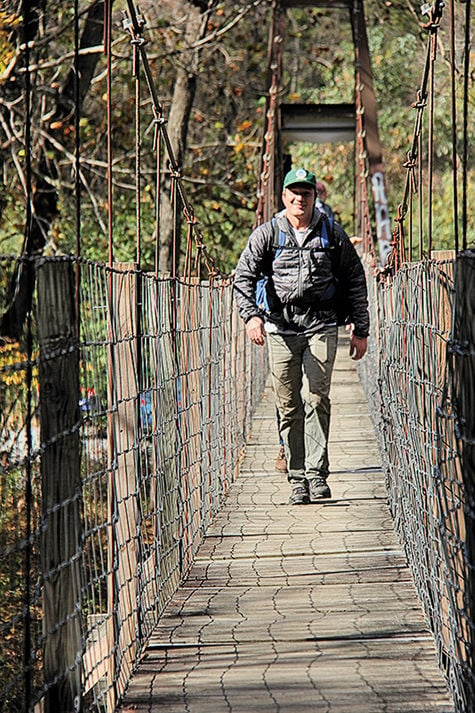 In the annals of Virginia whitewater paddling, the Maury River at Goshen Pass has earned a reputation. The five-mile stretch of river, a tributary to the James River in mountainous western Virginia, can be a bruising paddle even if you’re very skilled and very lucky. In high water, it can be downright foolhardy.

Experienced and knowledgeable paddlers nevertheless flock to Goshen when the river is up but, fortunately, there are plenty of other ways to experience the waterway and protected lands that surround it.

Goshen Pass consists of a narrow route through the Appalachian Mountains, shared by the Maury River and Virginia Route 39, from the quiet town of Goshen to the community of Rockbridge Baths.

If you’re traveling through the pass by car for the first time, ask someone else to do the driving because you’ll likely be distracted by the scenery. Around every bend, there’s a lot to see — the river below, the folded strata of mountain outcrops and thick woods climbing high along the roadside, flanked by old stonework draped with moss.

Some refer to this narrow river valley as “the gorge,” where the river has been carving its way through the mountains for millennia. It was once called Dunlap’s Gap, after one of the earliest settlers in the high valley where the town of Goshen serves as the gateway to the river gorge from above. Here, the Calfpasture and the Little Calfpasture rivers flow through small valleys suited to farming before joining to become the Maury. Through successive waves of settlement, the town has served as the stagecoach and railroad routes to the west, a timber depot and an agricultural center.

The Maury River was called the North River until 1968, when the name was changed to honor Matthew Fontaine Maury. Maury made extensive contributions to scientific research in oceanography, meteorology, history and geology during the 1800s. Known as the “Pathfinder of the Sea,” Maury in later life taught meteorology and physics at the nearby Virginia Military Institute in Lexington and especially enjoyed summer trips to Goshen Pass.

After he died in 1873, Maury’s family moved to Richmond, taking his remains via the river road between Lexington and the nearest railroad station in Goshen. “When you carry me through the Goshen Pass, let it be in the spring-time, and pluck the rhododendron and the laurel and shower them on my bier,” he had asked — and that last wish was granted.

When I first visited Goshen Pass many years ago, the Maury River was flushing through spring rains, a brownish-gray froth pillowing over unseen boulders, scouring its bed of every last pebble. On a recent spring day, the waters were calmer. I opted to hike a three-mile loop trail at the Goshen Pass Natural Area Preserve, 937 acres of chestnut oak and hickory forest that abuts a little more than two miles of the river.

I tucked my car into a small parking area next to the river and ascended chunky wooden steps to a small suspension footbridge 15 feet above the river, running clear and quiet below.

Downstream, a lone fly fisherman was planted in the river, his bib overalls as brown as the trout he was likely courting from the shadow of a car-size boulder.

At the other end of the suspension bridge, I entered the preserve and followed a well-worn trail along the river, navigating rocks, roots and sandy loam deposited by the river during higher flows. To my left, the hillside climbed up through a forest of pine and hickory, amid stony outcrops the size of three-story buildings.

I followed the trail, marked by a single white blaze, up a steep series of switchbacks. The air temperature cooled with altitude, but the sun was warm and so was I.

The trail followed the edge of a steep swale that was wet from seeps and small waterfalls dripping over square gray rocks. The sound of the river below softened, then disappeared. Though a couple of hikers passed me early on, I hadn’t seen anyone for a half hour.

Goshen Pass Natural Area Preserve was protected by the state in 1954 after a group of Rockbridge County citizens organized to purchase the timber rights. The Virginia Department of Conservation and Recreation then purchased the land for its wild and extraordinary beauty. In 2002, when three species rare to Virginia and an exemplary chestnut oak forest community were identified on the tract, it became part of the state’s natural area preserve system.

“One of the fascinating things about the Appalachians,” said Ryan Klopf, preserve manager for Virginia’s Division of Natural Heritage, “is that many of the ecosystems are old, just like the mountains.”

More than 400 million years ago, this area was a large inland sea, collecting sediments that metamorphosed into sandstone, shale and limestone that became mountains much higher than those we see today. Exposed strata — where the river has cut through Little North, Forge and Hogback mountains to create Goshen Pass — dramatize eons of uplift, compression and faulting, demonstrating the power of water and wind.

These processes result in what Klopf calls “interesting biological anecdotes” — in this case, patches of a species of freshwater cordgrass, marsh vetchling and sand grape rarely found in Virginia, but common in the Midwest.

The overlook at the top of the trail was stunning — patches of hemlock and pine amid the forest still a soft winter gray, ridges receding into the distance. The wide flat trail along Chambers Ridge took me through open stands of hickory and chestnut oak and past a dark, round vernal pool. Through the trees to the northwest, I could see across the valley to the next ridge of mountains; below, the steel blue of a large impounded lake at the Boy Scout camp that abuts the preserve.

The shadow of a large bird slipped across the path through the crinkly leaves I shuffled through at each step. Looking up into a blue and cloudless sky, I saw the blunt body of a raven as it disappeared into the valley.

Where the open ridge dips into a slight saddle, the trail divides, and a sign points to Jump Rock, a summit for those who want an even wider view. The Jump Rock Trail takes hikers and hunters into the Little North Mountain Wildlife Management Area, where the rules are different. Seasonal hunting is allowed, and backcountry camping offers a wilderness experience for those who want to walk in.

Tyler Urgo is the supervisor for this wildlife management area, as well as the Goshen Wildlife Management Area on the other side of the river, for the Virginia Department of Game and Inland Fisheries. “There are so many opportunities for remote, isolated experiences here. We keep the gates closed in the summer to keep the vehicle traffic down,” he said. “Depending on the time of year, it’s possible to hike in four or six miles and really have solitude.”

Together, the natural area preserve and wildlife management areas comprise almost 35,000 undeveloped acres of land. “Some of the wildlife management is targeted at neotropical song birds that migrate here,” Urgo said. In early spring, it’s not uncommon to spot golden eagles soaring near the ridge tops. In the summer, look for cerulean and other warblers in the more open areas.

The trail traversed the side of the slope through dense wild azalea and blueberry bushes on the way back to the river crossing. I stayed alert to the possibility of bear but only heard the scatter of leaves from squirrels and the twitter of small birds in the brush.

Close to the river, where the trees are taller and the understory thins, my eye caught a splash of color. I knelt to lift the blossom of a trout lily from its camouflaged speckled leaves. I then realized that I could see them in every direction along the path and counted my good fortune for spotting this lovely spring ephemeral.

Driving back down Route 39, I stopped at the picnic wayside, empty on this midweek afternoon. It’s obviously a popular swimming spot in the summer — rounded boulders and flat rocks flank a wide grassy riverbed.

Adjacent to the parking area, there’s a monument to Maury the oceanographer, a heavy bronze plaque on a squat stone inside thick black anchor chains. Once charting the ocean currents, Maury finally fetched up on the rocks of an ancient inland sea. It’s no wonder he wanted the trip through Gosh'en Pass to be his last.

Explore the wilds of Goshen Pass