You have permission to edit this article.
Edit
Welcome, Guest
News
Travel
Columns
Opinion
Multimedia
Bulletin Board
About
Contact Us
e-Edition
Subscribe
Donate
1 of 8 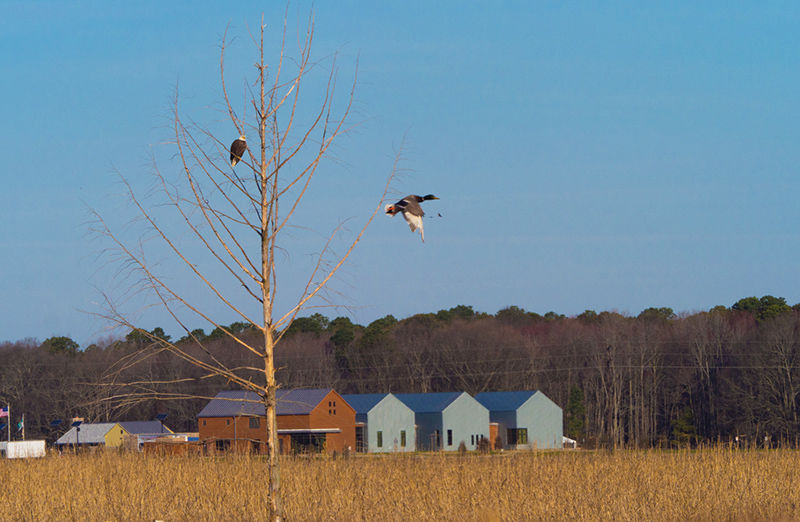 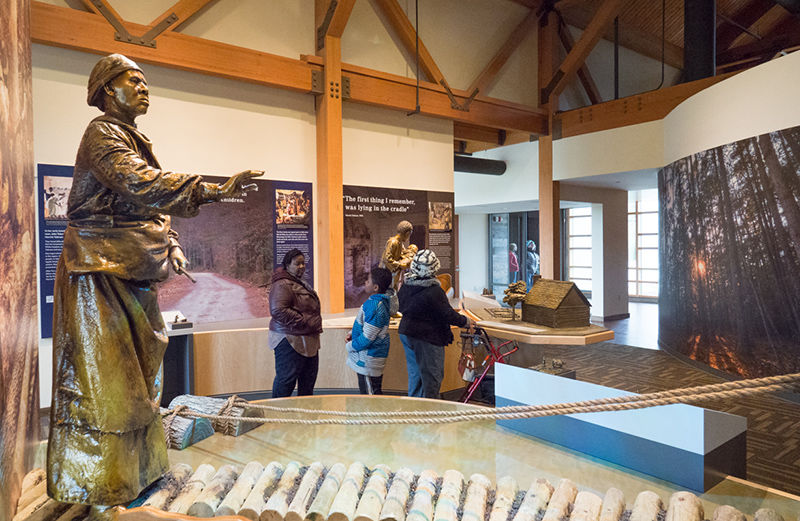 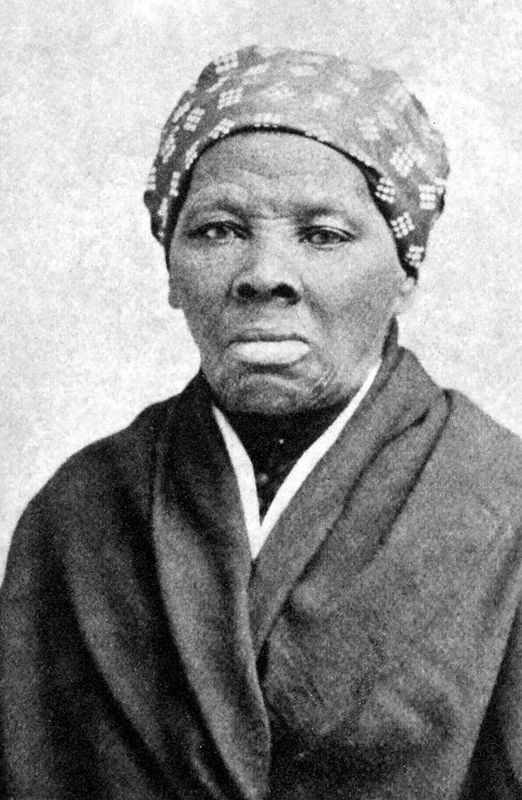 Harriet Tubman, shown here in 1895, was born into slavery around 1822 in Dorchester County, MD. She escaped to the North in 1849, then returned to rescue others. (NPS) 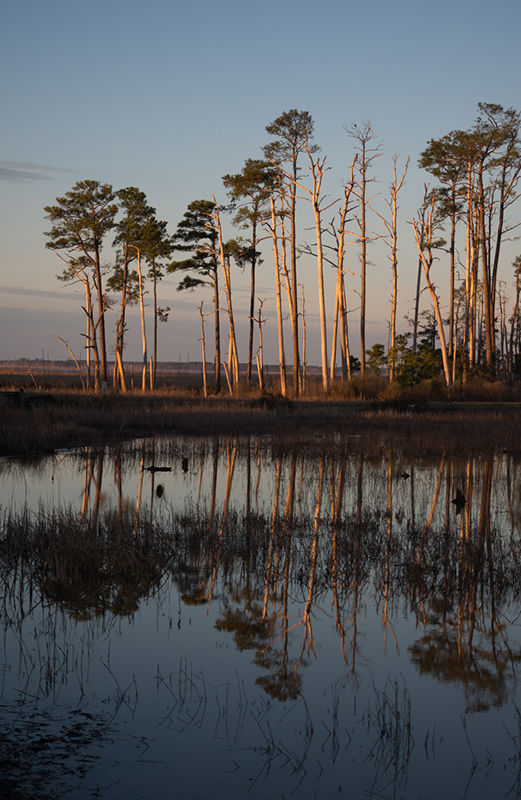 The visitor center and 17-acre park are adjacent to the Blackwater National Wildlife Refuge, where the landscape looks much like it would have in Tubman’s time. 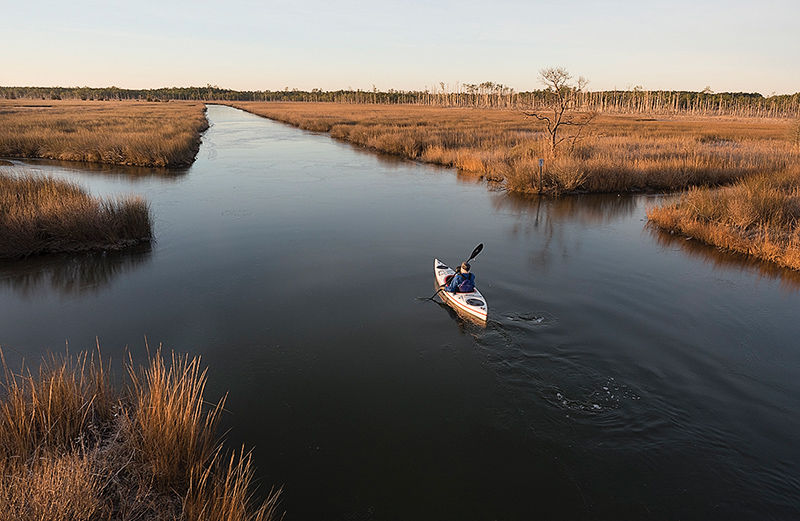 Stewart’s Canal in Dorchester County was dug over a 20-year period by free and enslaved blacks and is now on the Harriet Tubman Underground Railroad Byway. African-American men who worked Chesapeake waters were often able to share secret communications about escape plans. 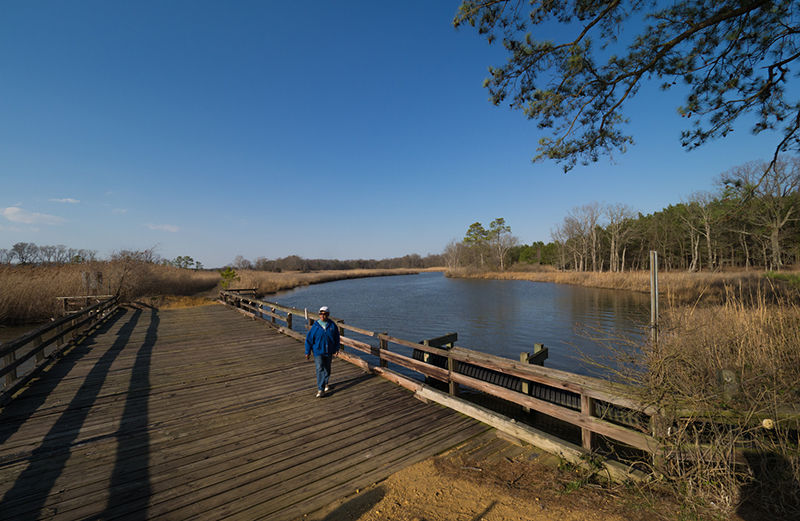 Paulette Green crosses the old Poplar Neck Road bridge over Marsh Creek in Caroline County, MD, where there was much activity on the Underground Railroad. 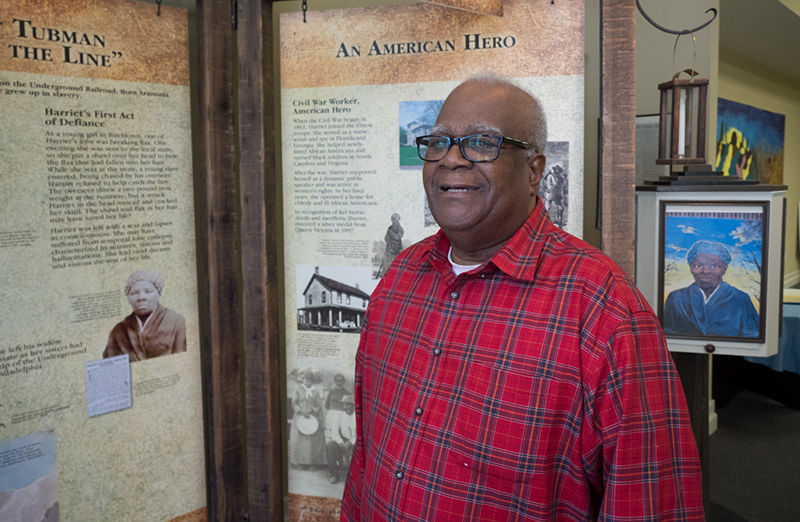 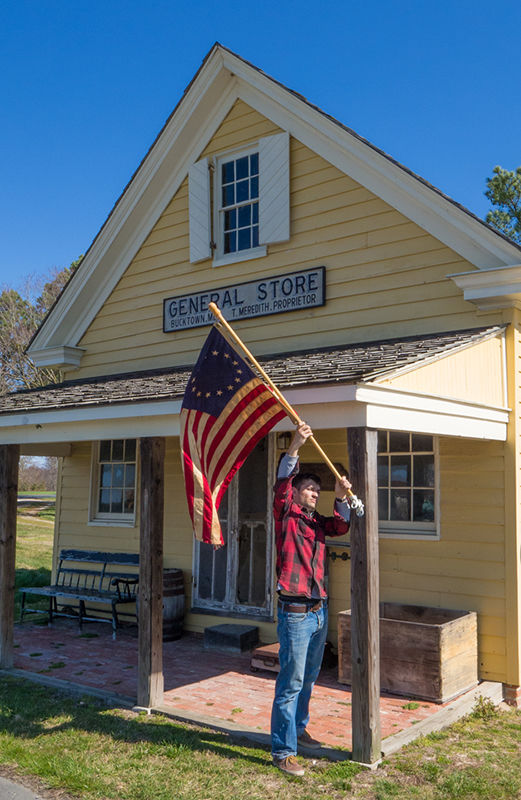 Matt Meredith hangs a flag at the Buckman Village Store in Maryland where, as a young girl, Harriet Tubman was severely injured by an overseer.

Harriet Tubman, shown here in 1895, was born into slavery around 1822 in Dorchester County, MD. She escaped to the North in 1849, then returned to rescue others. (NPS)

The visitor center and 17-acre park are adjacent to the Blackwater National Wildlife Refuge, where the landscape looks much like it would have in Tubman’s time.

Stewart’s Canal in Dorchester County was dug over a 20-year period by free and enslaved blacks and is now on the Harriet Tubman Underground Railroad Byway. African-American men who worked Chesapeake waters were often able to share secret communications about escape plans.

Paulette Green crosses the old Poplar Neck Road bridge over Marsh Creek in Caroline County, MD, where there was much activity on the Underground Railroad.

Matt Meredith hangs a flag at the Buckman Village Store in Maryland where, as a young girl, Harriet Tubman was severely injured by an overseer.

Water, marsh, trees, sky. This is the landscape of Dorchester County, MD, repeating itself along undulating narrow roads with high ditches for dozens of flat country miles.

This is the land where Harriet Tubman was born into slavery in 1822, where her sisters were sold to distant plantations and Tubman was sold to a new master at the age of 6. It’s the land she fled in 1849 to become a free woman in Pennsylvania, and it’s the place to which she returned to free her brothers, parents and approximately 70 others.

With a pistol at her hip and a no-nonsense demeanor, Tubman guided people to freedom through the Underground Railroad, a network of pathways and safe houses established throughout the United States to help enslaved people escape to the North. Tubman liked to say that she never lost a passenger.

Now, more than a century after her death, the woman born Araminta “Minty” Ross is getting her due in the place where she was born. She changed her name to Harriet after marrying John Tubman, a free black man, in 1844.

In 2000, a collection of Maryland officials, federal partners and nonprofit groups, like the Chesapeake Conservancy, began working to preserve sites and landscapes associated with Tubman on Maryland’s Eastern Shore. Their combined efforts have created and linked a network of parks, preserved landscapes and historic sites that honors Tubman and immerses visitors in the Chesapeake landscape.

In 2007, the state acquired land in Dorchester County for the Harriet Tubman Underground Railroad State Park. On the weekend of March 11-12, 2017 — timed to mark Tubman’s March 10 birthday — a new visitor center opened as a joint project between the state and National Park Service. The building is located on the grounds of the 17-acre state park adjacent to Blackwater National Wildlife Refuge.

The National Park Service plans to add a 480-acre parcel, known as the Jacob Jackson site. Jackson, a free black veterinarian, was responsible for telling Tubman’s family that she was coming for them, and when.

The Harriet Tubman Underground Railroad Byway knits all of these sites together, providing a map and background information for 45 sites on a 125-mile route through Dorchester and Caroline counties.

The byway is at times an emotional journey, but it is one worth taking. To best absorb Tubman’s story and experience her landscape, plan to spend at least one full day in the area. More is better. There are many worthy stops on the byway and places where you might want to linger for hiking, cycling, kayaking or birding. (The Blackwater refuge itself could easily provide a day of outdoor diversions and would work well combined with a bike or kayak tour.)

For a day trip by car, begin with a morning stop at the Harriet Tubman Underground Railroad Visitor Center, about 10 miles south of Cambridge.

The design of the visitor center — a LEED Silver-rated building — complements the landscape. Inside, exhibits highlight quotes from Harriet Tubman against the backdrop of beautiful photographs and re-imagined scenes like those of a young Tubman skinning a muskrat and a regal, older Tubman relaxing on a bench.

While the exhibits are somewhat sparse, take your time. Sit on a bench and watch the names of the people she rescued scroll on a screen as a gospel singer croons That Old Ship of Zion. Tubman used words from that song in a letter to signal that the time for her brothers’ escape had come. Or watch a tribute to Tubman, featuring the voices of her descendants as well as Sen. Ben Cardin and Rep. John Lewis.

At midday, you could eat a picnic lunch at the park or swing back to Cambridge. Another option is the watermen’s village of Hooper’s Island, about a 30-minute drive from the visitor center. Enjoy lunch and a water view at Old Salty’s, where anything you order will be among the best you have ever eaten, especially if it’s a fresh catch.

After lunch, head to the Bucktown Village Store, which is also located along the Blackwater Wildlife Refuge, about 8 miles from the visitor center. Tubman, who spent much of her early life hired out to various overseers, often went to this store with the farm’s cook to purchase food. During one visit, she encountered an enslaved man who was in the store without permission to leave his work. The overseer ordered Tubman to tie him up, but she refused. As the man ran away, the overseer threw a 2-pound weight at him, but hit Tubman instead. The injury caused Tubman to have dizzy spells and chronic pain throughout her life.

The Meredith family, which has lived in Dorchester County for generations, has lovingly restored this country market. Susan Meredith is full of information about Tubman’s life and times. She leads kayak tours through the marshes and bicycle tours along the country roads. Both offer an immersive experience. The kayak tour is particularly evocative. Meredith will point out different trees and waterfowl as well as the natural features that helped Tubman hide.

From the Bucktown store, drive for a few minutes down Greenbriar Road to the Brodess Farm, where Tubman was enslaved. All that remains of the original property is the land. Edward Brodess did not have enough work for Tubman, her mother or her siblings, so he rented them out to others, who were often cruel. When Harriet took ill, these overseers would send her back to her mother, who would nurse her to health only to have her taken away again.

After seeing the Brodess Farm, turn back toward the Bucktown store and take Bestpitch Ferry Road to the end. Here, at the Bestpitch Ferry Bridge, both free and enslaved blacks operated ferry crossings. This provided an opportunity: People escaping slavery could be hidden in the marshes and then stowed away on the ships bound for northern ports and freedom. Muskrats, squirrels and fish sustained them on these journeys.

From the bridge, drive for about 30 minutes to the Mount Pleasant Cemetery, which historians believe was a rendezvous point for the Underground Railroad. The route from Cambridge takes travelers through East New Market and into Preston, once a busy trucking depot.

In Preston, you are close to a special property that’s not on the byway but worth a stop: Mount Pleasant Acres, an organic farm that is home to a spectacular tulip poplar known as the Witness Tree. You must call ahead to the farm’s owners, Paulette Greene and Donna Dean, if you want to make the trek (410-673-2787). Greene and Dean welcome visitors and will consider hosting group camping on their land.

The tulip poplar, thought to be at least 150 years old, stands in the woods toward the back of the farm. It towers over all the trees on the property. Stand near it, and you are in the shadow of history. Students from Morgan State University dubbed it the Witness Tree: It was here when Harriet Tubman was leading her Dorchester brethren to safety. It stood through slavery, the Civil War and the era of freedom that followed. In the nearby woods, you can view what Tubman might have seen here — open forest, a nearly dry creek bed, brambles and grass.

Afterward, as your tour continues, drive through the small town of Choptank, where a dock protrudes into the namesake river. It’s a pretty spot.

From Choptank, follow the byway about 25 miles back to Cambridge. There, stop by the Dorchester County courthouse, the site of slave auctions in Tubman’s time.

If it’s still open for the day and you have time, stop in the Harriet Tubman Museum on Race Street in the heart of Cambridge, where former teacher Bill Jarmon offers a detailed and enthusiastic lesson on Tubman’s Eastern Shore experience. The small center has the feel of a Quaker meeting house, and guides can answer lots of questions about the long effort to give Harriet Tubman her due. Jarmon also leads walking tours of town that highlight the journey to freedom; sign up in advance.

If you can spend only one night, stay in Cambridge. Stroll down Long Wharf, another byway stop, where ships bought and sold kidnapped Africans. Today, the shoreline includes a public marina. Race Street is lively in the evenings, with lots of restaurants and brew pubs.

If two nights are possible, spend the second one in Denton, in Caroline County. There you can see the Denton Steamboat Wharf as well as the Tuckahoe Neck Meeting House, where local Quakers helped sustain the Underground Railroad network. Adkins Arboretum, another byway stop, is worth a look.

If you stay overnight, be sure to find an open location where you can view the Eastern Shore’s dark night sky. The North Star guided Tubman out of this land, to Pennsylvania and then to Auburn, NY, where she and her second husband, Nelson Davis, adopted a baby girl named Gertie. At long last, she found peace and the freedom she always knew she deserved.

“ My home, after all, was down in Maryland, because my father, my mother, my brothers, and sisters, and friends were there. But I was free, and they should be free.”