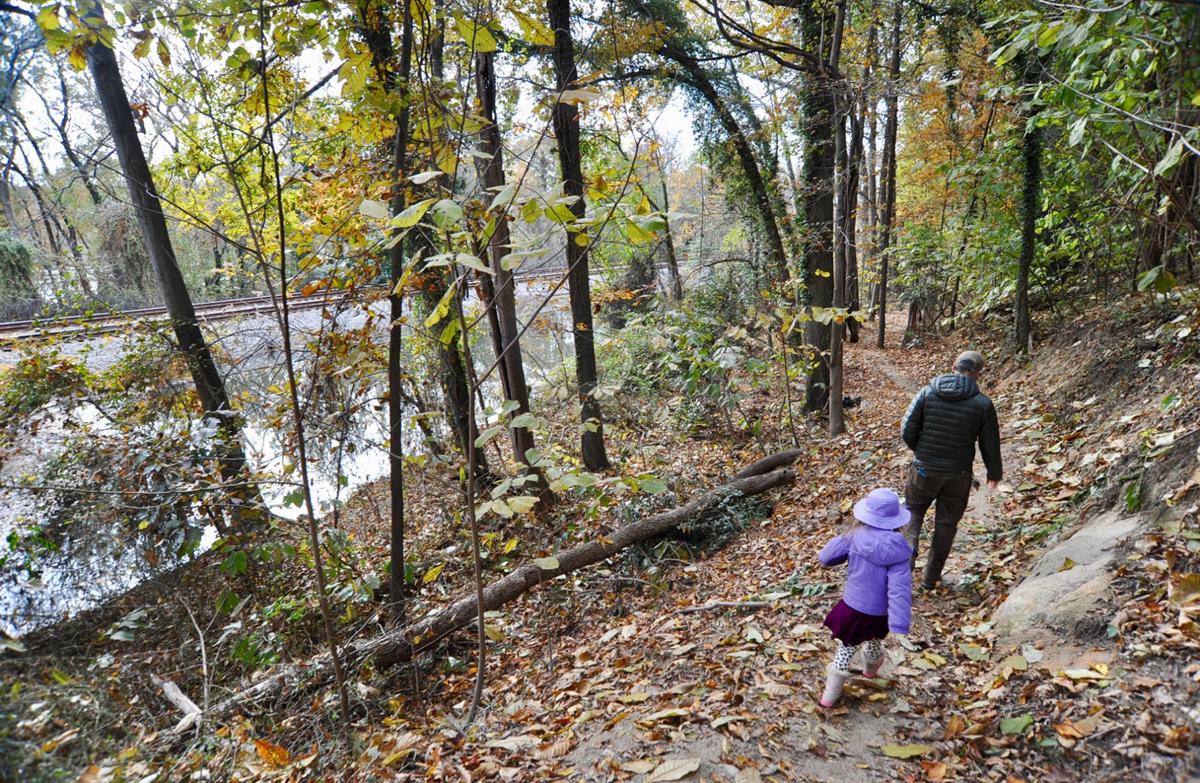 A new section of Richmond’s North Bank Trail leads hikers along to Maymont Ramp, completing a popular 6-mile loop around the James River. 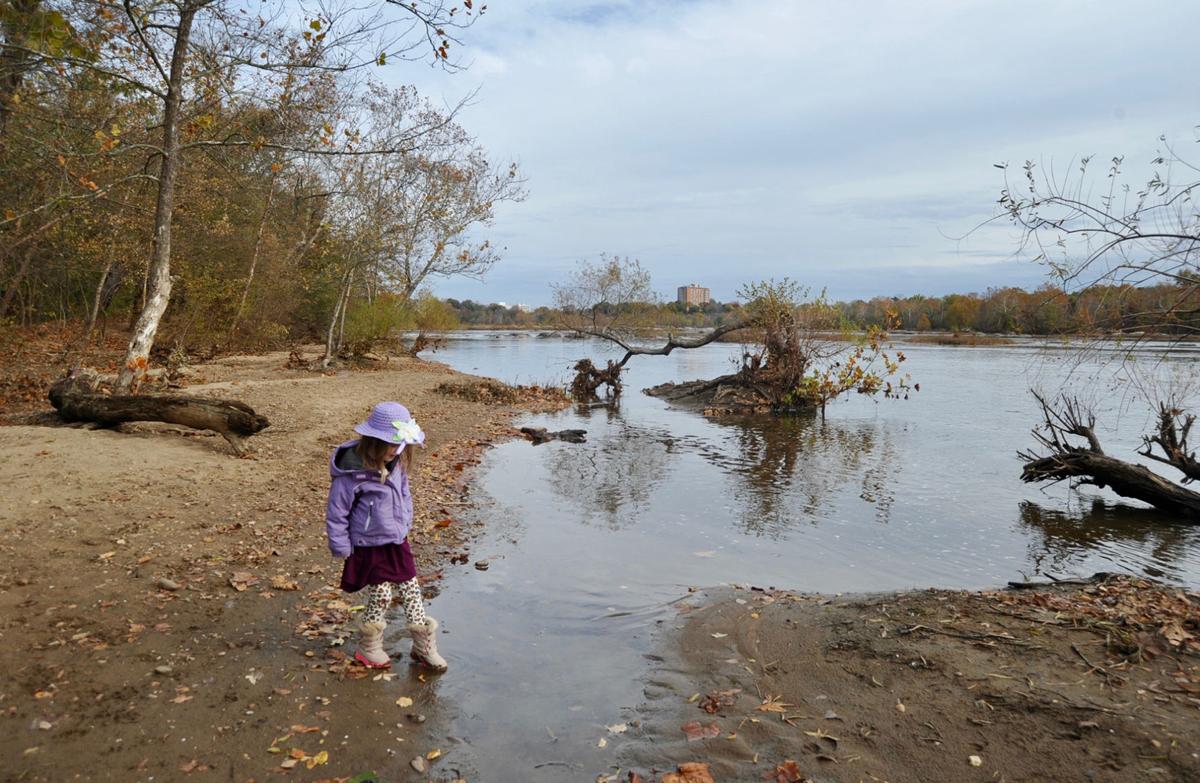 Texas Beach, along the James River near Richmond, offers sandy shores and a quiet escape from the city during the less busy winter months. 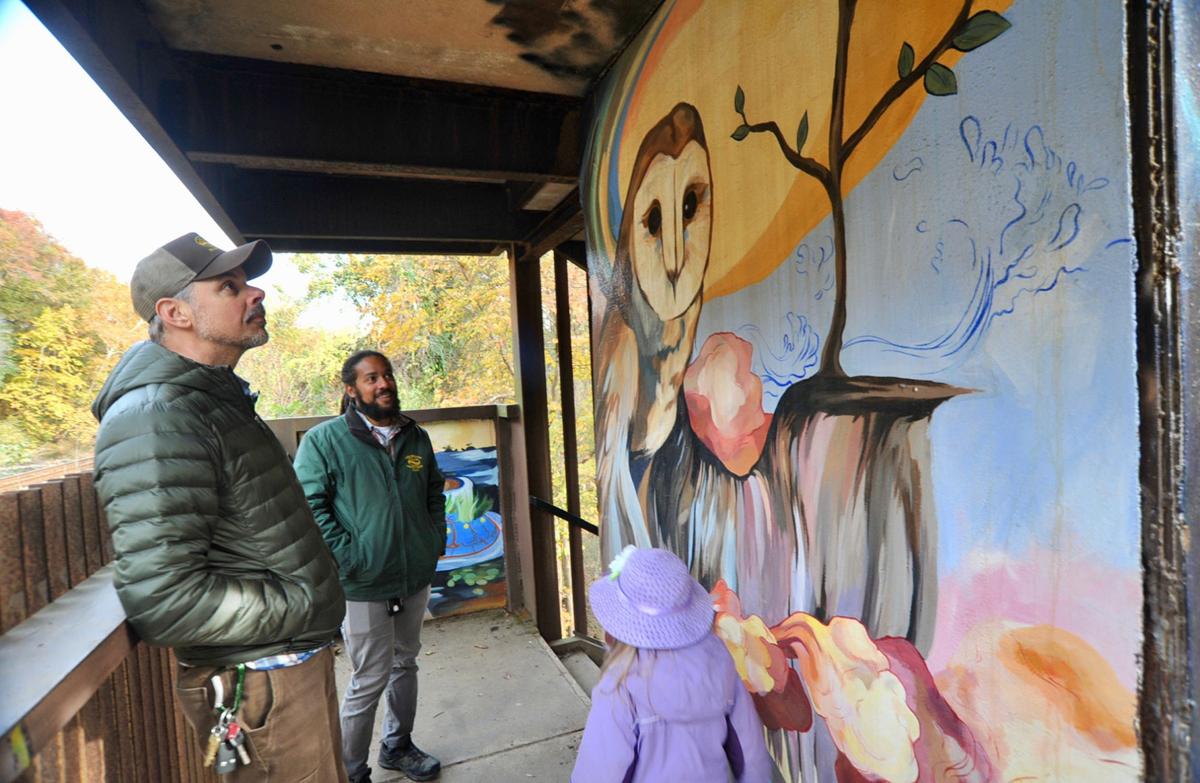 Michael Burton (left) and Nathan Burrell, who both help manage James River Park in Richmond, admire some of the murals painted by local art students on the park’s Texas Tower. 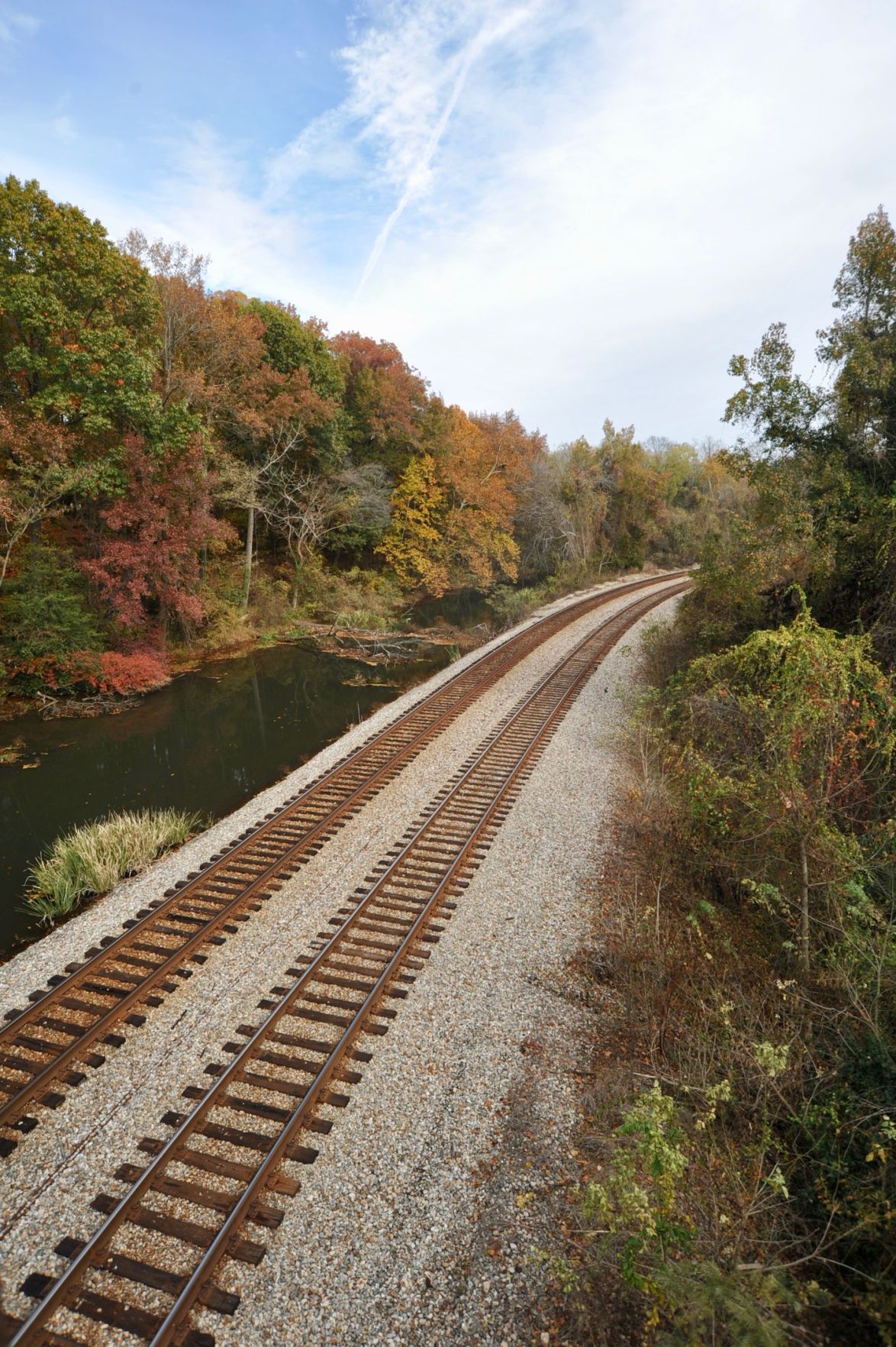 Hikers can view an active railroad from a footbridge that carries them over the tracks and some pools of water on the way to Texas Beach. 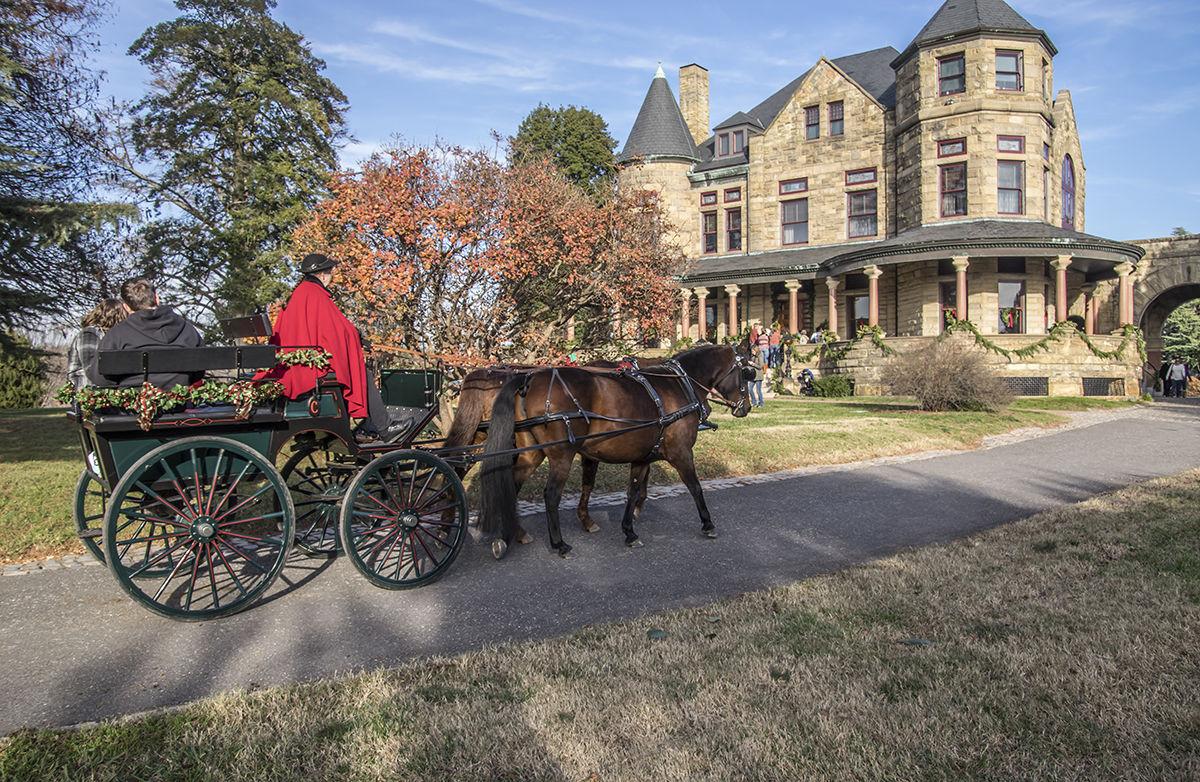 Tours of Maymont are especially popular during the holiday season, when the Gilded Age home on the banks of the James River would have featured greenery from the surrounding acreage.

In late summer, a sandy bank of the James River near downtown Richmond known as Texas Beach can get raucous with crowds eager to stick their toes in the water. But on a midwinter afternoon, the river views feel both remote and peaceful.

It’s nice to set foot on a sandy shore — so close to a bustling urban center — even if it’s too cold to dip your toes.

“You picked a good day to come with no one really out here,” said Michael Burton, trails and greenways superintendent for the City of Richmond, which operates the James River Park, including its beach and surrounding trails. “In the summertime, this place gets wild.”

The city has tallied about 2 million people a year visiting this free trail system, about 60% of them from out of town, said Nathan Burrell, maintenance and operations facility manager for the city’s Parks, Recreation and Community Facilities Department. A 2017 economic impact study shows that park visitors brought an additional $33.5 million per year into Richmond, with hikers and bicyclists popping into the Virginia capital’s bumper crop of breweries and restaurants after an outing.

That could be because this park system, as far-flung as it feels on a wintry day, is connected to both sides of the river by a loop of trails that are close to other attractions. A new section of the North Bank Trail now cozies up to Texas Beach, allowing hikers to walk along the water, and spits them out at the foot of Maymont, a historic home on sprawling grounds.

The afternoon of our visit, workers were putting the finishing touches on a series of wooden stairways called the Maymont Ramp that connects the new trail to the historic property, uphill neighborhoods and additional parking. The impressive wooden structure was funded by one of several outdoors groups that frequent this trail.

“This is how our trails and park system works,” Burrell said. “We all come together in an ad-hoc coalition to make this jewel in the city.”

The benefit of traversing such a heavily trafficked trail is that problem spots are regularly addressed. A wooden boardwalk was built across a formerly muddy section leading through low-lying woods — no small feat considering its elevation and distance from the upland parking lot.

“It was going to be an ordeal to carry the boardwalk material from here,” Burton said. So, volunteers from a group called the James River Hikers used a replica bateau — a flat-bottomed boat used in the colonial era — to bring the wooden planks across the James River to a landing near the construction site.

That same volunteer group led the way on a graffiti-reducing art project along the trail that has become one of its draws. Starting at the Texas Beach parking lot (mapping apps will lead you right there) and heading to the beach, you’ll cross a concrete footbridge that spans the CSX railroad tracks and a creek below. At the end of the footbridge is a steel-and-concrete tower of stairs, called Texas Tower, which, until last year, was a hotspot for graffiti artists wanting to leave their mark.

Dennis Bussey, who leads the James River Hikers, rallied volunteers to repeatedly cover the graffiti with brown paint, but it just kept coming back, Burton said. Then, in the fall of 2018, the parks department asked art students from Virginia Commonwealth University to cover the tower’s concrete walls with murals. Most feature local wildlife like turtles, blue herons, frogs and owls. Others are more whimsical, and one portrays Texas Beach on a hot day, with swimmers scattered across the rocks.

The artwork did the job.

“This tower, for years and years, was the graffiti magnet of the park,” Burton said. “It’s interesting, because everywhere people have painted [murals], we’ve had no issues since.”

The beach is a short walk from the bottom of the tower, where stairs make easy work of the change in elevation. Thick woods give way to the wide James River and to a 50-yard stretch of sandy shore that passes for a beach in these urban parts. Texas Beach goers also recline on the surrounding rocks and along the broader shoreline.

The beachy part of the walk can be muddy in parts, especially if it’s rained recently. But another benefit of a winter visit is that the summer deluges that make it a soggy trip to the water at times are long gone. With the right footwear, my 5-year-old daughter was happy enough to splash in puddles and look for the shells left behind by clams and critters.

Clusters of mammoth-size rocks are signatures of the river’s “fall line” where it changes elevation. They set this section of the James apart — and provide sunny surfaces where you can enjoy a packed lunch.

Burrell said that the granite from rock formations like these was used to make the darker-colored base of the Washington Monument in the District of Columbia until the Civil War began and the South stopped sending supplies to the North.

“Many of the buildings you see in this area are made from this rock,” he said.

Heading back from the beach, an intrepid hiker has several options after reaching the Texas Tower. The new trail section means a walker can continue west along the river rather than heading back to the parking lot and through the neighborhood to pick up the North Bank Trail.

One option is to take the 6-mile-plus loop that includes both banks of the river and two bridges, a popular route for cyclists and runners alike when the weather is right. From the Maymont Ramp, the North Bank Trail heads west to connect with the “Nickel Bridge,” which goes by the name Boulevard Toll Bridge on maps. (The toll was a nickel in the bridge’s early days, and the nickname stuck.) Walking across the bridge on pedestrian lanes is free and an easy link to the Buttermilk Trail, which heads back east along the river’s south bank.

From there, trails meander through the river’s Belle Isle, and a series of beautiful bridges — try to hit them at sunset to see the river glow with color — that lead back across the river to the start of the North Bank Trail.

But, if you have a sore-footed 5-year-old with you, the full loop — and the cold — may be too much for one afternoon. Instead of taking the longer route, try following the new trail section to Maymont Ramp and its namesake historic home, which offers indoor tours from noon to 5 p.m. Tuesday through Sunday. (A $5 donation is suggested.) The 100-acre Maymont grounds include several outdoor gardens, a farm where children can feed the goats and a nature center that will reopen in the spring of 2020 after renovations.

The Dooley family that called this mansion home donated the property to the city after their deaths in the 1920s. It opened as a public park and museum six months later, presenting a picture of life at the mansion during the Gilded Age.

The Gilded Age, from the 1890s to 1920s, is remembered for its opulence in an era when the absence of income tax and anti-trust legislation made fortune-building easier. Out of approximately 4,000 millionaires in the United States at the time, the Dooleys were among only eight located in Virginia, said Kathy Alcaine, senior manager of programs and interpretation for the Maymont Foundation.

James Dooley, an executive with the Chesapeake and Ohio Railroad Company, amassed his fortune mostly by building railroads like the one that runs today just a stone’s throw from the mansion along the river.

Maymont puts on its finest for the holiday season, when the couple would have entertained almost constantly. Alcaine said the foundation tries to decorate the home like the Dooleys would have, using greenery from the expansive grounds (or, at least, very good artificial replicas that don’t pose fire hazards) to bedeck chandeliers, mantels and stair rails.

For a whiff of the greens still growing, just take a walk outside, where the 100-year-old trees and their gnarly, low-lying boughs are just as impressive as the indoor decor.

Wander along the James River