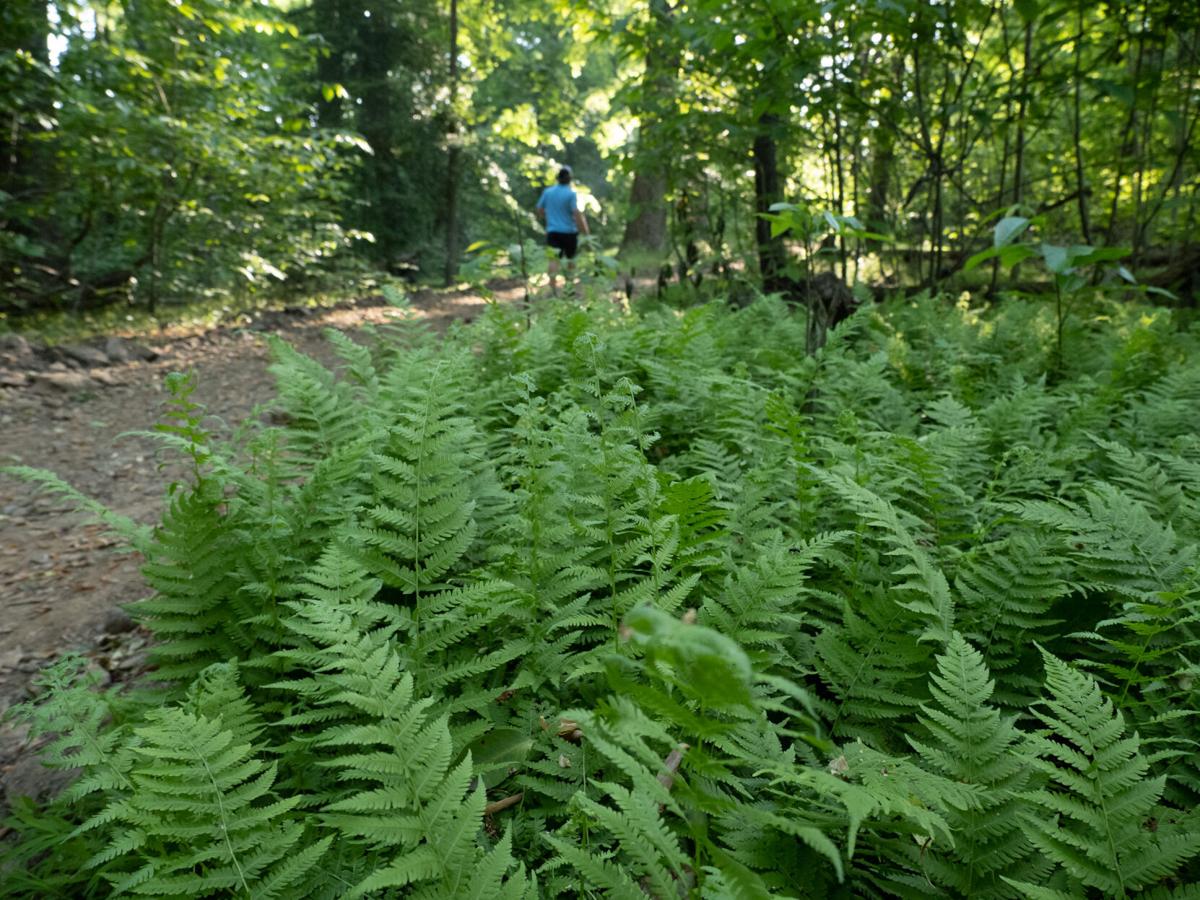 Ferns line a trail near the lighthouse at Elk Neck State Park in Maryland. 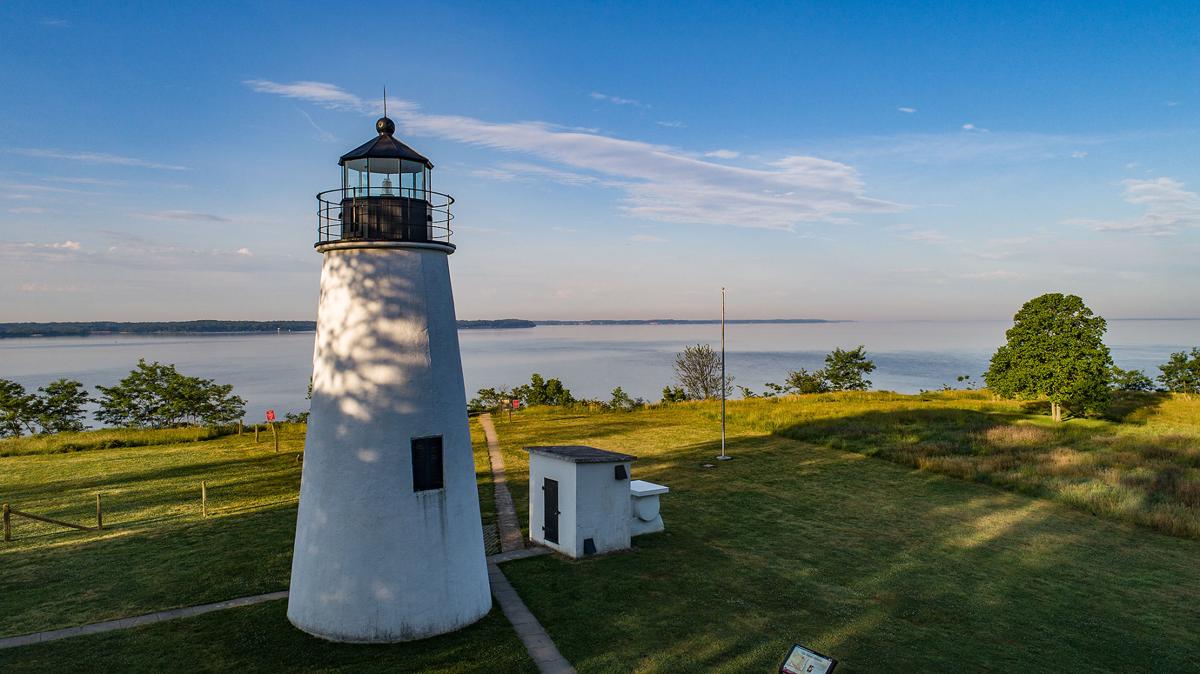 The still-functioning Turkey Point Lighthouse looms above the Chesapeake Bay on a 100-foot bluff at Elk Neck State Park in Maryland. 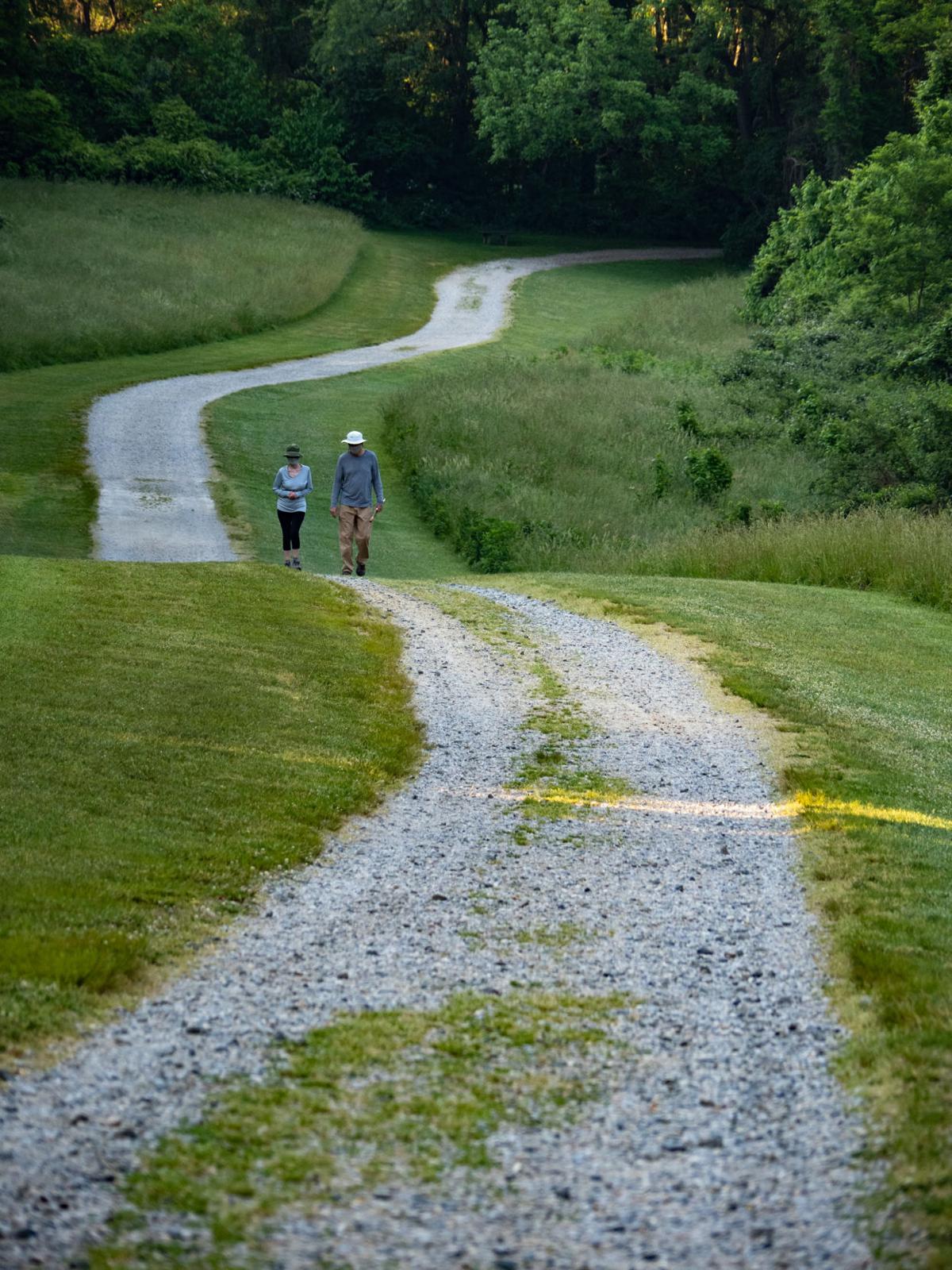 A gravel trail leads hikers a short distance from a parking lot to the tip of the peninsula at Elk Neck State Park in Maryland. 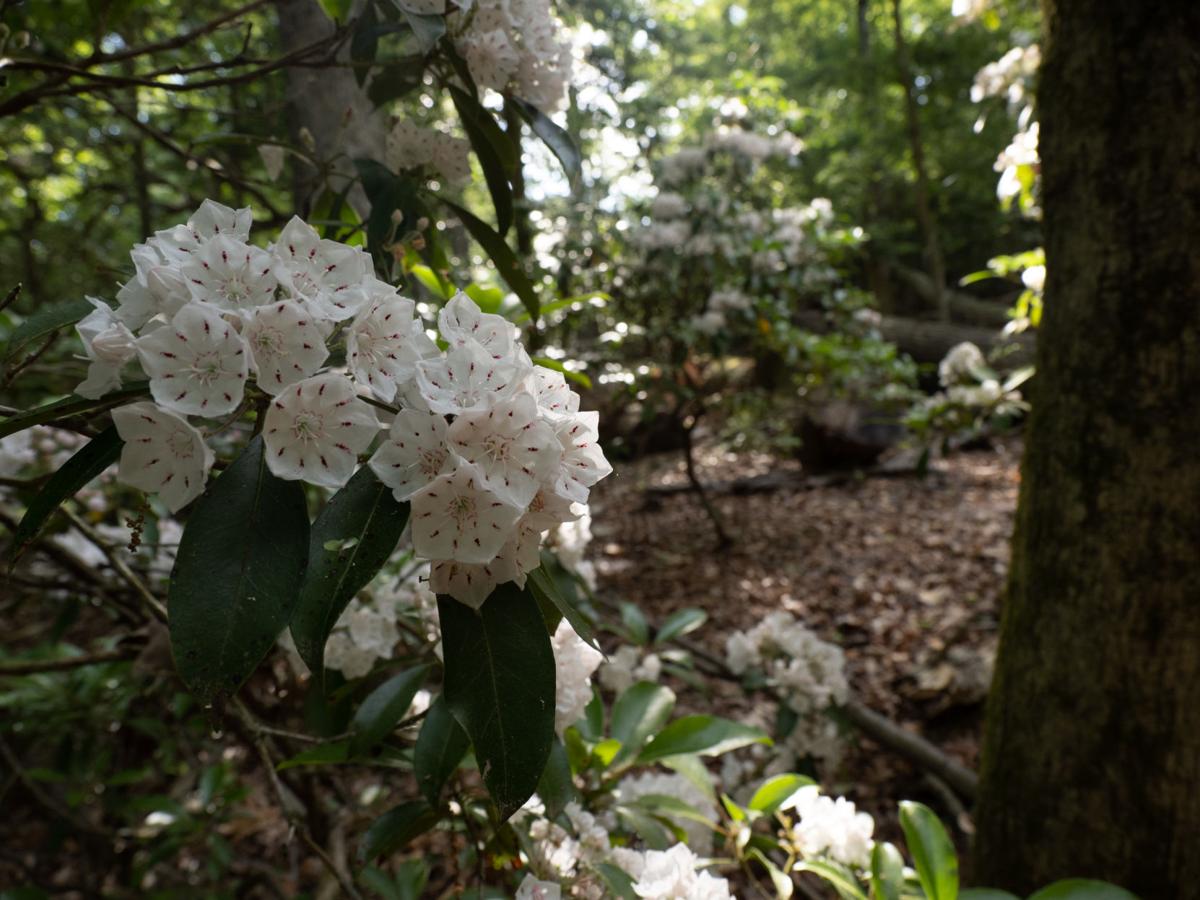 Mountain laurel bloom in the forest at Elk Neck State Park in Maryland. 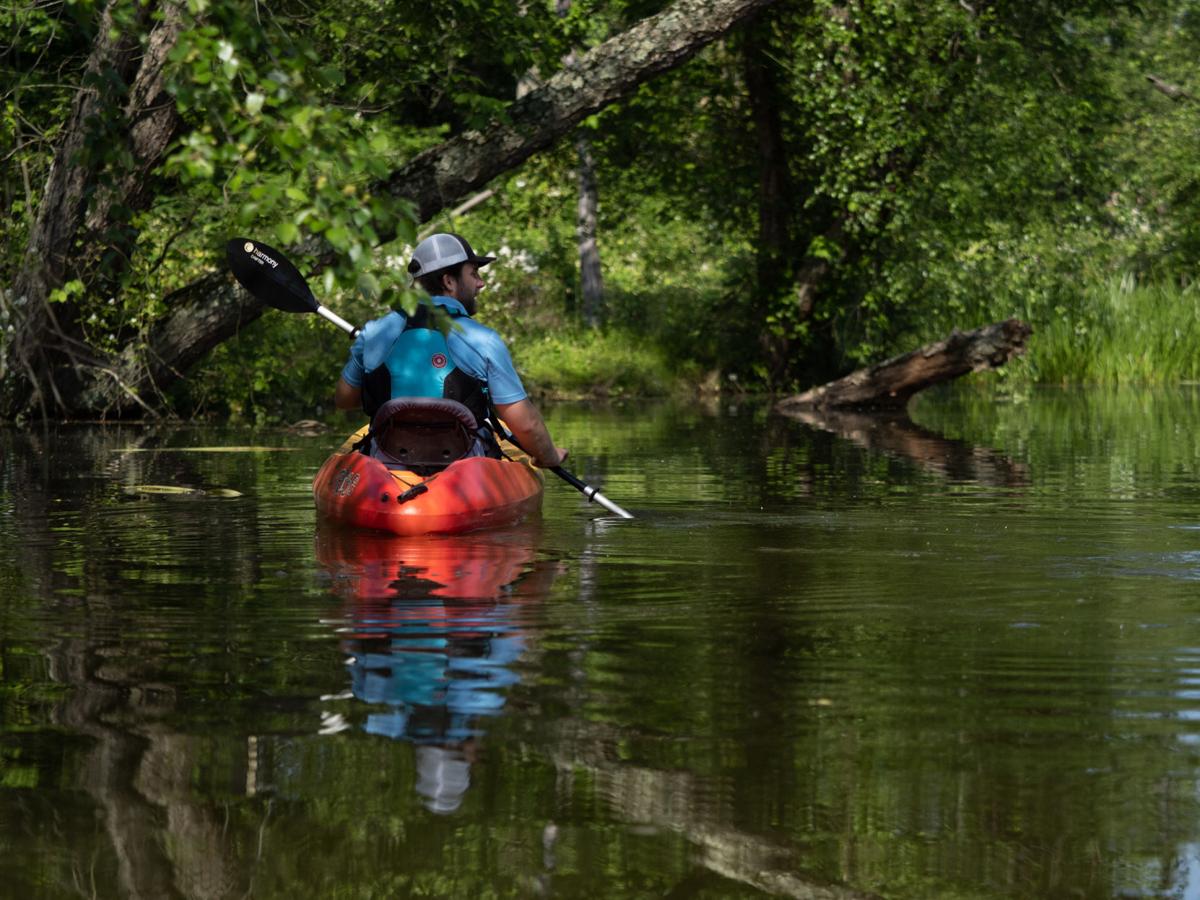 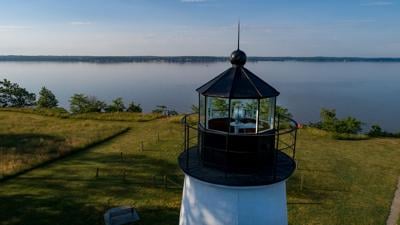 For an unparalleled view of the Chesapeake Bay, drive to the end of Maryland Route 272, leave your car in the gravel lot and hike down an old farm lane that gradually becomes engulfed in trees. Then step out into a final clearing containing an antique lighthouse and get as close to the edge of the 100-foot bluff as comfort and safety will allow.

Stand there for a moment. From left to right, the entire Upper Bay lies before you in one sweeping panorama: the reddish cliffs, the forested shoreline of Aberdeen Proving Ground, the jungle of underwater grass known as the Susquehanna Flats, the sandy beaches, the steep slopes guarding the mouth of the Susquehanna River, the marshes.

“It’s a beautiful viewshed of the headwaters of the Chesapeake Bay,” said Jeanette Thayer, an assistant park manager at Elk Neck State Park at the head of the Bay on Maryland’s Eastern Shore. “It is inspiring and captivating, and I’m always awestruck.”

If that sight was all the 2,300-acre state park had to offer, it would be enough to commend the trip. But it’s not.

Elk Neck could be considered a complete Chesapeake playground. There are beaches for sunbathing; walking trails for forest bathing; a marina for boating; a campground with some sites gussied up for glamping; and water on three sides for paddling.

“It has just about everything you’d want to do outside,” Thayer said.

Let’s not forget the pièce de résistance: the Turkey Point Lighthouse. The 35-foot tower stands nobly atop a cliff at the end of the 15-mile-long peninsula, making it a favorite among photographers.

Operated by a nonprofit called the Turkey Point Light Station, the lighthouse was built on the bluff to help ship captains change course into the mouth of the C&D Canal. A resident keeper tended the light until 1948; four of its 10 keepers were women.

The lighthouse normally is open to climbers 10 a.m.–2 p.m. on weekends May through October.

But I was greeted by a sheet of paper taped to the door that said it and the nearby gift shop were closed for the 2020 season to contain the spread of the coronavirus. It seemed a reasonable adaptation, given that the structure is fully enclosed and rife with tight squeezes.

The grassy area around the two buildings remains open, so visitors can still take in the spectacular view it affords.

My exploration of this peninsula on a sticky morning in June was separated into two experiences: a reconnaissance of the state park and a guided kayak tour of the upper reaches of the North East River, the waterway on the north side of the land mass. The peninsula is bounded on the south side by the Elk River. Both are tidal rivers that flow directly into the Bay.

The park encompasses most of the lower end of the peninsula, but not all of it. The eastern section comprises nearly 2,000 acres. Portions there have been a public park since 1939. The 300-acre western section, which includes the lighthouse, was added later.

If you prefer your nature to be in a perfectly pristine state, Elk Neck is probably not the park for you. Besides the encroachment of the housing development, there are the park amenities: more than 250 campsites, more than a dozen cabins, a park headquarters, various maintenance buildings and picnic pavilions.

The park can also get rather busy, especially during weekends and holidays between Memorial Day and Labor Day. Like many parks in the Chesapeake region, Elk Neck has seen a boost in traffic as people have begun emerging from coronavirus lockdowns. During the first week in June, nearly 30,000 people came into the park, about twice as many compared with the same week in 2019, Thayer said.

To avoid the crowds, she advises visiting during the cooler months, on weekdays or some time on either side of the 10 a.m.–3 p.m. rush.

My visit checked two of those boxes – it was on a Thursday and shortly after 7 a.m. when I pulled into the lighthouse parking lot. I followed the well-kept gravel trail to the lighthouse, my way scented by the ubiquitous white flowers of multiflora roses.

Sure, it’s a pesky invasive shrub, but for a few weeks in early summer, you almost don’t mind its presence.

For a more-rugged experience, take the trail that follows the shoreline heading north from the light house area. You will quickly find yourself enveloped by oaks, maple and pawpaw trees. The trail leads down to a sea-level clearing, a small crescent of a beach that is as close to a private hideaway as these parts can offer. Starting from the parking lot, the roundtrip is 1.5 miles.

The North East Beach Area in the eastern segment of the park is one of the premier spots in this part of the Bay for sunseekers. It features copious parking, restrooms with showers, picnic shelters and charcoal grills. For a more-secluded setting, stop by one of the several pull-offs along 272 and clamber down through a tunnel of trees until you dead-end at a sandy shoreline.

For the second part of my day, I drove 15 miles up the neck to the charming town of North East, population 3,600. Here, Bay Venture Outfitters rents kayaks and paddleboards along the narrow, uppermost segment of the North East River. I joined the proprietor, Kelly Benson, for a paddle into its marshy realm.

He led me into Stoney Run, a half-mile long stream bordered by an unbroken wall of greenery on either side. A beaver den was the only constructed edifice in sight. Blue herons glided above us. Carp gave an occasional heavy splash. At one point, my paddle alerted a river otter to my presence, and I caught a glimpse of its slick, brown fur as it disappeared in the murky water beside me.

All of this nature is to be found barely 2 miles away from Interstate 95. “It’s neat because you can be in town and in two minutes be here,” Benson said.

Just below Stoney Run, the river suddenly opens into a broad, bay-like spread. The going is rougher. But it’s worth plowing ahead, Benson said, to reach an area on the other side of a railway bridge that he calls “Hidden Marsh.” It’s an Instagram-ready cove where nature has somehow gained a tenuous foothold in an otherwise suburban landscape. (Benson will give you a map to help you find it.)

The pandemic has canceled or curtailed many types of social escapes. But with paddling, social-distancing is inherent in its design, making it a good outdoor option for groups, Benson said.

$60 to rent a Kayak for a day? Most float trips including transportation dont cost that much.

Great coverage of Elk Neck Park— we just reserved a campsite for October!