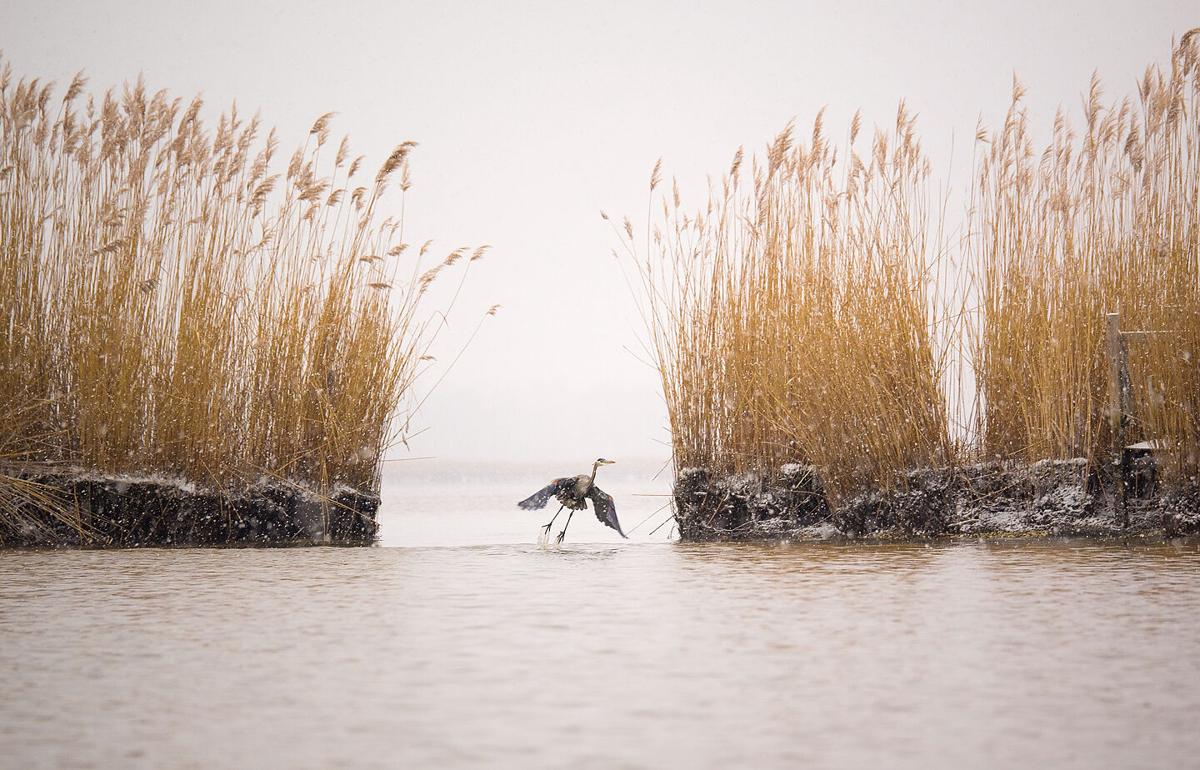 A great blue heron shoots the gap between two stands of phragmites along the shore of the upper Choptank River in Maryland. 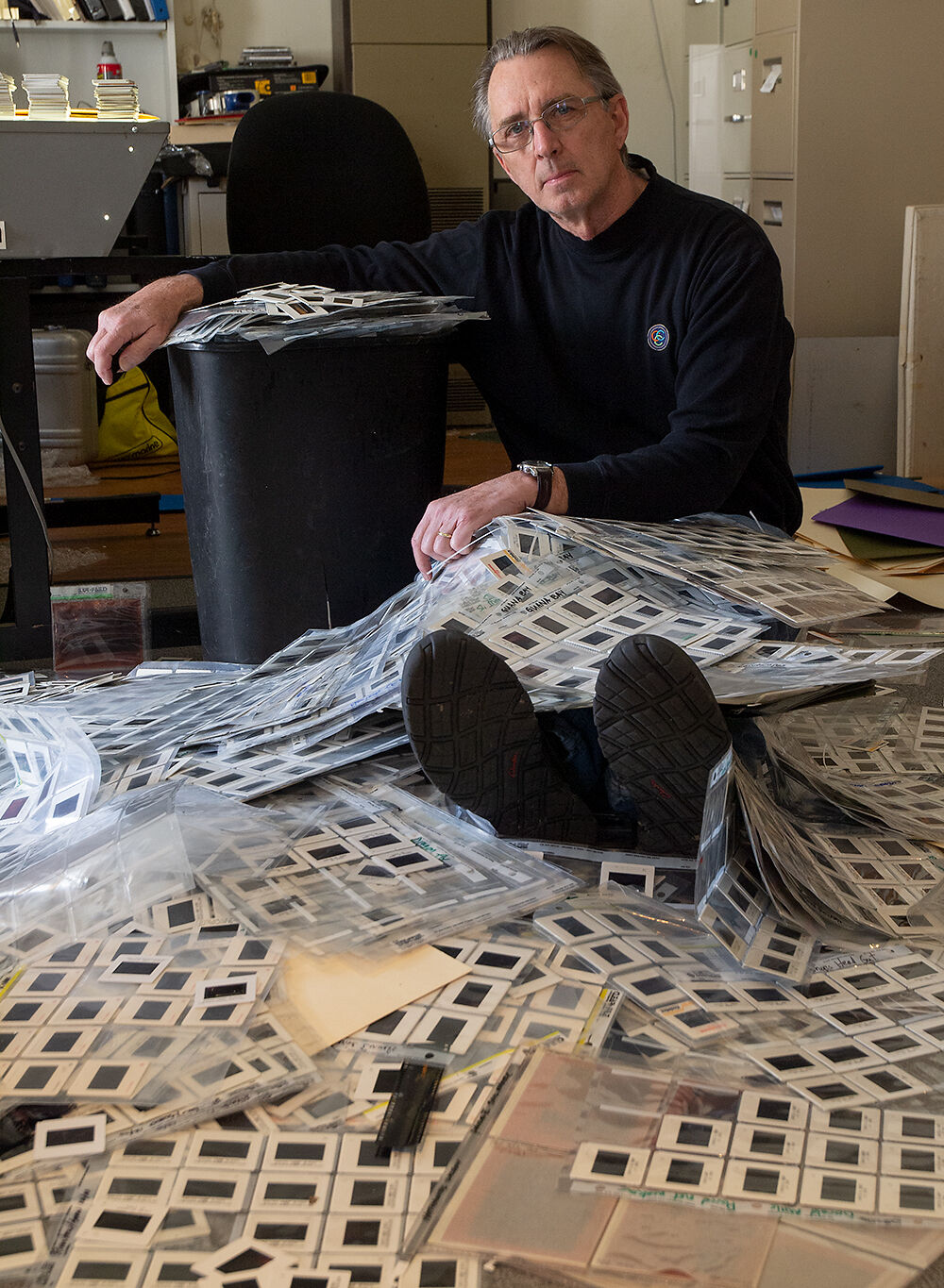 Photographer Dave Harp sorts through the enormous archive of slides that have accumulated during his career, much of which took place before digital photography became common. 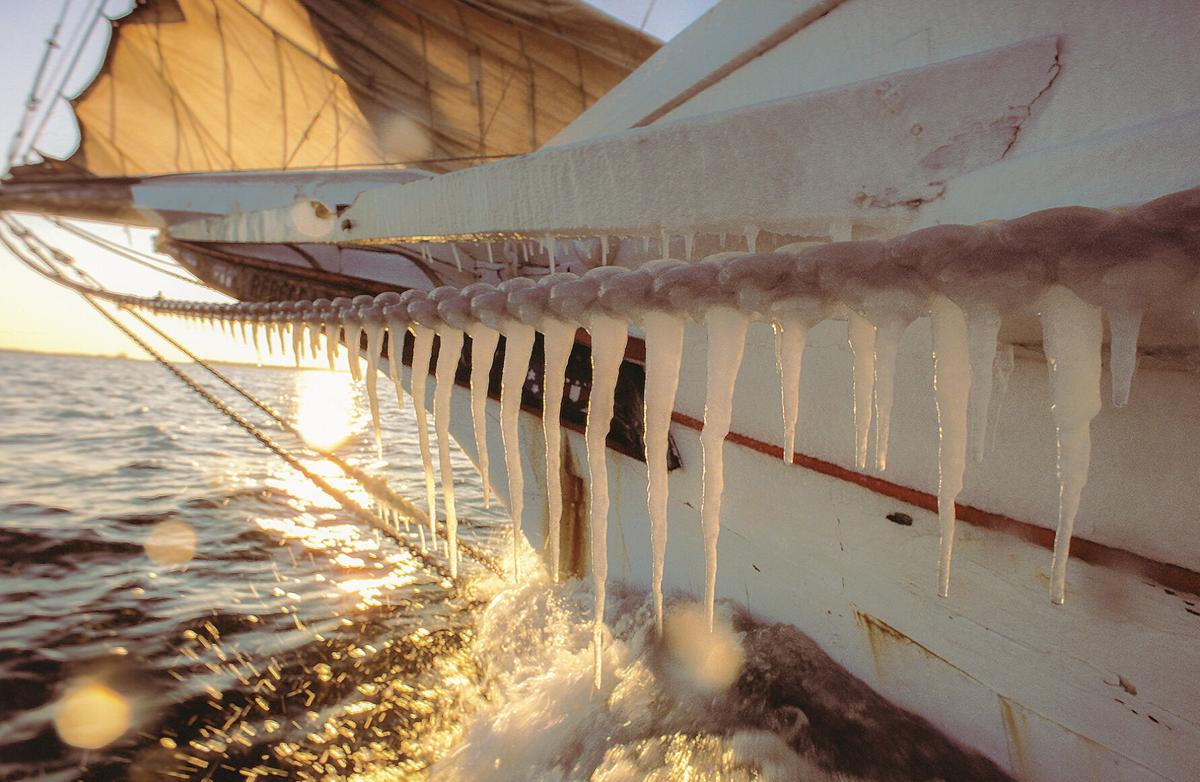 Icicles on the Rebecca T. Ruark catch a glint of sunshine as the well-known skipjack cruises the Choptank River. 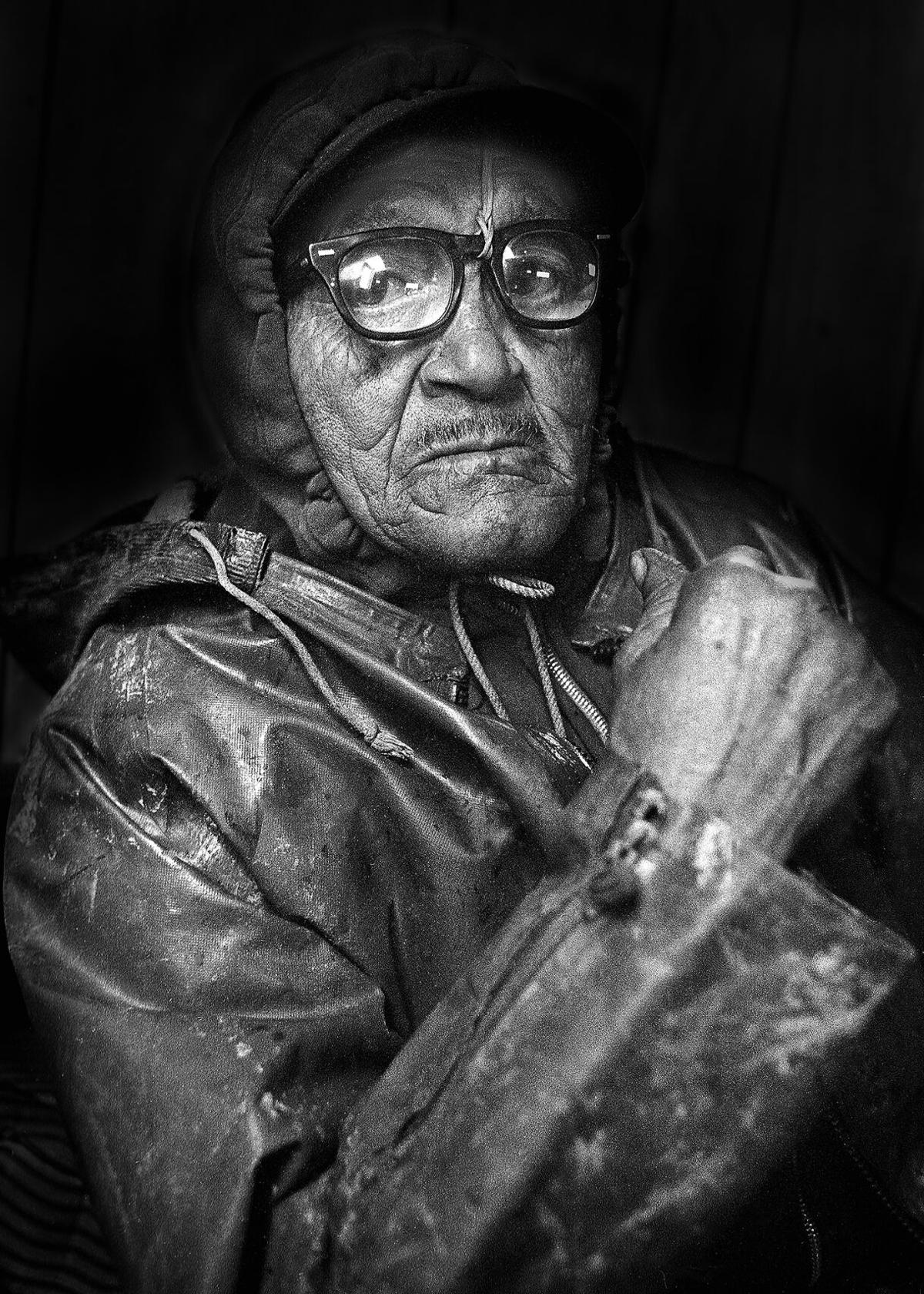 Louis Phillips, shown in 1976, was a deckhand on the skipjack Rebecca T. Ruark. 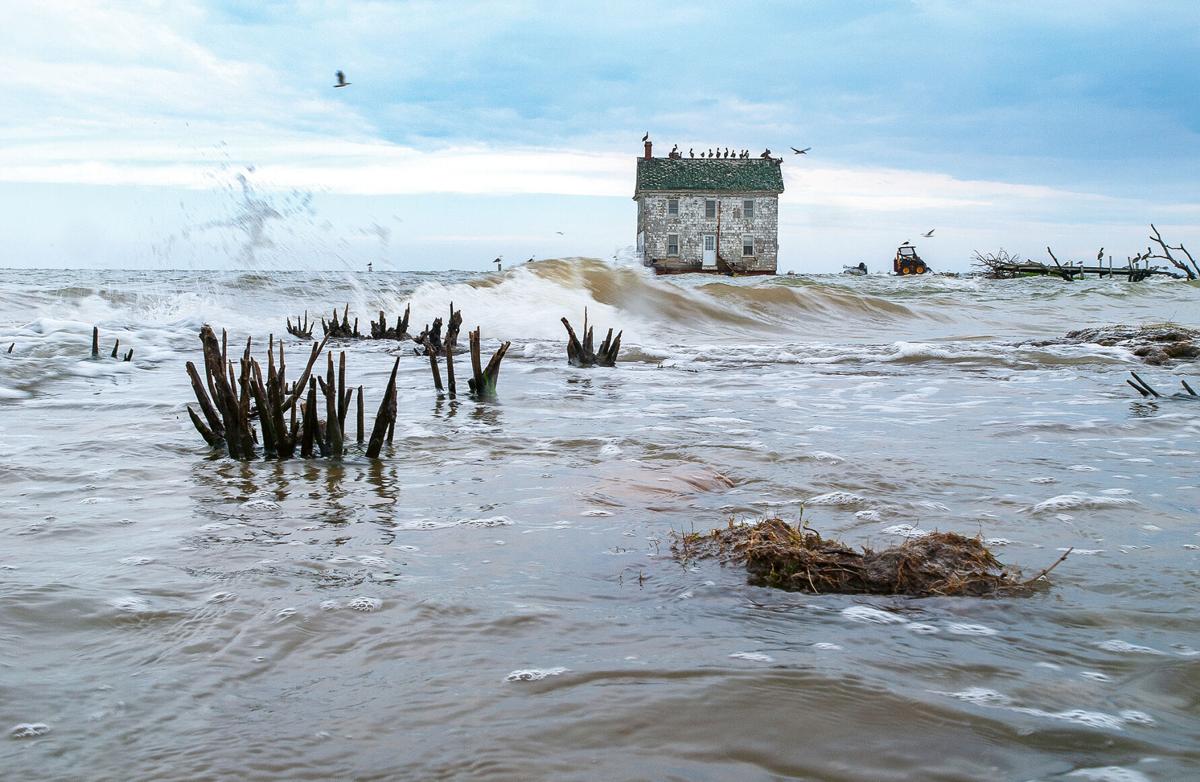 The last house on Holland Island in the Chesapeake Bay makes a final stand amidst hungry waves and the jagged remains of drowned vegetation.

Photographer Dave Harp has spent decades living life on the edge — of the Chesapeake Bay. Now, in the first exhibition to provide a retrospective look at his work, Harp’s photographs trace the beauty of Chesapeake shorelines over a span of 40 years. They also evoke an aching sense of change taking place in both the landscape and the people who inhabit it.

Where Land and Water Meet: The Chesapeake Bay Photography of David W. Harp is on view at the Chesapeake Bay Maritime Museum in St. Michaels, MD, until Sept. 20, 2021, and will be available for virtual visits on the museum’s website by mid to late October. While viewing the exhibition online won’t compare with seeing it in person, it’s a better option than missing it entirely.

“They are beautiful, compelling photos,” said chief curator Pete Lesher, “but they also have a message. They tell a story about a changing Bay.”

Harp worked closely with Lesher, associate curator Jenifer Dolde and exhibits specialist Jim Koerner to select images for the show and arrange an attractive and COVID-conscious display. They culled his enormous archives down to about 300 photos, from which they chose approximately 60 as framed pieces and another 60 for a looping slide show.

To promote a safe viewing experience, the wall-mounted photos are spaced a bit farther apart than would have been the case before COVID-19 arrived. Visitors must also wear masks. An interactive kiosk with trailers from Bay Journal films, created by Harp, Tom Horton and Sandy Cannon-Brown, provides touch-free operations — you select from the menu by waving your hand across a beam of light.

The theme of Chesapeake shorelines, especially the marshy ones, has been Harp’s passion since the 1980s. “So much of life in the Bay is on the edges,” he said. “It’s where the abundance of life is, whether it’s grasses or butterflies or otters. That’s where I like to be. It’s in the marsh where I’m happiest.”

Most of the photographs in the exhibition are in full color, taken from both film and digital formats. But a 9-minute slide show highlights black and white images taken during two weeks in 1976 on a skipjack. They are striking images, including portraits of African American and White watermen, their ships and grueling workdays; many will be seen by the public for the first time. They also document the lost era of working skipjacks.

As Harp looks at the array of images in the two-story gallery, he sees many other scenes that have changed dramatically or no longer exist: islands that have eroded away, grand trees that collapsed into the water and stalwart residents of Bay communities who have passed away. In one underwater image, fish swim across an old gravestone in the Honga River that was pulled down by rising water.

“Dave is at a point when he’s reflecting on his career in what is arguably a pivotal time for the Bay,” Lesher said.

And despite the untold hours Harp has spent with the Bay and with his photos, the exhibition gives him a new sense of the story his work tells. “It’s an emotional thing to see all of this in one place,” he said. “I’ve never had this perspective before. I want my grandchildren to see it.”

Coupons for a camera

A very young Dave Harp got his start in photography from butter boxes. In the 1950s, he collected coupons printed on butter packages that could be exchanged for different items — and Harp used them to get his first (plastic) camera. His father, Joe Harp, was the likely inspiration.

“My father was a word guy, a newspaper writer and editor, but he was also an avid, obsessive photographer,” Harp said. “So I guess that was the influence that probably got me started.”

The senior Harp was editor of the Hagerstown Morning Herald in Western Maryland. As a teen, Harp began helping out in the newsroom. There, he learned about composition, film and processing from news photographer David Cottingham.

At high school, Harp set up “a lovely little darkroom” and served as photographer for the school newspaper and yearbook.

On Nov. 22, 1963, when John F. Kennedy was assassinated, Harp left school midday and headed for the newsroom. He spent the afternoon developing photos that arrived by way of the Associated Press machine and running them to the news desk. Harp said he felt like a part of history. And the experience sealed his interest in photojournalism.

After graduating from Ohio University, Harp got a job at the Morning Herald while his father moved on to become editor of the evening edition. He later took on some work at the Sun in Baltimore and was offered the position of photographer for the Sunday Sun Magazine in 1980.

“It was a dream job,” he said, providing the chance to photograph lots of stories at home and abroad. His work there included the skipjack assignment, which resulted in several images for the magazine and the larger collection of images now on display at the Maritime Museum.

Harp’s time at the Sun also introduced him to reporter Tom Horton, whom Harp calls his “work husband.” They began covering the Chesapeake Bay together and have remained in cahoots for decades, collaborating on news articles, columns, books and films about the Chesapeake Bay.

“Dave’s taught me how to see, to appreciate the nuances of light and to embrace dawn and dusk and ignore noon,” Horton said.

After leaving the Sun, Harp launched his own photography business and took on a variety of projects. But he returned to a full focus on his outdoor passions when he went to work for the Chesapeake Bay Journal in 2009, and is still on the staff today.

Harp continues to describe himself as a photojournalist or documentary photographer rather than an artist. But the artistry emanating from the Maritime Museum’s walls can’t be denied.

And he prefers, often without success, to emphasize the images rather than talk about his own role in creating them.

“That’s the artist mindset,” said the museum’s Dolde. “Artists think more about getting their work out there, and not about themselves.”

She noted that Harp is very articulate about his work. “He has a very strong sense of his mission and his method,” she said.

“Every image [in the exhibition] has a story,” Dolde said. “There’s the literal story, which you can hear from Dave in the captions, and the story you can find in the image personally.”

There are also stories that Harp carries with him from years of intimate moments with the landscape and its people. “Every photo reminds me of an experience,” he said, and the body of work he has produced serves as a kind of family album of memories.

One of his favorite images centers on an old barn in a marsh on Chicone Creek on the Eastern Shore, its wooden white sides pairing with the mist that curls around it. The gold tones of early light on the marsh plants give it a glow of serenity. Yet Harp’s memory of the moment is a little less serene.

“I almost lost my life taking that one,” Harp said, only half joking. “I was standing pushed against the railing of a Route 50 bridge, and the tractor trailers were whipping past in what felt like inches from my head.”

In another image, a group of workboats are tussling in surprisingly close proximity on a churning Bay, its surface nearly midnight blue, etched by choppy waves.

“I was literally throwing up trying to shoot that,” Harp said.

More recently, he traveled by kayak to snag shots of a shoreline scene on the Choptank River where a cute otter rose above the surface to watch him. That pair of photos cost Harp two bloody arms and a trip to the doctor’s office: The otter swam up and bit one forearm as he paddled, then shot under the kayak to come up and bite the other one.

The adventure ended with a series of tetanus and rabies shots, but Harp recovered quickly and added the story to his compendium.

You won’t find those stories in captions, but you might hear some of them during an online series of talks the museum is hosting to further highlight Harp’s work. They take place on Oct. 7, Nov. 4 and Dec. 9. For information about registration and fees, visit cbmm.org/HarpArtistSeries.

Regarding his own work, Harp is clear about the takeaway message he hopes is in all of his photos. “This is the beauty of what we have and what we stand to lose,” he said. “We really do need to pay attention.”

Where Land & Water Meet: The Chesapeake Bay Photography of David W. Harp is an exhibition at the Chesapeake Bay Maritime Museum in St. Michaels, MD, on the Bay’s Eastern Shore. You can view the exhibit online or in person through Sept. 20, 2021. The virtual exhibit will be available at cbmm.org starting in mid– to late-October. Access to the exhibition gallery is included with admission to the museum’s waterfront campus.

Admission: $14 for adults, $11 for seniors. Other discounts apply for children, college students and retired military personnel. Admission is free for museum members, active military personnel, and children ages 5 and younger.