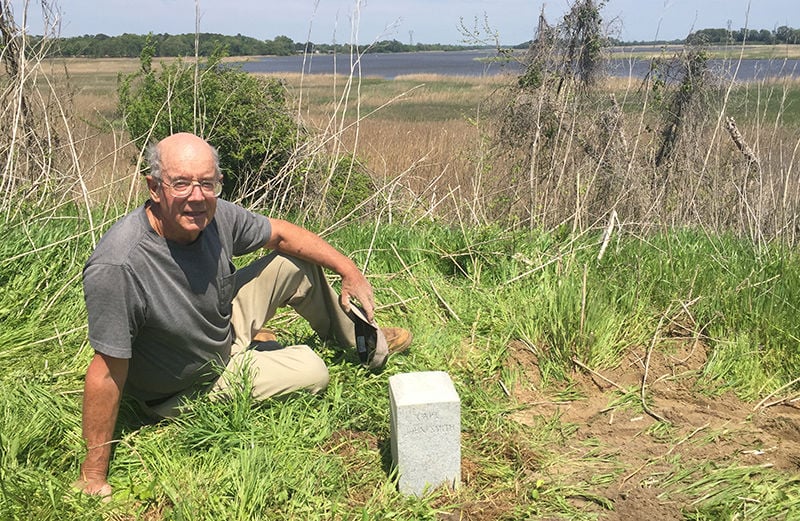 Granite markers have been installed at 11 of the 24 sites where Capt. John Smith placed Maltese crosses during his exploration of the Chesapeake region from 1607-09. Here, historian Ed Haile sits by a modern marker, placed to near the 13th tee of the Nansemond River Golf Club, overlooking the Nansemond River in Suffolk, VA. (Connie Lapallo) 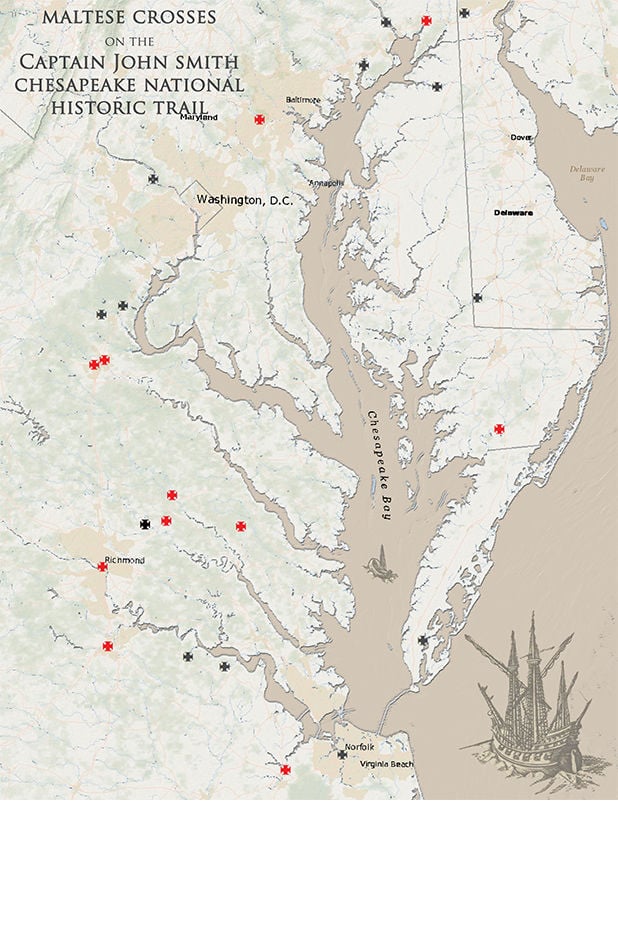 Red crosses on this map show where 11 modern granite markers have been placed as an echo the original cross markers that John Smith placed around the Chesapeake region from 1607-1609. Black crosses indicated proposed sites. (Chesapeake Conservancy) A granite stone nestled among the leaves marks the approximate location along the Mattaponi River where John Smith placed a Maltese cross marker in 1607. The site is now part of Zoar State Forest in King William County, VA. (Connie Lapallo) 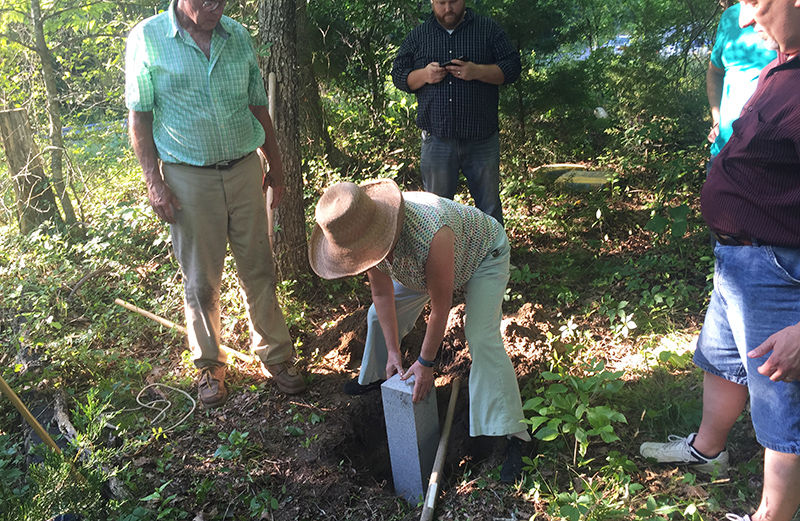 Granite markers have been installed at 11 of the 24 sites where Capt. John Smith placed Maltese crosses during his exploration of the Chesapeake region from 1607-09. Here, historian Ed Haile sits by a modern marker, placed to near the 13th tee of the Nansemond River Golf Club, overlooking the Nansemond River in Suffolk, VA. (Connie Lapallo)

Red crosses on this map show where 11 modern granite markers have been placed as an echo the original cross markers that John Smith placed around the Chesapeake region from 1607-1609. Black crosses indicated proposed sites. (Chesapeake Conservancy)

A granite stone nestled among the leaves marks the approximate location along the Mattaponi River where John Smith placed a Maltese cross marker in 1607. The site is now part of Zoar State Forest in King William County, VA. (Connie Lapallo)

Ed Haile and Connie Lapallo, authors and historians who specialize in English explorer John Smith and the colonial settlement at Jamestown, VA, are following in Smith’s footsteps. Where Smith traveled with American Indian guides and a few fellow colonists, Haile and Lapallo arrive with concrete mix, a heavy granite marker and a water pail.

They are visiting 24 sites — as precisely as possible — where Smith marked the extent of his explorations with a Maltese cross. And they are replacing those lost markers with new ones. Eleven have been installed so far, with eight in Virginia and three in Maryland. Delaware will join the list soon.

“I like to think of it as restoring John Smith’s waypoints around the Chesapeake Bay,” Haile said.

The cross marker project, funded by the Chesapeake Conservancy and volunteer contributions, will add another feature to the Captain John Smith Chesapeake National Historic Trail, which celebrated its 10th anniversary in December 2016.

“Just like the Appalachian Trail has a starting point and an end point to it, maybe these markers can create a route that people would like to follow and ‘collect’ all 24,” Haile said.

Smith explored the Bay and its rivers between 1607 and 1609, working from the newly established James Fort (later called Jamestown). He traveled through woods and waters that were largely unmapped but well-populated by American Indian communities living near the shorelines.

Smith marked the extent of his travels at 24 sites with a Maltese cross — thick, crossed lines of equal size that flare at the end — to indicate his farthest upstream point on various waterways. He didn’t mark every river or creek that he traveled but those that he marked were branded with a small brass cross affixed to a tree or, in some cases, the symbol carved into bark.

Those physical markers correspond to crosses on Smith’s 1612 map, where modern eyes could mistake them for treasure marks. “To the crosses hath been discovered,” Smith wrote. “What [is] beyond is by relation.”

Haile hopes the project will encourage a unifying view of the Chesapeake watershed. “I’d like to see it erase state lines when we think about the Bay,” Haile said. “To think of it as one unit like John Smith did could be very helpful when we’re talking about the ecological health of the Bay.”

Smith faced challenges as he worked his way across the landscape. Haile and Lapallo do, too. Their mission has been an exercise in history, imagination and patience.

Haile, author of John Smith in the Chesapeake and Jamestown Narratives, has been interested in the marker locations for decades. Around 2008, former Chesapeake Conservancy chairman Charlie Stek encouraged him to pinpoint the locations with GPS coordinates.

If Smith had been able to record such coordinates, it would have happened quickly.

Instead, Haile delved into Smith’s writings that described the marker locations, with some passages offering more detail than others. Haile, with background as a professional land surveyor, began covering lots of terrain on foot, comparing Smith’s writings and map to the modern landscape with its various transformations.

He spoke to landowners — remarkably, most of the marker sites are on public land — and consulted with archeologist Wayne Clark.

“It required a lot of scouting, but it was a labor of love,” Haile said. “I drove around everywhere.”

Haile sorted through historic and topographic information, but the effort to install new markers failed to take wing. Then, in 2015, Haile contacted Lapallo, author of a trilogy about life in early Jamestown beginning with Dark Enough to See the Stars in a Jamestown Sky. Lapallo, who was working on her third book at the time, put aside reluctance for new projects.

“Ed was so sincere and hopeful and had such great research behind it that I just couldn’t say no,” Lapallo said. “I’ve been to a lot of locations for my research but the thought of retracing these steps with someone who knows Smith so well was a real honor. And it’s been a thrill.”

They revived contacts with landowners and introduced the project in places where parcels have changed hands. Their reception from both public and private landowners has been overwhelmingly positive.

“At one site, we knocked on the homeowners’ door and said, ‘John Smith came here,’ ” Lapallo said. “It sounds bizarre, but that’s what we did. And those folks were so pleased and honored.”

Installing markers on private land has been easiest, unburdened by the rounds of administrative permission required for public sites.  All 11 of the installed markers are accessible to visitors. A few proposed sites have access concerns because of security or safety issues, but discussions continue.

“We’ve learned that Captain Smith has a lot of fans. People will do for him what they might not do for other historical folks. There are people that just love him,” Lapallo said.

Among the sites are a city park in Richmond, a golf course on the Nansemond River and Virginia’s Zoar State Forest on the Mattaponi River. The newest marker is at Patapsco Valley State Park in Maryland, installed on Dec. 19 to commemorate the 10th anniversary of the Smith Trail.

“The cross marker project is a chance to connect people to history in their own collective backyard,” said Joel Dunn, president and CEO of the Chesapeake Conservancy. “These markers bring the history of Captain Smith’s explorations to life, and we are deeply appreciative to all of the property owners who have permitted us to place a marker on their property or public land.”

The goal is to mark all 24 of the original sites: two in Delaware, seven in Maryland, and 15 in Virginia.

The marker itself is a small, upright rectangular stone, provided with assistance from Everlasting Granite in George and A.P. Grappone & Sons of Richmond. A Maltese cross is engraved on its gently peaked cap. A date on one side of the stone reflects the year Smith placed his marker at the site. Smith’s quote, “To the cross hath been discovered…,” graces the opposite side.

Some installations are supported with local volunteers and publicity. Others are a quiet, two-person job. “Ed carries the granite maker and I carry the hoe and the concrete mix and the water pail,” Lapallo said. “It’s not very glamorous when you’re covered in Sakrete, dirt and mud.”

Haile is confident that many of the contemporary markers are “spot on” with the original locations, especially where geography corresponds with Smith’s descriptions. Among them are two sites on Virginia’s Rappahannock River and another at the fork of Northeast Creek and Little Northeast Creek in Maryland.

Careful analysis of proposed sites continues, and the process has altered plans for one new marker in Virginia. “What we thought would be on the Elizabeth River ended up being on the Lafayette River,” Haile said. “There are very sketchy details in Smith’s journal, but a careful reading of the length of the estuary and what was found at the end made it the Lafayette.”

Historic accuracy is the top priority for marker locations. As a result, some are easier to access than others, but none pose enormous difficulties.

“In almost no case is there any concession to accessibility,” Haile said. “If we know where the cross was, short of putting it in the southbound lane of I-95, we are going to put it there. Only in some cases, where it’s less clear, would we think about siting it in a way so that we don’t make finding it any more difficult.”

The Chesapeake Conservancy lists GPS coordinates for each of the markers on their website.

The coordinates for the marker locations are very precise, accurate within feet, but no detailed guide is available for finding them. Selecting your approach will take some tactical analysis.

Some are a short walk from nearby parking. If you like to paddle — and further immerse yourself in the Smith Trail experience — you could approach some markers by water, followed by a walk of varying lengths.

“The intent is not to put a parking lot and a placard by these things,” Haile said. “The challenge is to experience a little of what John Smith experienced himself. You don’t know exactly where everything is or what’s around the next bend. I think it will be a big appeal.”