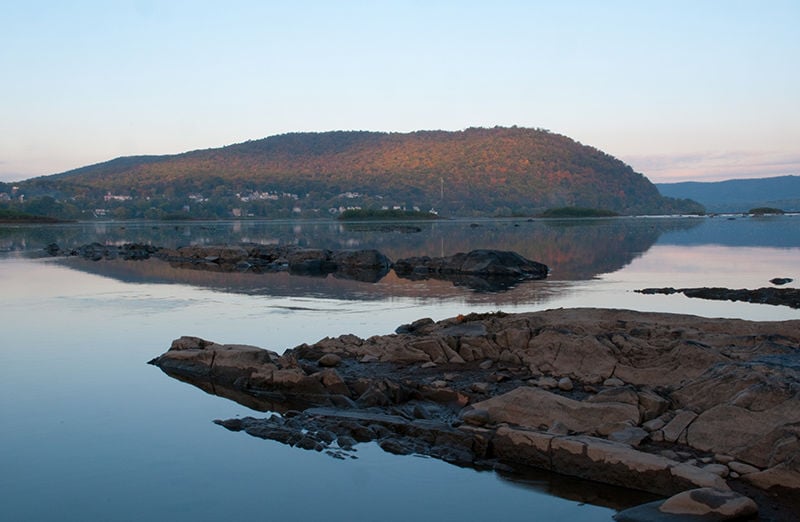 Cove Mountain, viewed from across the Susquehanna River just north of Harrisburg, is lit in autumn splendor. (George Gress) 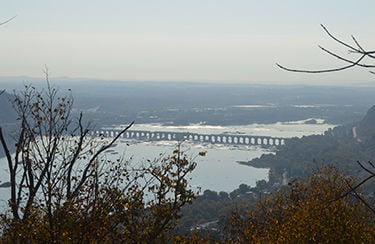 The historic Rockville Bridge spans nearly a mile across the Susquehanna River in this view from a trail through the Cove Mountain Preserve. (Shawn Hickey, The Nature Conservancy) 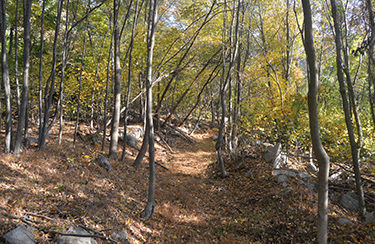 This trail is one of two that were groomed from former logging roads on the newly opened Cove Mountain Preserve.(Shawn Hickey, The Nature Conservancy)

From a distance, Cove Mountain looks like it floats on the Susquehanna River. Closer up, it’s a typical Pennsylvania red oak-dominated forest, with scattered lichen and moss-covered boulders, clear mountain streams and clearings well-stocked with wildflowers.

This unspoiled wilderness is also one of the largest plots of undeveloped mountain land just outside of Harrisburg and, as such, has been eyed by developers for years.

Construction of a 500-home development, a bedroom community to Harrisburg, has begun on one side of Cove Mountain; the other side is now a preserve owned by The Nature Conservancy. The conservancy purchased the 353-acre parcel in February 2017 and opened it to the public in September.

“It took us a little while to raise the funds — the rest is history,” said program director Josh Parrish of the conservancy’s Pennsylvania office. “It’s great that it will continue to grow trees and not vinyl siding.”

The conservancy was able to protect the property with the help of local partner organizations, as well as the Pennsylvania Department of Conservation and Natural Resources, which provided a grant to match private donations.

The slopes of the preserve are a refuge from city life for both creatures and humans, including the threatened Allegheny woodrat and cerulean warbler. Parking and trailheads are at the Wesley United Methodist Church in Marysville, a small town about 2 miles north of Harrisburg on the west shore of the Susquehanna River.

The staff has groomed two trails on former logging roads — now the Red Trail and the Yellow Trail — each about a mile long. Signs have been erected, and a trail camera catches images of wildlife. So far, it has captured a woodrat, porcupine and a rear view of the ubiquitous white-tailed deer. Migrating songbirds and butterflies pass through, including the Baltimore oriole, various hawks and eagles, and the Eastern tiger butterfly.

More trails are planned, but for now the existing trails offer a good afternoon of mostly uphill hiking with a rewarding view on top. Both trails are steep but short, with no tricky rock climbs or hazards, and ranked as beginner-friendly. Each vigorous trek leads to an expansive view of the Susquehanna River — which is not directly accessible from the preserve.

One overlook includes the historic Rockville Bridge, said to be the longest stone masonry railroad bridge in the world. The bridge, built in 1902, stretches across the river for nearly a mile. Pawpaw trees along the trails, when in season, could offer a refreshing snack if the Allegheny woodrat leaves some to spare.

About a quarter of the way up the Red Trail, you pass the dry, stony stream bed where the Peek-a-Boo Creek flows when it shows itself. The Peek-a-Boo is the local name given to this ground spring because it pops up to the surface, then disappears — it’s one of the clean, clear mountain springs that supply water to larger nearby streams, like Cove Creek and the Conodoguinet Creek, as well as charge the groundwater that feeds many local wells. Just past the creek bed, a grove of pawpaw trees is thick enough to form a canopy reaching across the trail to touch one another’s leaves.

Cove Mountain Preserve is the site of a water gap — created by the river as it cuts through the ridge. It’s one of five water gaps in the area, all of which are National Natural Landmarks.

Cove Mountain is also part of the Kittatinny Ridge, a 185-mile chain of mountains and a literal lifeline for plants and animals running from the Catskills to the Maxon-Dixon Line. Its large, linear forests are a vital corridor for wildlife, and the ridge is a globally important part of the Atlantic Flyway, used by raptors and songbirds migrating between southern climes and the Northeast.

“The Kittatinny Ridge is the first prominent landscape feature you encounter as you travel north or west from Philadelphia, and it marks the entrance to Pennsylvania’s Ridge and Valley region,” said Lauren Imgrund, Deputy Secretary of Conservation for the DCNR. “It is one of the commonwealth’s most treasured landscapes, and it provides the backdrop to life in 11 counties.”

The Cove Mountain Preserve is the first parcel that The Nature Conservancy has preserved on the ridge in central Pennsylvania, although other organizations have purchased or placed conservation easements on other parcels in the area. The conservancy has helped to preserve properties elsewhere on the ridge, including parts of the Cherry Valley National Wildlife Refuge in the Poconos region.

Jeanne Ortiz, landscape conservation program manager for Audubon Pennsylvania, said that Cove Mountain ranked high in an analysis of private landholdings on Kittatinny Ridge because it’s home to threatened species and considered a resilient landscape. Like the ridge it belongs to, Cove Mountain has so many changes in geology and elevation that it supports diverse habitat; the diversity provides resilience to the impacts of climate change.

“Cove Mountain is really important because it’s a large forested property,” Ortiz said “It’s a link in the chain of permanently protected land on the ridge.”

Climb Cove Mountain and take in the view