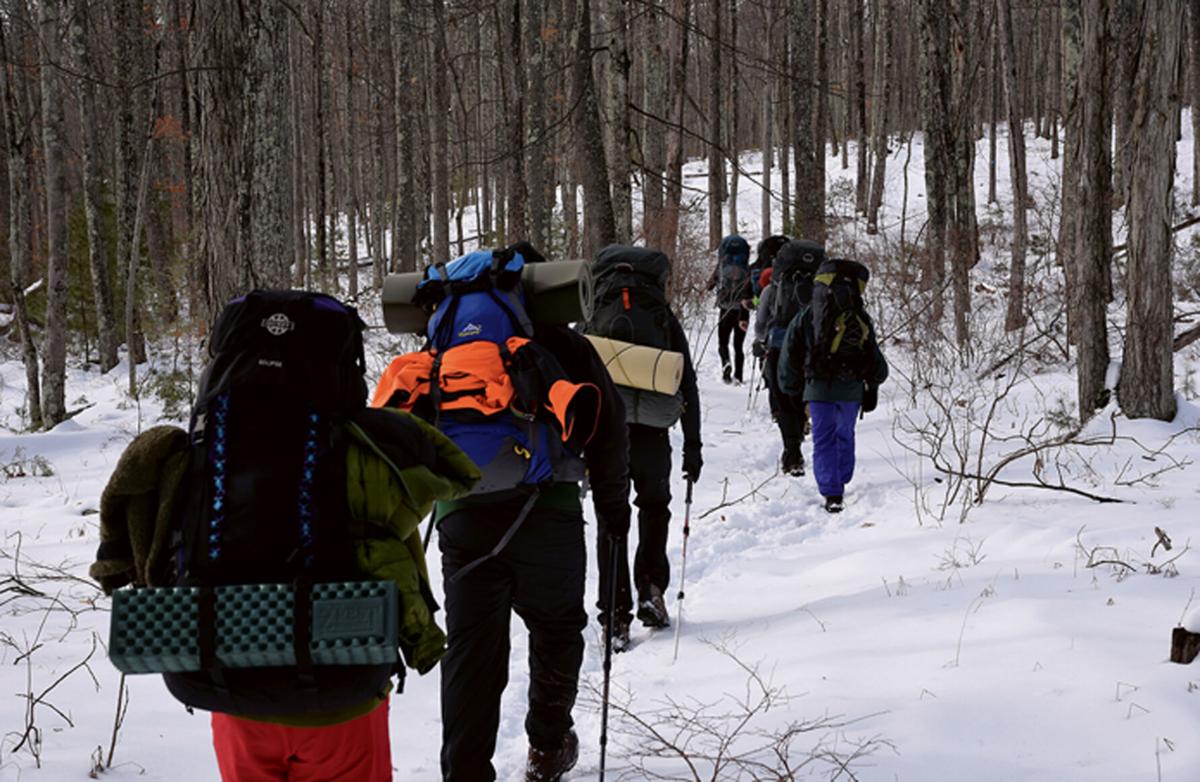 Backpackers head into the Pennsylvania woods. 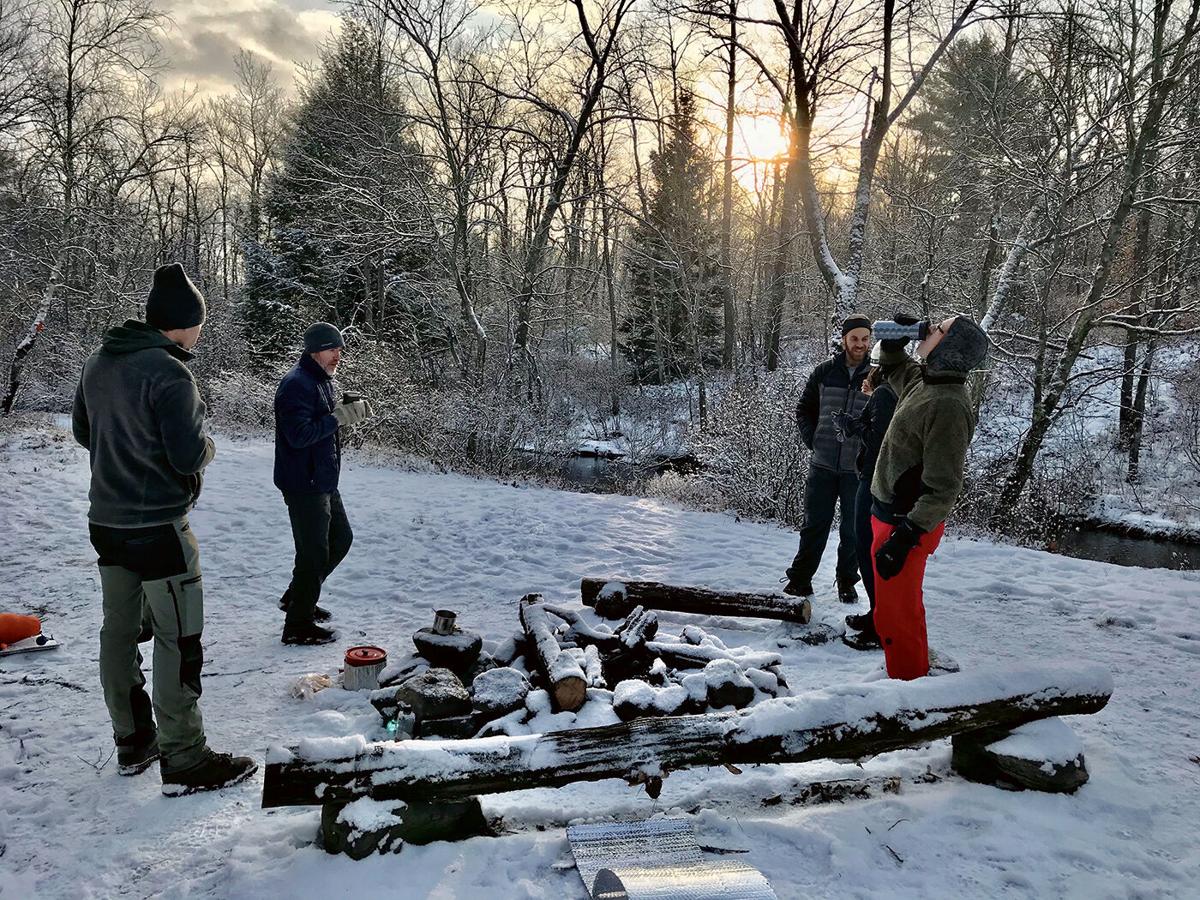 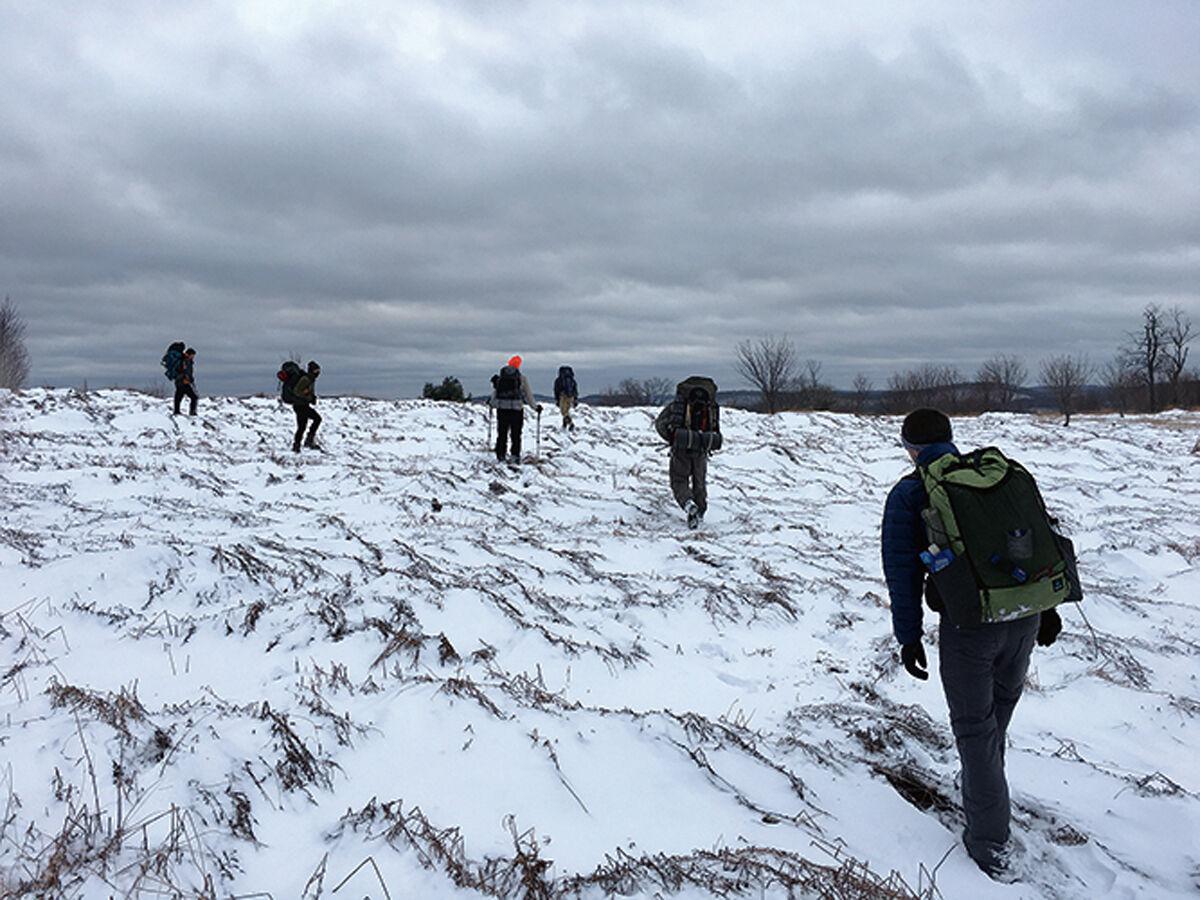 For 21 years, I have led an overnight backpacking excursion to a different wild spot in Pennsylvania on a cold, preferably snowy, winter weekend.

We don’t do it to prove our mettle but to immerse ourselves in a landscape of sights, sounds and light experienced no other time of year. It’s also an antidote to Seasonal Affective Disorder.

Nearly each year, several people who join the trip are hiking and camping during winter for the first time. Sometimes overcoming a lifetime of trepidation, they are thrilled to learn that being outdoors when it’s freezing can be quite comfortable as long as they are wearing appropriate layers of clothing and bring the right gear.

We also make a robust fire a linchpin of our experience. Warming up by a crackling fire on a crisp winter night with stars twinkling through the bare branches is one of life’s great experiences.

What’s so special about being outdoors in winter? Let’s count the ways.

Gone are the mosquitoes, ticks, poison ivy, sunburn and other nuisances of hiking and camping in warm weather.

With foliage gone, the landscape opens up. A forest shows itself in stark silhouettes, a matrix of limb patterns that creak and moan in the wind.

Vistas expand and, with lower humidity, the views are crisper and reach farther. Stargazing is never better than on a crystal-clear winter night.

Wildlife is easier to see and sometimes track in the snow. We once deciphered the wanderings of a coyote that eventually leaped into the air and pounced on a vole in the snow. We marveled at a porcupine surprised while munching on catkins in a beech tree, and we were startled by a ruffed grouse exploding out of a snow drift. Migratory birds you won’t see in other seasons are around, too.

Some of the most popular trails in the Chesapeake Bay region are downright crowded in warm months — and have been even more so during the pandemic. In winter, you may not see another soul.

Then, there is the soft winter light on the landscape. You welcome its touch on rosy cheeks.

Unique to winter are sights and sounds: hoarfrost sparkling on plants, bobbing icicles in a stream, frozen waterfalls, the muffled crunch of boots on snow, and small avalanches of wispy snow that dust your neck when your pack brushes an overhead limb.

The quiet contrasts starkly with the buzzing and chirping of wildlife and stirring foliage of other seasons.

The stillness invites introspection. Fletcher remembers the time he hiked alone on the Appalachian Trail to a shelter where it snowed softly during the night.

“Just having that moment and time for reflections. It was a perfect antidote for the work stress I was going through.”

A fire is a just reward — some might say a necessity — after a full day of winter hiking. The first thing our backpacking group does after picking out a campsite for the night is to gather enough wood to keep the fire going until we head into our tents and sleeping bags.

A word of caution: Don’t let the urge to belly up to the fire get out of hand. I have seen boot soles melt and expensive clothing pocked with ember holes. Fletcher once saw a friend’s sleeping bag catch on fire. They had to drag it to the river.

Make sure the places you camp allow open fires. National forests do, and so do many state forests.

To be sure, being outdoors in winter demands preparation and caution. Storms and drops in temperature happen quickly.

I once backpacked with a friend to a trail shelter in a Pennsylvania state forest. We were staying in a shelter, so we didn’t bother taking a tent. The next day, a supposedly marked trail was nowhere to be found. As we bushwhacked up the mountain, ultimately lost, freezing rain started. It was getting dark, and we contemplated the real possibility of having to spend the night without shelter. Fortunately, we crossed a road and got our bearings, but the episode demonstrated how quickly things can change drastically.

And if there’s one mantra of those who spend a lot of time outside in the cold — besides “cotton kills” — it’s to dress in layers.

Dressing in layers of clothing allows you to shed garments as you warm up walking or don clothing when you stop and the chill settles in. It’s a simple formula too often ignored.

Against the skin, it’s important to have a layer of synthetic material to wick away sweat and dry out quickly so you don’t chill when you stop moving. Both a long-sleeved top and long underwear make up this base layer. They are often made of synthetic material such nylon, rayon, spandex or polypropylene, silk or Merino wool and come in different weights suitable for various conditions. Do not use cotton because it loses its insulation ability when wet.

Next comes an insulating layer to retain body heat. It may be fleece, wool, down or a synthetic material. In addition to covering your upper

body, some people wear this layer over their long underwear as well.

Finally, you need a light outer garment, or shell, to keep the wind, rain or snow away from your legs and upper body. Hard-shell jackets are completely waterproof and windproof but can get clammy. Soft-shell clothing breathes better and is fine if it is not precipitating.

Round out your preparations with a beanie, insulated gloves or mitts, socks and boots. Take widemouth water bottles — they don’t freeze as fast — and keep them insulated in your pack or against your body. A sleeping bag rated to below freezing is a must if you camp out.

For winter outings, the world is your oyster. The spots are uncrowded, and the landscape has a different look. Here are choice places in the Chesapeake Bay region.

Though it's been a while, I've always enjoyed the winter season camping I've done for the many reasons in this article!