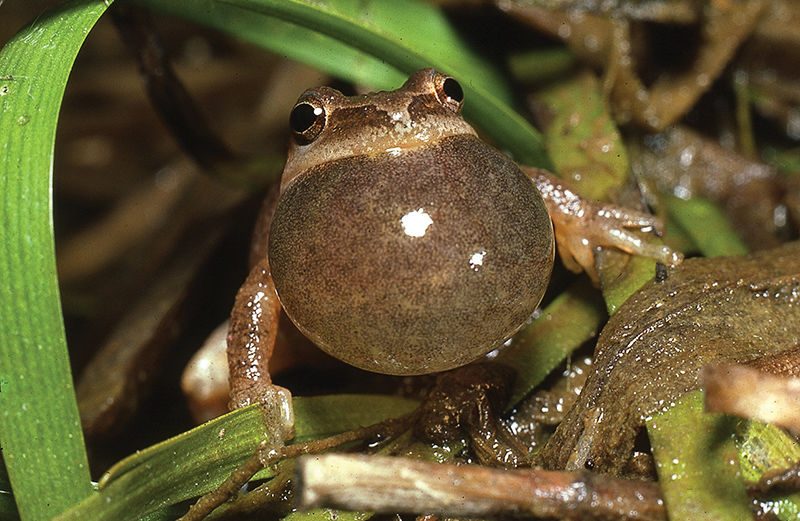 The call of spring peepers marks the end of winter for humans and a migration to temporary breeding ponds, known as vernal pools, for amphibians. (Jack Ray) 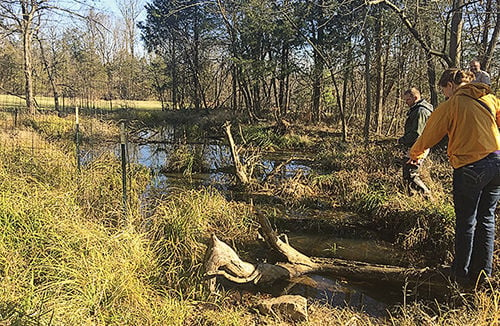 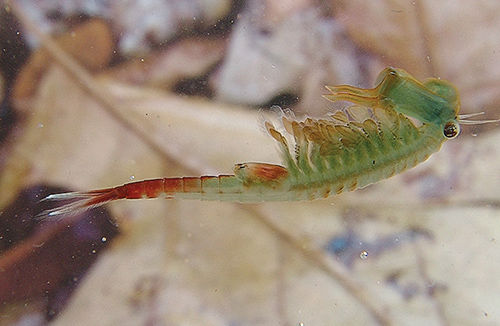 Fairy shrimp can be seen swimming under the ice in vernal pools. (Jack Ray) 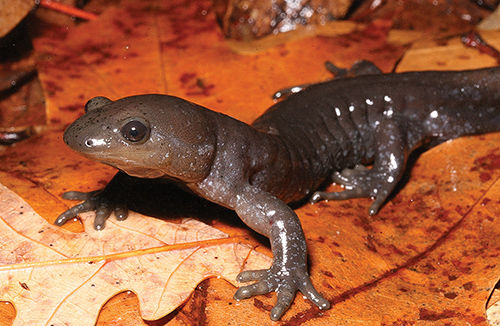 The Jefferson salamander is among the species that depend on vernal pools for breeding. The adults make an annual nighttime migration to the pools in which they were born, with numbers peaking during the “Big Night” when conditions are ideal. (Charlie Eichelberger, PA Natural Heritage Program)

The fields and forests of Gifford Pinchot State Park in southcentral Pennsylvania are still in winter dormancy, but not for long. You will actually hear the change.

When the days are cold and short but the spring thaw draws near, the shrill call of spring peepers will announce that winter is over. The familiar sound, which signals spring for humans, is the peepers’ call for survival. It marks the yearly ritual when peepers — small chorus frogs — as well as spotted salamanders, wood frogs and other amphibians return to the pools of water where they were born to mate and lay eggs. The mass migration to shallow pools is a short window into the world of these sometimes elusive animals that takes place for a few nights every year in early spring. Days later, egg masses are all that remain of the creatures in the pond until the young hatch and crawl onto land.

“The first time I saw it, it really blew my mind,” said Jesse Rothacker, of Lancaster, PA. “You usually go out hoping to find a reptile or amphibian or two, turning over logs and rocks. But during spring migration, you shine a light on the pond and hundreds of eyes are shining back at you.”

Rothacker is a member of the Lancaster County Herpetological Society, a group of amphibian and reptile aficionados. Each year, members take an annual camping trip to Pinchot State Park, a 25-minute drive from Harrisburg, during the time that amphibians are ready for their “Big Night.” The group dons headlamps and waders to discover the now-hidden amphibians that mate and lay eggs in the park’s five vernal pools.

Vernal pools are temporary wetlands, fed by snowmelt and spring rain, which dry up in the late summer. While all amphibians need water for their juveniles to develop, some species, such as marbled and spotted salamanders, spadefoot toads and wood frogs, are completely dependent on these pools for procreation because they contain no fish that would otherwise prey on their eggs.

Pinchot State Park was created from farmland, where fields are reverting back to their natural state with help from park personnel and volunteers. The park’s vernal pools evolved from breached farm ponds and dumping sites — such as the informally named “toilet bowl pond” from which dozens of old urinals were removed. Some areas were overgrown with invasive species, like multiflora rose, which suctioned much of the water from the pools and caused them to dry out before the amphibian larvae could mature.

The fairy shrimp is another creature found in vernal pools, and many of them can be viewed very early in the season. Kings Gap State Park, located about 50 minutes west of Pinchot, is known for having “oodles” of fairy shrimp in its pools, according to Betsy Leppo, an invertebrate zoologist with the Pennsylvania Natural Heritage Program.

“Kids really like the fairly shrimp,” Leppo said. “They are really beautiful shades of pink and blue and can even be seen swimming under ice because they are full size by March or April.”

Both Pinchot and Kings Gap parks offer programs on vernal pools. The Nature Conservancy owns the 70-acre “vernal pool complex” at Kings Gap, called the Forest Pools Preserve. The preserve has self-guided kiosks and a trail between each site that interprets the life that the water contains. In addition, the conservancy offers annual guided tours — usually two in the evening and one during the day — when participants can learn about the species that use the ponds and how to identify their egg masses.

Researchers have found that restoring and creating vernal pools can help bolster amphibian populations that are in decline as a result of the global loss of wetlands. Threats to pools are the same as threats to wetlands everywhere: water pollution from land or nearby waterways, pesticide chemicals (usually from spraying for mosquitos) and — the biggest problem by far — habitat loss through development.

Wetlands are protected by federal law, but vernal pools are considered little more than big, temporary puddles. As roads and homes are developed, these life-giving resources are often filled in by developers or landowners.

Disease is also an issue. During tours, participants are asked to wash their wading boots in soapy disinfectant before venturing into the water. In some cases, pools are closed to the public.

But protecting amphibian habitat requires more than just restoring and protecting the pools, Leppo said. Healthy upland forests are critical, too. Mole salamanders, a group that includes most salamanders from Pennsylvania, live underground in upland forests until that spring call to mate. The spadefoot toad is also subterranean and rarely seen, she said. It uses its unusual front feet to burrow underground. “Wood frogs live under leaves completely, like little lumps, until it’s time to breed,” Leppo said.

Even if you miss the “Big Night” of amphibian migration, there are other ways to help identify and protect vernal pools and the life they maintain.

In Pennsylvania, the Natural Heritage Program is a partnership of state and private conservancies that helps to study and record special ecosystems throughout the state. They maintain a database of vernal pools that curious hikers and naturalists can download and help to expand. Hikers can download a vernal pool survey form and take it with them to record and submit information about vernal pools that they encounter. Photos and GPS locations can be accessed and uploaded, too.

“The registry is very helpful to researchers in the state,” said Aura Stauffer, wildlife biologist for the Pennsylvania Department of Conservation and Natural Resources, which manages Pennsylvania’s state forests and parks. “We have 121 state parks and 20 state forests and seven park naturalists. When someone out hiking in parks contributes to the registry, we’re able to pull those data and we can choose which to go see what is out there.”

The program’s website also contains resources for identifying vernal pools during a dry period, monitoring vernal pools and, of course, all kinds of information about animals and conservation.

Another way to get involved in the grand scheme of amphibian life is to help to improve pools or the upland habitat in local parks and forest, said Jack Hill, park natural resource specialist at Pinchot State Park. Hill led the restoration of the pools scattered throughout the 2,228 acre park in August of 2016. A group of volunteers, including people from Maryland and other areas in the Chesapeake Bay region, traveled to Pinchot to help. Work is ongoing.

“We make a lot of use of volunteers,” Hill said. “It’s amazing how much more a group of six to 10 people can get done. There will always be opportunities for volunteers in our parks.”

There are ways to view and help amphibians wherever water and pools exist, Rothacker said. He encourages people to find and conserve pools close to their homes.

The Lancaster Herpetological Society maintains a Toad Watch email list. As migration gets under way, they send out a mass email to volunteers that help American toads — a heartier species than many — cross the road in a suburban area.

Ironically, the society discovered the American toad migration path in their area by accident, while meeting in the Manheim Library, which is right in the middle of the toads’ travel route. The library was built in a 260-acre community campus that has a natural area with plenty of ponds and wetlands. But as roads were developed, along with a golf course, dog park and other community entities, the toads needed help for safe passage. The township has posted “Toad Crossing” signs to warn motorists to watch for the toads and drive carefully.

“Where we do the migration event, it’s American toads,” Rothacker said. “Depending on where you go, you can see spotted salamanders or wood frogs. You can have a really neat experience. It’s kind of like having a front row seat to an ancient ritual.”

Spring is coming soon. Listen for it.

Timing is everything: Be ready to witness the herp migration

This list of parks and resources will help you discover the wild world of spring amphibian migrations. Event dates are not set far in advance, because the migrations depend on weather. Check with local groups or organizations often, and sign up now for notification emails.