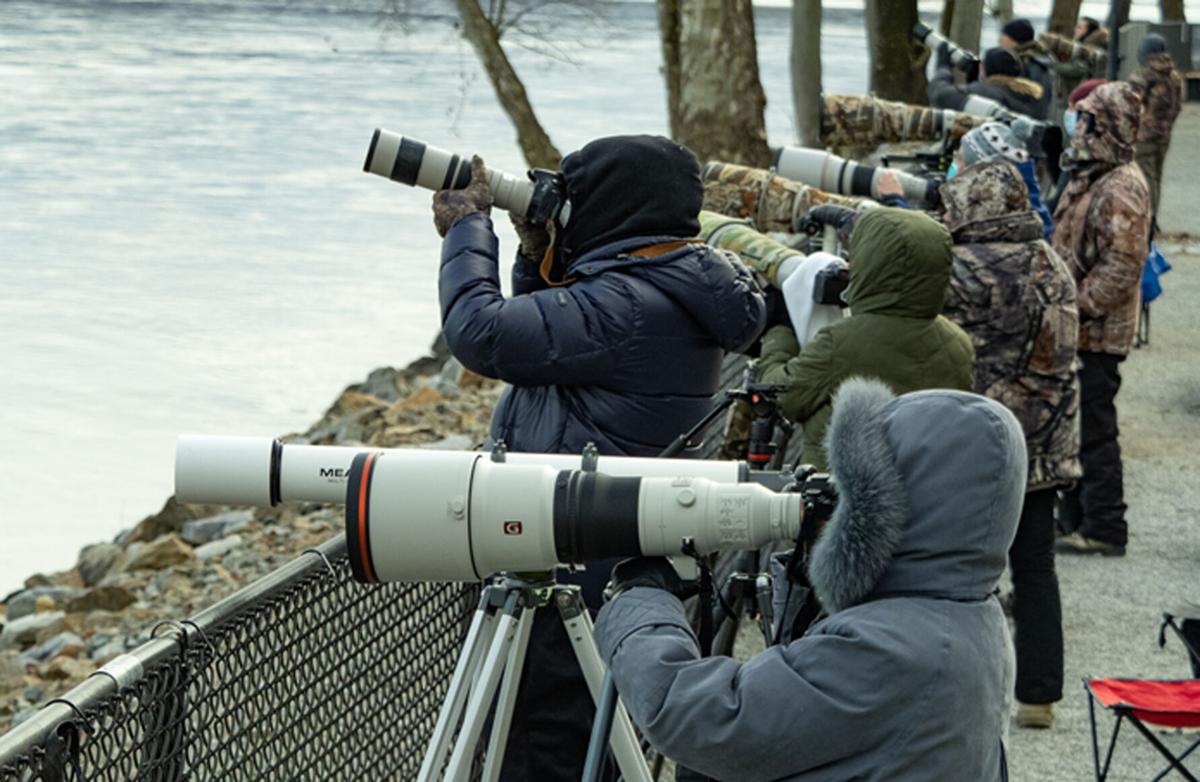 Photographers who gather at the Conowingo Dam on the Susquehanna River can number 100 or more. 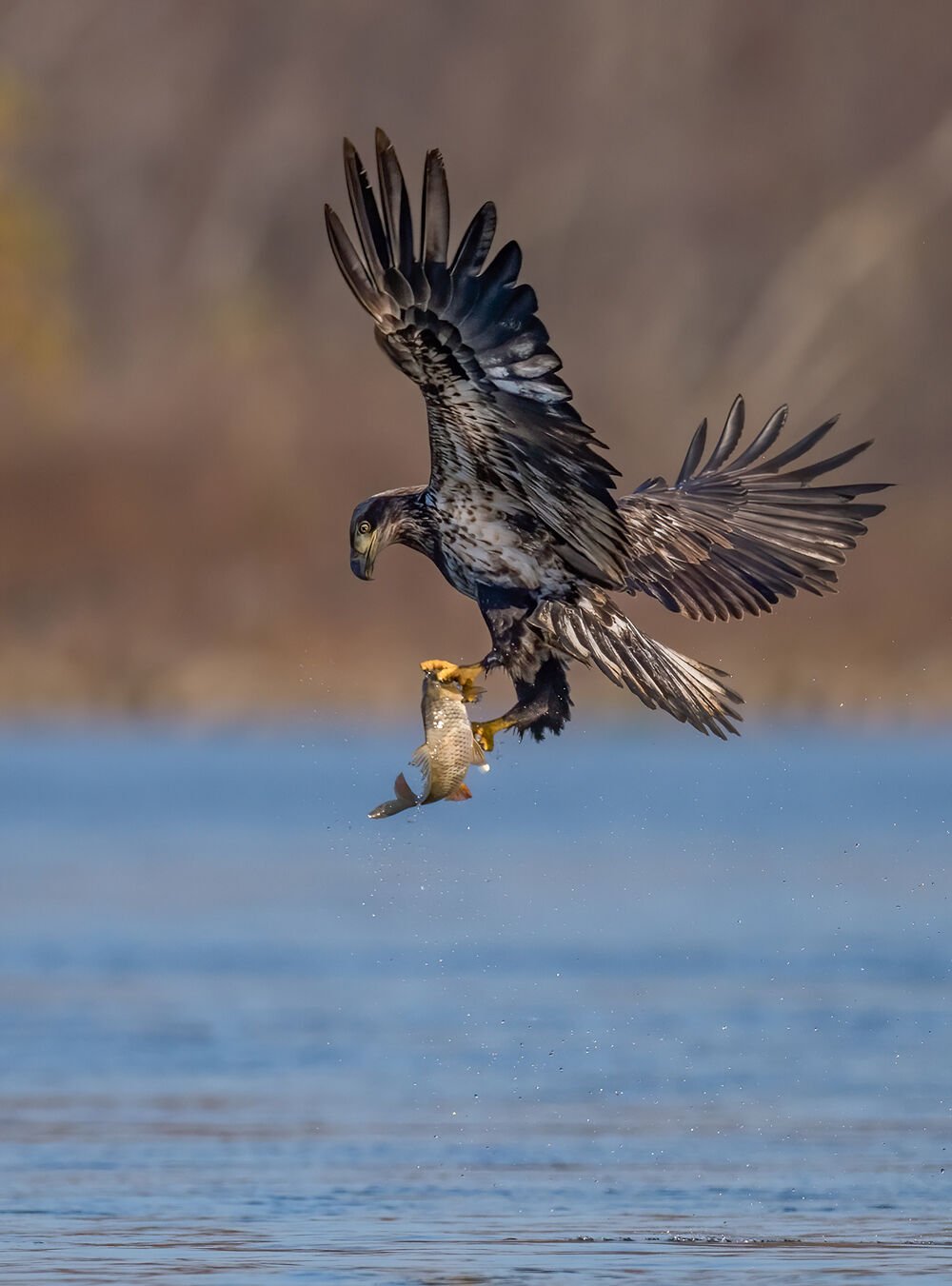 A immature bald eagle makes off with a freshly caught fish at the Conowingo Dam. 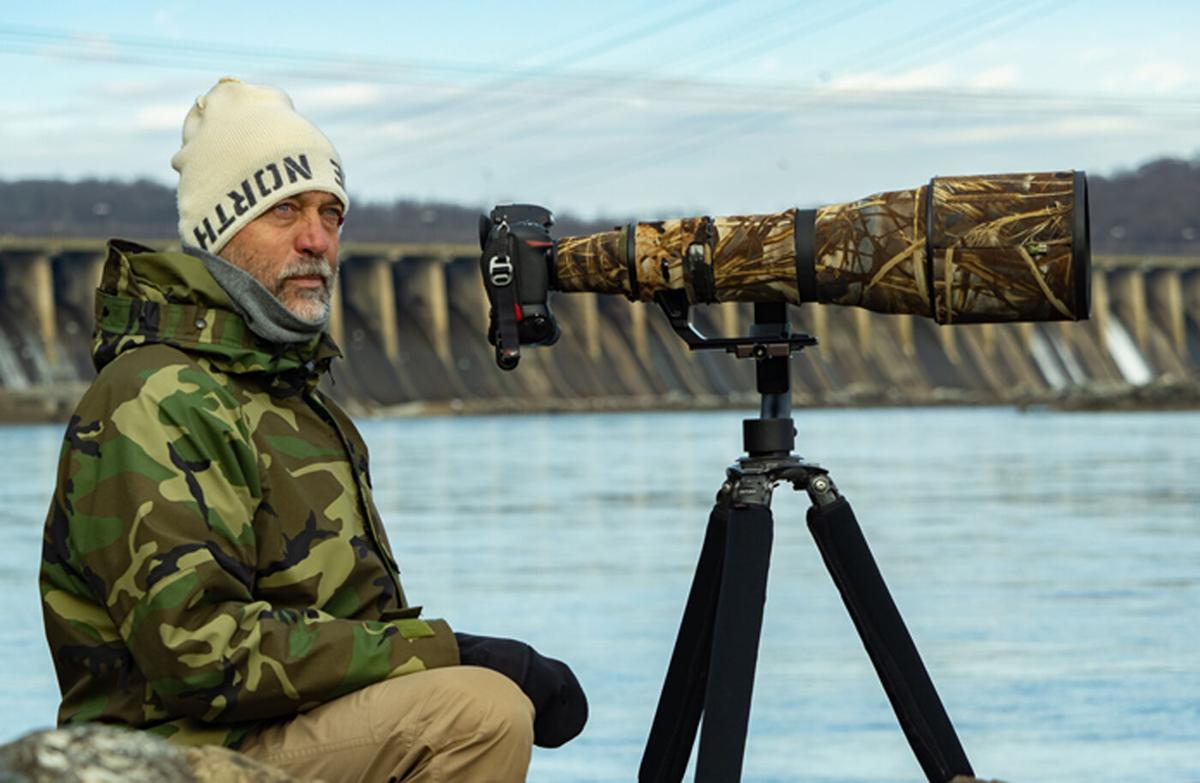 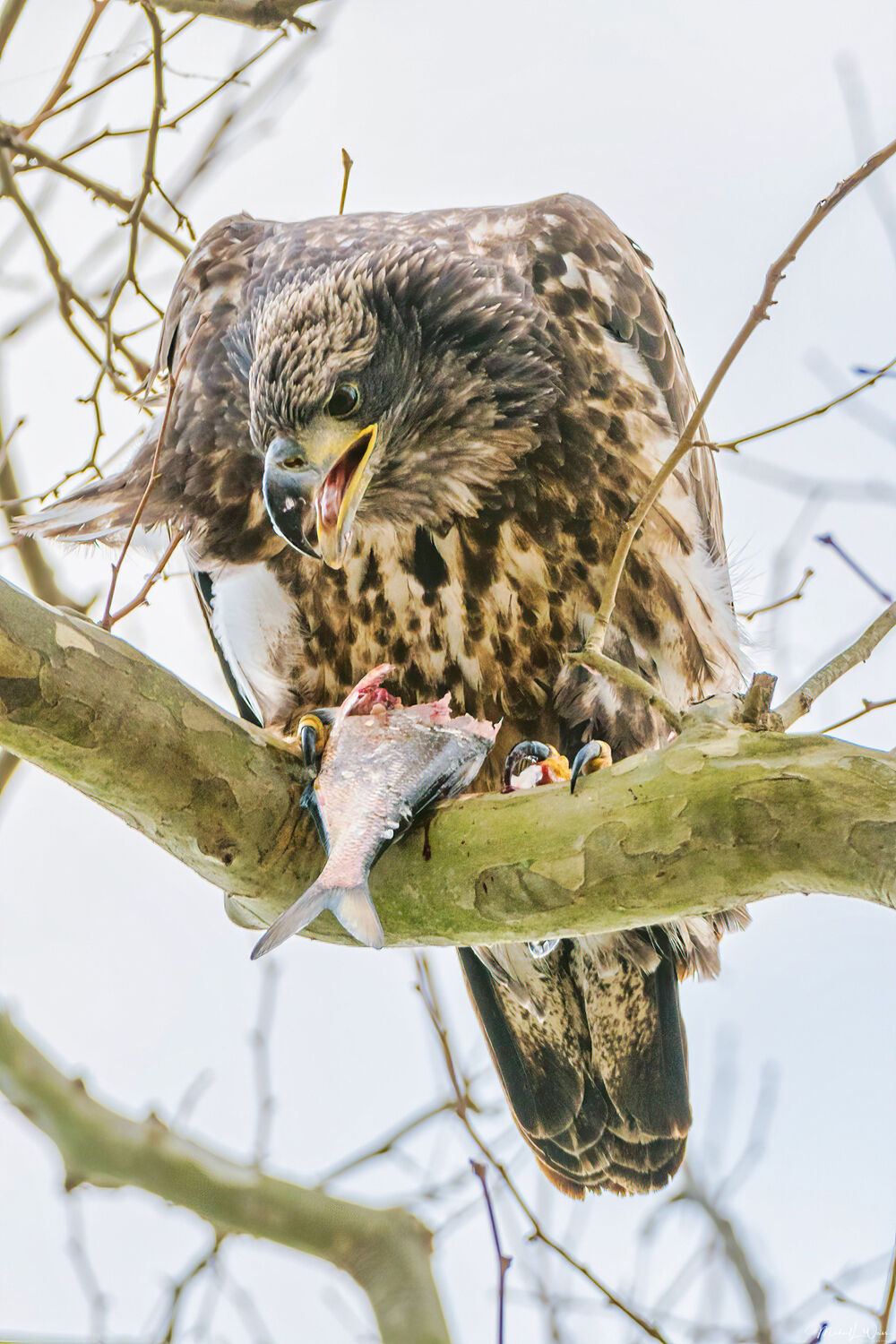 An immature bald eagle seeks refuge in a tree to eat a fish skimmed from the Susquehanna River at the Conowingo Dam.

It’s a chilly 27 degrees and still dark, but already a dozen or more photographers are setting up tripods and long lenses at the base of Maryland’s Conowingo Dam. They hope to capture dream images of bald eagles — closeup, diving for fish and often robbing each other in midair.

One of the ramped-up hopefuls is Maria Costello of Philadelphia. It’s her first time visiting the tailrace where water exits the Conowingo Hydroelectric Generating Station on the Susquehanna River near the Pennsylvania line. She’s determined not to miss a moment of the opportunity. Several weeks earlier, the wildlife photographer had been blown away by a friend’s shots of two eagles in aerial combat over a fish plucked from the surface.

In recent years, the spectacle of hundreds of adult and immature bald eagles at one place made the dam an international destination, and not just for photographers, who can sometimes number 100 or more. Now, tour buses disgorge tourists from New York and New Jersey who have heard about eagles flocking here in incredible concentrations.

October through January is the peak time to see lots of eagles.

“I couldn’t believe the number of bald eagles that were there,” said Dave Lychenheim, who founded the Conowingo Bald Eagles Facebook page, of his first experience at the dam. “It kind of makes you breathless when you see them.”

Few other places on the continent provide a close view of eagles as they perform aerial feats while diving for fish, their tail feathers skimming the water before rising upward with the prize locked in yellow talons.

Plucking a fish is hardly the end of the drama. More often than not, trailing eagles will dive at the avian angler, trying to dislodge the fish. Sometimes, the freefalling fish is snatched out of midair.

The river robbery is often successful, sometimes multiple times, before a victor wings away to a tree to devour its catch. Even then, the eagle may find itself winging through the labyrinth of branches with several eagles in pursuit.

Adult eagles sometimes take their young on training runs. The parent will catch a fish and deliberately drop it so the juveniles can practice scooping it off the water surface with their talons.

Year-round, approximately 75–100 eagles have nests along the Susquehanna and fly up to about 25 miles to reach the dam. They are joined by others who visit in the fall and winter.

Eagles gather at Conowingo for a simple reason: reliable food. Especially in the spring, migrating fish find themselves blocked from moving upriver and mill around the tailrace. Throughout the year, fish on the upriver side of the dam are killed or stunned as they are sucked through 10 generators in the nearly mile-long dam.

The peak number of eagles arrives in the fall and winter when lakes and rivers freeze farther north in New York state and the Ohio Valley. The always moving tailrace, in contrast, never freezes.

Eagles perching in trees and on towers and rocks can see a belly-up fish from about 1.5 miles away.

Around 350 eagles have been counted on top days. Lychenheim has been going to the dam for 10 years, in all seasons, and always sees eagles. He once had 20 in his camera frame at one time.

In recent years, peak numbers have declined, a trend he attributes to climate change and fewer waterways freezing.

Some of the eagles at Conowingo have developed a kind of Pavlovian response to the sirens and flashing lights that announce when the dam is about to release water.

“The eagles will start chirping and getting into position,” Lychenheim said.

How do far-off eagles know to come to Conowingo? Lychenheim and John Maloney, a 76-year-old Conowingo groupie from Columbia, MD, believe the birds of prey somehow communicate with each other.

They talk of spots on lakes in the region that become ice-free. Within days, groups of eagles from Conowingo will show up at the new fishing spot — experienced birders can identify some of the eagles because of bands they wear from an earlier eagle restoration project.

Lychenheim, who used to work on the Hubble Space Telescope for NASA, started the Conowingo Bald Eagles Facebook page nine years ago to provide tips for viewing eagles at the dam. It includes almost daily posts of images by photographers of all skill levels.

Veteran eagle watchers at the dam know to check with anglers at the fishing grounds below the dam to see if they are catching fish — a sign that eagles will likely be on hand, too. Observers help each other by calling out incoming eagles. The more eyes, the better.

You never know where the action ends up. “Bald eagles will chase each other right down the parking lot, 10 feet above the cars,” Lychenheim said.

Mike Weiss, a professional photographer from Silver Spring, MD, and moderator of the Facebook page, noted that eagles aren’t the only attraction. “Cormorants throw catfish straight up in the air and catch them headfirst,” he said. Gulls can be abundant, and across the river is one of the largest great blue heron rookeries in the region, with stick nests festooning the trees.

Lugging a camera and tripod, Weiss took a moment to advise an amateur photographer on the bank. “Don’t forget to look for eagles after they catch a fish. You want to shoot the eagle eating the fish.”

With the crowds comes occasional friction. A rounded platform originally built for anglers above the tailrace can be stuffed with photographers.

And the energy-generating dam, owned by Exelon, is a subject of contention for the Chesapeake Bay cleanup. Despite the presence of fish ladders, it interferes with migration for both fish and eels, and river advocates express concern about the impact of artificial flow rates on the Susquehanna’s ecosystem. While the dam once blocked some pollution from flowing downstream, the reservoir behind the dam has filled with sediment and now releases more nutrients downstream, adding to the costly regional effort to restore the Bay.

But for those moved by a close encounter with the country’s national bird, it has been a blessing.

The spots for viewing eagles at the base of the Conowingo Dam are located at 2569 Shures Landing Road, Darlington, MD. Public access is open 5 a.m. to sunset. Due to COVID restrictions, entry may be limited if the parking area fills up. The best vantage points are the fisherman’s wharf, which is closest to the water, and along the fence that lines the riverbank in the parking area. Drones are forbidden.

Eagles gather at the dam year-round. Peak numbers occur October through January. The spring migration of shad in April and May is a popular time, as is fall with male eagles fighting over mates against bright foliage. Some eagle watchers come when power generation is under way and more fish come through the dam. Call 1-888-457-4076 to get the next day’s generation schedule, though it is not always followed.

For peak photography conditions, you want light south or southwest winds so the eagles will be facing you as they dive. Eagles will be less active in very cold weather. Avoid times when water spills from floodgates after heavy rain because the flow pushes fish away from the viewing areas.

Be sure to check out the Conowingo Bald Eagles Facebook page for the current activity at the dam. A popular and educational Conowingo Eagles Day takes place at the dam each November. It was cancelled in 2020 because of COVID-19.