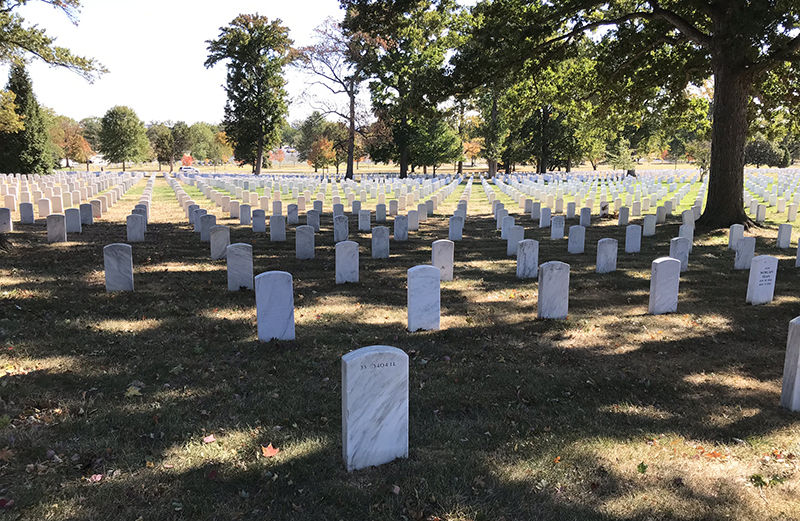 Rows of gravestones cover most of the ground at Arlington National Cemetery in Virginia. The grounds also include more than 8,600 trees representing hundreds of species and varieties, with a 12-acre patch of old growth forest known as Arlington Woods. 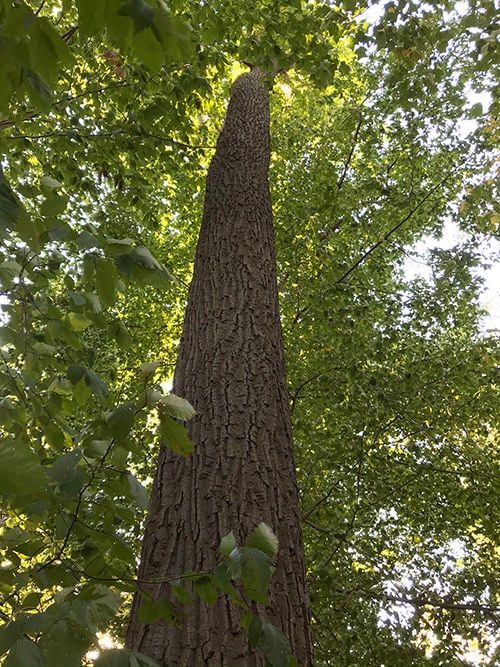 A large tree in Arlington Woods is among many there that tower over the forest and provide its thick canopy. 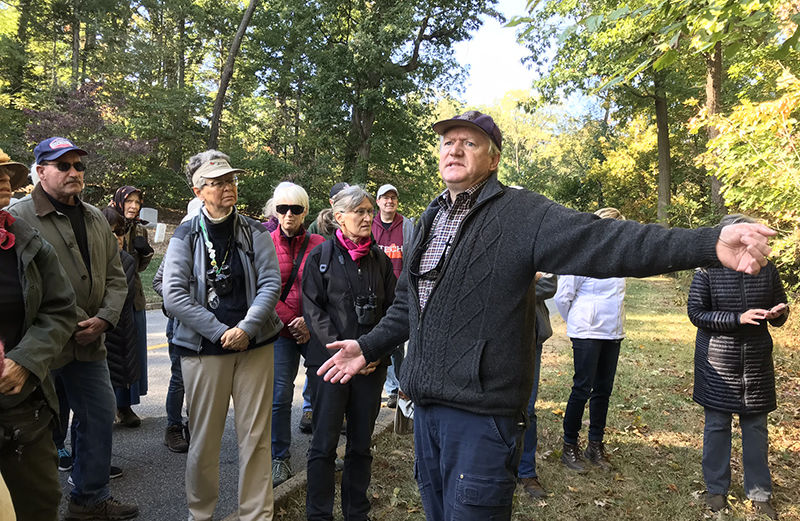 Rod Simmons leads a tour of Arlington Woods sponsored by the Landscape Designers’ Group of Washington, DC. “You’ll see a lot of trees that were here long before the Civil War,” he said. 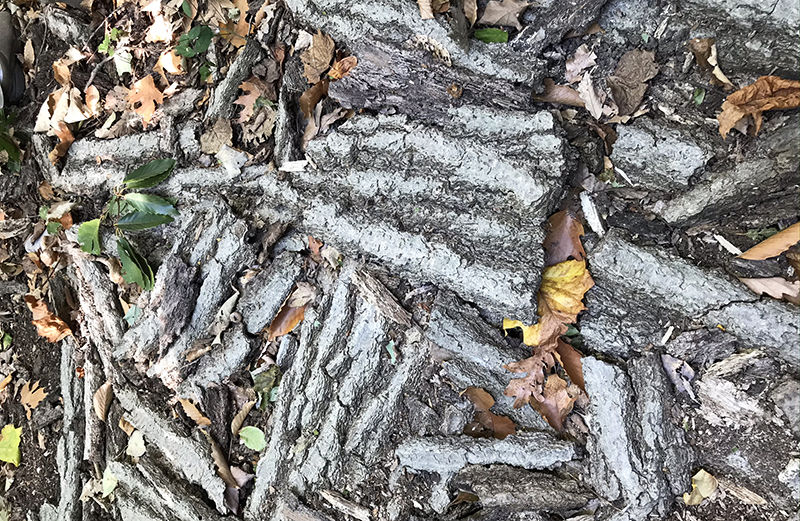 Chunks of tree bark lie on the floor of Arlington Woods. 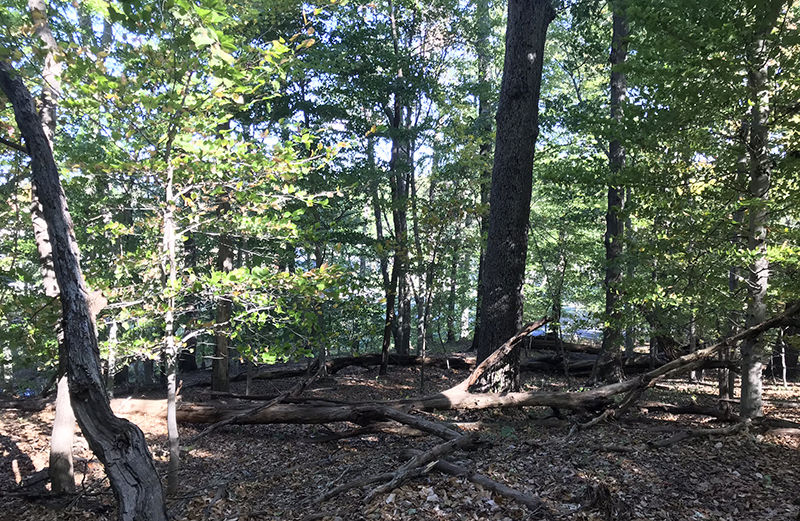 Cemeteries are places of remembrance. Arlington National Cemetery is perhaps the most famous, the final resting place of more than 400,000 veterans of American conflicts and their spouses.

More than 3 million people visit each year to see the gravesites, row upon row over more than 600 rolling acres across the Potomac River from Washington, DC. Many are drawn to the eternal flame at John F. Kennedy’s grave or to the majestic Tomb of the Unknown Soldier.

Virtually unnoticed among all of the headstones, there’s a different kind of memorial. It’s a 12-acre swath of trees tucked into a steep ravine downhill from Arlington House, the one-time home of the adopted grandson of the nation’s first president.

Arlington Woods is a remarkably intact descendant of the ancient forest that once blanketed much of Northern Virginia. Leaving the manicured cemetery behind to stroll among the towering oaks and hickories is to take a journey back in time, to contemplate this landscape as it was for eons. In the intervals between the whoosh of jets flying in and out of nearby Reagan National Airport, the only sounds are the whisper of wind in the trees and rustling of leaves on the ground.

“A lot of this is nature’s gift. It’s irreplaceable,” said plant ecologist Rod Simmons as he led a walking tour of the tract on a sunny Friday in October. The woodland is an old friend to Simmons, a member of the Virginia Native Plant Society, who seems to know every tree on the tract. He’s studied them, written about them and worked to save them.

This is an “old growth” patch of forest, he said, because there’s no record of it ever having been logged. He pointed out how closely the trunks were bunched, further evidence that the trees had not been planted or replanted by hand.

“You’ll see a lot of trees that were here long before the Civil War,” he promised.

Given the history of the land that is now Arlington cemetery, it’s extraordinary that these woods have survived relatively unscathed through the centuries.

They were once part of an 1,100-acre estate owned by George Washington Parke Custis, grandson of George Washington’s wife Martha from her first marriage. In the early 1800s, Custis built a Greek revival mansion atop the hill, clearing enough trees to afford a commanding view of the river and the fledgling nation’s capital.

While the lowlands along the river were converted to crop fields and some other areas used for pasture, most of the estate remained densely wooded. On a visit in 1824, the Marquis de Lafayette, the French general who fought with Washington in the American Revolution, reportedly remarked to Mrs. Custis, ““Cherish these forest trees around your mansion...recollect how much easier it is to cut a tree than to make one grow.””

When the Custises died in the 1850s, their only child, Mary Anna, inherited the right to live there. Her husband was Robert E. Lee, then an up-and-coming U.S. Army officer, who took over management of the estate. But in 1861, as the Civil War loomed, he resigned his Army commission and went south to lead Confederate forces, never to return.

Federal troops seized and occupied the property in May 1861, clearing more trees on the hill around the mansion to provide artillery sites sight lines for defending DC. Two years later, the federal government established a community for freed slaves on the southern portion of the property, which continued until the end of the 1800s.

In 1864, as cemeteries in the capital filled up with war dead, the Army designated 200 acres of the old plantation as a new military burial ground. Lee’s son briefly reclaimed the property in the early 1880s after winning a lawsuit claiming it had been illegally confiscated. But by then, thousands of slain Federal soldiers had been buried there, and he sold the land back to the government a few months later for $150,000.

The cemetery itself features more than 8,600 native and exotic trees of about 300 different species and varieties, some champion size and some nearly 250 years old, predating the military burials there. In appreciation of the formal and informal gardens and groves throughout the cemetery grounds, they were designated as a Memorial Arboretum in 2014.

But Arlington Woods represent a different, informal sort of memorial to the forest ecosystem that once existed there.

It has survived at least one more recent threat. Arlington House and the surrounding grounds are owned by the National Park Service but, in 1995, the service transferred 12 acres of the woods to the Department of Defense. The Pentagon wanted more burial space because the cemetery was filling up.

Nature lovers in the area only learned of the impending loss of old-growth trees at the cemetery when The Washington Post exposed the deal, Simmons said.

Up in arms, he and other environmental and community advocates rallied to ensure the rest of the woods would be spared and remain in park service control.

To get to Arlington Woods, our tour group separated ourselves from the busloads of visitors arriving every few minutes and walked from the cemetery welcome center to the neoclassical memorial honoring women who served in the military.

From there, we followed Schley Drive until it became Sherman Drive. Just past its intersection with Lincoln Drive, the woods stretched out down the hill to the right.

Some of the trees nearest Sherman Drive had turned prematurely brown in October, which Simmons suggested could stem from extreme heat and a lack of moisture. Despite last year’s heavy rains, many trees are stressed, making them more vulnerable to other threats, such as insects and disease.

At the edge of the woods, English ivy and other vines covered some trunks — the invasive bane of woody areas everywhere. Going deeper, though, the undergrowth disappeared as the light dimmed and the air cooled. The forest floor was relatively open, save for tree trunks toppled by wind and age in various states of decay. Leaves crunched and branches snapped underfoot.

Northern red oaks and chestnut oaks anchored the north-facing slope, with beech and tulips mixed in. Some seedlings poked up through the leaves carpeting the ground.

At the bottom of the hill, where the woods ended, there was a creek with just a trace of flow in it. It’s the type of habitat that might harbor the extremely rare Appalachian springsnail, Simmons said, along with somewhat less rarified Eastern box turtles.

Farther along, the group came upon a small spring-fed stream trickling down the slope, evidently the source of the water at the base of the hill. Even in droughts, Simmons explained, springs like this don’t run dry, providing water for plants and animals.

The forest canopy parted near there, allowing a minty patch of richweed to flourish in the light gap. Not far away, the group encountered a clear sign that despite a lack of wildlife encounters, they were not alone in the woods. A maple sapling had its bark stripped away, most likely by a male deer rubbing its head and antlers against it.

After more than an hour exploring the woods, the group worked its way up the hill, skirting a boulder-lined gully receiving stormwater runoff from the roads and buildings at the summit. We ended our tour at the back of Arlington House, which is closed to visitors until early next year as the mansion and outbuildings undergo a multimillion-dollar rehabilitation. There, visitors can find a sign with text and historical photos about Arlington Woods.

The tour Simmons led was a one-off event sponsored by the Landscape Designers’ Group, a nonprofit corporation whose members are DC area designers, arborists, horticulturists and others. Having a knowledgeable guide enriched the experience, but visitors to Arlington can still wander the woods on their own and soak up some old-growth atmosphere.

Arlington National Cemetery is in Arlington, VA, across the Potomac River from Washington, DC. It’s open daily year-round, 8 a.m.– 5 p.m. from October through March and 8 a.m.– 7 p.m. April through September. Admission is free. The site is also accessible by Metro. For information and directions, call 877-907-8585 or visit arlingtoncemetery.mil.

For those who’d like a similarly curated stroll, Simmons and other DC area nature lovers will be leading a winter solstice walk on Dec. 22 on the Gold Mine tract at C&O Canal National Historic Park. Though not old growth, it’s the largest

Piedmont forest in Maryland. The walk, which is free and open to everyone, is expected to go from 10 a.m. – 4 p.m. It begins at the Great Falls Tavern Visitor Center, 11710 MacArthur Blvd., Potomac, MD. For information, visit vnps.org.