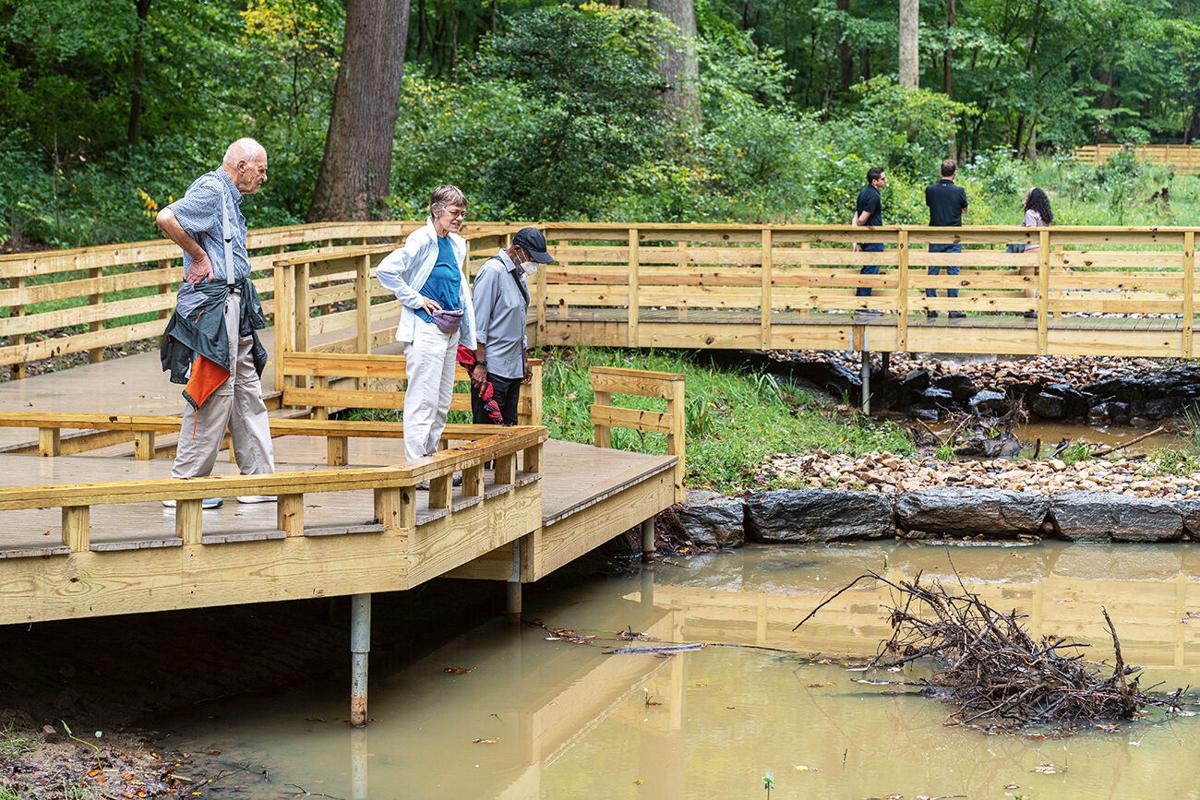 An accessible boardwalk provides a closer look at a pond habitat created in tandem with a step-pooled stream to better manage stormwater runoff. A root wad in the pond offers shelter for amphibians and aquatic invertebrates. (Courtesy of the Audubon Naturalist Society) 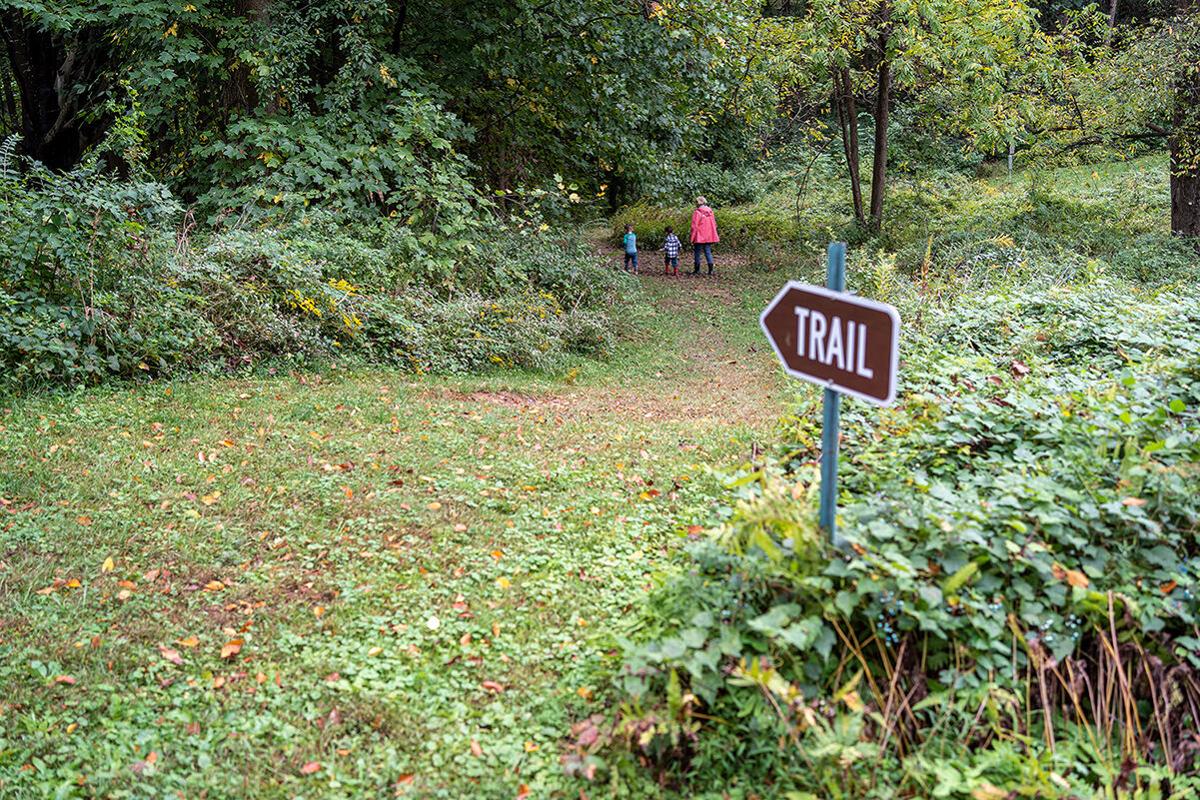 Visitors embark on a trail to explore a meadow at the 40-acre Woodend Sanctuary. (Courtesy of the Audubon Naturalist Society) 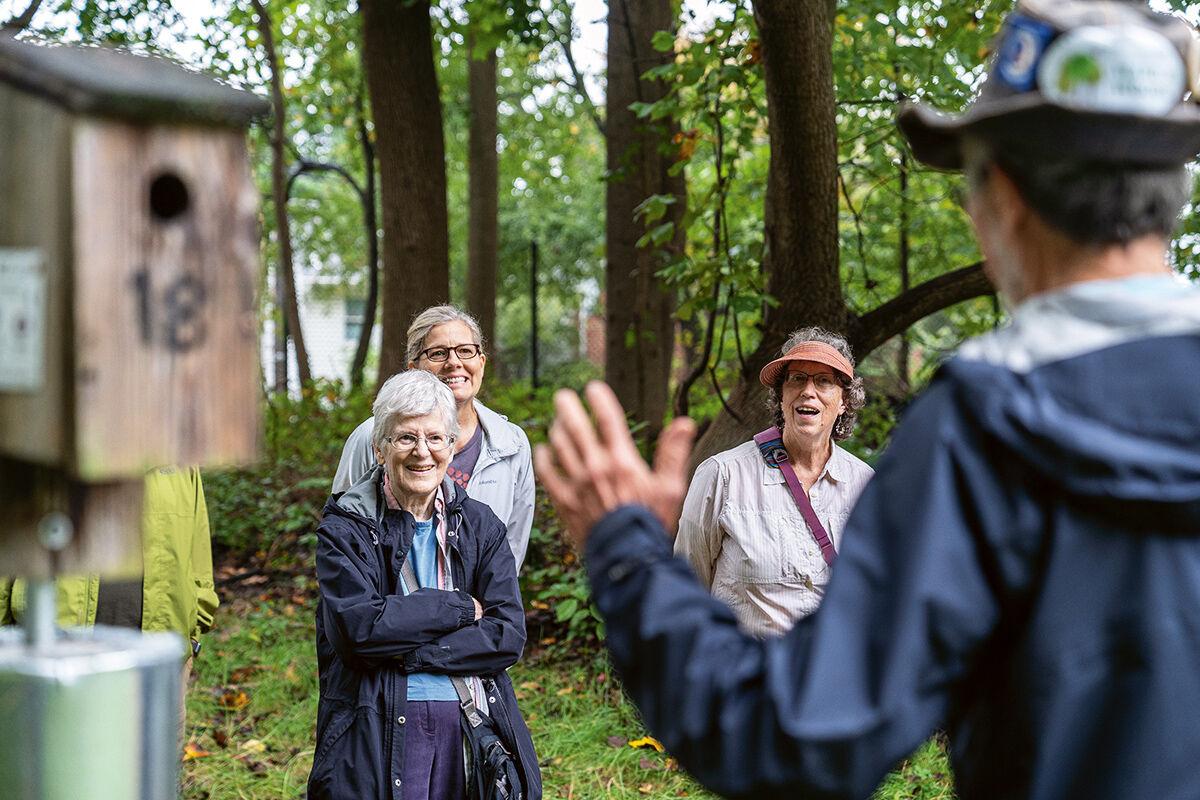 Tucked just inside the beltway in Chevy Chase, MD, is a woodland sanctuary worthy of an afternoon stroll — and accessible to all. People using wheelchairs, walkers or canes will find a welcome sight: an 8-foot-wide path, smooth with layers of water-permeable materials, granting access to meadows of native plants, restored streambeds and a tadpole-filled pond along a quarter-mile route.

During a mid-October visit, hawks were coasting above the trees that shade and buffer the property from otherwise busy surrounds not far from the nation’s capital. A brother and sister from different suburbs of Washington, DC, shared a picnic and caught up under a sprawling Japanese maple — a relic of the property’s past as a private estate. Nearby, children in an onsite preschool program traipsed through the woods.

The 40-acre Woodend Sanctuary unfolds around the Audubon Naturalist Society’s headquarters in a historic hilltop mansion at the center of the property, all of it gifted to the organization in the late 1960s. Since then, the group’s leaders have reimagined the site as a space that not only houses the DC region’s oldest independent environmental organization but also better embodies its values.

To that end, the nonprofit this fall wrapped up a three-year, $4 million project to restore habitats and a beleaguered stream running through the property while building a wheelchair-accessible trail alongside it. An open house event in October welcomed busloads of visitors, many of whom would not have been able to see the meadows, forests and wetlands if an uneven dirt trail had been the only way to reach them.

“What makes it special is that we can showcase this kind of environmental restoration in a park setting,” said Alison Pearce, who oversaw the effort as deputy director of the Audubon Naturalist Society.

Many restored streams in the Chesapeake Bay watershed are tucked largely out of sight, deep in the woods where they benefit fish or behind a housing development where they help alleviate the impact of new construction.

The Audubon group wanted this project — which entailed heavy construction in areas of the property for months — to meet more than one need. In the end, it made sense to improve accessibility and wildlife habitat at the same time.

Funding for the project came from a variety

of sources, including the Montgomery County Recreation Trails Program and its Department of Natural Resources. Donations from individuals and grants from the National Fish and Wildlife Foundation and the Chesapeake Bay Trust also helped with design, green infrastructure

The only creatures not welcome inside the main property’s 33 acres are deer. A 10-foot fence stretches around almost all of the tract to protect the native plants that for years could not take root because of incessant browsing.

Now, serviceberry and pawpaw trees are sprouting along the paths, sycamores are spreading out along the stream and Eastern cottonwood saplings are volunteering in the forest. After the dirt trail running along the stream was used as a road for construction vehicles, it was rebuilt as an extra-wide path that could accommodate wheelchairs.

The path itself is an example of how both the environment and the people who visit it were considered in nearly every aspect of the project. The top layer was made by mixing small sand-colored pebbles with a polymer — “sort of like making rice crispy treats,” Pearce said — and letting it set smooth. Water that hits the surface immediately runs through the top layer to be slowly filtered by layers of larger rocks below.

From a starting point near the main building, the trail takes a wide curve around a meadow visible through forested patches. That curve is wider than it used to be to allow the slope of the path to remain less than 8%, in accordance with U.S. Access Board guidelines, created to support the Americans with Disabilities Act (ADA).

Still, wide benches are perched at both ends of the slope “should someone come up it and then need a rest,” Pearce said.

Farther along the trail, the Mayapple Overlook (named for the green umbrella-shaped flowering plants that grow in the understory) serves as a deck for gathering and discussing the scenery. Short benches on either end provide seating, while areas between the benches offer room for wheelchairs to park off the main trail. The nonprofit consulted with the Montgomery County Public Schools’ office of special education in designing these features.

“The thing that strikes me is that [the project] has such a functional air about it,” Scott Fosler said during a tour in mid-October. A former society board member, Fosler helped guide the strategic planning for the restoration. “It just really makes sense in terms of the practical things we were trying to accomplish — people enjoying nature in different ways, including those that need special accessibility.”

Every accommodation along the trail is intended to give visitors up-close views of different habitats, many of them painstakingly restored in recent months.

The early successional meadow that spreads down a slope from the mansion is one that might have historically cropped up after disturbances in the forest, such as fire. The nonprofit maintains it by seeding native crops, such as the yellow-flowered partridge pea, and by mowing once a year.

With so much development surrounding the property, “we don’t really have that dynamic landscape anymore,” Pearce said, “so it’s up to us to intervene with management to make sure we have a nice mix of habitat types.”

Shrubby areas along the trail welcome birds like the Carolina wren we heard on our walk, its shrill “teakettle, teakettle” whistle cutting through the quiet. Visitors are also likely to hear the woodpeckers that frequent the property, pecking its towering tulip poplars for a meal.

Brilliant indigo buntings migrated through the landscape earlier this year, Pearce said, and a red-tailed hawk followed the stream restoration crew through much of the summer to see what sort of critters the work might rustle up.

The habitats and many of the landscaped spaces here double as stormwater management for the stream below, helping to slow and absorb water that hits the hardened surfaces of the house or runs down the slopes. None of that was considered in the 1920s, when architect John Russell Pope designed the hilltop mansion. But how the water flows — and how slowly — was a focal point of the most recent project.

From elegant permeable pavers outside the mansion’s gift shop to grass-growing bioswales along the path, the project shows that “you can design stormwater management to fit any landscape,” Pearce said. But restoring the unnamed stream running through the center of the property and into adjacent Rock Creek Park was the pinnacle of the project.

The upper portion of the stream is ephemeral, filled with water only when it rains enough. It was in good enough shape when the project began that there was no need to remove mature trees around it for engineered restoration.

The rest of the stream was another story. The restoration work, which covers 1,700 linear feet of the stream, began at a spot where waters flowing off the surrounding landscape had scoured the stream so much that it looked more like “a 10-foot canyon,” Pearce said.

Keeping as many established trees as possible on the south side of the stream became a guidepost for the rest of the work. Rather than widening the stream to recreate a floodplain, the project created a system of step pools with rock and log weirs to slow and filter water as it flows down the natural slope of the property.

The design proved effective even when Hurricane Ida drenched the area with heavy rain in early September.

“The most important thing about this is that we’re not sending nitrogen, phosphorous and sediment to Rock Creek, to the Potomac and to the Chesapeake Bay,” Pearce said. “And then a side benefit is that it creates really great amphibian and aquatic invertebrate habitat as well.”

That habitat is on intimate display in a small streamside pond, paired with a new accessible boardwalk. This allows wheelchair users to pull right up to the pond’s edge. From there, they can use extra-long-handled dipnets to scoop up tadpoles for an even closer view.

Woodend Sanctuary is located at 8940 Jones Mill Road, Chevy Chase, MD. The site is open daily from dawn to dusk. Admission is free.

The well-stocked Audubon Naturalist Shop located in the historic mansion is open from 11 a.m. to 3 p.m. daily except Wednesdays and Sundays. Portions of the space are periodically closed for private events such as weddings. Check anshome.org/visit for notifications of closures.

For additional outdoors sites that are accessible, visit birdability.org.