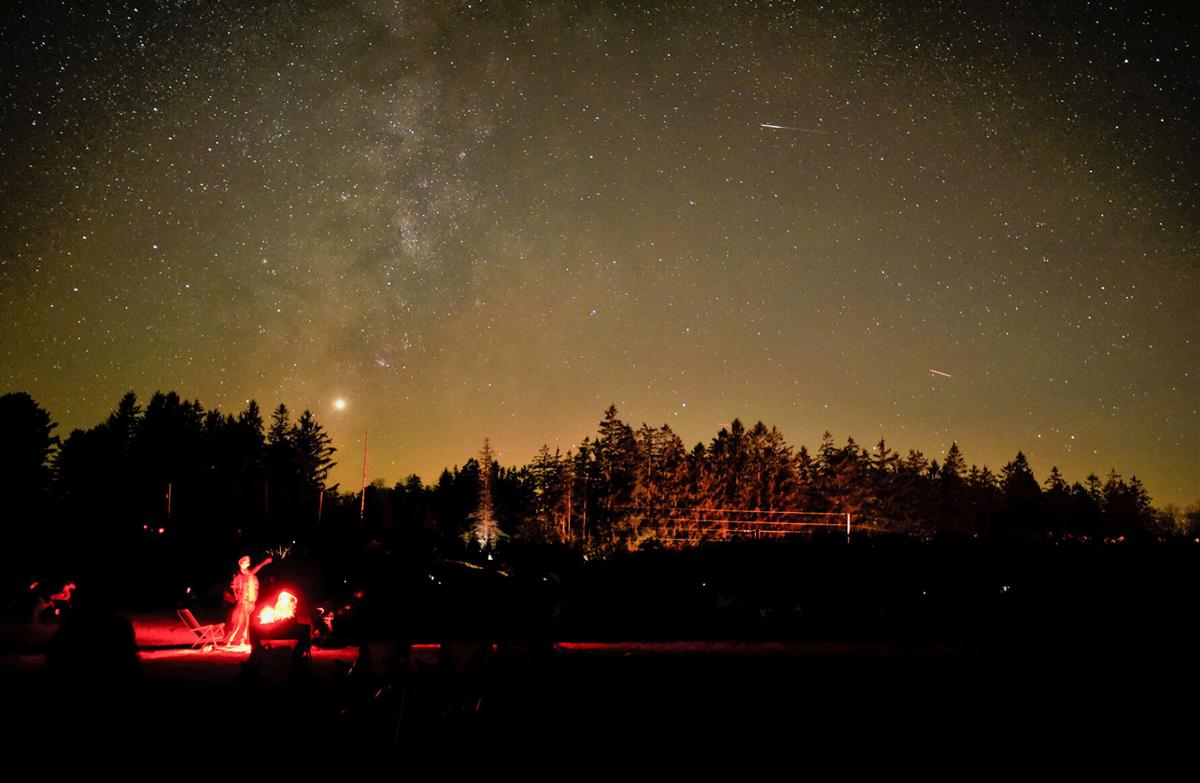 Stargazers stare up at a true dark sky at Cherry Springs State Park in Pennsylvania. 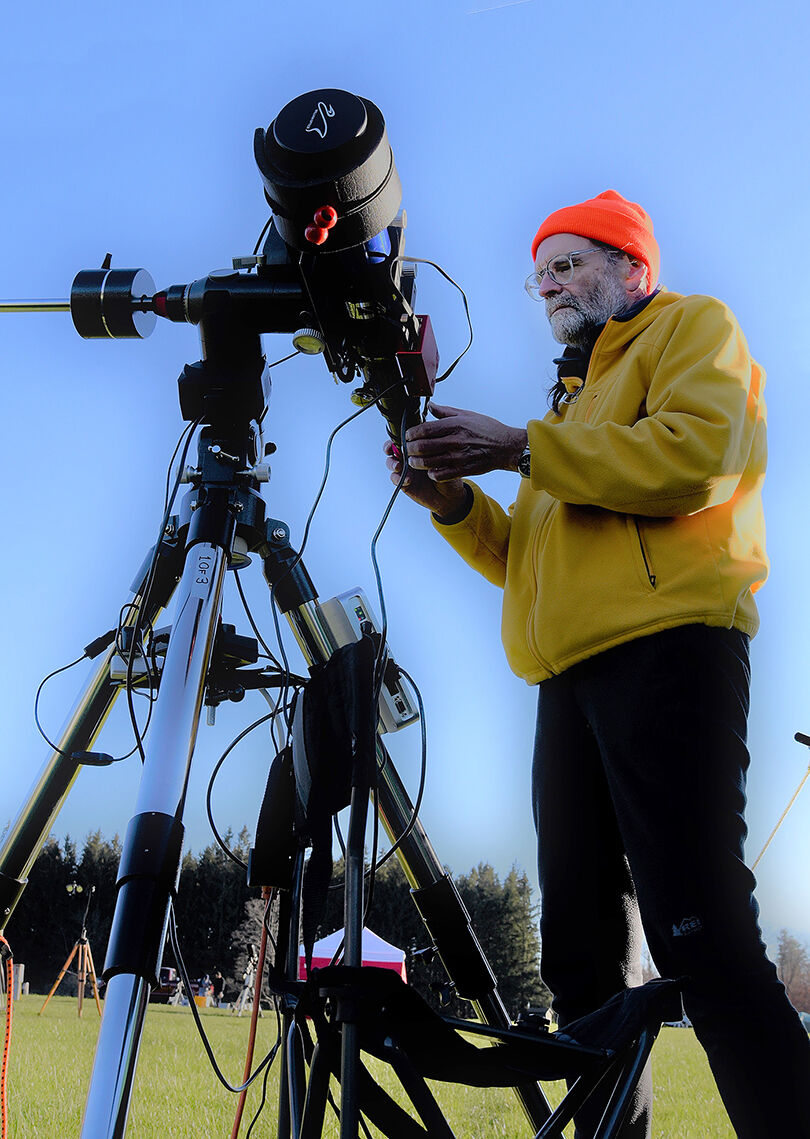 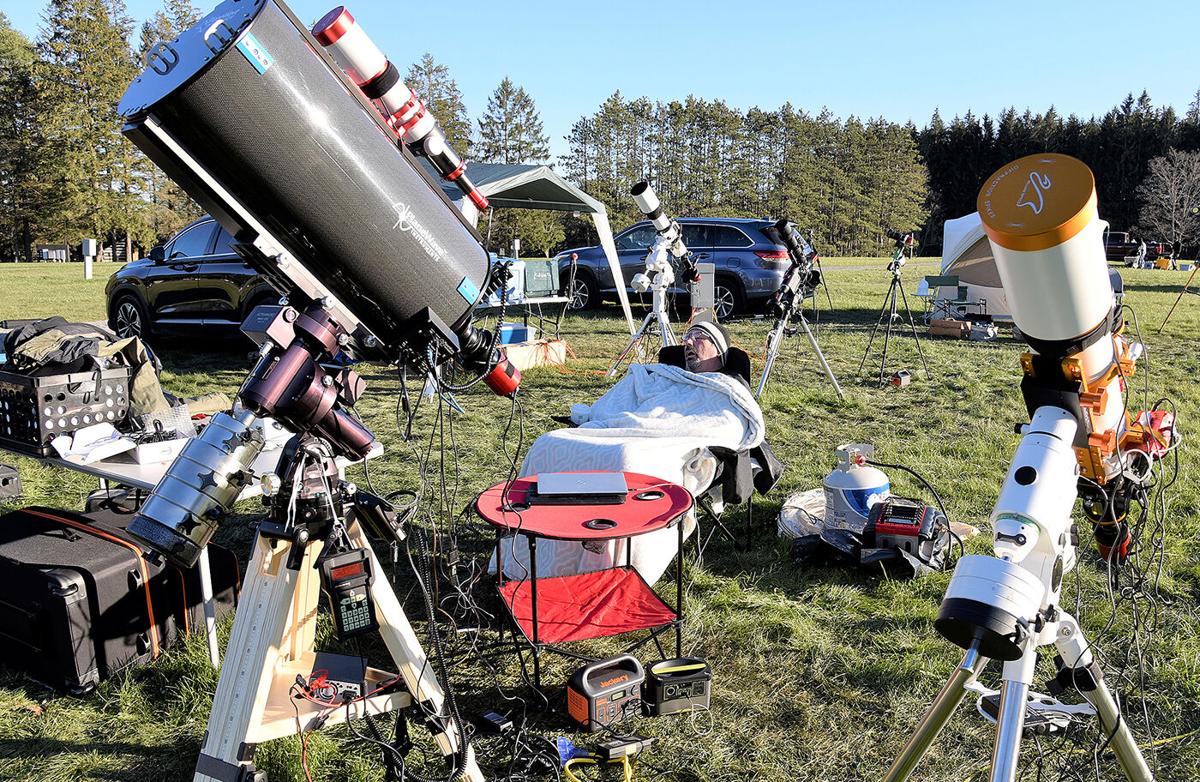 An astrophotographer dozes among his equipment at Cherry Springs State Park in Pennsylvania after shooting deep-sky objects all night. 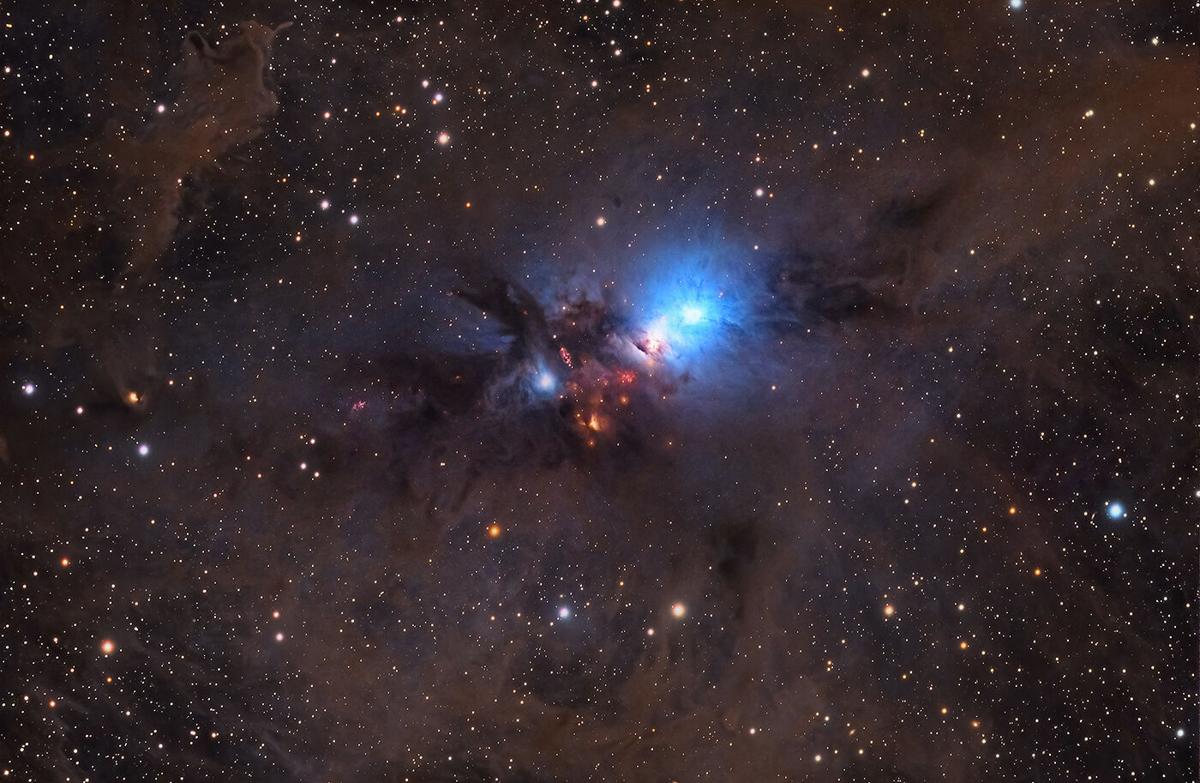 This image of the Embryo Nebula, located 1,000 light years away from Earth, was taken at Cherry Springs State Park in Pennsylvania by layering hours of images from a telescope and camera. The bluish hues are starlight reflected by interstellar dust. 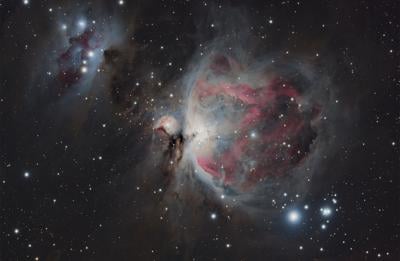 During the day, there’s no especially compelling reason to visit Pennsylvania’s tiny Cherry Springs State Park. It’s little more than a former airplane landing strip carved from a mountaintop in the sparsely populated and heavily forested northcentral part of the state.

But after dusk, a dark curtain drops on the 82-acre open space, revealing a canvas of night sky wonders the likes of which can be viewed in few other places on Earth.

Cherry Springs, about 60 miles due north of State College, at the very edge of the Chesapeake Bay watershed, is rated the best place in the eastern U.S. to view a truly dark sky — something only 10% of Americans have experienced. In 2017, Smithsonian magazine ranked it among the eight best places in the world for stargazing, along with remote spots in Chile, the Canary Islands, New Zealand, Hawaii, Namibia and Canada. It was the International Dark-Sky Association’s first Gold Tier park.

It is a mecca for astronomers, astrophotographers and anyone drawn to stargazing — a go-to spot for seeing the celestial wonders routinely visible to our ancestors but now drowned out by light.

With no “light pollution” from the few nearby towns to wash out the night sky, the Milky Way, nebulae, constellations, meteors, the aurora borealis, the International Space Station, Andromeda galaxy and other star attractions are visible to telescopes, binoculars and even the naked eye.

“You come here to learn, and you come here to gaze into the heavens like you haven’t seen before,” Brandon Lewis of Woodbridge, VA, told me as he set up set up two high-tech telescopes, a camera and two laptop computers that he would use to photograph two different nebulae over two nights.

No sooner had the sun set than a mass of white, like exploding clouds, rose among the evergreen trees. They weren’t clouds, of course, but stars, gas and space dust that collectively appear as translucent white to our eyes. Think 400 billion stars or so.

Even though temperatures had fallen into the 20s, about 100 people, many of them families, made their way into the Night Sky Public Viewing Area fashioned from the old unpaved runway. They sat in portable chairs cocooned in blankets or lay flat on the ground wrapped in sleeping bags. All had their eyes toward the sky.

Shouts of glee perforated the chilly night air. “I just saw one!” a woman squealed at the sight of a meteor. “Oh, look at the Big Dipper!” said another. I looked and the dipper was upside down, seemingly pouring stars into the night sky. I had never seen the constellation so enormous.

“In most cases, they’ve seen the moon and a bright star or two and that’s it. They see the Milky Way and go crazy,” said Curt Weinhold, a photographer from nearby Coudersport who gives dark-sky photography lessons.

The only artificial light came from the occasional glow of a red-filtered flashlight or lantern. White light is banned in the field because it can compromise a person’s night vision for up to 15 minutes. Great mounds of dirt have been placed beside the parking lot to keep headlights from spoiling the star party. Even the bulbs in the restroom are red.

One knot of stargazers represented about 18 members of a Philadelphia outdoors group called It’s Better Outdoors. “This makes you realize how small we are and how big the universe is,” a woman from the group said, briefly interrupting her focus on the sky. “We’re just a speck of time.”

For much of its existence, Cherry Springs was one of the least-used state parks in Pennsylvania. It had no trails, few trees and only a primitive campground.

“Beyond the Woodsmen Show, which draws 6,000 to 8,000 people in August, it was not an exciting place to be,” said park manager Scott Morgan.

Then, one weekend in the mid-1990s, former park manager Chip Harrison was driving home from visiting his mother and spied someone with weird equipment camping in one of the fields.

The man said he was looking for a dark sky so his telescope could view otherwise hidden wonders. Intrigued, Harrison met again with the man, who produced a light pollution map showing a dark blob in northcentral Pennsylvania. Cherry Springs was right in the middle.

Harrison, who had been seeking a way to bring more people to the area, took the stargazing ball and ran with it.

Recognizing the preciousness of the untainted night, the state Department of Conservation and Natural Resources in 2000 designated Cherry Springs as its first and only dark-sky state park. A number of night amenities and public programs — viewing events, laser-guided night-sky tours and night-sky photography workshops — have been added through the years to secure its place among the best dark-sky places to visit.

Such a starry-eyed reputation has created some confusion for the public.

“Some people think it’s a movie, so to speak,” Morgan said. “We’ve had people ask when we are going to turn on the northern lights.” Another well-traveled story involves a visitor who showed up at the park office to complain that he had just visited Cherry Springs and there was no dark sky. It was in the afternoon.

On one side of PA Route 44 — designated in 2019 by the state as “Highway to the Stars” — is the Night Sky Public Viewing Area. Here, the general public can set up and stargaze all night. For free.

On the other side of the highway is the Overnight Astronomy Observation Field. This area is used by more serious stargazers with telescopes, and particularly by astrophotographers who use combinations of cameras, computers, telescopes and rotating tripods.

It’s serious business on this side of the road. Users pay a per-night fee and have access to electricity, Wi-Fi and randomly scattered concrete pads for their expensive equipment. At dark, a shrouded gate closes to keep people from driving in and spoiling exposures. If you turn on so much as a dome light in your vehicle, be prepared to be peppered with outrage. It’s not uncommon for these high-tech folks to doze in camp chairs during the day, then tend to their equipment all night.

Take John Sojka, who works for the federal government in space intelligence and is a part-time “solar system ambassador” for NASA. Over several nights, he and three friends, who dub themselves the Astro Bros, would probe deep space with high-tech telescopes, capturing Hubble-quality images of objects not visible to the naked eye.

Even one visit to Cherry Springs tends to make you ponder human existence and our place in the universe.

“Whenever I’m looking at stars here or at home, it just kind of blows my mind that what I’m looking at happened so far in the past that the star I am looking at might not even be there anymore,” said Caelan Chapman, 23, of Mechanicsburg, PA. “There is an incredible sense of scale to everything. We are so tiny and insignificant.”

For his friend, Olivia Christopherson, there is solace in the infinity of space. “It’s a different kind of peace, it’s a different form of nature,” she said. “We’re all part of it, and it’s part of us.”

It was a spiritual experience as well for Jo-Ann Sun, a recent graduate of the University of Pennsylvania who was enjoying her second visit to Cherry Springs. “I think I’m already a fairly spiritual person and it just made me feel more connected with humanity as a whole,” she said. As on her first visit a year ago, Sun did not bring binoculars or a telescope. She roamed around the field, visiting other stargazers, who were more than willing to show her views and images their equipment was recording.

“At the very least,” she assured a first-time visitor, “tonight, when you see the sky, it will give you an immense appreciation for just being alive.”

Cherry Springs State Park is located at 4639 Cherry Springs Road, Coudersport, PA. The park is always open and, with the exception of the Overnight Astronomy Observation Field, admission is free. For information, visit the state parks web site and click on "Find a Park" to look up Cherry Springs or call  814-435-1037. No pets or drones are allowed. You may or may not have cell service.

Accommodations: There is a 30-site primitive campground at the park, open April through October. You should make reservations well in advance. Go to the park website or call 1-888-727-2757. Nearby Lyman Run State Park also has primitive camping. Private rooms are available at nearby lodges, motels, cabins, house rentals and “glampgrounds.” Visit visitpottertioga.com/stay.