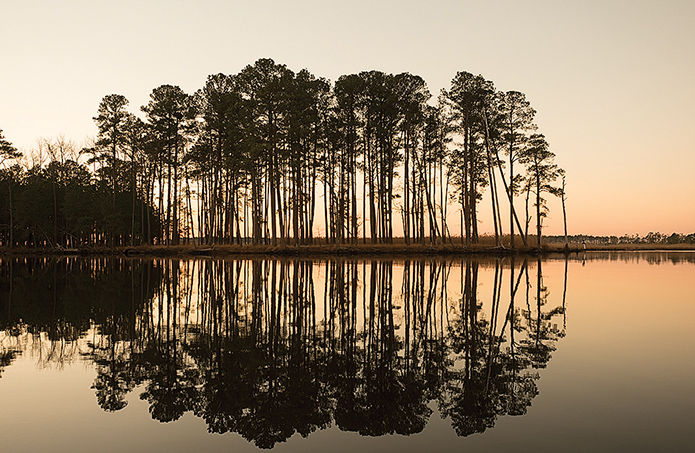 Most of the pollution in the Chesapeake Bay and its rivers comes from nonpoint sources such as agriculture and stormwater runoff from developed land. 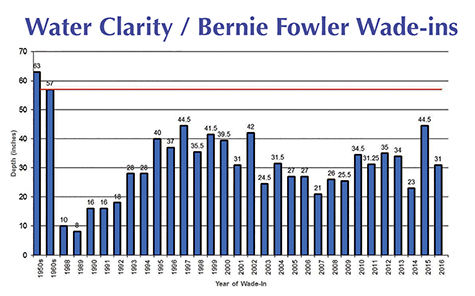 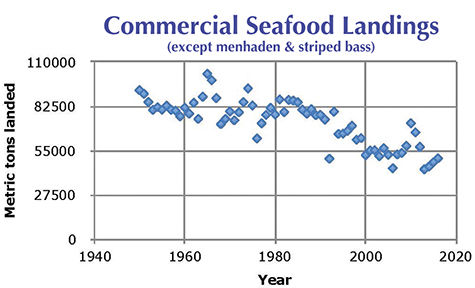 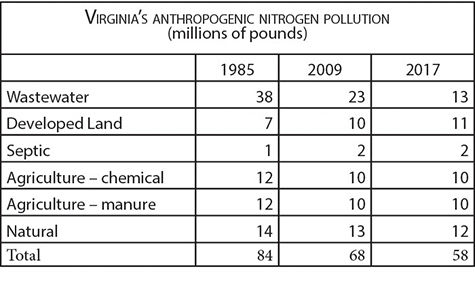 Despite decades of concern, beginning seriously with the passage of the Clean Water Act in 1977, water quality improvement in the Chesapeake Bay after 40 years is disappointingly small.

Most of the action has been focused on reducing urban point-source pollution. The reason water quality has not improved significantly is simple. The largest source of pollution, inefficient crop fertilization, has never been meaningfully addressed. That conclusion applies to water bodies worldwide, including the Great Lakes and the Gulf of Mexico.

Farmers, supported by the powerful agricultural lobby, seek to maximize their harvest (profit) without paying for the pollution they cause. Society benefits from the cheap food they produce. Most of the grain produced in the Bay watershed feeds animals raised for meat, not humans.

At least four metrics can be used to gauge Bay water quality.

But we need to be realistic. Some believe the Bay once had about 600,000 acres of SAV. In the mid-1980s, acreage had declined to less than 40,000, which has now slightly more than doubled.

We can never “restore” 600,000 acres of SAV because the Bay can never revert to its original forested condition that supported a few native communities. Improvement is possible, but not restoration. Use of the word “restoration” should always raise the red flag of unrealistic expectations.

Plus, nobody is certain that the recent improvement in SAV acreage is permanent; SAV acreage has flip-flopped in the past. Additionally, most of the recent SAV increase is from low– or intermediate-salinity species, while eelgrass — the most critical species in the Lower Bay — continues to decline. A 2017 paper in the journal Global Change Biology stated, “eelgrass area has declined 29 percent in total since 1991, with wide-ranging and severe ecological and economic consequences. Declining clarity has gradually reduced eelgrass cover the past two decades, primarily in deeper beds where light is already limiting. In shallow beds, however, reduced visibility exacerbates the physiological stress of acute warming, leading to recent instances of decline approaching 80 percent.”

Water Clarity: The famous “Bernie Fowler Wade-In” or “sneaker index” — the depth in inches below the surface where his white sneakers can no longer be seen — may not seem very scientific, but has been heralded by National Aeronautics and Space Administration as being a reasonably accurate yardstick. (See NASA scientists deem Fowler’s wade-in data out of this world, June 2017.) Meanwhile, increased water clarity is unproven.

Volume of the Dead Zone: A 2011 study concluded “Evaluation of a 60-year record of hypoxic volumes demonstrated significant increases in early summer hypoxia (low oxygen), but a slight decrease in late summer hypoxia.” A small decrease in the volume of anoxic water in late summer was confirmed in a 2018 study. But the volume of the dead zone remains huge in summer, and the improvement, if it persists, is small.

Commercial Seafood Landings: National Marine Fishers Service data show landings for all commercial species, excepting striped bass and menhaden because they are regulated, to be steadily decreasing after the initiation of data collection in 1950.

A similar, albeit anecdotal, argument can be made for recreational fishing. Decreasing fish populations reflect changes in benthic and pelagic food sources, including more harmful algal blooms caused by nutrient overload. Most menhaden are now being caught offshore and fewer are caught in the Bay. One can argue that the same water quality issues that cause reduced commercial landings of other species in the Bay also apply to menhaden in the Bay, and are not the result of overfishing.

What must be done to ensure that all of the metrics improve significantly, indisputably and permanently? The answer is the same worldwide — fertilize more efficiently so crops use more of the applied nutrients, thus reducing environmental nitrogen and phosphorus pollution.

All scientific publications stress that continued nutrient reduction is necessary if additional Bay water quality improvement is to be realized. Reduced nutrient pollution cannot continue to focus on urban areas. That low-hanging (expensive) fruit has already been picked.

Reducing pollution from chemical crop fertilization is necessary, although many complex issues are involved. How many people know that conventional chemical fertilization efficiency is typically no better than about 65 percent when the fertilizer is applied at the time of planting?

Fertilizer application should closely match plants’ needs throughout the growth cycle. This has been expressed as the “4 Rs” – apply fertilizer from the Right source at the Right rate, at the Right time and in the Right place.

That is easier said than done. Applying fertilizer in increments as the plants grow is more efficient than a single-application at the time of planting. Controlled- (timed-, delayed-, stabilized-, encapsulated- or slow-) release fertilizers can significantly increase fertilization efficiency, but they are more expensive. Could they be subsidized?

Chemical crop fertilization will always be “leaky,” but it can be made much more efficient. Modern encapsulated fertilizer, on-the-go variable rate applicators and strains of grain that scavenge nutrients and use less water can raise fertilization efficiency considerably. Rotating a variety of crops, producing biofuels from perennial crops instead of corn as well as requiring riparian buffers can also considerably reduce nutrient pollution.

If the efficiency of chemical fertilization can be improved and point source pollution has been reduced nearly as much as is reasonable, the massive pollution from the disposal of manure by land application remains. Manure is an extremely inefficient fertilizer because the nutrients nitrogen and phosphorus must be released from organic compounds by microbes in order to be available to the crop. Nothing can be done to change that or to increase the efficiency of the fertilizer. When sewage sludge is applied to land in Virginia, it is assumed that 30 percent of the nitrogen will be available to the crop. Most of the remaining 70 percent of the nitrogen causes pollution, amounting to hundreds of pounds of nitrogen per acre.

The phosphorus “cap” is astronomical, so all of the phosphorus is disposed whether the crop needs it or not. Lawmakers are obviously more concerned with the profits of the manure producers and a very few farmers than they are about water quality. They need to be held accountable.

Current permissive and complex regulations that permit phosphorus disposal in excess of crop needs are merely excuses for cheap waste disposal and should be replaced by something simple, like “The land application of poultry litter, sludge and manure shall be limited to supplying the phosphorus needs of the crop, based on a soil analysis for phosphorus.”

This waste can be a source of methane (natural gas) that will not contribute to global warming, even from a properly designed landfill. An excellent example is the District of Columbia’s gigantic Blue Plains Advanced Wastewater Treatment Plant, where methane produced from sludge provides a third of their power.

Phosphorus must be recovered from the waste rather than squandered and cause pollution because the nation’s phosphorus reserves will be exhausted within the lifetimes of children being born today. Land application is currently the cheapest way to dispose of manure, but only because the cost of pollution is not accounted for.

Urban areas bear most of the burden of Bay nutrient reduction because wastewater and stormwater are regulated. Bay water quality can only improve significantly when the largest source of pollution, crop fertilization, becomes much more efficient.

The easiest way to advance that goal is to limit the disposal of manure by land application to the phosphorus needs of the crop. Disposing of phosphorus in excess of crop needs guarantees pollution while protecting the profits of the manure producers.

Every study concludes that the worth of a healthier Bay based on the value of seafood, recreation and property far exceeds the worth of the most highly polluting agricultural entities. Anyone, including nongovernmental organizations and elected officials, who wants real improvement in Bay water quality should actively advance the strategy to ban manure.

Unless there is a groundswell of focused opposition to the most easily addressed source of substantial Bay pollution, the land application of manure will continue for the usual political reasons, and improvements in Bay water quality will remain small.

Dr. Lynton S. Land is emeritus professor of geological sciences at the University of Texas in Austin and now lives in Ophelia, VA. His website is VABayBlues.org.