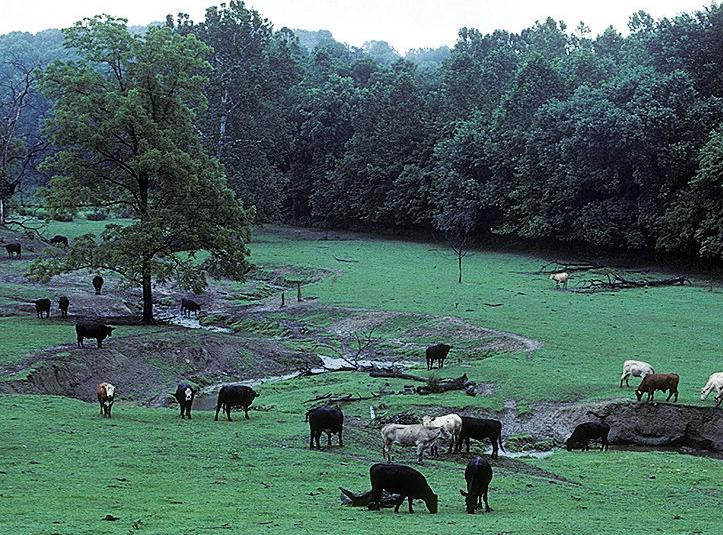 Water-polluting nutrients from farmland originate in manure that has been applied to fields as fertilizer or directly from animals with access to streams. To meet Chesapeake cleanup goals, Maryland, Pennsylvania and Virginia will need to ramp up farm conservation practices to unprecedented levels. 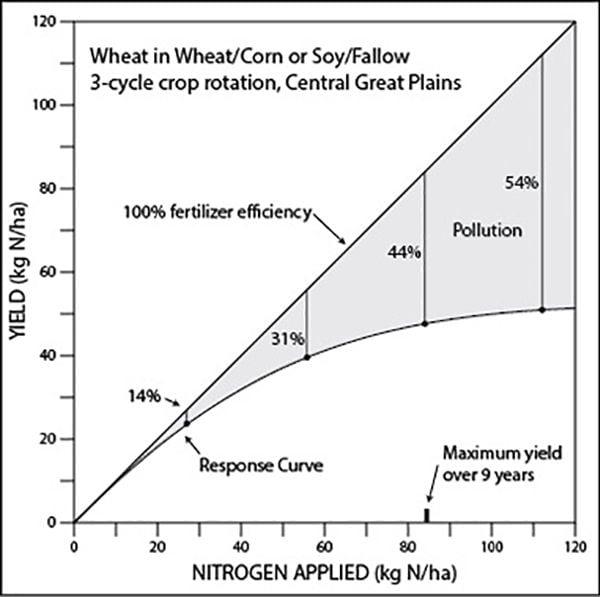 A “response” curve depicts what happens as nitrogen is applied to a crop. The applied nitrogen in kilograms per hectare (about the same as pounds/acre) is plotted horizontally versus the nitrogen taken up by the crop using the same units. The values are identical along a sloping line labeled “100% fertilization efficiency.” This result can never be achieved. The curve, which is typical, depicts observed nitrogen uptake by the crop as the amount of applied nitrogen increases. The gray area between the curve and the sloping line is potential pollution. The higher the rate of nitrogen application, the higher the pollution. (Submitted by Lynton Land)

Gerald Winegrad’s Bay Journal Forum piece, 36 years after first Bay Agreement, its restoration is still a pipe dream, (January-February 2020) should be required reading for anyone concerned about the health of Chesapeake Bay. As a knowledgeable retired Maryland legislator, his guest entry in Howard Ernst's book Fight for the Bay, states that his most regrettable failure was not to require mandatory controls on agricultural pollution, the largest single factor causing the Bay's decline (my emphasis). He states that his legislative pushes between 1989 and 1994 could not overcome opposition from “the farm community, the agricultural lobby and their supporters in the government.”

Society needs to understand the Bay’s problem in simple, accurate terms. The science is sound, the politics is in the way. Most of the nitrogen and phosphorus pollution in the Chesapeake Bay, and other bodies of water worldwide, is caused by inefficient crop fertilization. No fertilization process can be 100% efficient so it is impossible for all of the nitrogen and phosphorus applied to end up in the crop. Some pollution is inevitable. Farmers do not pay for the pollution they cause. In economic terms, the cost of pollution is an “externality” — the economic consequences of fertilizer not sequestered in the crop affects other parties but is not accounted for. Simply stated, farmers seek to minimize their costs and provide society with the cheapest possible food while avoiding economic consequences for the pollution they cause.

In the case of chemical fertilizer applied only at the time of planting, no more than about two-thirds is sequestered in the crop. Given a fertilization rate of 185 pounds of nitrogen per acre (for the maximum yield experienced over nine years in the diagram), about 80 pounds of nitrogen per acre were released to the environment each year. Imagine sixteen 50-pound bags of 10-10-10 fertilizer, each of which contains 5 pounds of nitrogen, being dumped in the Bay for every acre of corn or small grain grown in the watershed, and you get an idea of the massive nature of nutrient pollution when this fertilization practice is used.

An alternative to applying fertilizer only at the time of planting is to apply it at one or more times during the growth of the crop, commonly called “split fertilizer application” or “side-dressing.” This practice uses less fertilizer, but the farmer must weigh the reduced cost of fertilizer against the time, fuel and wear-and-tear on the machinery caused by more passes through the field. Farmers obviously don’t want to waste money on fertilizer that will not benefit the crop, but farmers do tend to be optimistic about crop yields and often fertilize with hopes of “bumper” crops. Thus they usually err on the side of high fertilization rates, often resulting in high pollution rates. I have found few reliable data on private farm fertilization practices.

The most highly polluting form of fertilization is the disposal of animal waste (poultry litter, municipal sewage sludge and manure) by land application in the guise of “free fertilizer.” All of the verbose, complex and highly permissive laws in Bay watershed states that govern the disposal of animal waste by land application should be replaced by a single sentence that would protect water quality instead of continuing to permit the cheap disposal of the waste: “The land application of poultry litter, sludge and manure shall be limited to the amount of phosphorus necessary to support growth of the next crop based on a soil analysis for phosphorus.”

As Winegrad stated, such a simple requirement would meet violent opposition from “the farm community, the agricultural lobby and their supporters in the government” (especially politicians who receive contributions from the agricultural lobby) because it would require a lot of additional acreage to dispose of the waste onto soils that already contain phosphorus.

Also, because that low application rate could no longer supply the nitrogen needs of the crop, additional chemical fertilizer would be required. Bay pollution would be significantly reduced by this single simple action because, unlike existing regulations, it prioritizes water quality.

Until the technology evolves to recycle phosphorus economically, excess animal waste could be disposed in dedicated landfills designed to harvest methane. The nation’s reserves of phosphorus ore will be consumed within the lifetimes of children being born today and then phosphorus will need to be supplied from Middle Eastern countries. We would be wise to use phosphorus sustainably now rather than continuing to pollute water bodies like the Bay and forcing our successors to face running out in the future.

In the case of chemical fertilizers, “precision farming” machines that measure a plant’s health “on the run” and apply only the needed fertilizer are being developed. But how long will it take for them to be available and affordable to the average farmer? How much will they reduce pollution rather than just increase crop yield?

A readily available option today is to use “encapsulated” (slow–, timed– or controlled-release) fertilizers that provide nutrients as the crop grows, and should be exhausted after the crop has matured and is drying in the field. These kinds of fertilizers are expensive and not fully responsive to unpredictable growth rates caused by uncertain temperature, rainfall etc. They can never be perfect, but they can certainly significantly reduce chemical fertilizer pollution. Could they be subsidized? Imposing a federal “pollution tax” on conventional chemical fertilizer (good luck!) would encourage alternatives.

Volunteerism to control nutrient pollution has been ineffective, even for simple, obvious actions like fencing animals out of streams. It is past time for the enactment of regulations that meaningfully address pollution from crop fertilization. Reliable data must document the improvements, not just pie-in-the-sky words from biased practitioners.

Society must recognize that its choices regarding food and elected officials bear on the state of the Bay. Is society willing to pay more for meat so that animal waste can be responsibly disposed of without water pollution? Is society willing to eat more plants rather than killing and eating the animals that eat the plants and then produce the manure?

Society must be willing to point an accusatory finger at itself and actively demand rational solutions to this well-understood problem, and be willing to pay for them.

Dr. Lynton S. Land is emeritus professor of geological sciences at the University of Texas in Austin and now lives in Ophelia, VA. His website is VABayBlues.org.

Help! The chart doesn't correlate to the narrative; it is in Kilograms per Hectare, the the text is in pounds of Nitrogen per Acre. How does the "9 years" fit into the narrative?