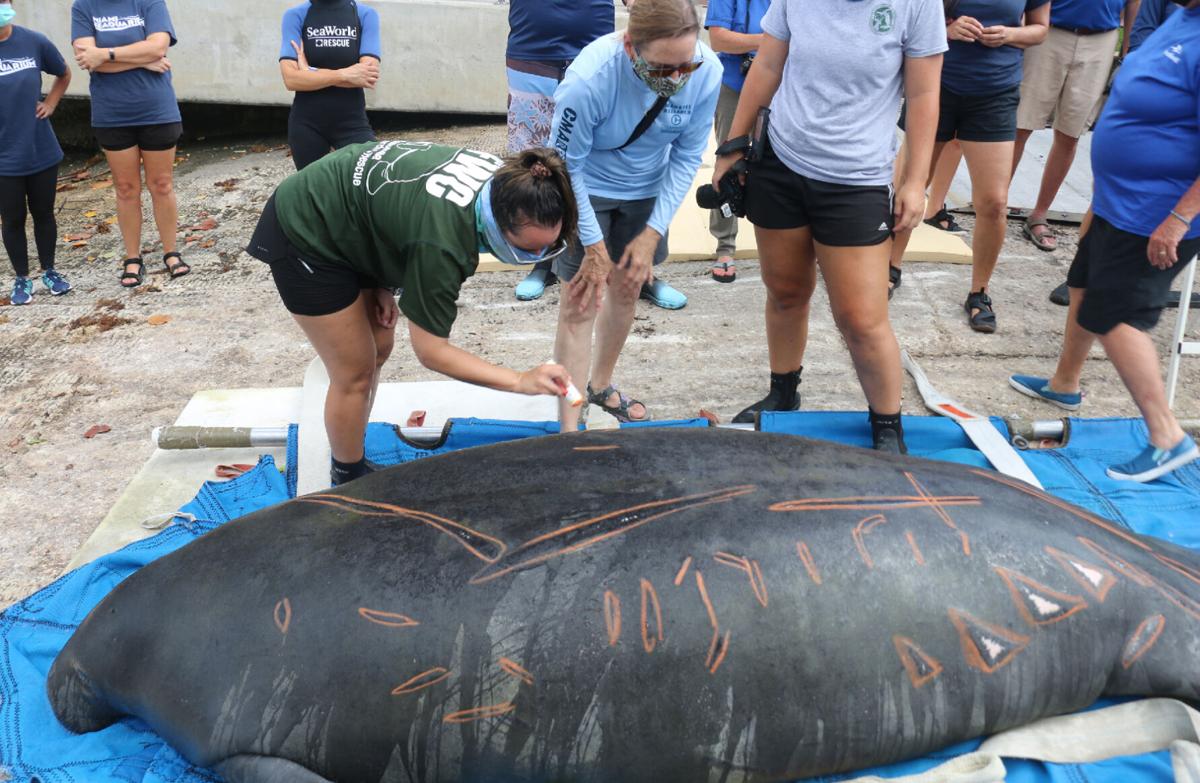 Staff with the Florida Fish and Wildlife Conservation Commission use a grease marker to highlight a scar pattern on Chessie, a manatee known for his forays into the Chesapeake Bay. The agency photographs scar patterns to help track individual manatees over time and examine life history traits of the population. 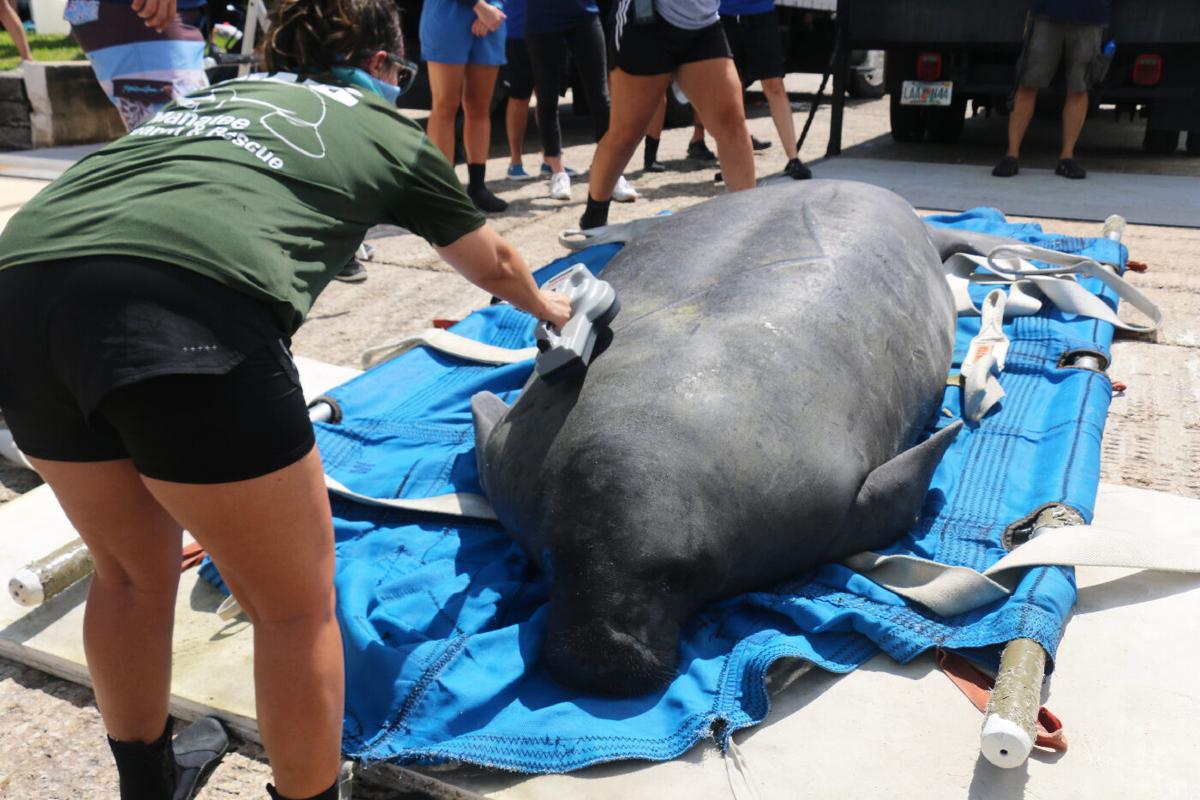 Chessie, a manatee who has occasionally visited the Chesapeake Bay, is scanned for a passive integrated transponder tag. PIT tags, commonly referred to as microchips, are about the size of a rice grain and are widely used by veterinarians to help identify lost pets and return them to their owners.

Florida wildlife officials on Feb. 5 rescued an 1,100-pound male manatee in Florida after he was spotted swimming sideways, a signal of distress. Suffering from malnutrition and severe pneumonia, he was taken to SeaWorld Orlando for rehabilitation.

A record number of manatees has perished in Florida this year in what experts are calling an unprecedented die-off. Marine scientists say most of the 890 deaths, as tabulated through July 30, are linked to a massive decline in seagrass on the state’s East Coast that has robbed the gentle mammals of their primary food source.

But in this case, rescuers soon realized they had just saved an icon. A decade after his last confirmed sighting anywhere, Chessie the manatee — famous for his northerly treks to the Chesapeake Bay — was still alive.

The distinctive scars on his back betrayed his identity as the manatee that stunned the scientific world in 1994 with his first foray into the Chesapeake, for which he was named. At the time, he was the first documented manatee to be spotted in Maryland.

His renown was heightened by two more confirmed sightings in the Bay in 2001 and 2011.

Was this to be the end of Chessie’s far-wandering ways? Not quite. In fact, not long after his release into the wild last May, the manatee, who is believed to be at least 35 years old, showed he has quite a bit of life left in him.

“He very quickly made tracks north,” said Monica Ross, a senior research scientist at the Clearwater Marine Aquarium, which had attached a satellite tag to the manatee to track his whereabouts. The public could also follow his movements on a website operated by the aquarium.

“To me, Chessie is the rock star of manatees,” Ross added. Before his inaugural Chesapeake appearance, “most people had no idea that manatees went farther north. As researchers, we did. But he was the first one to get a track farther north and to get a track on the way back.”

Typically, manatees are found in the warm waters of Florida and the Caribbean Sea. When water temperatures drop below 62 degrees, they start showing signs of cold stress, a potentially fatal condition.

But during the summer, some manatees venture northward. Ross’ long-running tracking study, for example, has counted at least 14 individuals that return each year off the coast of Charleston, SC.

“Manatees are exploratory animals,” Ross said. “If they find a habitat they like, they will come back to it.”

Over the past two decades, manatees have been occasional summertime visitors in the Chesapeake Bay. But Chessie was the first.

After he was spotted the first time in the Maryland portion of the Bay, officials grew worried he wouldn’t make it back to Florida in time to beat the winter weather. So, after a brief stay at the National Aquarium in Baltimore, they booked him a flight home aboard a military transport plane.

Curious whether he would try the trip again, researchers outfitted Chessie with telemetry gear upon his release. Sure enough, he was back to his old tricks in 1995. This time, he journeyed as far north as Rhode Island, marking the first time a manatee had been confirmed north of the Chesapeake Bay.

Chessie’s exploits transformed him into a media darling and the subject of at least two children’s books. But after the sightings in 2001 in Virginia and 2011 in Maryland, all was radio silence.

Between then and Chessie’s reemergence this year, much had changed for the species.

In 2017, the U.S. Fish and Wildlife Service downlisted the manatee from endangered to threatened. But wildlife biologists and others remained concerned about a rising death toll from boat collisions. Then, last winter, manatees began dying by the hundreds. The suspected cause: a vast loss of seagrass due to polluted waters off Florida’s coast.

More than 10% of the state’s population of manatees, as calculated by the federal Fish and Wildlife agency, is believed to have been wiped out during the “unusual mortality event.” The deaths and rescues have slackened in recent months as warmer temperatures have allowed the lumbering creatures to travel more widely to munch seagrass beds elsewhere, according to the Florida Fish and Wildlife Conservation Commission.

But Ross and others worry that this winter will bring another widespread die-off.

“Seagrass is not going to grow back for years,” she said. “This is going to be a longstanding issue. Manatees are the canary in the coal mine. They’re letting us know how bad it is out there.”

Ross said that the crisis demonstrates the urgency of her work tracking manatee habitat usage outside Florida. She hoped Chessie’s long-haul habits would provide a vital datapoint. But nature had other plans.

Chessie, now tipping the scales at 1,500 pounds, was released May 12 just north of West Palm Beach, FL. By May 23, he had trekked to the mouth of the St. Johns River near Jacksonville, about 300 miles up the coast. Over the next month, the satellite tracker showed him swimming several miles up the river as well as farther north along the coast to within a few hundred yards of the Florida-Georgia state line.

But after the tag sent up a signal near Blount Island in the St. Johns on June 27, there were no more pings. The tag was connected to a float ring that towed behind the large, gray animal. Because the signal was lost in the early evening near a shoreline, Ross said she is “100% convinced” the tag was bitten by an alligator.

“It’s something in the water column and they’re looking for food, so they will bite our tags,” she said.

Where and when Chessie will pop up again is anyone’s guess now. Ross urged anyone who spots a belt-wearing manatee to report the sighting to their state’s wildlife agency.

It might lead to a new chapter in Chessie’s story.