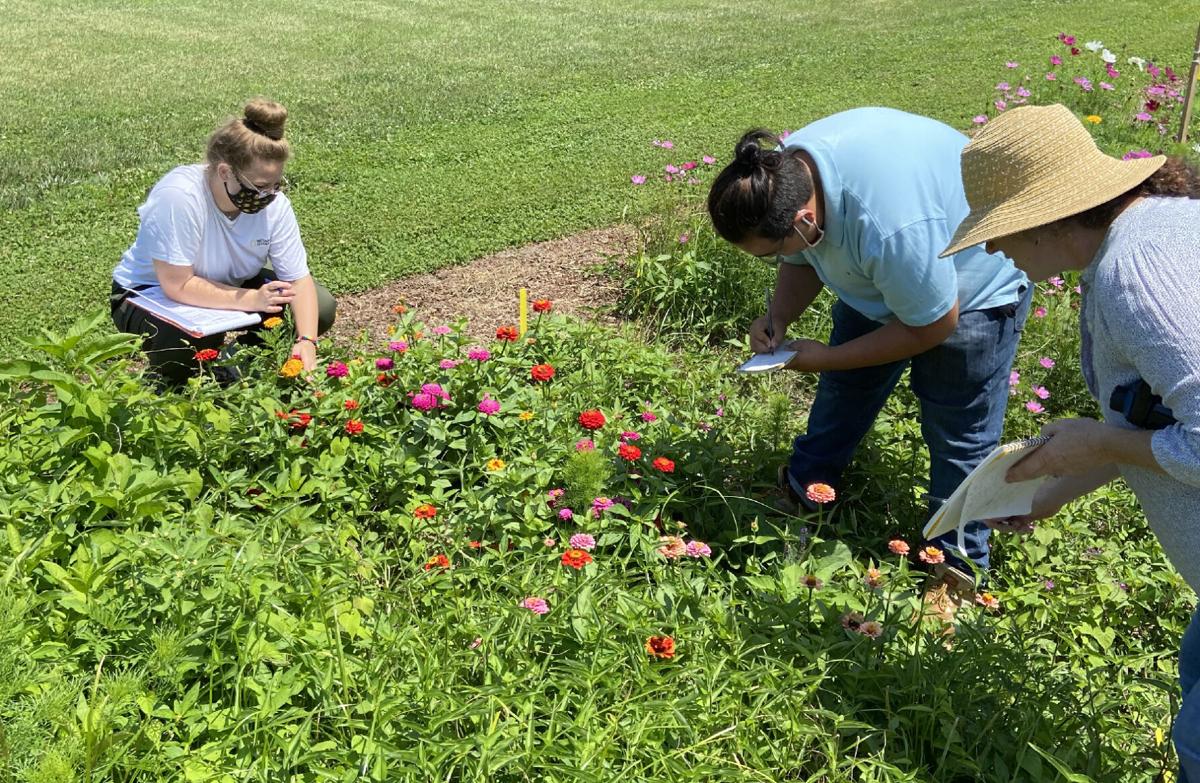 Researchers on the entomology team at Virginia Tech University study the presence of pollinators in an experimental plot planted with native flowers. Shown from left to right are Shannon Bradley, Devin Calpo and Julie Brindley. (Alejandro Del-Pozo) 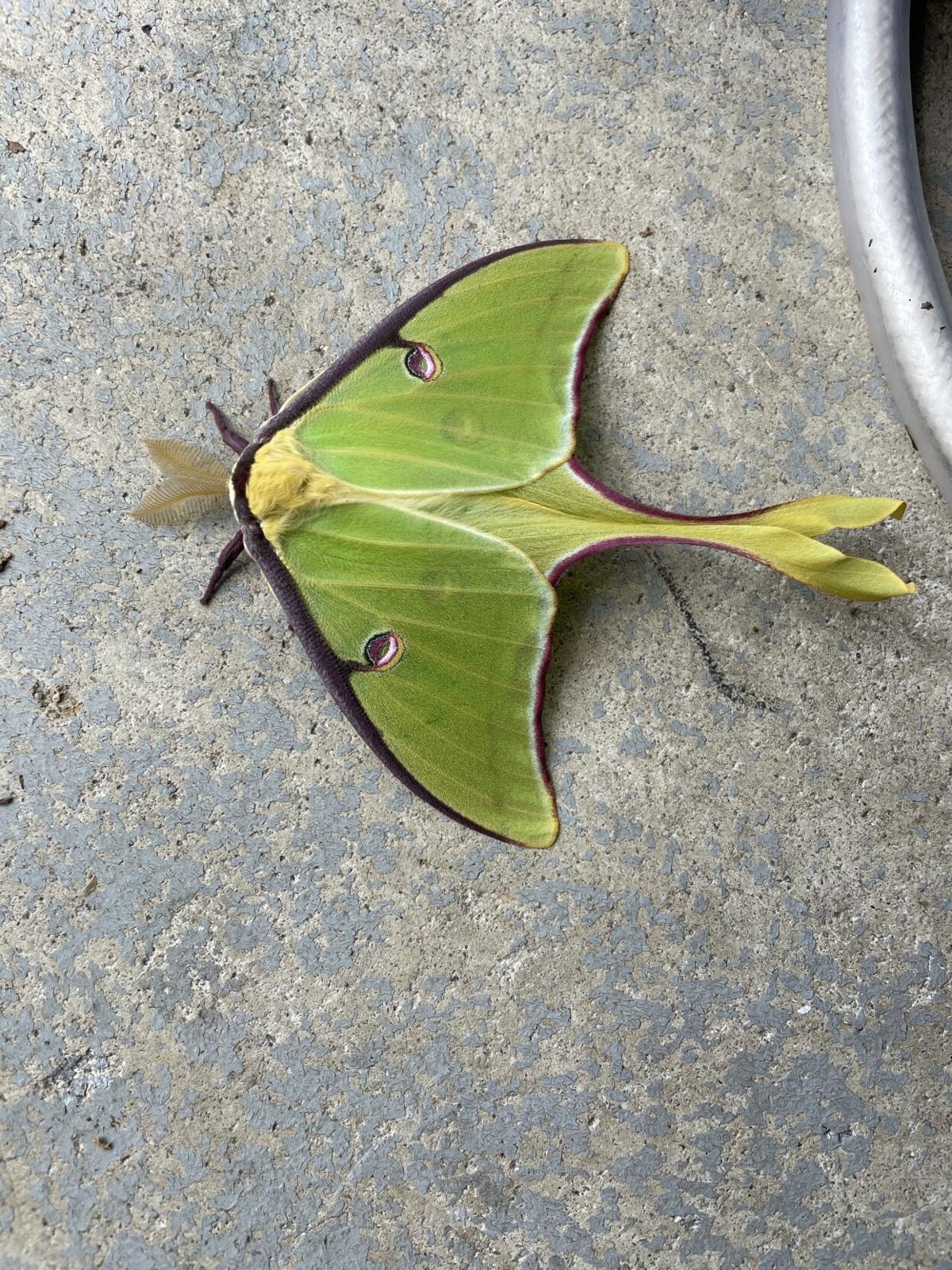 Large silk moths, such as this luna moth pictured in Springfield, VA, are now harder to find in the Chesapeake Bay region.

We hear that pollinators are in dire straits while harmful, invasive insects seem to be proliferating. But how are all the other bugs doing?

In recent years, scientists have begun sounding the alarm on a suspected “insect apocalypse.” Research initially out of Europe suggests that arthropods — a category of invertebrates that includes insects — are suffering steep declines globally in both diversity and abundance.

Half of the one million animal species that scientists predict will face extinction in the coming decades are insects, according to a 2020 paper in the journal Biological Conservation. Granted, there are a lot of insects to begin with — an estimated 5.5 million species globally. The number is so high that only about one-fifth of the species have been named.

Some researchers suggest the dips may be only cyclical or regional but most say there’s no time to waste in reversing troubling trends. And, while local population data is not easy to come by, they say that many of the trends playing out globally are likely occurring in the Chesapeake Bay region. These declines could present obstacles, or at least complications, in the Bay restoration effort, too.

“We know that different places are experiencing different environmental stressors, different climates, different local management,” said Daniel Gruner, an associate professor of entomology at the University of Maryland. “But we can, from these global studies, identify some major threats that are probably pretty universal.”

Many of the factors working against environmental health in general — habitat loss, urbanization and the broad use of pesticides — have an outsized impact on insects. In many ways, insect health is a proxy for that of the overall ecosystem.

“Insects are really good indicators of environmental quality,” said Alejandro Del-Pozo, an assistant professor at the Virginia Tech University Department of Entomology. “If we want to look at the streams and creeks and understand if there is something specific going on ... look at the insects.”

But tracking insect populations can be tricky, and the trends vary widely depending on the region and species. It can also be hard to find historical population data collected using methods similar enough to allow for comparisons across time.

Still, the 2020 paper said that somewhere between 5% and 10% of insect species have been lost over the last two centuries and the rate of loss is accelerating. A 2021 paper published by the National Academy of Science estimated that annual declines in insect abundance are hovering around 1-2%.

Several environmental factors could be putting insects in peril. Habitat fragmentation and destruction can sharply reduce certain populations and lead to co-extinctions — the disappearance not only of a single species but also of one or more that depended on it. Climate change and an influx of invasive species are also thought to play major roles.

And pollution, especially the use of broad-spectrum pesticides, is considered a major culprit. A study published this spring in Science magazine found that the chemical makeup of modern pesticides, though applied in decreasing amounts since the 1960s, has substantially increased in toxicity, particularly for insects and aquatic invertebrates. Those pesticides also harm soil invertebrates such as earthworms, beetles and ground-nesting bees, another study found.

Bonnie Raindrop, program director at the Maryland Pesticide Education Network for the Pesticides and the Chesapeake Bay Project, said she talks a lot about the impact of these chemicals on honeybees and other pollinators.

“But it’s important to connect the dots so that people understand [that] what’s happening to honeybees is happening to every other insect,” she said. “Losing the insect world would have devastating effects for all of us.”

In the Bay region, some bugs are faring worse than others. The number of native ladybird beetles, for example — including New York’s state insect, the nine-spotted ladybug — has greatly declined over the past 30 years.

Meanwhile, populations of nonnative species like the multicolored Asian lady beetle have thrived. These so-called Halloween ladybugs were introduced in North America to consume plant pests. Now, they compete with native ladybugs for food and are known to invade homes in droves in October to overwinter.

Large silk moths, such as the bright-green luna moth, are also much harder to find, one study found. Scientists think this is likely because of another nonnative species: a deadly parasitic fly introduced over a century ago to control gypsy moth caterpillars, but which is now “controlling” hundreds of other moth species.

“I’ve seen only a few over the years,” Gruner said of large moths in the Saturniidae family, such as the red-brown cecropia and yellow-brown imperial. “In the past, we introduced [species to combat unwanted pests] without a lot of testing to see if they would also consume native insects.

Many arthropods play a specific role in a specific ecosystem. That makes them less resilient in the face of change.

Maryland’s state insect, the Baltimore checkerspot butterfly, is one of those specialist insects. Its caterpillars feed almost exclusively on white turtlehead, a wetland plant with large white blooms. But the turtlehead has become rarer as invasive plants, development and sea level rise have transformed many wetland habitats. Maryland now considers the checkerspot to be an imperiled species.

Tyler Rippel, a doctoral candidate at Georgetown University, has been studying how a loss of specific habitats in coastal environments can interrupt the delicate dance of insects in those ecosystems. Many are impacted when a single type of seagrass, for example, takes over a once-diverse wetland.

“People don’t really track this in coastal ecosystems, unless they’re studying fish, oysters or mollusks or some sort of agriculturally important species,” Rippel said. “Not many people care about those insects, so we wanted to point out how they are influencing the environment.”

Gruner said there are winners and losers in the dynamic world of insect populations, with species like Asian tiger mosquitoes thriving in a modern Chesapeake watershed as some native species struggle.

In these scenarios, Gruner said, “Even if total abundance and biomass of insects proves to be steady over time, the underlying biodiversity is almost certainly in decline.”

What can we do to help insects?

Source: “Eight simple actions that individuals can take to save insects from global declines” from the Proceedings of the National Academy of Sciences, 2021.