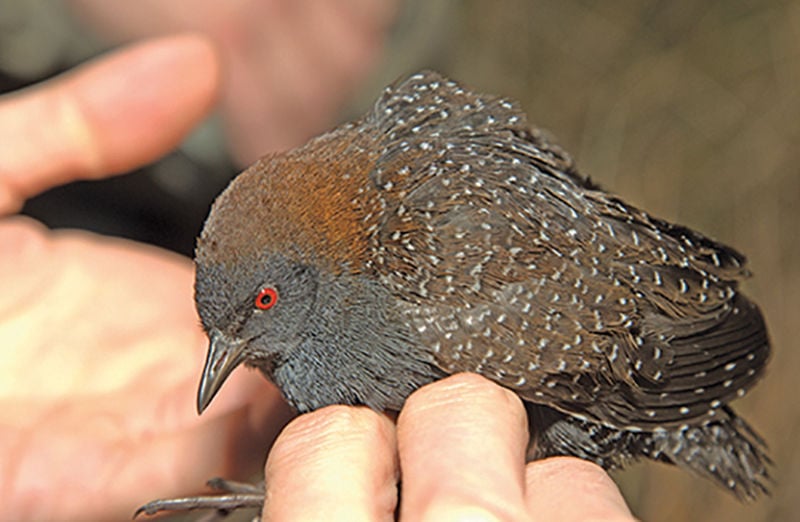 A bird bander holds a black rail. As recently as 1990, the eastern black rail was a common bird found in marshes along the Chesapeake Bay. Now, the U.S. Fish and Wildlife Service, citing the inundation of nests from more frequent storms and increasingly high tides, has proposed listing the bird as threatened. (Woody Woodrow / USFWS) 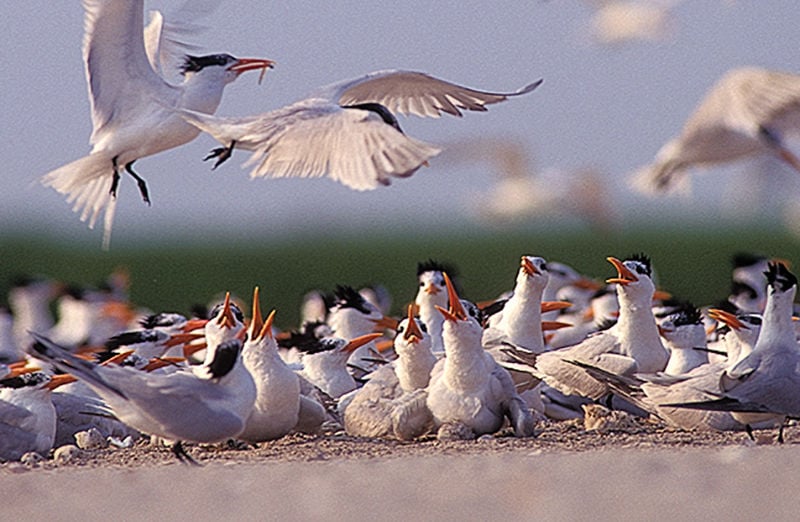 This 2004 photo shows a colony of royal tern on Shanks Island, between Tangier and Smith islands in the Chesapeake Bay. Because the tern nests on low-lying sandy islands, its young are threatened by the high tides and rising sea levels associated with climate change as well as loss of habitat from shoreline development. 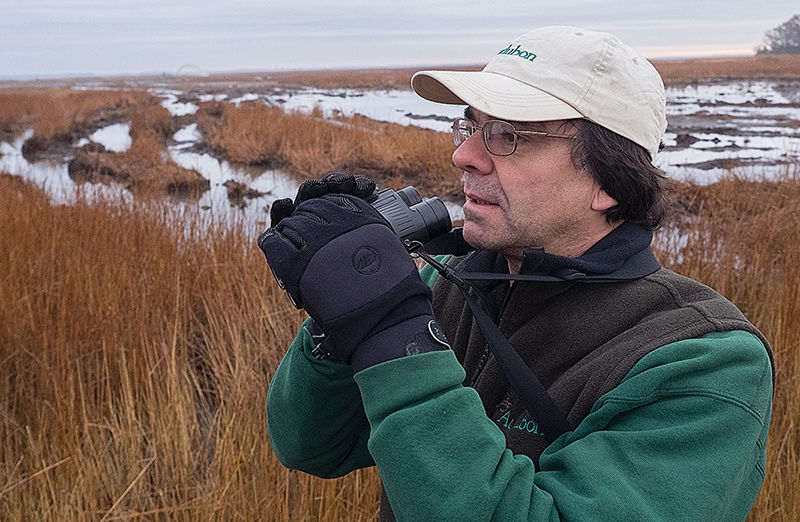 David Curson, director of bird conservation at Audubon Maryland/DC, said that he’s observed the avian decline for some time and that it’s time for people to start “to do things in a better way.” 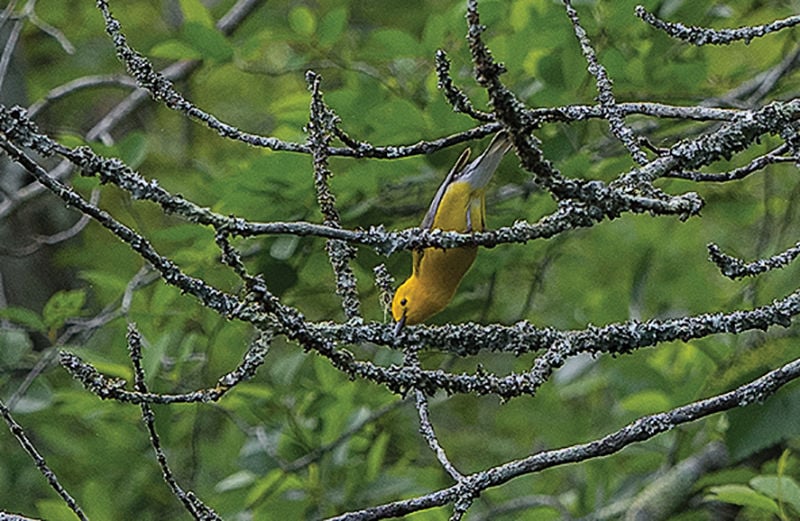 The increase in spring heat waves threatens the nestlings of the prothonotary warbler. Meanwhile, development continues to eat away at its habitat.

It’s hard to imagine a world without birds chirping outside in the morning or during a stroll in the woods. But a new study has found that birds are in serious decline across North America, including in the Chesapeake Bay region.

There are nearly 3 billion fewer birds in North America than there were in 1970 — a 29% decline during a single human lifetime, according to the study published in October by the journal Science. The study was done by eight scientists with government and private bird research organizations in the United States and Canada.

Populations of even the most common species that people see at backyard bird feeders or outside have plummeted — think cardinals, titmice, wrens, goldfinches, house finches, sparrows and blue jays, to name just a few.

The decline of one of the most ubiquitous kinds of wildlife may be the strongest evidence yet that Earth’s ecosystems are in trouble. The study warned that birds, which are widely monitored,  are prime signals of environmental health. Birds are important pollinators and seed dispersers, and they keep insect populations in check. They also drive a considerable economic industry from birdwatchers who feed them and chase them around the country.

The factors that are driving down bird populations are accelerating, and the study warns that, unless those threats are addressed, some species will be in danger of collapse.

“It’s alarming. It makes me feel like we are trashing the planet and we need to do things in a better way,” said David Curson, director of bird conservation at Audubon Maryland/DC. “I’ve seen these trends for quite a few years. This study just kind of brings it all together and lays it out for the public to see that we have really damaged our environment.”

One of the study’s authors, Michael J. Parr, who also is president of the American Bird Conservancy, said the numbers show “the global wildlife crisis has arrived in our backyards.” A National Geographic writer called the bird plummet “a state of quiet freefall.”

The study’s researchers pored over 50 years of annual bird surveys — many by citizen scientists — as well as government counts and radar data from weather satellites that have been used to track swarms of migrating birds at night.

The study found that the Baltimore oriole, so important to baseball fans in Maryland, has dipped by about one-third since 1970.

Among those suffering the most alarming declines are birds that depend on shoreline and marsh habitat, including those that are emblematic of the Chesapeake Bay.

These shorebirds and wading birds around the Bay are currently not threatened but are on the Maryland Department of Natural Resources’ list of birds most in need of conservation: great egret, glossy ibis, brown pelican, laughing gull, least tern and spotted sandpiper.

Together, shorebirds are down by 17 million, or 37%, across North America. Red-winged blackbirds, found around almost any wet spot in Bay country, are down by 439 million.

Most of the bird problems along the Bay are due to climate change, said Bryan Watts, director of the Center for Conservation Biology at the College of William and Mary and Virginia Commonwealth University.

Rises in water levels from a warming planet are burying vital habitat at the water’s edge, he said. “When you look out on the marshes, it looks fairly similar to what it did, but it’s no surprise when you look at the small numbers [of birds] because they can’t produce any young due to inundation.“

Case in point: the eastern black rail, as recently as 1990, was a common bird found in marshes along the Bay. Now, the U.S. Fish and Wildlife Service, citing more frequent inundation of nests from more frequent storms and increasingly high tides, has proposed listing the bird as threatened. A final decision was expected in October.

The largest drop in North American bird populations is among grassland species such as meadowlarks, whip-poor-wills and horned larks. American sparrows, once a common sight in yards, had the largest single falloff in population, at 717 million, or 53%.

The disappearance of grassland birds makes Curson especially sad. “They’re charismatic birds with beautiful songs that used to be a feature of people’s childhood in the landscape in Maryland and elsewhere.”

Not all birds showed declines. Raptors, wild turkeys and waterfowl such as geese and ducks showed large gains. Raptors are protected and waterfowl and turkeys each have dedicated conservation programs, largely paid by hunters, to preserve their habitats. In the Bay region, ospreys, eagles and other birds of prey have actually increased because they have been targeted by multiyear restoration programs.

The results of the study have grabbed headlines, but the researchers did not delve into the reasons for the striking declines. Other scientists and bird experts, though, have a ready list of reasons.

Chief among them is the loss or degradation of bird habitat. Development, forest fragmentation from energy extraction and changes in farming practices all contribute to loss of the habitat that birds need for eating, shelter and migration.

The study noted that all of the main habitats that birds depend on, from grassland to forests to coastal areas, are disappearing.

“Fragmented habitats, like you see in suburbia, make many birds more susceptible to predation — especially nest and egg predators — parasites, disease and changes in climate,” said Aaron Haines, an associate professor of conservation biology at Millersville University in Pennsylvania.

“There has been fairly dramatic urban expansion [during the study’s 50-year period] in the Bay region,” Watts said. “In urban areas, the predator density from cats and raccoons is just too high.”

Plenty of other stressors also are converging to dent bird populations, experts said.

Among them: feral and pet cats that roam outside, climate change that disrupts migration patterns, window strikes, lighted building strikes, cell tower and wind turbine mortality, West Nile virus and pesticides that both kill birds directly and the insects they need for food.

“It’s like death from one thousand cuts. It’s many reasons,” Watts said.

What can be done?

Many experts advocate for people to make their yards more bird friendly by planting flowers, shrubs and trees that feed and shelter birds. After all, lawns make up about 40 million acres across the United States.

While Curson endorses individual steps to help birds, he thinks it will take collective activism by the public to push lawmakers and local government officials to adopt policies that help birds. He especially wants to see a reduction in the use of pesticides and a decrease in greenhouse gases that cause climate change.

“This is a political problem, and this needs advocacy,” he said.

Dan Ardia, who has studied birds at Franklin & Marshall College in Pennsylvania, said, “The most frustrating aspect to me is that many of these impacts can be minimized if there was public will, especially as it relates to cats and to reducing evening lighting in buildings.”

One current focus of conservationists is to get Congress to pass the Recovering America’s Wildlife Act, which would dedicate $1.4 billion annually to states for the conservation of declining wildlife populations, including birds.

Researchers involved with the study noted that the restoration successes of waterfowl, eagles, ospreys and other species show that wildlife can be brought back with legislation and conservation action.

The possibility of a near-birdless landscape shakes the soul of Bruce Carl, a birdwatcher in Akron, PA. “To walk along a trail in the woods and have it be consistently silent no matter where you would go would be very disappointing,” he said.

“I just can’t imagine a time when this would be possible. Hoping that day never comes.”