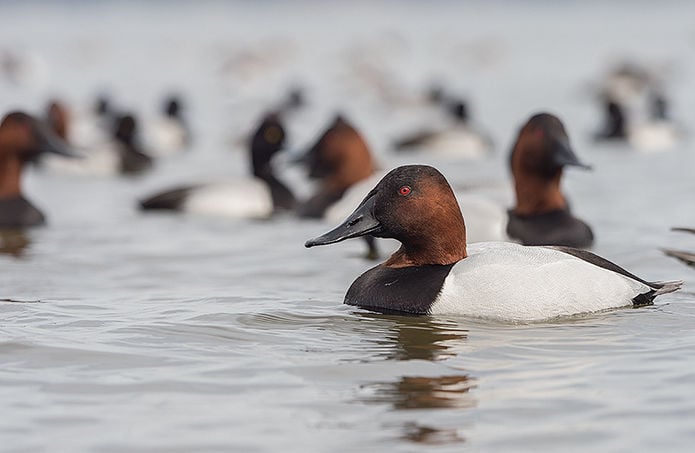 One male stands out in a raft of canvasbacks on the Choptank River in 2016. 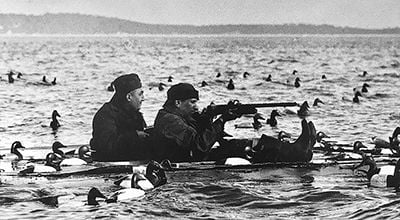 Hunters in a sinkbox wait low in the water for ducks in this photo taken on the Susquehanna Flats in 1950. (Upper Bay Museum) 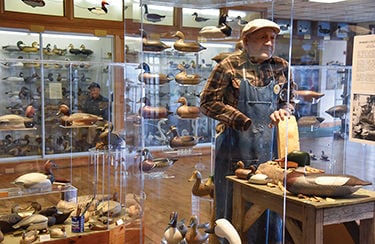 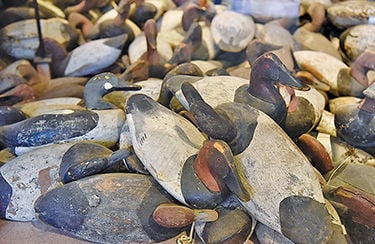 Canvasback decoys in a pile with other duck carvings recall a time when this waterfowl was the object of market hunters. 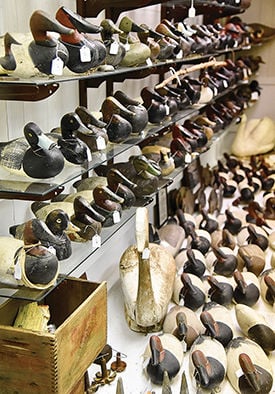 A display of old, mostly canvasback, decoys at the Upper Bay Museum attests to the popularity of the duck among hunters the late 1800s and early 1900s.

On a cold morning last February, Bob Schutsky looked out the dining room window of his home along the Susquehanna River in southern Lancaster County, PA, and spied a raft of tightly packed ducks that made his heart race.

Four days before, 36 miles south at the head of the Chesapeake Bay, Rick Bouchelle glanced outside the Upper Bay Museum in North East, MD, and stared in disbelief at a floating flock of ducks.

“They were so thick in there you could walk on them. There were thousands,” the president of the museum recalled, still with a tinge of excitement.

Both men were thrilled to the bone because they recognized the waterfowl immediately as canvasbacks.

For Schutsky, a well-known ornithologist, it was a notable birdwatching sighting. For the next month, he posted daily updates of the canvasback numbers on a statewide website. As the ranks hanging out in the middle of the river swelled to 515, birders came from far and wide to see a species of waterfowl that once dominated the Susquehanna but had been mostly gone for generations.

For Bouchelle, seeing so many of the handsome diving ducks with their distinctive sloping, rusty red heads was like seeing a ghost, and strong memories of the past welled inside him.

Canvasbacks are birds of lore on the Chesapeake Bay. For almost a century, the Bay was the wintering grounds for at least half of all canvasbacks in North America — about 250,000. Hunting for the large and tasty ducks helped define the Bay’s identity, creating a distinctive culture and representing a big chunk of the economy for towns at the water’s edge.

No part of the Bay was more synonymous with canvasbacks as the Upper Bay and most specifically the Susquehanna Flats. Plant-boosting nutrients and topsoil flushed into the shallow, 25,000-acre flats from the Susquehanna River and created ideal growing conditions for underwater grasses, including wild celery and widgeon grasses — the caviar for migratory ducks. Today, an overload of nutrients and sediment has become a problem rather than a boon, creating algae blooms and smothering grasses. Curbing them is at the core of the Bay restoration effort.

From approximately the Civil War until about 1950, the Upper Bay offered the finest canvasback hunting in the world. Business magnates and celebrities such as Annie Oakley and President Grover Cleveland flocked to area towns and hunting lodges for autumn hunts guaranteed to bring action and gunning without limits.

Some of the largest lodges, including one owned by banker John Pierpont Morgan, were located on what is now the Army’s Aberdeen Proving Ground.

It’s no coincidence that both the Upper Bay Museum and nearby Havre de Grace Decoy Museum sport canvasbacks on their logos.

And, Maryland Del. Mary Ann Lisanti, a Havre de Grace resident, is trying to get the canvasback designated as Maryland’s state waterfowl.

Her first attempt failed but she vowed to continue her quest. “Some things in life take time, and this is no exception,” she said. “I will continue to advocate for preserving our rich cultural history while looking to the future to find innovative ways to link our waterfront communities together.”

They didn’t know it at the time, but the period would make legends of blue-collar decoy carvers on the flats: James Pierce, Harry Jobes, Bob McGaw, Paul Gibson, Charles Joiner and many others, especially R. Madison Mitchell, a funeral home director from Havre de Grace whose decoys now fetch more than $10,000.

Havre de Grace still bills itself as the “decoy capital of the world.”

The wild celery that used to abound in the flats gave canvasbacks a distinctive savory taste. With the invention of refrigerated railroad cars in 1870, the ducks became the preferred wild game delicacy on the East Coast.

In novelist Edith Wharton’s Pulitzer Prize-winning The Age of Innocence, about the bluebloods of New York City in the Gilded Age (1870s–1900s), the protagonists are served canvasbacks and Maryland terrapins, along with fine wines.

Market hunters killed canvasbacks by the hundreds in the morning, and by evening, diners in the finest restaurants in Baltimore, Philadelphia, New York and Boston could feast on the delicacy.

“They were loaded in wooden nail kegs and shipped to restaurants. They weren’t even dressing them out. You were just shooting them and piling ’em up,” Bouchelle said.

The demand for canvasbacks soon spawned a market for weapons that could take the migrating waterfowl in ever-increasing numbers.

Perhaps the ultimate example was the punt gun, a crudely fashioned shotgun approaching the effectiveness of a small cannon. The guns, filling most of the length of low-profile skiffs, were simple guns made from steel pipes and folded into a wood block. They had to be anchored to the skiff to protect shooters from the recoil.

A single blast from their wide shot pattern was capable of taking out 30 ducks or more. One account claimed 54 ducks were killed from a single discharge.

Market hunters would take ducks by any means necessary. Thus, much hunting occurred at night when the ducks were at rest on the water, floating in tight flocks and were, literally, sitting ducks. The boats that sneaked up on them were painted grey to blend in with the reflected moonlight.

Sinkboxes were another effective hunting device. They resembled floating coffins with wings that unfolded when the rigs were moved into place.

When a flock of canvasbacks approached, hunters would jump up and shoot.

Sinkboxes and live decoys were outlawed by the federal government in 1935.

Less elaborate were “sneak” or “bushwhack” boats. A single 10-foot oar protruding from the stern of the boat allowed a sculler to silently propel the boat toward a flock of ducks that had landed in the decoy spread, while two other hunters hunkered down, ready for action.

Market hunting ended abruptly with the passage of the Migratory Bird Treaty Act in 1918. Alarmed at the declines of many bird species because of commercial hunting for consumption and feathers for women’s hats, Congress passed legislation that for the first time placed kill limits on migratory birds.

Even without a commercial market, hunters were still keenly interested in the Upper Bay’s canvasbacks.

One method that became popular after the ban on sinkboxes was “body boot hunting.” Hunters would don one-piece surplus World War I diving suits and wade into the Flats amid their spreads of decoys. The hunters would stand behind a cutout silhouette of a Canada goose stuck in the mud with a pole. The back of the cutout included a shelf for ammo.

The end of an era came abruptly with an August 1950 storm that ripped up submerged grasses that had grown on the Flats for centuries. Without their preferred food, most of the canvasbacks went elsewhere. Hurricane Agnes in 1972 was the final nail in the coffin, smothering the remaining grasses in an underwater wave of sediment.

Were the large flocks of canvasbacks seen by Bouchelle and Schutsky last winter an anomaly or signs of something more?

Each winter since 1955, the Maryland Department of Natural Resources has conducted a survey of the various duck species spending the season on the Chesapeake Bay.

This winter, 46,000 canvasbacks were sighted, actually down from 60,000 the previous year. But Josh Homyack, the agency’s waterfowl project manager, cautions against reading too much into the numbers, especially for last winter, when high water flows impeded counts and dispersed flocks.

“A lot of people saw them scattered around the Bay this year and thought populations would be high and were disappointed [that the survey’s results] were not,” Homyack said. Still, he added, “Most hunters had really good duck hunting on the Bay this year, particularly scaup and canvasbacks.”

That’s enough to spark a dream in Kerri Kneisley, executive director of the Havre de Grace Decoy Museum, who also saw one of those large flocks.

“Gosh, I wish we would see that like we used to.”

Two private museums capture the rich history of hunting canvasbacks and other ducks on the Upper Chesapeake Bay and Susquehanna Flats.

Devoted to preserving the area’s culture of the hunters and watermen, the museum is located in an old shad and herring-processing facility on the North East River that operated from 1880–1973. The floor of the museum used to be knee-deep in fish. Today you will find displays of hunting, boating and fishing tools. Visitors can trace the long history of the waterfowl hunter through various gunning rigs and an extensive display of original working decoys. The museum includes one of the country’s best collections of marine engines.

Hours: 12–4 p.m. Fridays, Saturdays and Sundays, Memorial Day through Labor Day. The museum is closed from the Decoy Show (mid-October) until Memorial Day weekend. Groups may call to arrange for a tour when the museum is not open.

Located on the banks of the historic Susquehanna Flats, the museum houses one of the finest collections of working and decorative decoys from the area’s famed carvers. The building once housed the swimming pool for the adjacent Hotel Bayou, a lavish structure built in 1921 mainly to accommodate visiting waterfowl hunters.

Hours: 10:30 a.m.-4:30 p.m. Monday through Saturday and 12–4 p.m. Sundays, year-round. Closed New Year’s Day, Easter, Thanksgiving, Christmas, and the day the city of Havre de Grace holds its 4th of July Parade & Fireworks, which may or may not be the 4th of July.