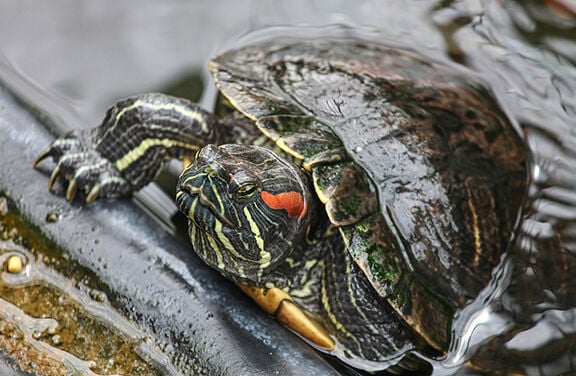 Nonnative red-eared sliders are popular with aquarium hobbyists but often are dumped in local lakes and ponds when they get too large, disrupting native species. (Pixabay) 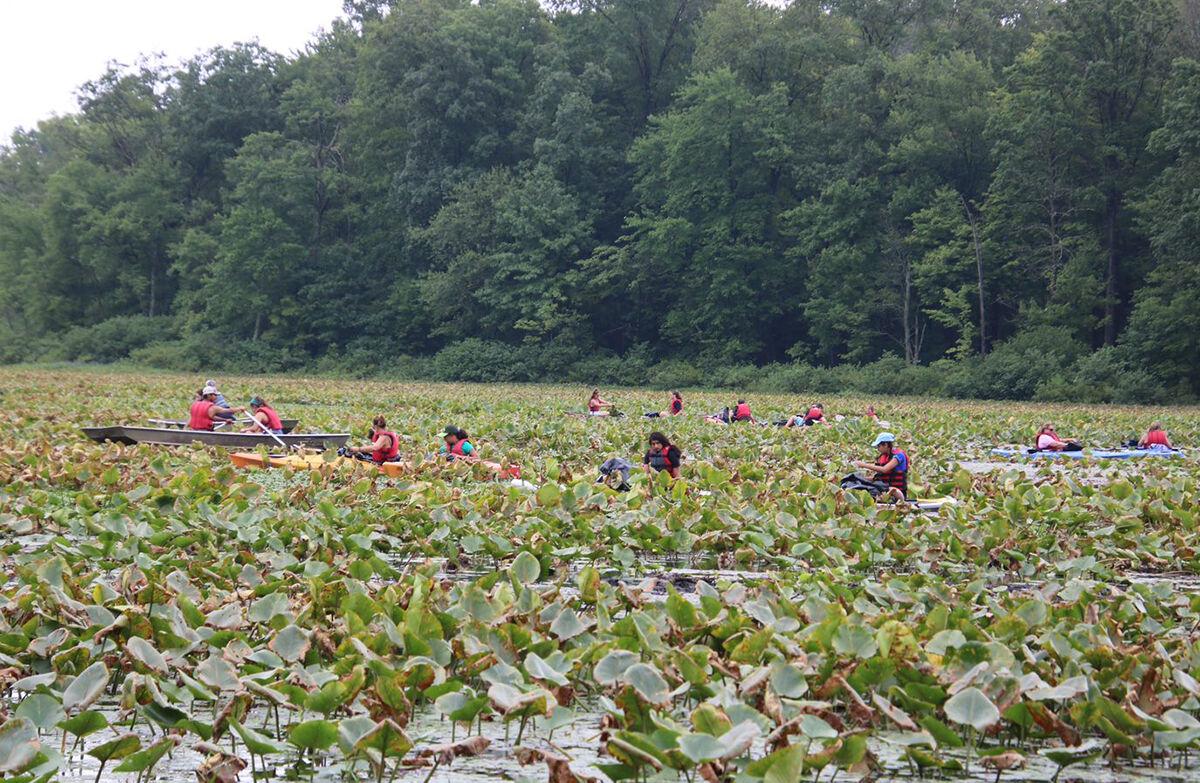 Volunteers use kayaks to find invasive water chestnuts and pull them from a lake in southeastern Pennsylvania. (Ashlin Brooks) 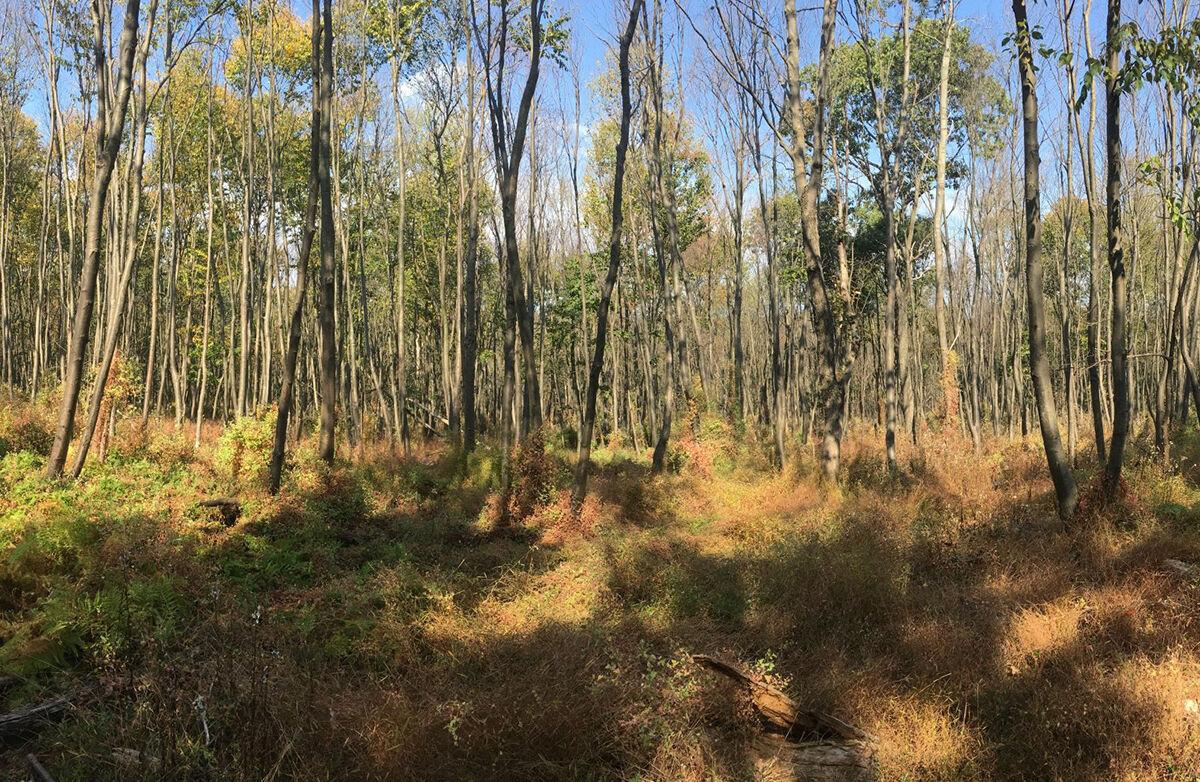 Reeling from invasive species on land, water and air, Pennsylvania is accelerating its efforts to combat hundreds of non-native plants, insects and fish.

“These species threaten the economy, environment and diversity of species (of Pennsylvania],” said the state’s Department of Agriculture Secretary Russell Redding at a recent legislative public hearing explaining an unprecedented effort to control invasives.

The new moves include bringing seven state agencies and 14 NGOs together for quick and coordinated attacks on new threats, revamping the governor’s Invasive Species Council and the hiring of a fulltime invasive species coordinator — Kristopher Abell, an entomologist and postdoctoral researcher from the University of Maryland.

The state is adopting a successful model used in New York that prioritizes early detection of invasive species, maintains a database of culprits and sets up regional public-private partnerships to try to stop newly discovered problems in their tracks.

The state will step up public education about the damage that results from spreading invasive species, and the state legislature may be asked to set fines for citizens and businesses that violate anti-spreading rules. And for good reason: Nonnative rusty crayfish got established in Pennsylvania when anglers bought them as bait and released them in the water at the end of their fishing trips. The red-eared slider, an enormously popular aquarium turtle, native to more southerly states, is often released into lakes and ponds when they grow too big. There, they eventually crowd out native species and impact local ecosystems.

To identify priority targets, the state is ranking invasives based on their potential impacts to the economy, agriculture, forestry, environment and human health — as well as public recreation, including hunting, fishing and tourism.

Invasive species are the leading threat to biodiversity in Pennsylvania, second to habitat loss. For example, invasive plants can undermine newly established streamside buffers that have been planted to reduce agricultural runoff, and they can break up dirt and gravel roads.

Invasives were first established in the United States in the 1700s and 1800s when pioneers and immigrants relocated plants to remind them of home. Over time, some have been deliberately spread in hopes of solving problems.

Some introductions have been colossal mistakes.

House sparrows were brought from Great Britain to Brooklyn in 1851 to feed on tree-damaging caterpillars. The sparrows are now despised because they are aggressive, taking over nests and even killing some birds, such as bluebirds.

Goat’s-rue, a plant from the Middle East, was introduced in Utah in 1891 as a forage plant for livestock. It turned out to be poisonous to sheep and cattle, but that didn’t stop it from establishing itself there and in other states, including Pennsylvania.

New nonnatives continue to find their way to Pennsylvania, thanks to a global economy in which they can be inadvertent stowaways in cargo on ships, trucks and airplanes. After the plants or creatures arrive, people unknowingly spread the hitchhikers when they travel.

Among the disruptive nonnatives that have arrived in the state in the last 14 years are the northern snakehead and round goby (fish); emerald ash borer and spotted lanternfly (insects); water chestnut, goat’s-rue, Palmer amaranth and water hemp (plants); and New Zealand mud snail.

They join such pests as gypsy moths, hemlock woolly adelgid, Asian ladybugs, marmorated stink bugs, tree of heaven and feral swine that arrived a decade or two earlier and are still bedeviling crops and trees, and even invading people’s homes.

Invasives often multiply rapidly and wreak havoc because natural enemies are not present in their adopted ecosystem.

For example, the emerald ash borer, an insect that showed up in Pennsylvania in 2007, will likely kill all of the estimated 318 million ash trees in the state, except the precious few that can be treated chemically.

The spotted lanternfly, a colorful leaf-hopping insect from Asia, showed up in Pennsylvania in 2014, likely in shipments of stone from China. Now, 34 counties are under quarantine.

“The economic impact could total in the hundreds of millions of dollars and the loss of hundreds of thousands of jobs for those in the grapes, apples, hops and hardwood industries,” warns the state Department of Agriculture.

One of the chief weapons against the insect to date has been to encourage the public to squish them and their egg masses on sight. Among the latest tools in the fight: dogs that can smell lanternfly egg masses.

Ash trees killed by the emerald ash borer are falling across streams, creating hazards and barriers for paddlers. Runaway Japanese barberry is creating ideal habitat for black-legged ticks and white-footed mice — bringing together the two ingredients necessary for the transmission of Lyme disease to humans.

The woolly adelgid, a tiny insect from Asia, has killed countless eastern hemlocks, the state tree. The loss of hemlocks, which provide shade to cool water along many streams, is threatening brook trout habitat.

As an example of how hard it is to eliminate invasive species, consider the boll weevil. The insect became the scourge of the cotton industry in southern states beginning in the early 1800s and was not declared defeated until 2009, despite the largest federal extermination effort in history.

On the other hand, Pennsylvania officials point to the plum pox virus as a modern-day success story. After the virus was found on some 1,500 peach trees in 1999, fruit trees were cut down and destroyed in all infected orchards. Other orchards in the region were placed in quarantine, and new plantings of susceptible fruit trees were forbidden. The virus has not been found since 2006.

State Sen. Gene Yaw, who held the legislative public hearing hosted by the Center for Rural Pennsylvania, said obtaining dedicated funding for the program was “paramount.”

Ag Secretary Redding said that despite the lack of funding, “we’ve got the right plan, the right people and a vision.”

To read about more than two dozen projects and learn about Pennsylvania’s effort to fight invasive species, visit agriculture.pa.gov and enter “Governor’s Invasive Species Council” in the search field.