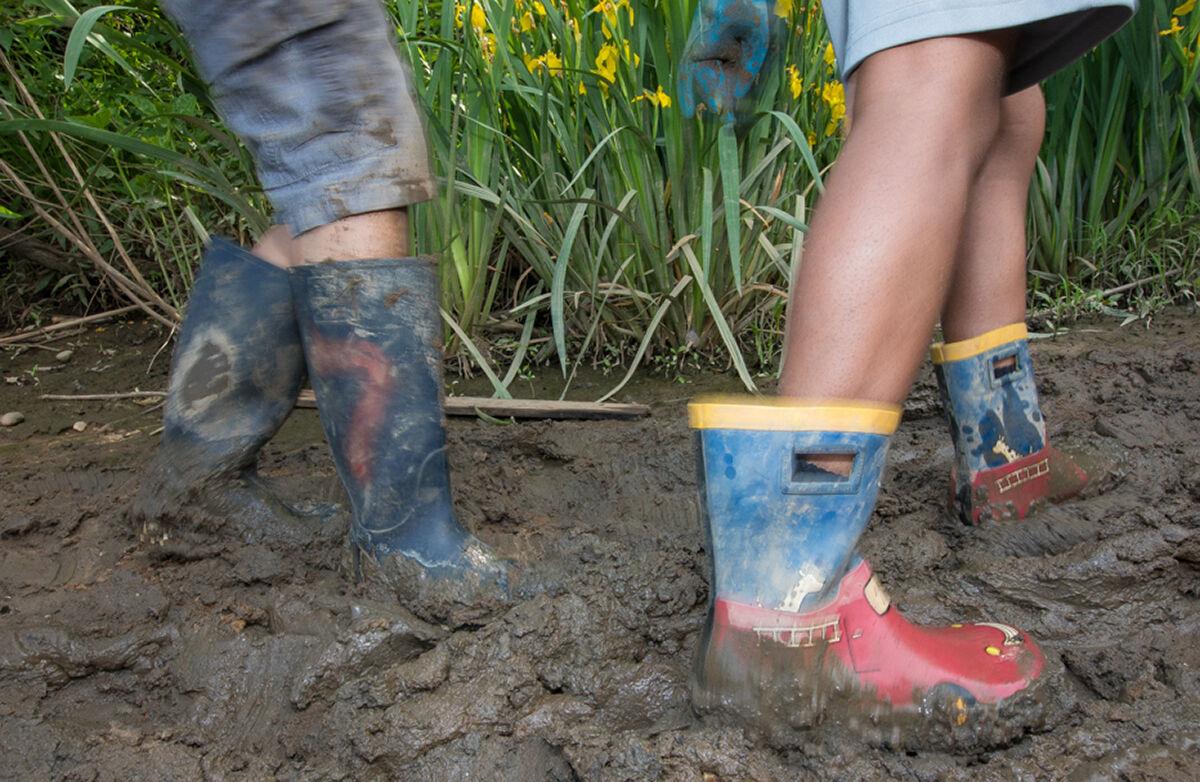 Students tromp through the muck during a wetland restoration project on Kingman Island.

Aerial view of Kingman and Heritage Islands on the Anacostia River in Washington, D.C. 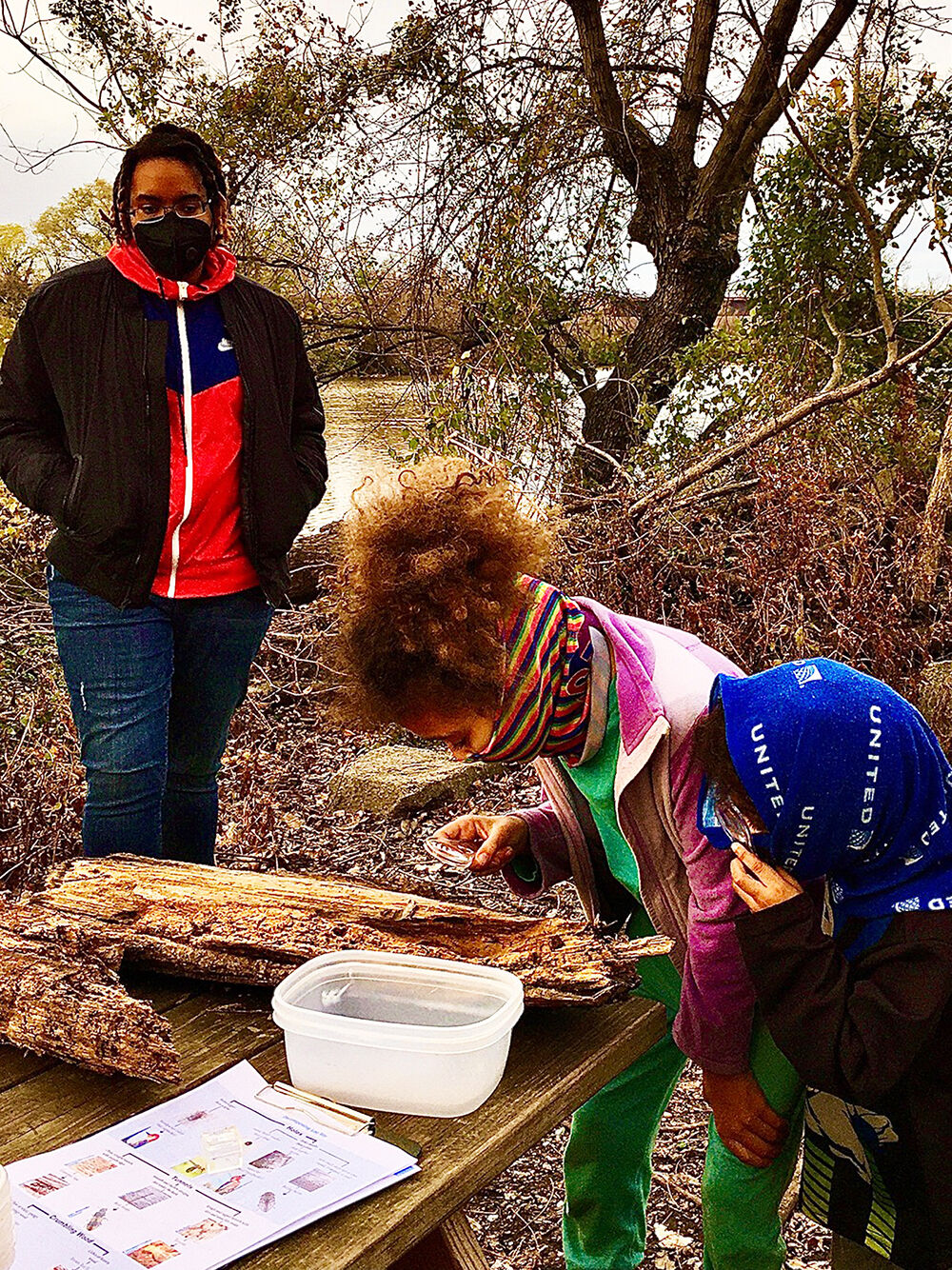 Dredged up, dumped on and overgrown with invasive plants for decades, a pair of islands in the District of Columbia is about to get a long-awaited makeover.

Created when the Anacostia River was dredged in the early 1900s, Kingman and Heritage islands were always envisioned as a park in the southeastern reaches of a growing city. And, after languishing under a lack of funding and direction for decades —a century, all told — that vision in recent years is at last coming into focus.

City-supported nonprofits and volunteers chipping away at layers of trash, invasive species and other evidence of neglect over the last 15 years realized that they were slowly unearthing a natural treasure — at a time when appetites for green havens in the city are growing. The narrow, nearly 2-mile-long Kingman Island reaches from well above the river’s Benning Road bridge to just south of the East Capitol Street bridge, alongside the now defunct RFK Stadium. Heritage Island is considerably smaller, only a quarter-mile long and tucked in between the larger island and stadium in what is called Kingman Lake. A pair of footbridges connects the islands to the west side of the river.

Recognizing the potential of these landscapes, District Mayor Muriel Bowser in 2018 announced plans to invest $4.7 million in major restoration work on the islands. (More funds have been added since then for a total of $5.5 million.) The mayor also directed the District’s Department of Energy and Environment to designate portions of both islands as state conservation areas and classify the southern area of Kingman Island a critical wildlife area.

Kingman and Heritage Islands Park, a project of the District in partnership with the nonprofit Living Classrooms, already provide trails for walking and bicycling through 50 acres of natural habitats. In recognition of its resources, the National Park Service added the park to its Chesapeake Bay Gateways and Watertrails Network in 2011.

“It’s a man-made island where there was trash and waste,” said Jay Wilson, a senior policy adviser at DOEE who is overseeing one of the first phases of work on the islands. “[But] over the course of the years, Kingman is now thought of as a crown jewel of the Anacostia River. The natural ecology has emerged, and it’s become a quiet respite in the middle of the city.”

Cleanup days and workforce development programs have benefited the islands over the years, keeping them at what Wilson calls “an awesome status quo.” But the current initiative allows park managers and the community to take a broader look at what they want the space to become, with an eye toward improving the land’s ecological health and making it more accessible to more people.

The state conservation area designation also comes with some constraints; the islands need to be used for environmental, educational and recreational purposes. Those core uses will be further shaped by a public input process; project managers will present their ideas during a series of online meetings in late April and May.

“One of the things people want [so far] is to keep Kingman wild,” Wilson said.

One of the main goals of the work is to restore the ecosystems of Kingman and Heritage islands. But that can be a tricky undertaking; it’s a constructed landscape and therefore offers no baseline for what SHOULD be growing on it.

For that reason, the approach at the islands has been to remove what clearly should NOT be there — discarded refrigerators and such in the early days and now, persistent stands of invasive honeysuckle and kudzu — and to see what emerges in their wake.

“Because the islands are [made of] fill material and not native in the first place, we’re not sure what’s going to come up when we give opportunities for that to emerge,” Wilson said.

Damien Ossi, a wildlife biologist with DOEE, said similar ecosystems nearby at the Kenilworth Aquatic Gardens on the Anacostia River or at Theodore Roosevelt Island on the Potomac River could give clues as to what might thrive on these islands.

“We’re really looking to what’s living there now to help us figure out what could potentially be there in the future,” Ossi said.

Plans are still in the early stages. So far, renderings imagine replacing vine-choked shrubs with trails winding through native meadows. One mown area could include a sheltered outdoor classroom. Another outdoor classroom could be built near a marshy bank and another in the forest, each design mimicking its surroundings.

Kingman and Heritage islands are already the setting for what aspires to be “meaningful watershed educational experiences” for students in the District. The islands could also host an entire grade of students from a school on a warm spring day, which would justify having multiple classroom settings onsite.

Education has been a linchpin of the islands’ restoration since the District tapped the nonprofit Living Classrooms to spearhead the effort in 2007. Living Classrooms, which promotes “learning by doing,” educates youths and young adults through environmental work, benefitting community spaces in the process.

Until restoration efforts began in earnest, the islands continued to be used as an unofficial dumping ground. There were also other ideas floated for the islands — an airport or amusement park, for instance.

The improving health of the Anacostia River that surrounds the islands makes a much stronger case for a nature-oriented revitalization today. The city and others have begun a more than $35 million undertaking to clean up toxic sediments along the river bottom, making future recreation even more feasible.

“The city has a different relationship with the river than we used to,” Wilson said. “All of that, we hope, is bringing renewed life to the Anacostia River. Kingman Island is sort of the centerpiece of that.”

Register to virtually attend public meetings on the future of Kingman & Heritage islands at KingmanIsland.com. The meetings take place May 12 & 26.