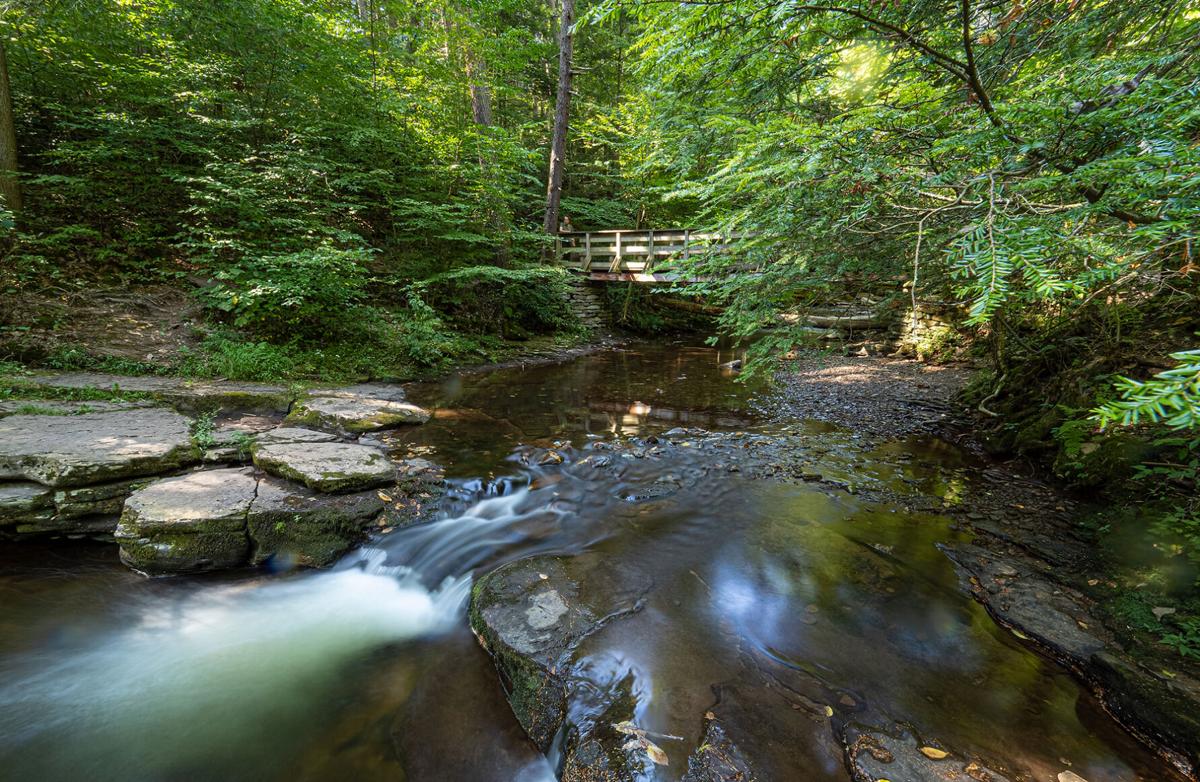 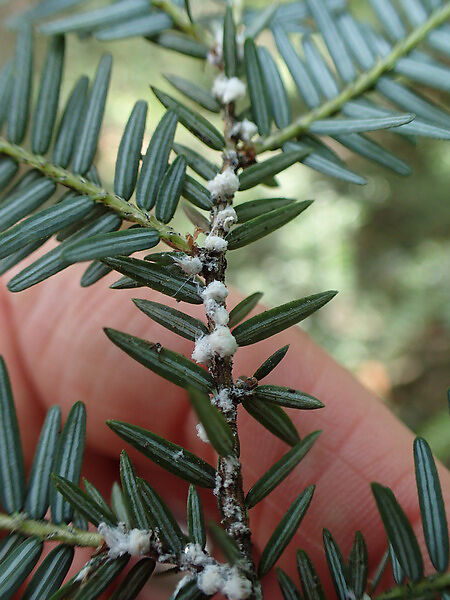 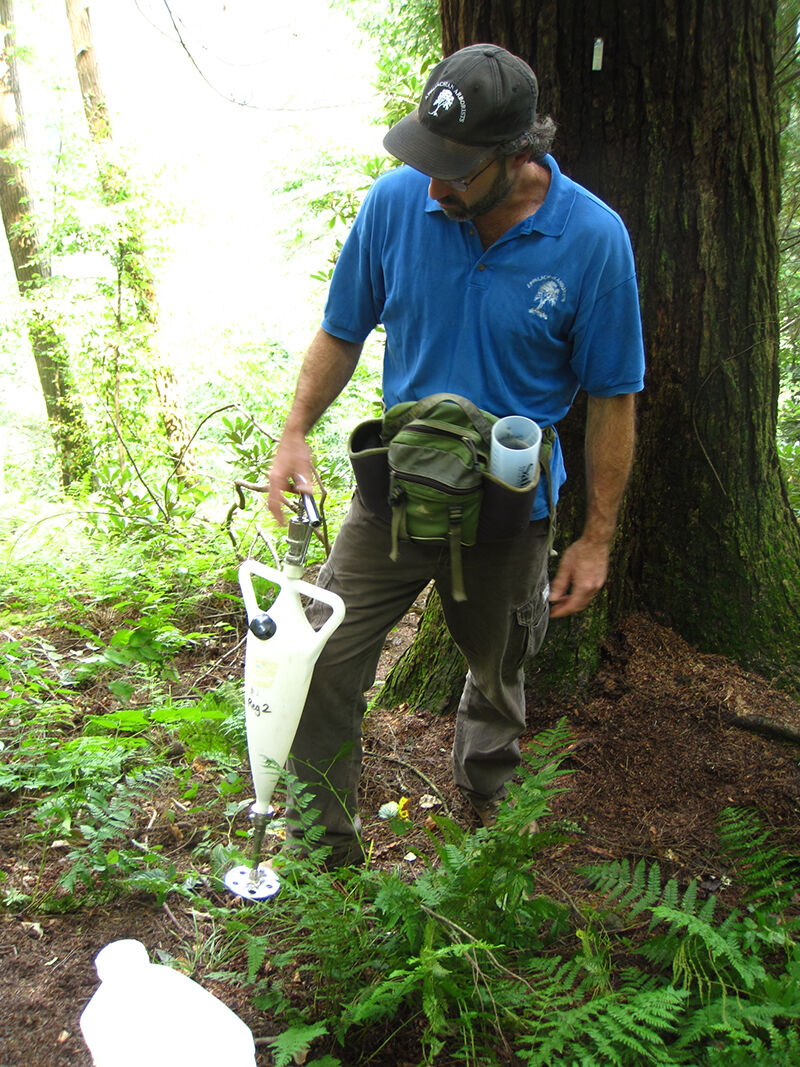 A worker in Pennsylvania injects insecticide into the ground at a state park to save an old-growth hemlock tree from being attacked by woolly adelgids. (PA Department of Conservation and Natural Resources) 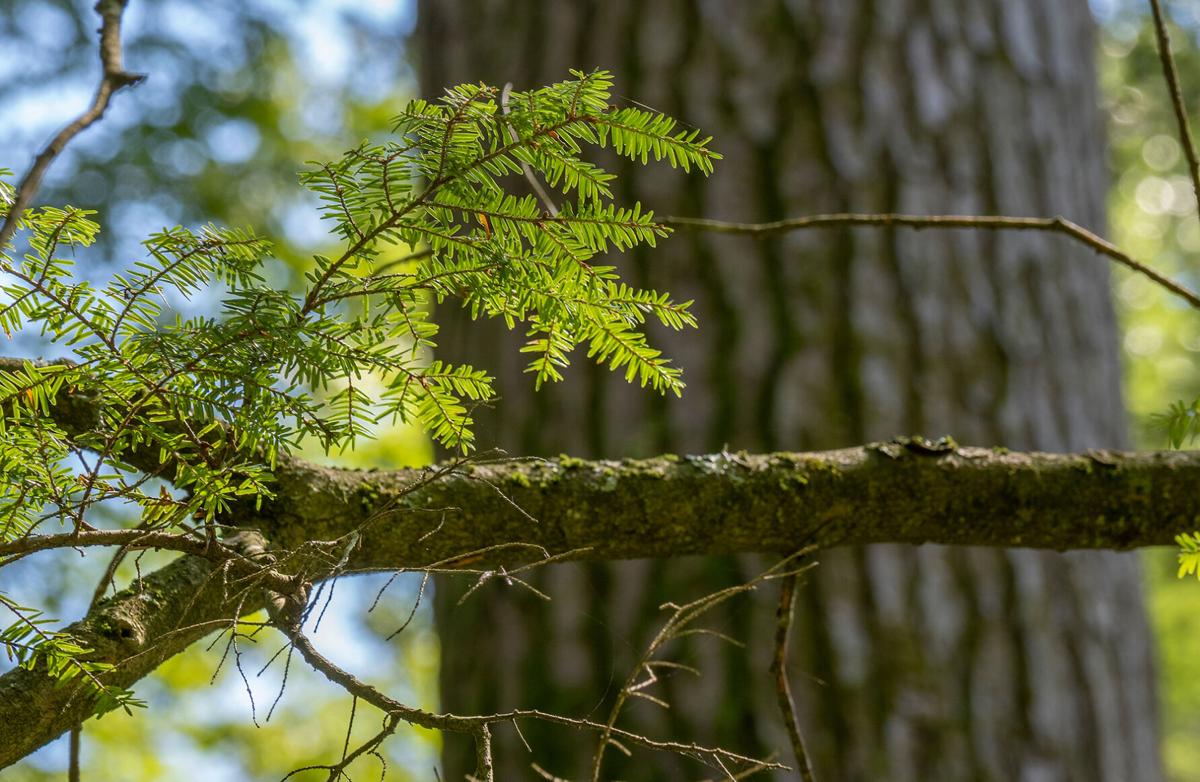 Several new scientific discoveries give hope that eastern hemlocks will not go the way of chestnut, elm and ash trees and largely disappear from forests in the Chesapeake Bay watershed.

The eastern hemlock (Tsuga canadensis) is one of the most prevalent, longest-living, beautiful and ecologically vital trees in Appalachian forests. Sometimes called the redwoods of the East, they can take 250–300 years to mature and live more than 800 years.

They also have a long history with humans. Native Americans used hemlocks for medicines. Settlers used the tips of branches for tea and as a dye for wool and cotton. The mountains of Pennsylvania have ghost towns where leather factories sprung up to receive the tannin from hemlock bark to turn animal skins into leather. The trees’ intense shade cools streams and supports fish habitat. And many homeowners still want hemlocks in their landscaping tableaux.

“As a kid I used to climb a local hemlock just to sit in the branches, swaying with the tree. It was the only place I could sit with myself, uninterrupted,” a Pennsylvania woman said.

But for 40 years, the old denizens of the forest have been under relentless attack from woolly adelgids — rice-sized, aphid-like insects native to Asia. Here, there are no natural enemies to keep them in check. They continue their advance west and north by about 8 miles a year and have infected about half of the eastern hemlock’s range.

So far, the tiny invaders have killed millions of hemlocks from Georgia to southern New England. Some of the hardest-hit areas are south of the Chesapeake region, but Pennsylvania, Virginia and West Virginia have suffered heavy mortality.

Hemlocks once dominated the forests of Pennsylvania, where the hemlock is the state tree, along with chestnuts and white pines. Now, adelgid infestations have been found in 64 of 67 counties.

“Without intervention, most trees in natural settings will die,” according to the state’s latest Eastern Hemlock Conservation Plan.

There still are an estimated 124 million hemlock trees greater than 5 inches in diameter alive in Pennsylvania. But that’s nearly 13 million fewer than in 2004 and the mortality rate has increased fourfold since 1989.

In Virginia, the Limberlost grove of hemlocks, oldest in Shenandoah National Park, is now a graveyard of felled giants.

In Maryland, the hemlocks in Cunningham Falls State Park have been wiped out.

But now, forest managers have some reason for hope. Among them: the discovery of adelgid-resistant survivor hemlocks in New Jersey, a successful crossbreeding project to produce more adelgid-resistant trees, and the introduction of two new insects that feast on adelgids.

“This is one pest we’re having success at [defeating],” said Craig Kuhn, who heads the forest pest management section of the Maryland Department of Agriculture.

It’s been nearly 70 years since the tiny, voracious, mass-producing woolly adelgids were first found on hemlocks imported from Japan to beautify the Gilded Age Maymont estate outside of Richmond. The pest may also have been introduced to three other estates in the East and South between 1910–15. The insects were first found in Pennsylvania in 1967 and Maryland during the 1980s. By then, adelgids had begun marching up and down steep ravines, mountainsides and people’s yards.

Adelgids kill by inserting their mouth parts into twig tissues near the base of needles. This feeding consumes plant sugars needed by the tree. Most people recognize adelgids by the white wax-like substance they secrete around their bodies.

Mass feeding by adelgids typically kills a hemlock in four to 15 years. Others keep living but in a moribund state. “They’ll just start looking like lollipops with just tufts of needles on the top and the rest dead,” Kuhn said.

Forest and park managers have bought time by injecting insecticides into the tree or surrounding soil. That protects the most visible, historic and popular hemlock trees along trails, in parks and along streams where the trees create a unique “microclimate” that dozens of animals, birds and insects depend on.

But because of cost and accessibility, chemical protection in Bay states is mostly reserved for the hemlocks most seen by the public.

The chemical effort has saved hundreds of majestic hemlocks in Pennsylvania’s Cook Forest State Park. The Forest Cathedral stand there draws tens of thousands of visitors each year. The grove, a National Natural Landmark, has the oldest hemlocks in the East; some almost 400 years old.

In all, 146 stands of hemlocks are chemically treated in the state.

In Western Maryland, at Swallow Falls State Park, home to the state’s most popular hemlock stand, as many as 3,000 trees are chemically treated to keep them alive and robust.

But millions of trees in Bay states have been killed or weakened.

Meanwhile, a cooperative effort among scientists, land managers and other advocates has been pushing for more solutions.

Along with the federal government, they formed the Hemlock Woolly Adelgid Initiative in 2003. The coalition now includes four federal agencies, 20 state agencies, 24 universities, seven institutions in China and nine private industries in Japan.

The first pushback involved capturing and releasing several predatory beetles that feed on adelgids. One species was from the Pacific Northwest. Another species, a pinhead-size type of ladybug, came from Japan.

From 1999 to 2011, more than 2.5 million Japanese ladybugs were released in 15 eastern states. But the insects tended to fly away from targeted hemlock stands.

Two other species of beetles have fared better since releases began in 2005. Established colonies are killing an estimated 30% to 40% of adelgid eggs sacs, said Scott Salom, a professor of entomology at Virginia Tech, who has studied the biological control of adelgids for 22 years.

Unfortunately, adelgids have two distinct life stages per year, one of them producing a generation of adults in late spring. And because the beetles do not feed in late spring, the wounded adelgid populations have a chance to bounce back.

Enter two species of silver flies that are found on hemlocks in the U.S. West and consume adelgids in the spring. Since 2015, the silver flies have been released in controlled settings throughout the East.

Though still being studied to make sure they don’t negatively impact native insects, there is hope that the flies may be the missing link in the biological control of adelgids — and the long-term strategy for saving hemlocks.

“It looks promising because it nails the part of the life cycle [beetles] don’t get to,” said Donald Eggen, forest health supervisor for the Pennsylvania Bureau of Forestry.

“The great hope is that the silver flies paired with [the beetles] is the one-two punch,” said David Mausel, a regional entomologist with the U.S. Forest Service.

Optimism also is buoyed by experiments with healthy hemlocks found in New Jersey among an otherwise devastated hemlock grove infected for more than 30 years.

In 2015, trees grown from cuttings of those healthy trees, as well as from presumably susceptible hemlocks, were planted in the wild next to infested forests in seven states, including Pennsylvania, Maryland, New York and West Virginia. After four years of observation, scientists reported that 96% of the “bulletproof” trees survived, compared with only 48% of susceptible trees. The resistant trees also grew faster and retained more foliage.

Though some scientists want to grow more test trees and perform more monitoring, many in the fight to save hemlocks think that adelgid-resistant trees could eventually help reforest stricken stands.

Another recent development is the successful production of a hybrid hemlock by crossing adelgid-resistant hemlocks from China with native Carolina hemlocks (T. Caroliniana), which grow in the southern Appalachians, including parts of Virginia.

Greenhouse trials of the hybrid occurred at the U.S. Department of Agriculture’s Beltsville Agricultural Research Center in Maryland. Now research is focused on determining if the hybrids will grow in the more northerly range of the eastern hemlock. Attempts to cross Chinese hemlocks with eastern hemlocks were not successful.

Scientists warn that the main use of these hybrids may be on residential land. Most nurseries don’t sell eastern hemlocks anymore because of the risk of infection.

And because the hybrids grow slowly and must be reproduced from cuttings, they may not play a major role in restoring hemlock forests. And in those wild settings, Salom said, “You want the eastern hemlock. It’s just not the same tree.”

A loss that hits hard

Aesthetically, the loss of stately eastern hemlocks would be missed. But the biggest impact would be on the environment. Their deep shade, cool temperatures, water-cleansing ability and slowly decomposing trunks create unique microclimates.

It’s a critical habitat for many terrestrial and aquatic species. Nearly 96 bird species and 47 mammal species are tied to hemlock forests, not to mention insects and amphibians like salamanders. There are unique lichen and plant communities that dwell among the hemlocks.

And wild trout. Because hemlocks store and slowly release water, scientists warn that marginally coldwater streams may dry up if they lose their hemlock buffer.

Attempts to replace dead hemlocks with fir, spruce and pine trees, or rhododendrons, have proven that they are inadequate substitutes. “It’s got a specialized niche in our forest that is irreplaceable,” Salom said.

If being attacked by insects isn’t enough, warming global temperatures are another threat to hemlocks, because cold weather helps to kill off adelgids.

Those involved in fighting for hemlocks’ survival often harbor a soft spot for the tree.

Big hemlocks & where to find them

Cathedral State Park in Aurora, West Virginia, about 15 miles south and west of Swallow Falls has a virgin stand of Hemlocks with 350 year-old trees in a 133 acre state park.https://www.oldgrowthforest.net/wv-cathedral-state-park

That sounds nice. Heart's Content Recreation Area in Pennsylvania's Allegany National Forest has the biggest hemlocks I've ever seen, it's a short trail, but worth it. Allegany State Park in southwestern New York has some really nice old(er) growth hemlock in the Big Basin, nothing quite like Cook Forest though.