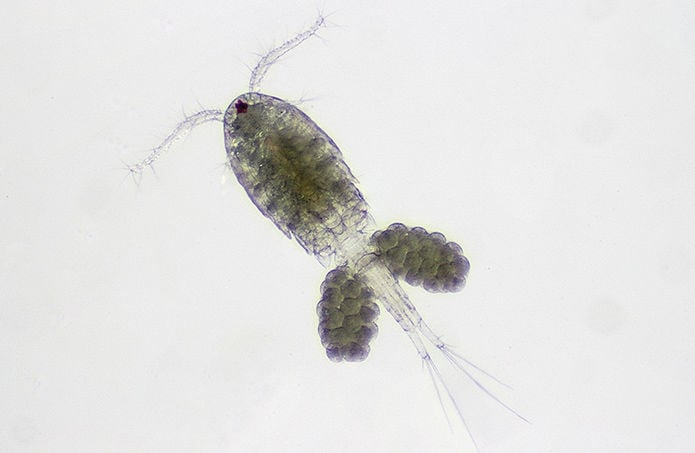 This is a microscopic view of a female copepod bearing two berrylike sacs of eggs. Its single eye offers limited vision and is augmented by handlebar antenna that can sense chemicals and pressure in the water. Scientists are investigating the use of copepods to help reduce the mosquito population and decrease the need for pesticides. (Catherine Fitzgerald) 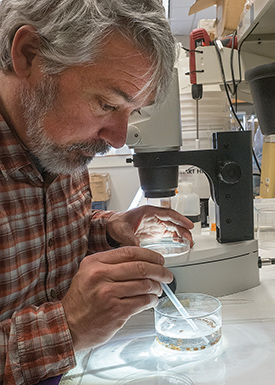 Jamie Pierson, an assistant professor at the Horn Point Laboratory, wields a pipette to capture a single copepod for examination under a microscope. “They’re probably the most numerous animal on earth,” he said. “Anywhere you’ve got water, you have copepods.” 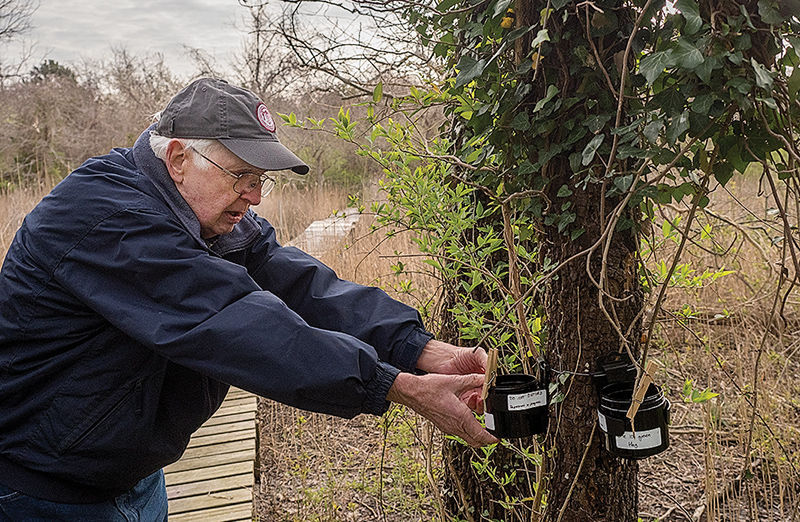 Ted Suman, a retired entomologist volunteering at the Horn Point Laboratory, regularly collects “ovicups” placed around the Cambridge campus to secure a fresh batch of mosquito eggs for use in the experiment once they hatch into larvae.

April showers bring May flowers — and mosquitoes. This spring, a team of researchers with the University of Maryland Center for Environmental Science is looking into whether the annual onslaught of those pesky blood suckers can be curbed by some tiny, shrimplike critters called copepods.

Copepods are an amazingly diverse group of miniscule crustaceans found in great numbers almost everywhere there’s water, fresh or salty. Their name is Greek for “oar foot,” which describes the way they use their antennae and appendages to paddle through the water.

The 15,000-odd species of copepod play a key role in aquatic and marine food webs, feeding on algae and other plankton, and in turn being fed upon by larval fish and other creatures. They’ve drawn interest for biological insect control because studies have found that at least some of them devour mosquito larvae.

“What we’re trying to figure out is: Do our local copepods eat our local mosquitoes?” said Jamie Pierson, an assistant professor at the Horn Point Laboratory in Cambridge, MD. If they do, he added, can they reduce the mosquito population enough to decrease the need for pesticides?

It’s a matter of no small import in coastal areas, including the Chesapeake Bay, where people’s enjoyment of the outdoors can be ruined by a rash of itchy bites from clouds of mosquitoes. Not only are they a nuisance, they can spread diseases, including West Nile and Zika.

To see if copepods can help, Ted Suman — a retired entomologist from Easton volunteering at the lab — began making rounds of the Horn Point campus in early April to collect a set of black cuplike containers placed on trees and buildings.

Each “ovicup” contains a tea-like brew of vegetation decaying in water, a recipe designed to attract female mosquitoes looking for promising spots to lay their eggs.

“They like the rotted stuff,” Suman explained. The larvae feed on algae, plankton, fungi, bacteria and other microorganisms.

There are about 60 species of mosquitoes in Maryland, Suman said. Some lay their eggs on the water, while others prefer to deposit them just above it. The researchers have tried to cater to both: For the above-water egg layers, they clamped wooden tongue depressors inside the cups with clothespins.

Researchers are particularly interested in Culex mosquitoes, the primary transmitters of West Nile virus, and Asian tiger mosquitoes, an exotic species first observed in Baltimore in 1987 that has since spread across most of the state. Unlike other night-feeding species, tiger mosquitoes can be active in the daytime and lay their eggs wherever there’s a small amount of water, including in cans, bottles, flower pots, clogged rain gutters and pets’ water bowls.

After collecting the cups, Suman takes them to the lab, where faculty research assistant Catherine Fitzgerald decants the contents into clear breeding chambers. They’re then placed on a shelf in a warm, walk-in “environmental room.” There, the eggs can hatch into larvae, and any that molt into adults can fly up a funnel into a separate part of the chamber, still trapped but out of the way.

The larvae are destined to be exposed to Acanthocyclops robustus, a species of copepod that researchers collected from Pickering Creek in neighboring Talbot County. This species has been reported in Europe, the Great Lakes region and New England, among other places. According to the Center for Freshwater Biology at the University of New Hampshire, it’s more abundant close to shore and tolerates brackish water.

In a brightly lit petri dish of clear water, the copepods look like tiny, swimming specks. Under a microscope, they are seen to have oval-shaped bodies, with a single eye and antenna protruding like handlebars from their heads. Thus magnified, they appear to be hopping, propelling themselves through the water with jerky strokes.

“They’re pretty voracious predators,” Fitzgerald said. They bite their prey as they swim by without stopping to consume the entire meal. One study estimated that, because of its grazing technique, a single copepod can kill 30–40 mosquito larvae a day.

From the planktonic stew collected in Pickering Creek, Fitzgerald isolated one egg-bearing female copepod and has successfully cultured a population for research. The copepods have already been offered mosquito larvae and eaten them, at least some types. The next test, Fitzgerald said, will be to find out if the copepods will still prefer the taste of mosquito larvae if offered a buffet of other foods as well. They also intend to try out other local copepod species to gauge their appetite for mosquito larvae.

The UMCES research is underwritten by a $4,000 “seed” grant from Waterfowl Chesapeake, the nonprofit that organizes the annual Waterfowl Festival in Easton.

Scientists have known for at least a couple of decades that copepods feed on mosquito larvae, and various species have been given field trials in Asia and South and Central America. They were credited with helping to suppress an outbreak of dengue hemorrhagic fever in northern Vietnam in the 1990s, when they were introduced into water storage containers in rural villages that attracted disease-carrying mosquitoes. Copepods themselves are harmless if consumed.

In the United States, New Orleans has tried copepods to supplement its extensive program of spraying to kill mosquito larvae. The city’s staff have reared them in the laboratory and applied them to water-holding containers such as tires, barrels and cisterns, according to annual reports of the New Orleans Mosquito, Termite and Rodent Control Board.

New Jersey also experimented with copepods, announcing in 2012 that it was breeding and releasing them in various locations around the state. Caryn Shinsky, spokesperson for the state’s Department of Environmental Protection, said the effort had since been discontinued, but she could not say when or why.

The New Jersey program ran into resistance from local county mosquito control offices, according to Randy Gaugler, a professor at Rutgers University’s Center for Vector Biology. Local officials espoused “evidence-based” mosquito controls and were “understandably reluctant to devote resources to an idea that was as yet unproven for New Jersey,” he explained. With the change in administrations, Gaugler added, the department’s new leadership dropped the idea rather than try to generate data needed to convince skeptical local officials.

“Personally, I believe copepods have potential,” Gaugler said. “They’ve proven themselves in some localities, typically in the tropics. But stakeholders need evidence (i.e., data) generated locally.”

That’s what Pierson said he and his team hope to produce in Maryland. The state Department of Agriculture has tried biological controls, particularly by rearing and conducting limited releases of Gambusia holbrooki, commonly known as “mosquito fish.” But the state’s main tool for controlling mosquitoes is an extensive spraying campaign across much of the state from late March to mid-October.

State officials take precautions to limit the exposure of bees, bats and aquatic creatures to the chemical and bacterial agents employed for mosquito control. But concerns remain, and spraying is either banned or avoided in some especially sensitive natural areas.

The UMCES researchers are investigating whether the use of copepods could provide another option.

“We’re not saying it’s going to replace everything else,” Pierson said, “but it could be a part of an overall strategy.”