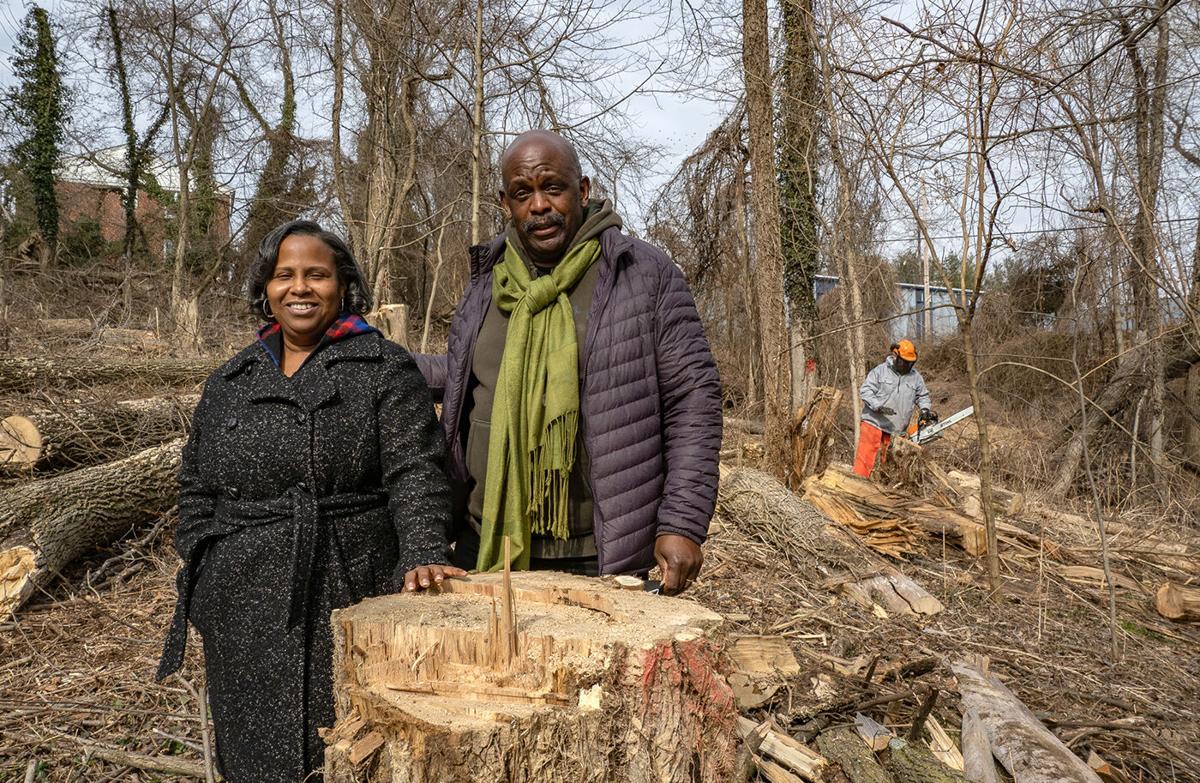 Pastor Michael Martin of Stillmeadow Community Fellowship in Baltimore and Yorrell Tuck, operations manager of the church’s charitable nonprofit organization, visit the wooded hillside where trees killed by invasive ash borers and vines are being cut down. 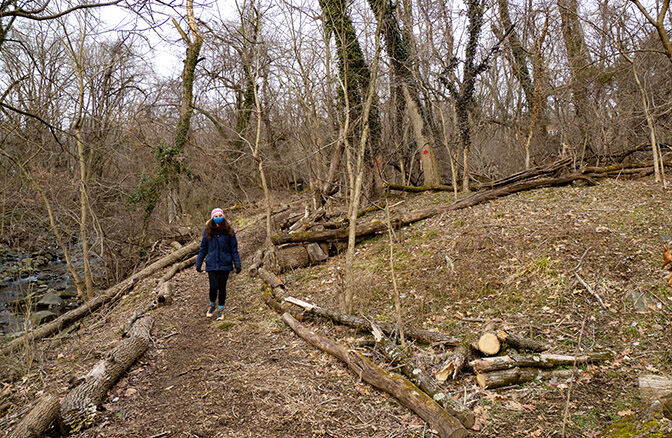 Sophie Phillips, a graduate student from the University of Delaware, walks a trail cut through a 10-acre forest owned by Stillmeadow Community Fellowship in Baltimore. She and other Delaware students have been volunteering to help transform the tract into a “peace park.” 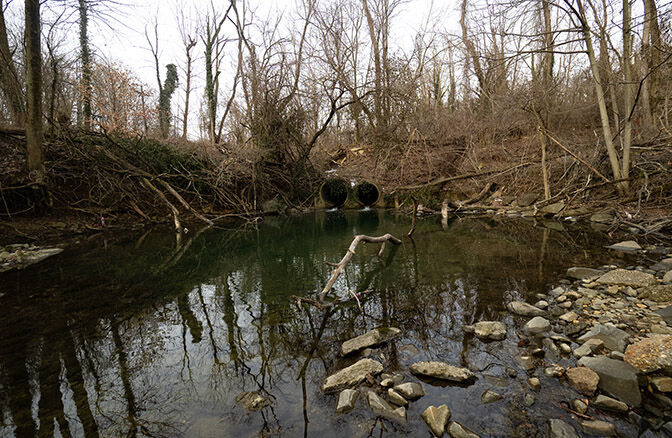 A pond drawing water from a buried stream is tucked away at one end of the woods on the grounds of Stillmeadow Community Fellowship in Baltimore. 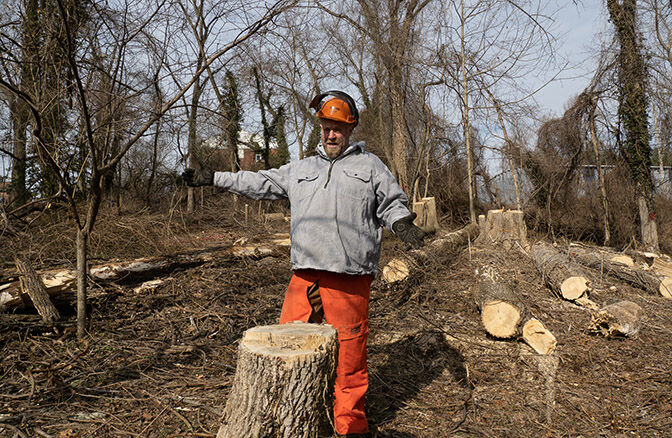 Morgan Grove, research forester with the U.S. Forest Service, explains the precautions he and other volunteers had to take in felling trees killed by invasive emerald ash borers on the grounds of Stillmeadow Community Fellowship in Baltimore. 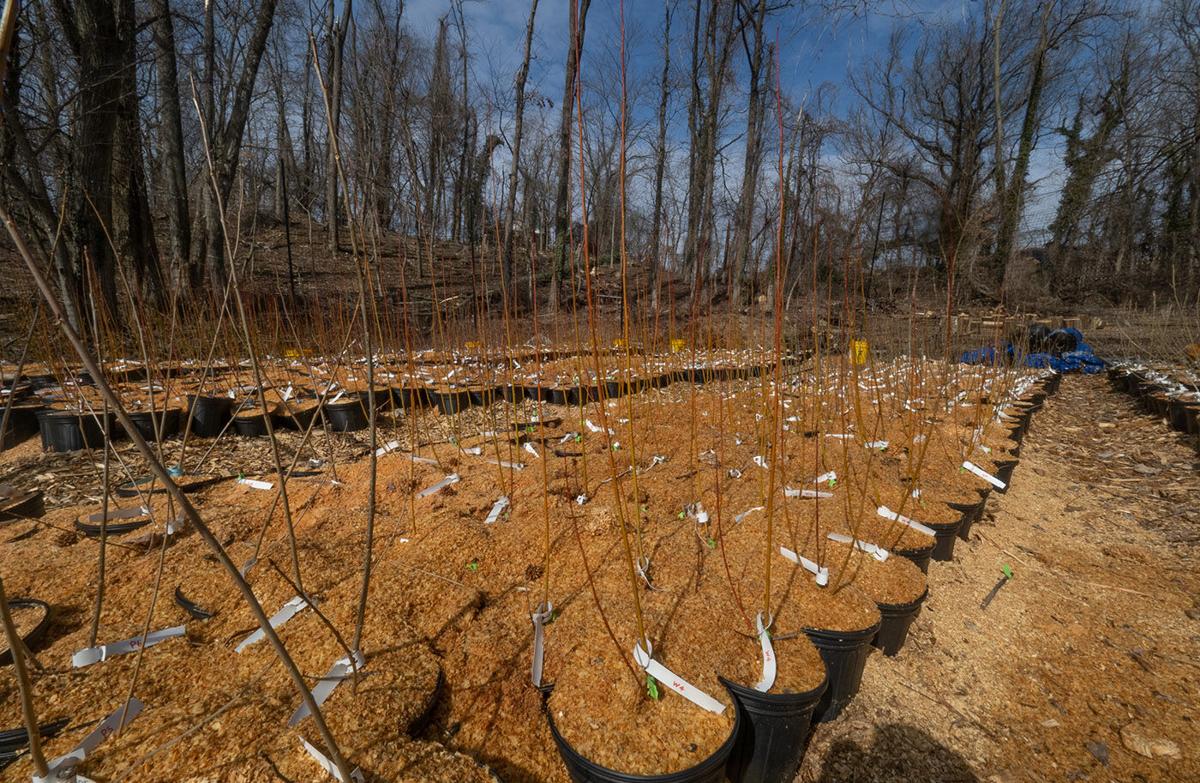 Nature has a way, it seems, of getting people to shed their cares for a spell and relate both to it and each other.

That’s what is happening, at least, in southwest Baltimore. There, a long-neglected swath of forest in an urban neighborhood that’s had its share of troubles has been reborn as a “peace park.” The church that owns the tract is drawing legions of helpers to transform it into an oasis of contemplation and connectedness.

For Stillmeadow Community Fellowship’s pastor, Michael Martin, the project aligns with the biblical admonition to be good stewards — of the church and its property, of the community in which it is situated and of the Earth itself.

The peace park links the worship in the sanctuary with what’s going on outside, Martin explained, “taking the holy and the adoration from inside and taking it for a walk, then taking what’s outside and bringing it in here.”

A walking path has been hacked through vines and invasive plants that once clogged the woods to reach a stream and secluded pond. Meditation stations have been set up along the way where visitors can spend a moment in solitude — or maybe glimpse the deer, fox and other wildlife that hang out there.

“I think it’s a model, in some ways, of how to make the most out of what you have,” Martin said.

Now, with the help of multiple partners, from the U.S. Forest Service to school groups and environmental nonprofits, Martin envisions adding an outdoor classroom, community garden and a sylvan amphitheater for the surrounding largely African American neighborhood.

On a wintry morning in February, though, it wasn’t safe to walk in the park. A pair of federal foresters wielded chainsaws to fell some of the 60 or so dangerously brittle ash trees that had been killed over the last couple of years by invasive emerald ash borers.

For Morgan Grove, a U.S. Forest Service researcher, the project is a test of whether traditional forestry practices can restore a degraded urban woodland. They plan to replace the dead ash trees, starting with hybrid poplars. Capable of growing 6 feet in a year, those saplings should rapidly restore the shade needed to prevent more invasive plant growth. Then, they intend to thin out the hybrid trees and replace them with native trees in fenced enclosures to prevent deer from eating them.

“Ultimately, what we’re trying to build is a climate-adapted, resilient forest,” Grove said.

Grove said the Forest Service involvement with Stillmeadow's peace park is more than just an ecological restoration, though, because it ties in with the church’s efforts to make the park a place for the community to connect with nature and each other.

“It’s healing a forest, but we’re going to be healing a community,” he concluded, noting that “there are a lot of people here who suffer from trauma and stress.”

Martin said he and the congregation have been on a journey the last few years to learn about the church’s forest and what it can mean for the community.

“I’m not a camping dude, but I am a lover of nature,” he said. The forest was so overgrown when he got here that no one used it, he recalled. But once he ventured into it, he realized its importance and its potential.

“This has really forced us to be educated,” he said. “Now, it’s about understanding what is happening with the Chesapeake Bay, how massive it is and how precious it is and how in danger it can be [and also] clean water and what’s happening to the planet.”

The project gained many of its partners after a flash flood ravaged the area in May 2018. The intense downpour that devastated Ellicott City a few miles to the west also inundated homes, destroyed vehicles and closed streets for weeks around Stillmeadow. They learned that the stream flowing through the church woods contributes to flooding problems when debris clogs up the culvert under the road.

In growing awareness of the need for environmental stewardship, the church has undertaken several greening projects. There’s an apiary for making and selling honey to the community. There are solar panels on the roof and a 600-gallon cistern to capture rainfall. The church is now one of the city’s “resilience hubs” to help its neighborhood cope with weather– or climate-related disasters.

“We’re in every way attempting to be a green church,” Martin said, and “to have a really light carbon footprint.”

That effort dovetails with the church’s expanding outreach to the community, explained Yorrell Tuck, operations director for the nonprofit that Stillmeadow started to provide services to its neighbors.

In addition to the Forest Service and  Chesapeake Bay Trust, the church is getting help with the park development from state and local government agencies and from a coterie of nonprofit groups, including Blue Water Baltimore, Civic Works, Interfaith Partners for the Chesapeake and National Wildlife Federation.

The effort is also getting a lot of donated labor from students. Three groups of Baltimore area high schoolers recently helped clear felled trees and other debris from the woods and, by all accounts, had great fun doing it.

Some help is even coming from out of state.

McKay Jenkins, a Baltimore-based writer who’s a professor at the University of Delaware, has enlisted students from the Newark campus to pitch in on a weekly basis. He learned about the peace park project through Interfaith Partners, where he serves on the board, and saw it as a great way to teach his students while also helping the church.

“I’ve got legions of students coming down and learning everything from environmental justice to ecology,” he said.

Once the ash trees are cleared, the partners plan to converge at the church to plant the new trees. There are 1,100 cuttings in pots already on site, and another 2,000 are due to be delivered.

Similar efforts are under way to rehabilitate urban forests in places like Philadelphia and New York City, Jenkins and Grove pointed out, but none quite like this.

“If you can prove you can reforest with hybridized fast-growing trees,” Jenkins said, “maybe you can do this all over.”

But the forest is already functioning as a peace park, Martin stressed. A christening that took place amid the pandemic last fall drew more than 100 people, including neighborhood residents and project partners.

“This park started organically, and we built relationships,” he said. Recalling the crowd gathered that day, he said, “It looked like America. It looked like heaven.”