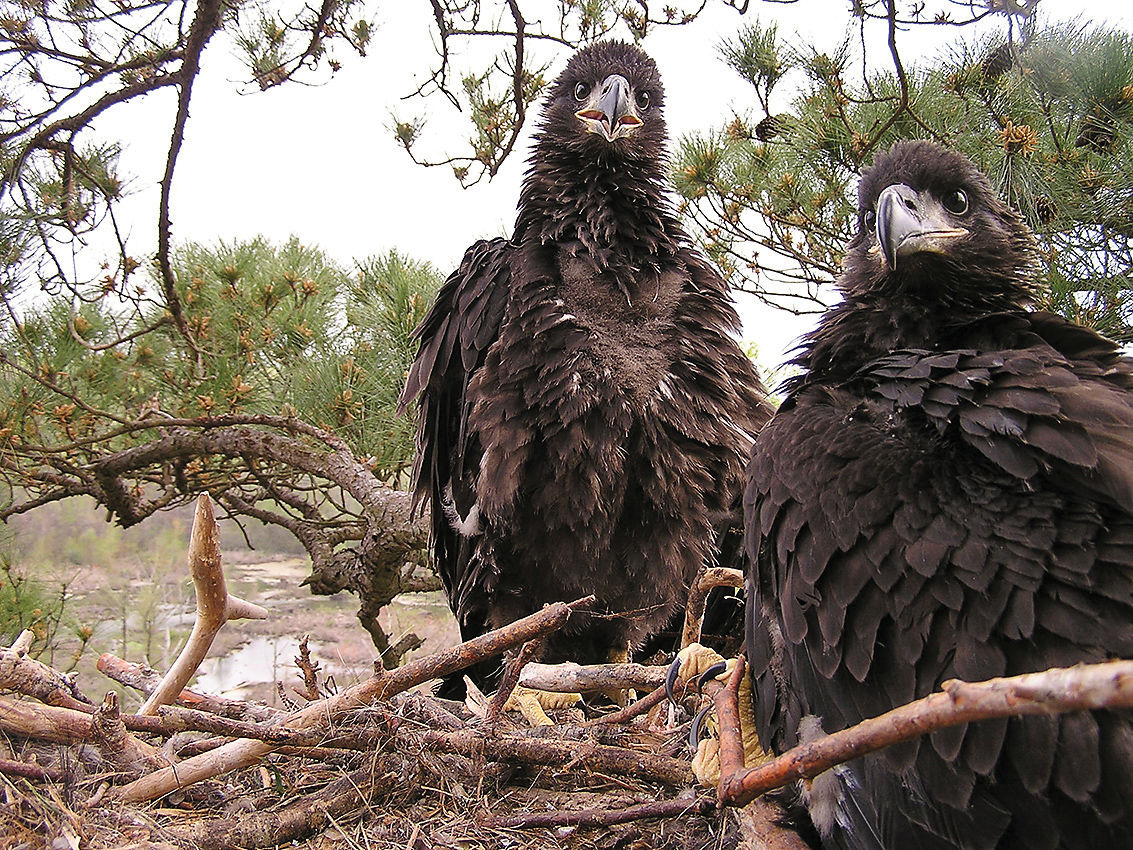 A two-eaglet brood like this one is harder to find along portions of the James River. As eagle density in the region grows, pairs find it harder to support larger nests while competing for food and territory. (Photo provided by Bryan Watts) 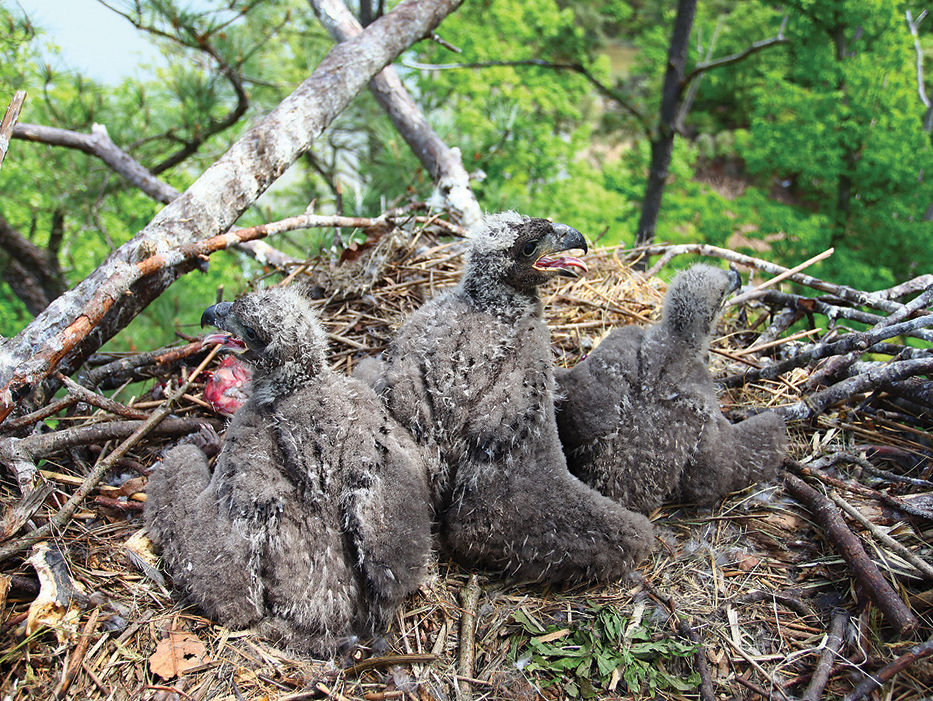 Three-eaglet broods like this one have become less common along portions of the James River in Virginia. As eagle density in the region grows, pairs find it harder to support larger nests while competing for food and territory. See article on page 17. (Photo provided by Bryan Watts) 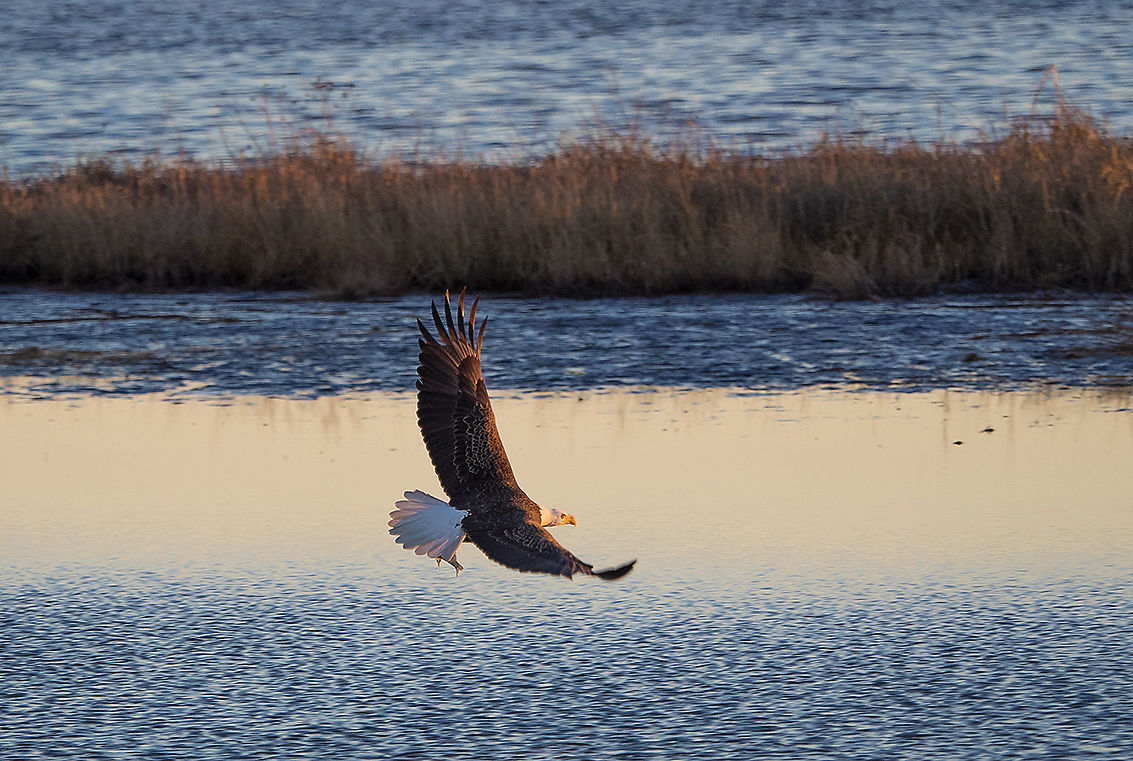 Aerial surveys tallied more than 300 breeding pairs of eagles along the James River for the first time in 2019 — a number that had been the species’ recovery goal for the entire Chesapeake Bay watershed. 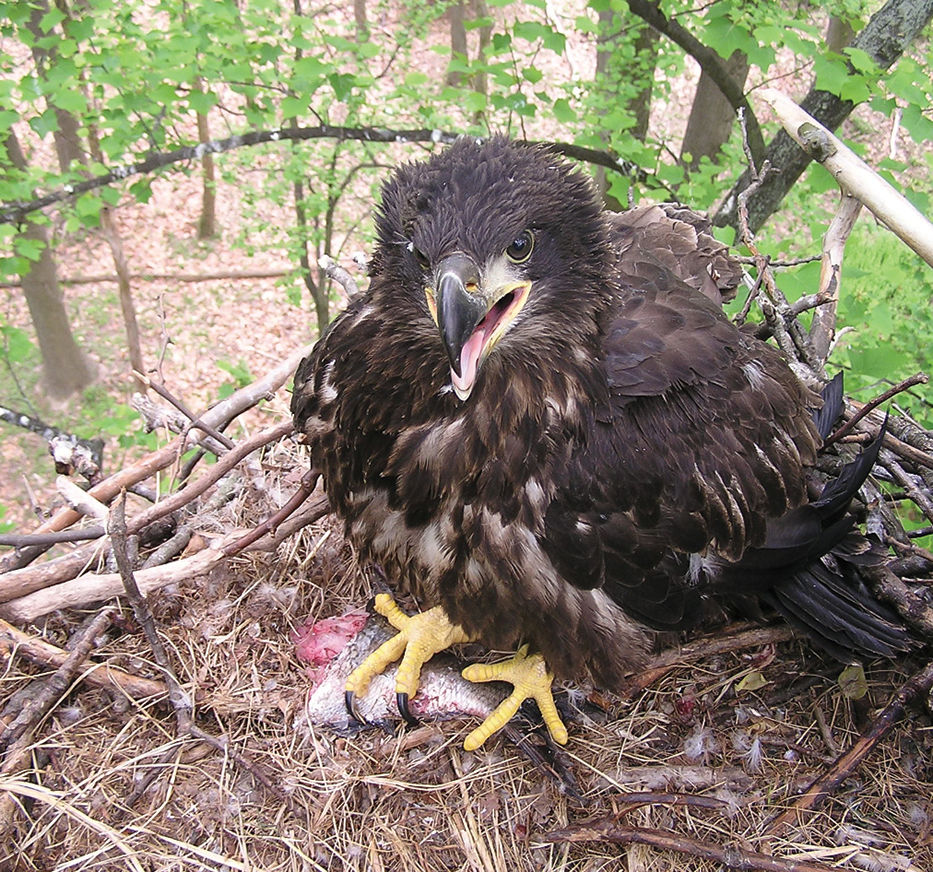 An eaglet not in the mood to share its dinner is pictured along the James River in Virginia. The river's mix of salt– and freshwater fish offer bald eagles a variety of food in a short distance. (Photo provided by Bryan Watts)

In the late 1970s, the treetops of the James River looked like a ghost town. Despite plenty of suitable habitat where bald eagles could have been nesting and had before, the waterway was the only major tributary in the Chesapeake Bay whose nesting population of the iconic American predator had plummeted to zero.

Imagine biologists’ surprise when, four decades later, that same river became the staging ground for the eagles’ astonishing comeback. Aerial surveys tallied more than 300 breeding pairs of eagles along the James River for the first time in 2019 — a number that had been the species’ recovery goal for the entire Chesapeake Bay watershed.

Biologists estimate there are now close to 3,000 nesting pairs Baywide, but surveys of the entire region no longer occur annually. Maryland stopped surveying bald eagles in 2004 when they hit nearly 400 breeding pairs statewide, surpassing population goals. The Pennsylvania Game Commission began asking the public in 2019 to help count the number of nesting eagles in the state, which had surpassed 300, creating a website for public input.

The James River aerial surveys, though, have taken place every year since 1962 — and they continue, in part, so biologists can better understand the full curve of a bird population’s recovery.

The 2020 aerial survey of the river, conducted in February and March, indicated that the eagle population continues to grow, though at a slower rate as it begins to stabilize after decades of rapid recovery.

“We never expected the James River population would reach these types of numbers,” said Bryan Watts, who’s been conducting the survey for nearly 30 years as director of the Center for Conservation Biology, a research arm of the College of William & Mary and the Virginia Commonwealth University.

On the plane with him each year is professor and co-founder of the center, Mitchell Byrd, who’s in his 90s and has conducted surveys on the James for nearly 45 years, including when there were no nesting pairs of eagles to count in 1977 and 1978.

Now, Watts said, “It’s hard to keep up with the pairs.”

Early in the 1970s, two seminal pieces of legislation set the stage for the eagle’s comeback, both locally and across the country. The federal government in 1972 outlawed the widely used pesticide DDT, which caused eagles to lay thin-shelled eggs that cracked before the chicks could hatch. The next year brought the Endangered Species Act, with additional habitat and population protections for the birds.

Over the decades, the bald eagle’s recovery nationwide has been so robust that it was delisted as endangered in 2007. The birds are still federally protected, though, by the 1940 Bald Eagle Protection Act, which added golden eagles to the measure in 1962.

“If you go back in time, there was a long parade of insults [against eagles.] The last one was DDT. It just pushed them to the limit,” Watts said. “There’s no doubt that respect for eagles played a major role” in their protection.

Water quality improvements set into motion in the 1970s likely helped the recovery, too.

Nesting on the James

Researchers focused on bald eagle populations in the Chesapeake in the mid-1950s had a hunch that the region could be one of the last strongholds for the entire East Coast population.

Jack Abbott, an amateur naturalist who worked for the military at Fort Belvoir, conducted the first aerial survey to count bald eagle nests in the region in 1962, logging his observations in parts of Virginia and Maryland until passing on the job to the states’ natural resources agencies in 1977. Abbott pegged Jamestown Island as the hub of eagle breeding because it had three nests — the highest density at the time. Watts thinks he may have been onto something.

Today, “there’s no question that the Chesapeake Bay is a huge fountain of eagle production flowing to the surrounding states,” Watts said. But “no one could have anticipated the heights we’ve reached.”

The number of nesting pairs of eagles near the James River has grown 8–10% each year since the first newborn chick appeared in a nest in 1979 through the 2010s. Now, that growth rate is beginning to slow, but Watts said that’s an indication that it’s stabilizing.

The James River is a focal point of the bald eagle monitoring effort for a few reasons: The annual count of the number of nests and the number of chicks in them has been ongoing for nearly 60 years on this river, making it a rare and valuable dataset in the world of bird counts. The river also was the only major Bay tributary whose population of nesting bald eagles got down to zero during the ’70s.

The winding river begins in a freshwater stretch upstream of Richmond and shifts to saltwater over a shorter distance than other major Chesapeake tributaries. This means an eagle on the wing can feed on a wide variety of fish close to its nest on the tree-lined shores — which, today, are teeming with eagles.

This year’s survey results were still being confirmed during April, but Watts estimates that there are approximately 310 nesting pairs of eagles along the James.

In the 2000s, when there were half as many nests, many of the pairs would have had two or three chicks begging for food during the March surveys.

Today, most nests have just one chick despite having laid more eggs.

That’s because maturing eagles now have more competition for food and nesting habitat, Watts said. An adult male, for example, has to split his time between gathering food for the brood and protecting the nest from “floater” eagles who have not yet found a territory of their own in the increasingly crowded treetops. A similar phenomenon has played out in regions such as Alaska, where bald eagle populations remain robust, and competition keeps most nests to one chick apiece.

“It is this behavioral feedback that will bring the population into balance with the available space,” Watts said. “This is the last chapter of the recovery and why we continue to monitor down here.”

Eagles without a territory can either compete for those that do exist — picking fights with their own species or with other large birds, such as ospreys and blue herons, over limited resources — or they can take flight for another, less populated region. Watts said both are happening with the Chesapeake population, which has been a source of growing eagle populations along the East Coast.

It’s difficult to compare today’s eagle population with historic levels for the region. The first recorded survey of bald eagles in the Chesapeake Bay was a ground survey conducted in 1936 that covered a quarter of the available habitat in the region. That survey was used to project that the Bay region was home to between 600 and 800 breeding pairs at the time — and it was used to set recovery goals for the entire Bay, which have long since been surpassed.

One of the reasons that goal might have been too low is that it assumed eagles would only populate areas with little to no human disturbance.

“It turns out, that’s not really the case,” Watts said.

Eagle populations continued to grow through the 1990s despite a period of suburban expansion and, it appears, they acclimated. Today, eagle nests are not uncommon in the treetops of some neighborhoods — even those they had once vacated when the pickings for nests were more plentiful.

“We believed back in the ‘80s that land was a zero-sum game — we either give it to the eagles or to humans,” Watts said. “The lands we thought were off-limits to eagles have now been colonized. Maybe the future between us two species is not as dire as we once thought it was.”