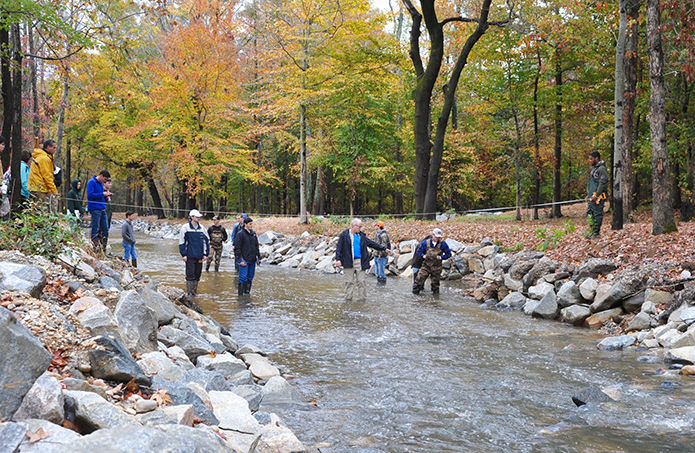 Students from Randolph-Macon College take measurements in a newly reconstructed portion of Mechumps Creek. Riprap on the stream’s edges prevents erosion while regenerative wetlands along each side allow high flows of water to naturally filter out pollutants. 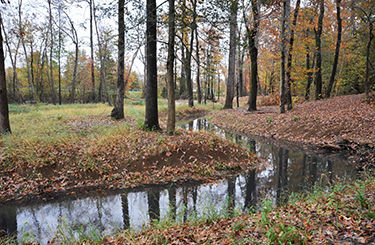 A regenerative wetland looks like another branch of the stream as it pulls away from the main channel to provide a place for water to naturally filter out pollutants before returning to Mechumps Creek. 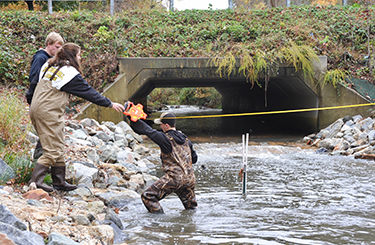 Kyle Nason, a freshman in an environmental problem-solving class at Randolph-Macon College, hands a measuring tool to Emmy McGurk, another freshman in the class. The students measured the amount of nutrients in the water to determine a baseline for long-term monitoring. 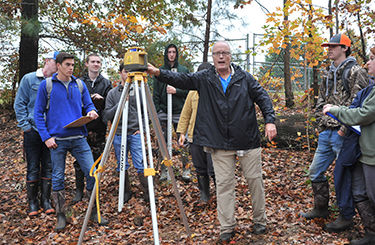 Charles “Chas” Gowan, an environmental studies professor at Randolph-Macon College, demonstrates to his students how to survey the landscape near Mechumps Creek. They are the first class to begin five years of monitoring on a newly re-engineered portion of the creek.

When his mother asked him what he got on his final exam, an environmental studies student at Randolph-Macon College gave her an unexpected answer: “$100,000.”

Technically, he wasn’t lying. As a member of Professor Charles “Chas” Gowan’s 2007 class, the student’s final exam was to present to the town council of Ashland, VA, a plan he and his classmates created to restore a degraded reach of Mechumps Creek that runs just south of town. The council was so impressed with the students’ plan that it gave the college $100,000 to start the first project.

Mechumps Creek (pronounced MUH-chumps or MEE-chumps, depending on whom you ask) is a tributary of the Pamunkey River, which runs into the York River and, in turn, the Chesapeake Bay. Like many suburban waterways, the stream originates on the backside of the town’s retail corridor, draining the roofs of a Chick-fil-A, Walmart Supercenter and countless parking lots in its first half mile.

In the early 2000s — when Gowan first made the Mechumps a makeover project for the college’s environmental students — there was little regulatory incentive for the town, located 15 miles north of Richmond, to prioritize cleaning up its beleaguered creek. The state considers most of the waterway impaired by E. coli bacteria, and its unstable streambed was sending sediment pollution downstream during heavy flows.

It was “purely a learning experience for the students,” Gowan said.

For Ashland, working with the college — and its willing labor force of students — has brought additional grant funding to bear on the project and allowed for real-time and long-term monitoring.

“The amount of knowledge they’re bringing to the table is invaluable,” said Clancy Addington, Ashland’s project manager, of the college professor and his students. Because of their monitoring work, “we were able to see real-time effects of the work we had done. That changed some of our design for downstream projects.”

Today, the projects that those students started are being carried on by other students — and helping Ashland to meet its pollution reduction goals and permit requirements for the Chesapeake Bay. The initial $100,000 from the town led the way for projects on the Mechumps to receive another $500,000 in grants from federal and private sources, including the Dominion Foundation, with town staff providing assistance along the way.

On its own, the town would not have been eligible for some of the private grants the college received for the project from the National Fish and Wildlife Foundation. Gowan said the college also wouldn’t have qualified for the public matching funds received from the Virginia Department of Environmental Quality’s stormwater local assistance fund.

“From my perspective, municipalities should look for partners on these projects, and colleges and universities are a good choice,” Gowan said. The colleges “have to see a way to work the partnership into either their teaching or faculty research. For me, it’s a bit of both.”

Nearly 200 Randolph-Macon students have worked on some aspect of the stream restoration project over the years. Many of them participate while taking Gowan’s environmental problem-solving course.

Gowan and his students first began working on the Mechumps in 2003 when they crafted a watershed management plan for the creek as part of their coursework. The next year, they built a half-dozen rain gardens around the college’s campus, located in an otherwise residential area near the center of the town.

In 2007, after getting the $100,000 in seed money from the town, the college began working with the local branch of an engineering consulting firm, now called Stantec, to break ground in the streambed.

The first of three potential phases of the project entailed rebuilding a 1,200-foot stretch of the stream. The goal was to create a more stable channel that would be less likely to erode when water, gushing off nearby roofs and parking lots, careens down the creek.

The work also widened the creek’s floodplain to allow water to expand over a broader area and used submerged logs in the stream to provide habitat for aquatic insects and fish.

Eight years after it was completed, trees along some portions of the reshaped stream have grown so thick that it’s difficult to get through them to find the main channel. And the project has survived its fair share of storms, including rains so heavy in May and June of 2018 that they caused the subbase under a bridge crossing the creek to wash away.

“They had to get a crane to lift the bridge and reload the gravel under it,” said Josh Running, a senior project manager at Stantec. “That’s how fast this stream can go.”

The other benefit of working with students on stream restoration? Having a perennial source of boots on the ground after a project is completed to make sure it’s still working. Randolph-Macon students have been regularly monitoring the Mechumps’ recovery since the first phase of work ended in 2010, collecting data on its benefits for pollution reduction, habitat creation and aquatic life.

Tom Schueler, executive director of the Chesapeake Stormwater Network, said that having that kind of monitoring capacity is still unique and one of the reasons the first phase of the Mechumps project earned a third-place award from his organization’s Best Urban BMP in the Bay Award (BUBBA) contest.

“I’ve been reviewing NFWF proposals for the last seven years, and maybe 5 percent of all proposals have a good monitoring plan. This one did,” Schueler said. “That kind of long-term commitment to how a stream is behaving before and after restoration provides really priceless data, in my view.”

Gowan also considers the data the students have been collecting invaluable. It showed that the first phase of stream work had accomplished what it set out to do, stabilizing the channel and restoring some ecological life to that portion of the stream. Fish populations doubled from prerestoration levels and the American eel, absent for decades from this part of the stream, reappeared. But the improvements seemed to be hitting a ceiling, and the stream wasn’t faring as well as they knew it could.

“The habitat was fixed, but [the stream] was still draining roofs and parking lots and roads and getting all that runoff,” Gowan said.

On the other side of a bridge spanning the Mechumps, a second, more expensive phase of the project unfolded to not only help stabilize the stream but also improve its water quality. The project, which wrapped up construction in the fall, attached “regenerative wetlands” to the stream. The wetland areas act as overflow channels that can receive the water during heavy flows and filter out pollutants before the water runs back into the main channel.

Managers hope the project will demonstrate the effectiveness of this approach, but proving that takes data. On a morning in early November, students from three Randolph-Macon classes began collecting it.

A half-dozen waded hip-high into the creek, flowing at a quick clip after a morning rain, to measure how quickly the water was moving and the amount of nutrients it carried.

Kyle Nason, a freshman in Gowan’s environmental problem-solving class, volunteered to jump into the water to walk a measuring tape across it. He said the project has caused him to rethink what he wants to do for a living.

“I’m definitely seeing how much there is to do” in this field, Nason said. “People actually do want to make changes in their environment, so it will last. I believe there’s a huge market in the economy for that work.”

Addington said she also benefitted from the experience she gained as a student before she started working for Ashland. She attended the Chesapeake Bay Governor’s School for Marine Environmental Science in Tappahannock, VA, before studying environmental science at Virginia Tech University. Now, she gets to see how student work can benefit a town, too.

Without the help of the college, “we could have done [these projects],” she said, “but we would have been up against so many more obstacles.”