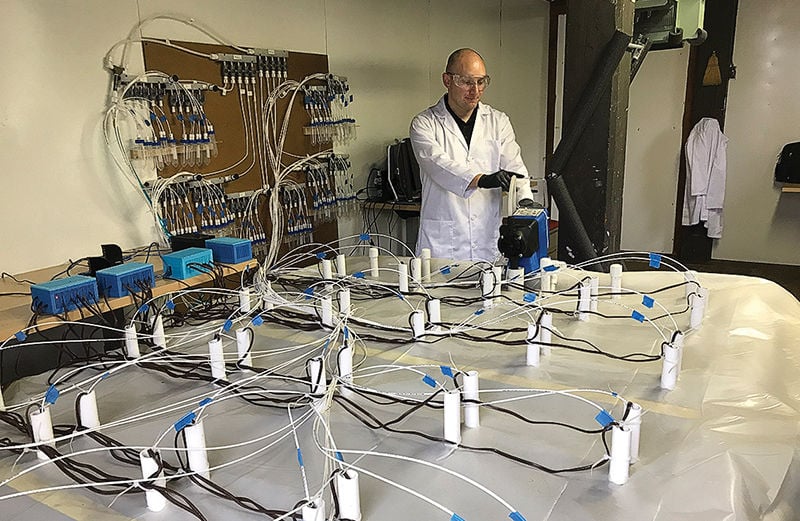 Brian Shedd, a geologist with the Baltimore District of the U.S. Army Corps of Engineers, uses a scale model of an aquifer to test the flow of contaminants through soil and groundwater. 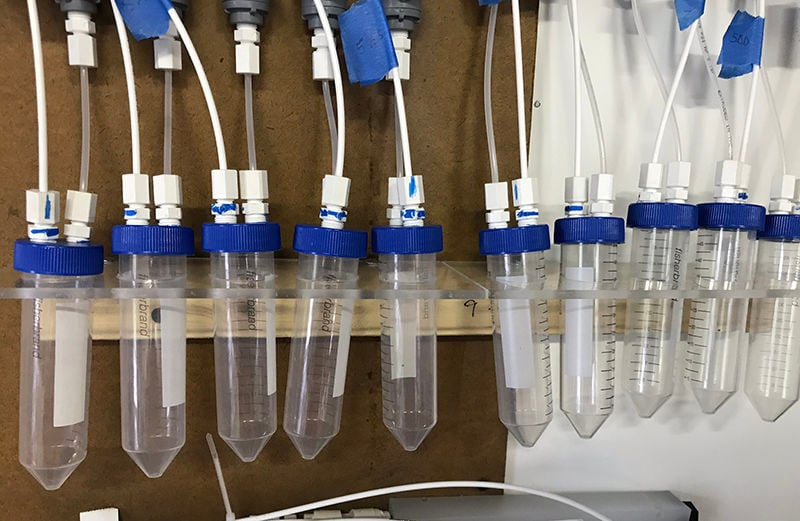 Vials mounted on the wall are used to collect samples from the monitoring wells. The samples are taken to the University of Maryland, Baltimore County, which has sophisticated equipment capable of identifying contaminants and their concentrations in the collected liquid. (Timothy B. Wheeler) 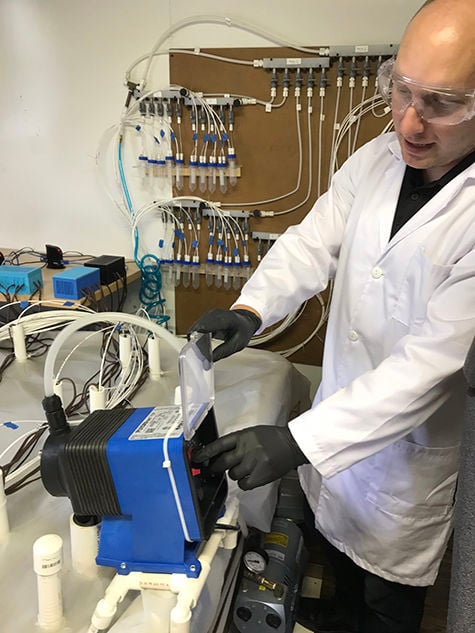 Geologist Brian Shedd of the Baltimore District of the U.S. Army Corps of Engineers checks a pump that controls the flow of water through the model aquifer.

Brian Shedd has been spending time this year in a musty old brick building on Baltimore’s waterfront, where he’s hoping to unlock the secrets of a troublesome family of toxic chemicals contaminating water supplies across the United States.

Shedd, a geologist with the U.S. Army Corps of Engineers Baltimore District, set up a laboratory in the 19th century structure, which once served as a guardhouse and ordnance storehouse on the grounds of Fort McHenry, the historic harbor fortress that played a starring role in the War of 1812.

There, in a small compound just outside the walls of the national historic monument, the Corps’ Baltimore District docks a small fleet of vessels used to survey shipping channels and clean up floating debris, among other tasks.

For Shedd, it offered a great location for studying per- and poly-fluoroalkyl substances, known as PFAS. That’s because it was built long before the 1950s, when the chemicals began being manufactured for use in a host of consumer and industrial products. Thus, the site was relatively free of the contamination that has since increasingly turned up in many places — including drinking water, foods and people’s bodies.

PFAS have been particularly problematic for the U.S. Defense Department, because the chemicals are in the fire-fighting foam that’s been used for decades by the armed services. Many of the more than 600 sites nationwide — including at least 18 in the Chesapeake Bay watershed — where PFAS compounds have been detected in groundwater are on or near military bases.

Exposure to PFAS may affect fetal and child development, including changes in growth, learning and behavior, according to the U.S. Agency for Toxic Substances and Disease Registry. They may also lower fertility and interfere with natural hormones, raise cholesterol, affect the immune system and even increase cancer risk.

At the request of dozens of members of Congress, the Pentagon’s inspector general has agreed to review the military’s history of PFAS use, how it handled the risks of exposing service members and their families and what is being done now to assess and resolve the contamination. That report could be ready by early next year.

Though the Pentagon has taken steps to reduce its use in recent years, the PFAS-laden “aqueous film-forming foam” had long been sprayed liberally during training exercises or while suppressing actual blazes.

Shedd, working in collaboration with researchers from the U.S. Geological Survey and University of Maryland, Baltimore County, is trying to better understand how PFAS compounds move through and linger in the soil once they soak into the ground. The hope, he explained, is to help the military, industry and affected communities figure out how to contain and clean up the contamination, which so far is resisting easy solutions.

“I think there’s a lot of opportunities here for us to refine the process of investigation and remediation,” Shedd said.

The DOD Strategic Environmental Research and Development program is supporting the study with a grant of nearly $200,000. It’s just one piece of a wide-ranging research effort by military and civilian experts to learn as much as possible, as quickly as possible, about the many PFAS chemicals in use — estimated at anywhere from 3,000 to 5,000 — which do not all act alike.

Many of the PFAS chemicals are resistant to water and oil – which is what made them ideal for suppressing fuel fires at military bases and airfields. Nevertheless, they’ve migrated via groundwater from sites where foam was sprayed and soaked into the ground.

“The PFAS compounds are very complex, and understanding their behavior in the environment is also very complex,” Shedd said. “It’s very difficult to unpack all that complexity.”

Shedd said he hopes this research can get a handle on how the contaminants interact with the soil and groundwater – how quickly they move and how much lingers.

Inside the old building, he built a scale model of an aquifer in a tank measuring roughly 8 x 6 feet. He partially filled it with uncontaminated sandy soil obtained from Fort Drum, an Army installation in New York, then pumped water through it to simulate the movement of groundwater in the environment. To track the subsurface flow, he installed a grid of tiny monitoring wells throughout the tank.

Shedd first tested his model aquifer by injecting a water-soluble tracer chemical to see where and how quickly it spread through the tank. Then he injected a mixture of PFAS compounds.

He then installed a system to sample the mock groundwater as it moved through the tank, pumping it to a set of tubes, one for each monitoring well. The collected liquid samples went to be analyzed at the laboratory of Lee Blaney, associate professor and environmental engineer at the University of Maryland, Baltimore County.

Blaney, who specializes in studying contaminants, is set up to analyze PFAS to the specifications of the federal government. He uses two sophisticated instruments to identify and measure the ingredients of complex chemical mixtures down to minute levels.

PFAS compounds are “very hard to work with,” Blaney said. Because they’re generally present at very low levels in water samples, he noted, “A little bit of contamination can throw off measurements.”

For that reason, rigorous precautions have to be taken to avoid cross-contamination of the water samples. When working with PFAS, labs must avoid using plastic beakers, tubing, vials and other often-standard equipment that might have anti-stick coatings that contain PFAS. Researchers must triple-wash their clothing and avoid wearing any PFAS-treated stain- or water-repellent fabrics. No sticky notes allowed — they may harbor PFAS. They shouldn’t apply sunscreen or insect repellant for the same reason, and eating in the lab is prohibited, because food wrappers may also contain PFAS.

The analysis of the samples takes time. Shedd said he hopes to have results later this fall. But as he was running the first round of tests, he said researchers noticed that more of the PFAS molecules injected into the model aquifer stayed put in the tank than they’d expected. The next round of testing aimed to find out why.

The results may help clarify which PFAS compounds or mixtures stick to the soil and which ones move more readily in groundwater. Shedd said what he and colleagues learn will be shared publicly so it can inform future cleanup efforts.

“There’s a lot of developing science relating to [individual chemicals],’” Shedd said, “But in terms of complex mixtures, how all that works, that’s not as well understood.” And since these compounds rarely exist in isolation, he added, “That’s part of the challenge the research community and environmental practitioners are up against right now.”