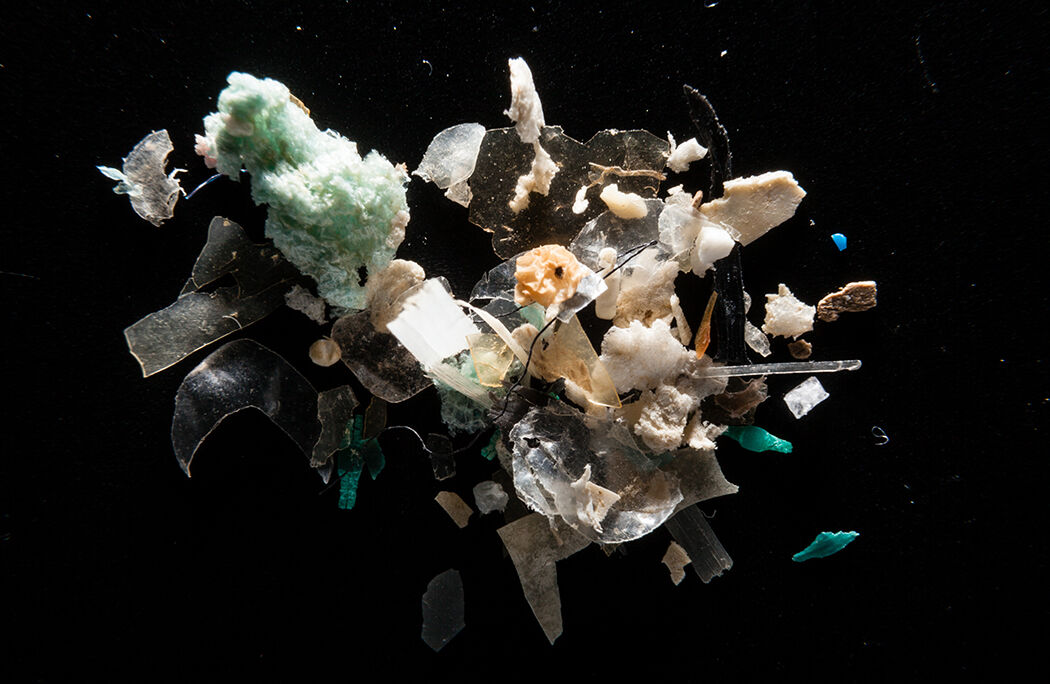 These microplastics from the Corsica River in Maryland were photographed at a laboratory at the University of Maryland’s Department of Environmental Science & Technology. 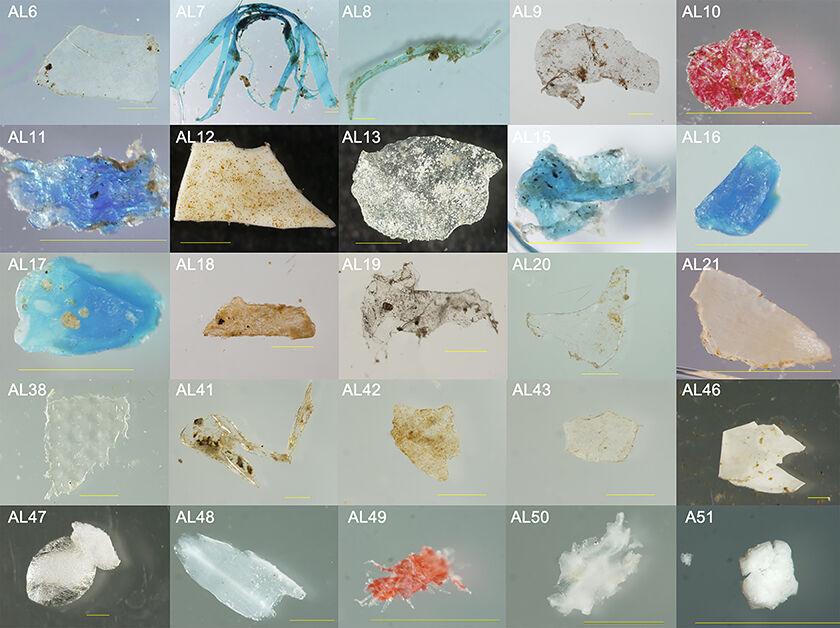 These microplastics collected from surface waters of the Elizabeth River in Virginia were photographed with a stereo-zoom microscope/camera. (Amanda Laverty/Virginia Sea Grant, CC BY-ND 2.0) 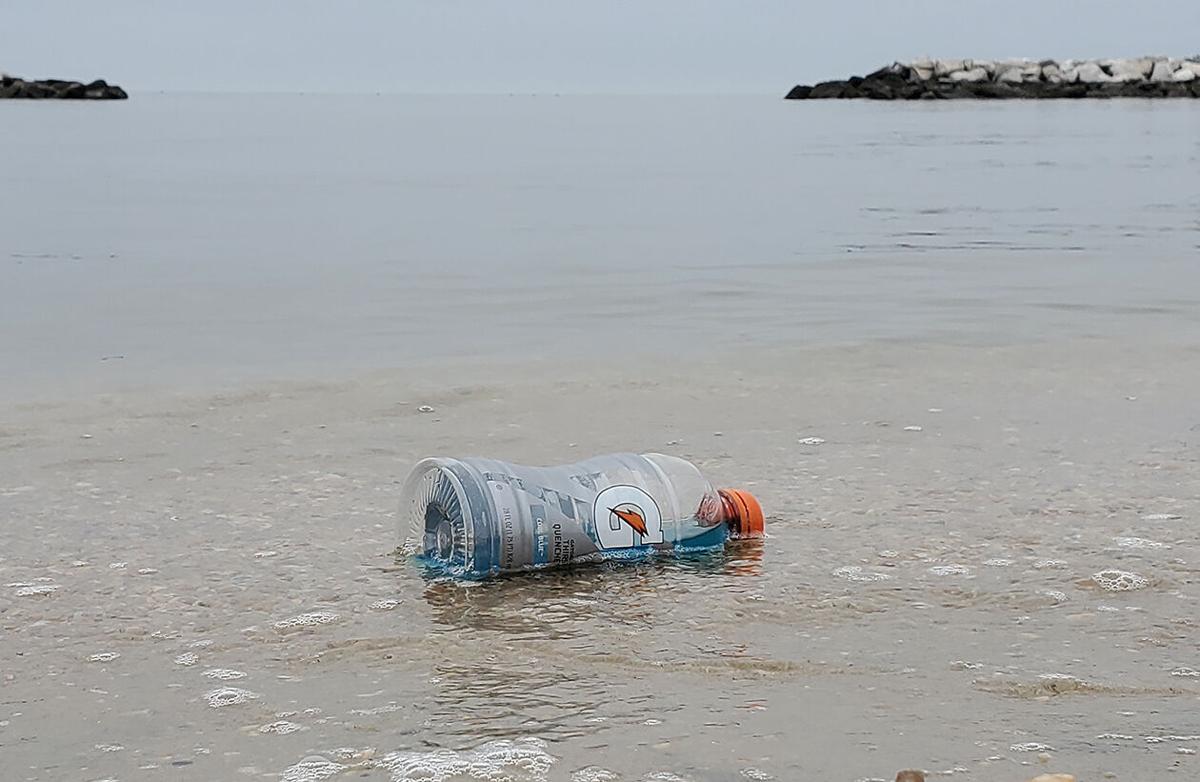 A discarded plastic bottle floats near the shore of the Chesapeake Bay. Over time, plastic products like these disintegrate into vanishingly small particles, called microplastics, which are known to affect marine life.

The vast majority of plastic pollution that makes its way into the rivers of the Chesapeake Bay stays in and along local waters and is not, as researchers put it, “exported” to the ocean.

This was among the findings of a modeling exercise conducted by researchers from Pennsylvania State University with the help of the Virginia Institute of Marine Science. The scientists wondered why the amount of plastic particles entering the ocean appeared to be considerably less than what runs off of the land in places like the Bay watershed. What, they asked, is happening to the rest?

They suspected that the Chesapeake Bay — which has long been a swirling sink for other types of pollution — could be functioning as a catchall for plastics, too. But the conclusions still surprised them.

The model results indicated that about 94% of microplastics — particles measuring 5 millimeters or less in diameter — fed into the system via its rivers stayed in the system, most likely on or along the shores. About 5% of the particles were carried from the Bay to the ocean and 1% remained suspended in the water column.

Half of these microplastics were deposited onto shorelines within a week or two, and most washed up not far from where they first entered a tributary.

“We were expecting more export out onto the shelf,” said AlexanderLópez, a postdoctoral researcher at Penn State and the study’s lead author. “No one talks about, ‘Oh, there’s so much plastic in the estuaries.’ They talk about ocean beaches. The fact that we saw so much retained in the estuary, we thought, ‘Hey, that’s significant.’”

Matt Robinson, environmental protection specialist for the District of Columbia’s Department of Energy and Environment and a co-chair of the Bay Program’s plastic pollution action team, said the study is relevant to the broader effort under way to better address plastic pollution in the watershed.

“The fact that stuff doesn’t get pushed out into the ocean — that we’re retaining plastic — is a big find,” Robinson said. “It potentially means there could be serious effects of plastic on Bay ecology.”

Nearly every survey looking for plastics in aquatic systems has found them. But researchers are just beginning to understand what that means for local habitats and species. This modeling study could help direct those efforts by pointing out where the bulk of small plastics are likely remaining.

Meredith Evans Seeley, a doctoral candidate at the Virginia Institute of Marine Science, said it definitely dovetails with the work she’s been doing.

Seeley’s research focuses on how microplastics impact the ability of organisms in estuary systems to do their jobs. Estuaries are where a lot of the action takes place, serving as nurseries for fish and crabs, regulating runoff from the surrounding landscape and cycling nutrients before they reach the ocean.

“All these organisms have different roles in the ecosystem, and if we add plastics and change what organisms are there, we’re changing the function they have for the environment,” she said.

A recent study by Seeley found that the presence of particular kinds of microplastics reduces the number of organisms that process certain nutrients, especially excess nitrogen, in coastal marshes. Nitrogen commonly enters water from the air, nearby agriculture or wastewater effluent. Too much can lead to severe imbalances in the local and regional system.

The presence of certain microplastics, in this case, made the habitat she was studying “less of an effective buffer against nutrient pollution,” Seeley said.

López’s modeling work, Seeley said, confirms their hunch that coastal marshes are likely recipients of large amounts of microplastics that enter the region’s waters. There are dozens of other variables to consider — how large the plastics are, what type they are, their buoyancy and the volumes that are present — which both researchers said points to the need for additional surveys and monitoring to inform scientific work.

“We are trying to get more people to use this as a foundation to go out and collect more data,” López said.

The Penn State model could also be better informed as more data is available. The model used 5 millimeters as the fixed size for microplastics, but in the real world anything between 1 micron and 5 millimeters in size would be considered a microplastic. When it comes to how far a plastic particle travels and where it is deposited, buoyancy seems to be more of determining factor than size. Items that float travel farther, while ones that sink stay closer to the source.

López said the research included running the model in a range of years with more or less rainfall than the main year of study, 2010, but those variations didn’t dramatically alter the findings. The model also didn’t take into account the number of microplastics that might be ingested by fish or other animals.

Still, these preliminary findings indicate that the Bay’s ecosystem could be bearing the brunt of microplastics that enter it, rather than conveying the bulk of them to the ocean.