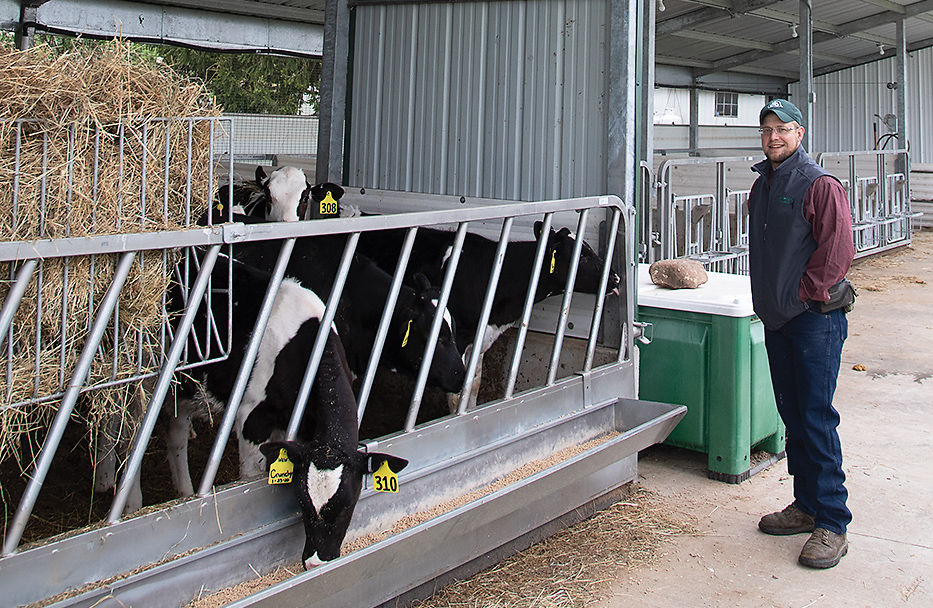 Chris Landis, a seventh generation farmer in Lancaster County, PA, attends to his calves in their new barn. The structure, which captures manure and stores it, thereby preventing runoff, was partly financed by a project started by Turkey Hill Dairy to make sure its dairy farmers are farming sustainably. 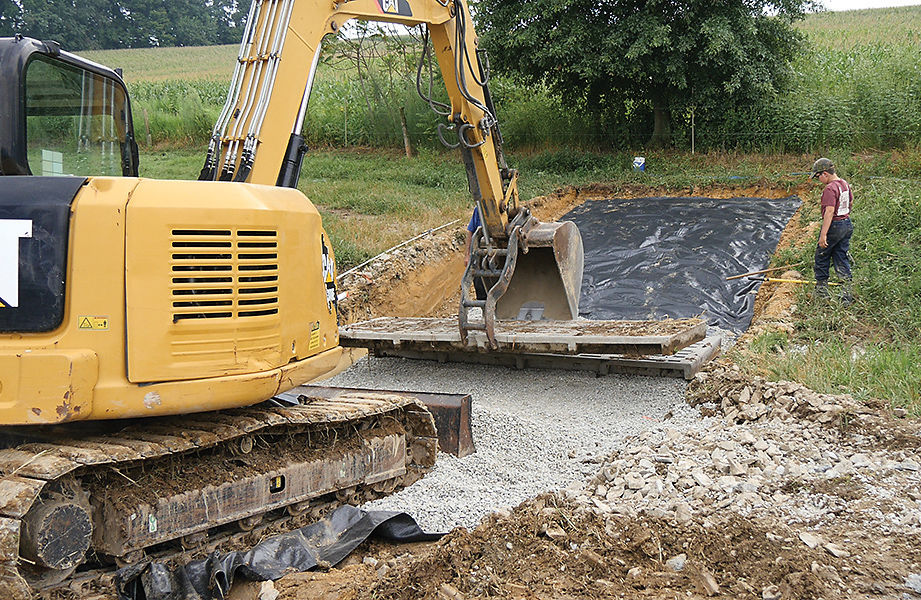 A stream crossing for cattle is installed on a farm in Lancaster County, PA. Financial aid from corporations increasingly is being funneled to farmers as consumers demand that products come from sustainable agriculture. (Maryland & Virginia Milk Producers Cooperative Association)

Chris Landis, a seventh-generation dairy and organic poultry farmer in Lancaster County, PA, had been up until 1 a.m. cutting hay by headlight to beat forecasted rain. Because dairy cows wait for no one, he was up again about four hours later, milking them. Then he grabbed a broom and pushed fallen hay on a concrete runway back within eating distance of Holstein cows in the farm’s new heifer barn.

The 32-year-old farmer embraces the need for conservation on the farm — his father was among the first in the county to fence cows away from streams. He tore down the old lean-to barns because he could see that the manure inside them, sometimes mixed with rainwater, washed downhill into the grass, polluting a stream or filtering into groundwater.

Nearly half of the $150,000 required to build new barns with a manure and stormwater collection system was paid for by a program started by Landis’ corporate boss, Turkey Hill Dairy, the well-known maker of milk, ice cream and iced tea. Another corporate icon, Perdue Farms, paid for a new pasture and shade for his free-range chickens.

Large corporations that do business in Chesapeake Bay states are spending unprecedented amounts of money to help supply line farmers like Landis combat air and water pollution. The growing trend is being driven by the demands of environmentally conscious consumers, as well as the companies’ investors and sometimes their employees.

The money is helping to fund on-the-ground conservation practices for dairy, grain, poultry and tobacco farmers in Bay states.

The approaches vary. Some livestock farmers are getting financial help to use feed that has fewer nutrients, which reduces the nitrogen and phosphorus in animal manure that pollute the Bay and its rivers. In Pennsylvania, a tobacco company paid to produce prototypes for horse-drawn, no-till planters that their Plain Sect growers could use to help reduce erosion. In another project, local ag retailers are trained to encourage clients to use cover crops, a practice that reduces nutrient pollution.

On the Delmarva Peninsula, corporations are paying to help poultry farmers transport excess manure out of the Bay watershed where it can be used on fields with less risk of water pollution.

Across the Bay watershed, corporations have paid for streamside buffers on farms and programs that promote soil health. Two power utilities have donated money to help dairy farmers in Virginia, Maryland and Pennsylvania switch from barnyard feeding to rotational grazing, which helps grasses store greenhouse gases.

And it’s not just on land. Northrop Grumman, a Virginia-based aerospace company, is working with the Chesapeake Bay Foundation to develop a tool to monitor oyster reef habitat.

A convergence of factors has led to a peak in corporate involvement in Bay states, experts say.

Perhaps foremost is a class of consumers in the digital age who are informed and demand that the products they buy be sustainably made all the way down the supply line.

“Doing the right thing by our environment is not disputable anymore. The vast majority of people want the business doing the right thing,” said John Cox, chairman of the board of Turkey Hill Dairy, which now requires 180 of its dairy farmers in Pennsylvania to have conservation and manure management plans and is helping to pay for needed best management practices.

“Consumers now want to know how their food is grown, and they want it more nutritious,” said Steve Groff, a Pennsylvania cover crop consultant. Groff’s clients include Wrangler Jeans, which wants its cotton grown sustainably.

In his upcoming book, The Future-Proof Farm, Groff notes that shoppers will soon be able to take handheld devices into grocery stores and point at an apple or cucumber and get a reading of the level of minerals and nutrients.

“They want to purchase products they feel good about,” said Kate Fritz, executive director of the Alliance for the Chesapeake Bay. “And they are willing to pay a little more.”

“They are buying with their pocketbook more and more,” agreed Jenny Ahlen of the Environmental Defense Fund, which has partnered with such retail giants as Walmart and Tyson’s Foods in on-the-farm improvements. “Companies are seeing real growth opportunities. They are finding from consumers what they want and that is becoming a great motivator.”

It’s now a world where a company’s environmental practices and stated goals receive unparalleled transparency, noted Turkey Hill’s Cox. If a company doesn’t deliver, chances are it will be called out. “The ability to hide your business behind platitudes is getting real thin. You can’t just run nice ads because your consumers will find out about it,” Cox said.

Among those to initiate the modern corporate environmental responsibility was Walmart, when the nation’s second-largest retailer in 2005 announced it would move toward zero waste, use 100% renewable energy and sell products that “sustain our resources and environment.” The company has required changes far down their supply line. It expanded its goals in 2013 to reduce nitrogen use on farms.

That set in motion other green initiatives by food and beverage companies.

But many corporations set environmental goals without realizing that it would take changes and money for improvements far down the supply line, said Lindsay Reames of the Maryland & Virginia Milk Producers Cooperative Association, which is involved in two partially corporate-funded projects to get conservation measures installed on dairy farms in Pennsylvania, Virginia and Maryland.

Corporations are increasingly hearing from stockholders and investors about sustainable practices. According to The New York Times, BlackRock, the world’s largest investment fund, has put companies on notice that it expects them to serve a social purpose.

And the younger workforce these days, containing many millennials, is demanding their employers go green. They are willing to relocate to places to join a company they feel good about, even if the job may pay less.

To gain credibility, many companies are partnering with environmental groups and nonprofits.

One is the The Sustainability Consortium, a nonprofit formed with seed money from Walmart in 2009 that helps companies launch and rate their sustainability practices. They have more than 1,000 partners all over the world.

“A lot of other nonprofits work on the consumer side. Because we are not consumer-based, the companies we deal with really are interested in changing some of their practices,” said Erika Ferrin, senior director of marketing, communication and development.

Another nonprofit helping corporations go green is the Environmental Defense Fund, the group that sued the federal government in 1965 in the eventually successful campaign to ban DDT. In the Bay region, the group has partnered with Walmart, Tyson’s Foods, Campbell Soup Co. and Land O’Lakes to guide green practices.

“There are often times that companies worry they wouldn’t be taken seriously if they do it on their own,” said Jenny Ahlen, the New York-based company’s supply chain director. “We can validate to some extent the action and results they are having on the ground.”

Landis noted that in a time when farmers are struggling financially, corporate assistance is welcomed. “It’s definitely piquing these guys’ interest,” he said. “I think it’s going to push somebody to pull the trigger on a project that they’re a little apprehensive about.”

Here are some environmental initiatives in the Chesapeake Bay region that involve corporations: